Why the Perso-Arabic Script Remains Crucial for Urdu

A script is the shield of any written language. Erasing a script, or migrating from one script to another, is the first step in destroying the essence of a language. 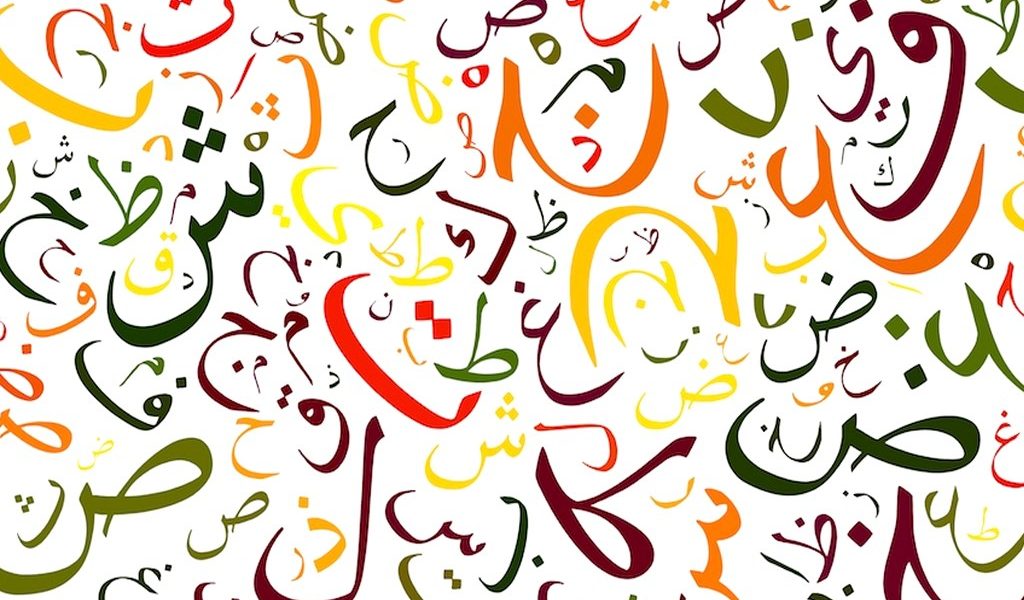 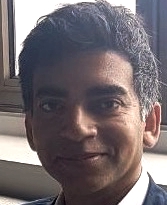 In the era of modern technology – dominated largely by English speakers in social and print media in India – voices are raised to do away with the Perso-Arabic script of Urdu in favour of Latinisation. This demand is not new. The first seeds of discord were sown by the British-Indian linguist, John Gilchrist in his book Oriental Fabulist (1803) when he pleaded for a single Roman script for languages “Hindoostanee, Persian, Arabic, Braj Bhasha and Sanskrit.”

Later, toward the end of the 19th century, another vehement attack was launched by many writers under the garb of nationalism, in favour of Nagari script in preference to the Perso-Arabic script. Post 2000, another wave of attacks was launched by English-centric Indian minds who wanted to share the legacy of John Gilchrist.

Their concern is also to metamorphose the outer crust of the ‘Desi’ language, and Urdu in particular, into the Latin alphabet. As for me, my concern is not ideological but ecological. The idea is to emphasise, valorise and preserve the language’s impact and its relationship with the environment; every script stores valuable information on the speech of past times.

English, as the dominant lingua franca, has inflicted huge losses on many local, ethnic and minority languages around the world. The Latinisation of many languages has already taken place and it is in progress for many more.

According to UNESCO Atlas of the World’s Languages in Danger, around 43% of the estimated 6,000 spoken languages are classified as endangered. If powerful, inner-circle languages such as English, French and Spanish are primarily to blame, ‘script-loss’ or shifting to another script brings in another kind of damage to languages, which not only leaves permanent scars, but also imposes a new identity with the new script. Subsequent to the Spanish conquest of the Mayan civilisation in the 16th century, the old hieroglyphic script succumbed to the advances of the Roman script. 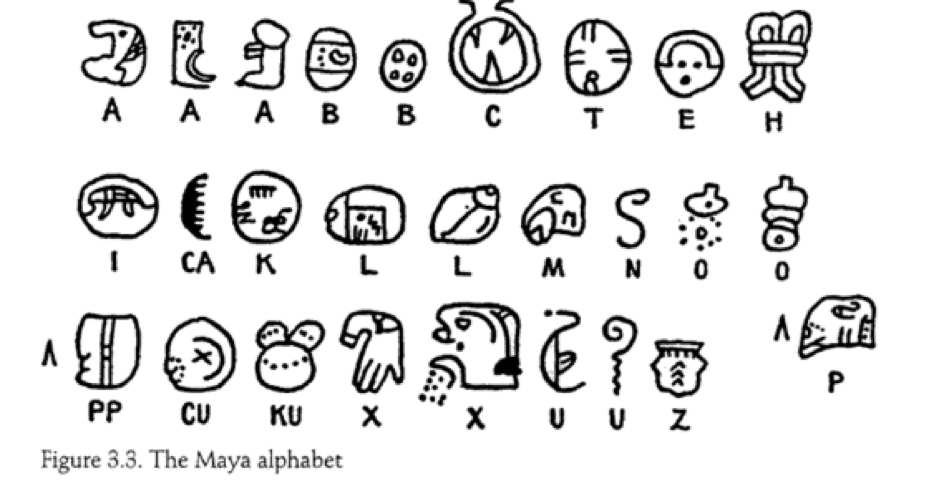 Credit: From The Decipherment of Ancient Maya Writing (Book published in 2001)

One can imagine the enormous cultural loss.

I present here the famous case of the Latinisation of the Turkish language.

Within a series of diverse reforms undertaken to modernise Turkey to the tune of Western civilisation, the military leader, Mustafa Kemal Atatürk imposed the Latin alphabet on the Turkish language in 1928. 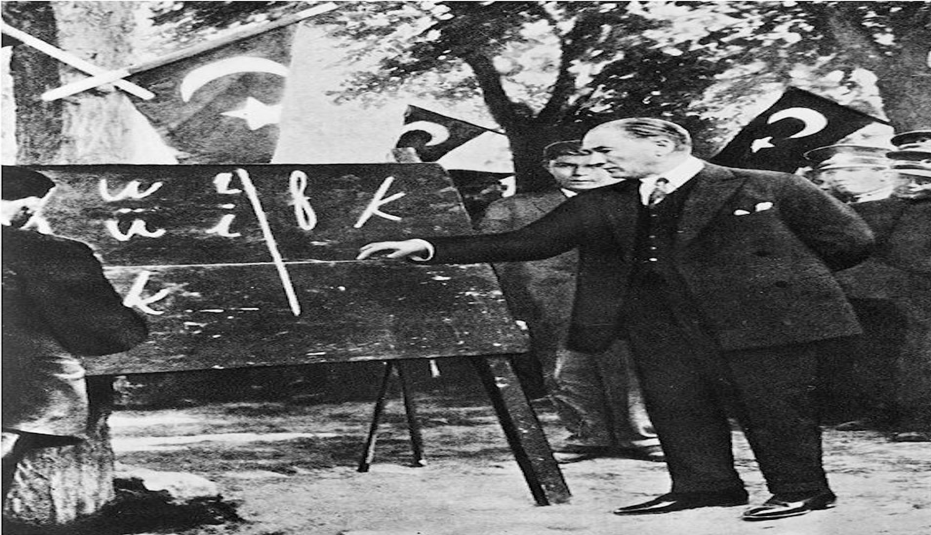 The shifting of script harshly alienated all future generations from their own rich literary and cultural heritage. No translation could bring the same flavour and feeling of the language. Hardly any scholarship was transferred into the new script. As time passed, rich heritage materials in the Ottoman alphabet gathered dust and were forgotten. Today, such is the sordid condition that no average Turk can read materials from the pre-1928 era.

The Perso-Arabic script for Urdu has been in use since as early as the 11th century, when it was claimed that its first author was Muhammad Sadi Suleiman, who penned some texts in Hindavi, although nothing has survived. Later, it encapsulated a hugely rich cultural capital from some of Amir Khusro’s rare 13th century collections in Urdu, formerly Dehlavi, from North India, and flourished in Vali’s era in South India in the 17th century.

The range of literary diversity, richness and evolution of Urdu during these 400 years was steadily maintained in the Perso-Arabic script. Likewise, the 18th, 19th and 20th centuries witnessed Urdu literature at its zenith – with poets like Mir Taqi Mir, Ghalib, Iqbal and Faiz Ahmad Faiz. Efforts should be made to preserve its original script.

To say further that Ghalib or Iqbal would have produced the same marvels in their writings with any other script, would be like providing them with another tool, which lacks the specificity of the sounds of the Urdu language – its hybrid, potent and varied tapestry – and lacks the same architecture of writing. Are all these factors conducive to creating exactly the same kind of product? And, as C.M. Naim, an American scholar of Urdu, once asked, “would Hindiwallah include Ghalib, Iqbal and Faiz in the Hindi canon if they had changed the script?”

Pakistani scholar Tariq Rahman, mentions in his book From Hindi to Urdu: A social and political history, that Urdu borrows an enormous body of Persian vocabulary and also draws from the Arabic language. Some of the Urdu letters represent sounds specific to each language. None of the Indo-Aryan languages currently possess such unique hybridity, which may be jeopardised by the loss of its script.

Each script has its own specific character. Premchand produces two different versions of The Chess Players in two different scripts. Shatranj ki baazi was written in Urdu with the Perso-Arabic script and Shatranj ke khiladi in Hindi with Nagari script. 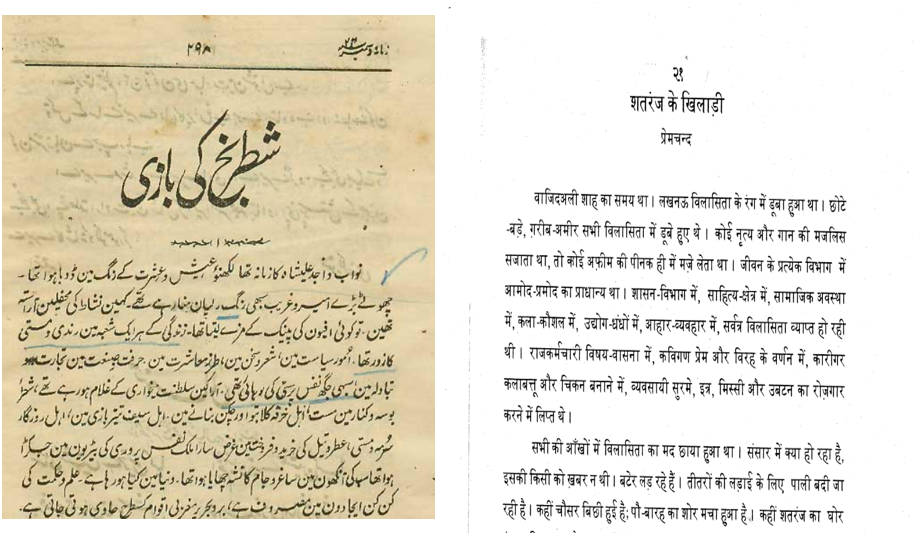 Frances W. Pritchett argued that both versions – Urdu with highly purified Persian loanwords and Hindi with Sanskrit cognates – had different leanings, catering to different audiences. It was only when written in Urdu that the characters of the story became real, whereas, in Devanagari Hindi, a sense of distance prevailed. Pritchett also notes that two sentences of the Urdu version are left out in the Hindi version. Although, both Hindi and Urdu are variants of Khari Boli, the script choice indexed different sets of identity. What would have been the outcome of the story if it had been attempted in the Roman alphabet?

The arguments based on pragmatics and the functionality of Latinisation of languages in terms of script are based on economic and ideological stances. One tends to ignore the hidden scientific representations and meanings in many of the ancient scripts, in which today’s researchers are still taking keen interest. To cite one example, the Khuda Baksh library in Patna has a collection of over 9,000 texts in Urdu, including rare manuscripts and old Urdu periodicals.

Richard Salomon’s chapter in the book The Disappearance of Writing Systems: perspectives on literacy and communication (2008) showed that script loss is mainly due to two factors: civilisation loss or decline, or change in dynasty.

Let us not enforce “civilisation loss” on Urdu and, as for dynasties, they have changed multiple times in India, but Urdu has succeeded in carving out its own niche in this powerful hybrid society. To protect and value our democracy, it is equally important to value and preserve the scripts, as they are a part of our ecological system.

Shahzaman Haque is Lecturer in Urdu and Assistant Director of the Department of South Asia and Himalayas at the INALCO in Paris.