A virtual reality film follows the boys as they overcome their marginalised backgrounds, various other hurdles and inch closer to their dream. “Yeh ballet kya cheez hai? What is this thing called ballet,” Amir asks at the beginning of the film. Manish, who had saved up and gifted himself modern dance classes around the same time, also had no clue. A mere two-and-a-half years later, both of them went from very humble backgrounds to the Oregon Ballet Theatre school in the US on a full scholarship. It was my privilege to document the tail end of their amazing journey.

My route to them was a circuitous one. My son Jahan, a student at Brown University, home for the summer, in the car on the way home from the airport, was excited about his new interest – wanting to make a virtual reality (VR) film. I had just read an article about Anand Gandhi’s VR lab. I put Jahan in touch with Anand who was very welcoming. Jahan started working on his film at the lab and they approached me to make a VR film for them.

Always of the belief that you can teach an old dog new tricks, I was eager to learn something new. Of all the subjects they presented to me, the one I was instantly drawn to was about two boys from very low income families who had been discovered by an Israeli American ballet teacher – Yehuda Maor – and were so good they had been offered a scholarship to the Joffrey Ballet. But they couldn’t go because the American consulate had turned them down for a visa.

I chose this for for personal reasons. I had learnt ballet myself as a child in South Bombay.

The first time I met them was in a coffee shop in Bandra. Manish, 21, with his high cheekbones, like a young Baryshnikov; Amir, only 15, but with the bearing of a seasoned ballet dancer. Manish was more talkative; Amir, shy and silent. We crossed the road, the boys helping Yehuda negotiate the crazy traffic. We entered the church compound, walked past the open church where a service was being held, to a room off to one side.

Then I saw them dance and they took my breath away. I found myself getting teary-eyed. It’s beautiful and rare to see such natural talent. I couldn’t believe that they had been learning ballet for only two-and-a-half years. In all my years of ballet class, with all our privileges, our ballet shoes without holes in them, not having to travel hours by train to class, in spite of our advantages, there’s not one dancer I can recall from my childhood who came anywhere near Amir and Manish.

We started filming them. Manish’s father is a taxi driver; Amir is the youngest of eight siblings and lives with ten members of his happy family in two small rooms in Sanpada, Navi Mumbai.

The parts I enjoyed filming most was them dancing in class. We placed the VR rig in the middle of the dance floor and had them dance around it. Even simple  warm ups – when they did them, you couldn’t take your eyes off them. They were effortless in their perfection of line, form and grace. 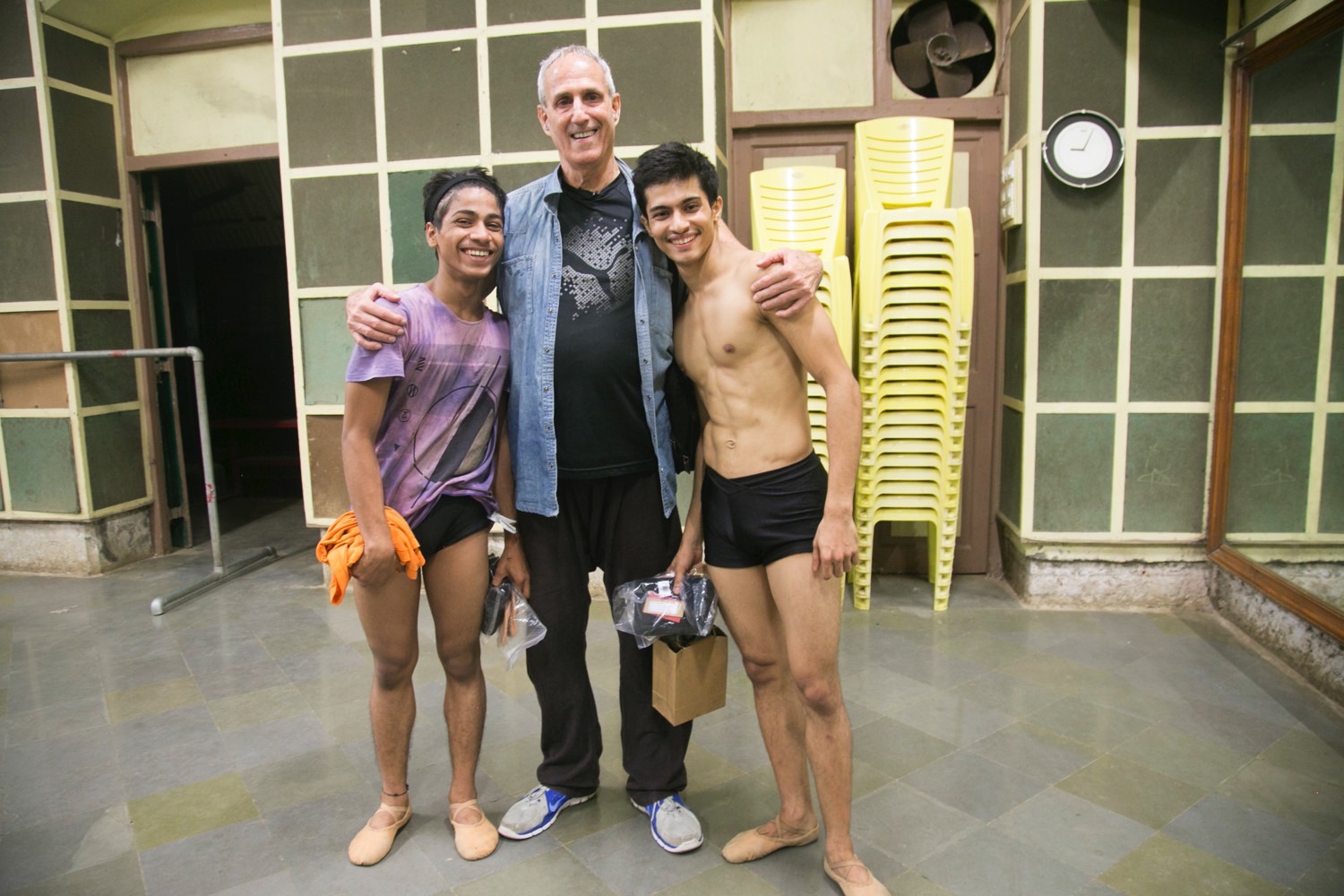 Amir and Manish with their teacher, Yehuda. Credit: Sooni Taraporevala 2016

This time when they applied for a visa, we were there with our VR rig. Amir went in and came out with a neutral decision – he was missing a paper. They hadn’t rejected him but he was asked to come back when he had the fee receipt. Manish went in at 11. We waited and waited. He was one of the last to come out but when he did, he was whooping and dancing. Poor Amir was still on tenterhooks.

Amir, who the previous day had defiantly not cut his long hair, returned the next day with his hair chopped short. I was there minus cameras. He told the visa official that she looked like Misty Copeland. He also came out jumping and did a backflip on the pavement.

Now they had their visas but as Yehuda said, there was a new worry. Finding $10,000 for their tickets and the boys’ personal expenses and clothes for the year.

I was at Amir’s house the night they departed – we were to travel together to the airport. The two small rooms were crowded with the ten members of his family he lives with as well as friends and neighbours, all come to wish him. I took many stills of Amir amongst them – their wild child who nobody imagined would make good – and that too in such a spectacular fashion!

When we said farewell at the airport,

I felt like I was saying goodbye to my own kids. Anxious for them, yet excited too. Like with my kids, I bugged them to keep in touch and was delighted to receive photos on Whatsapp charting their progress through airports and ending with snow. 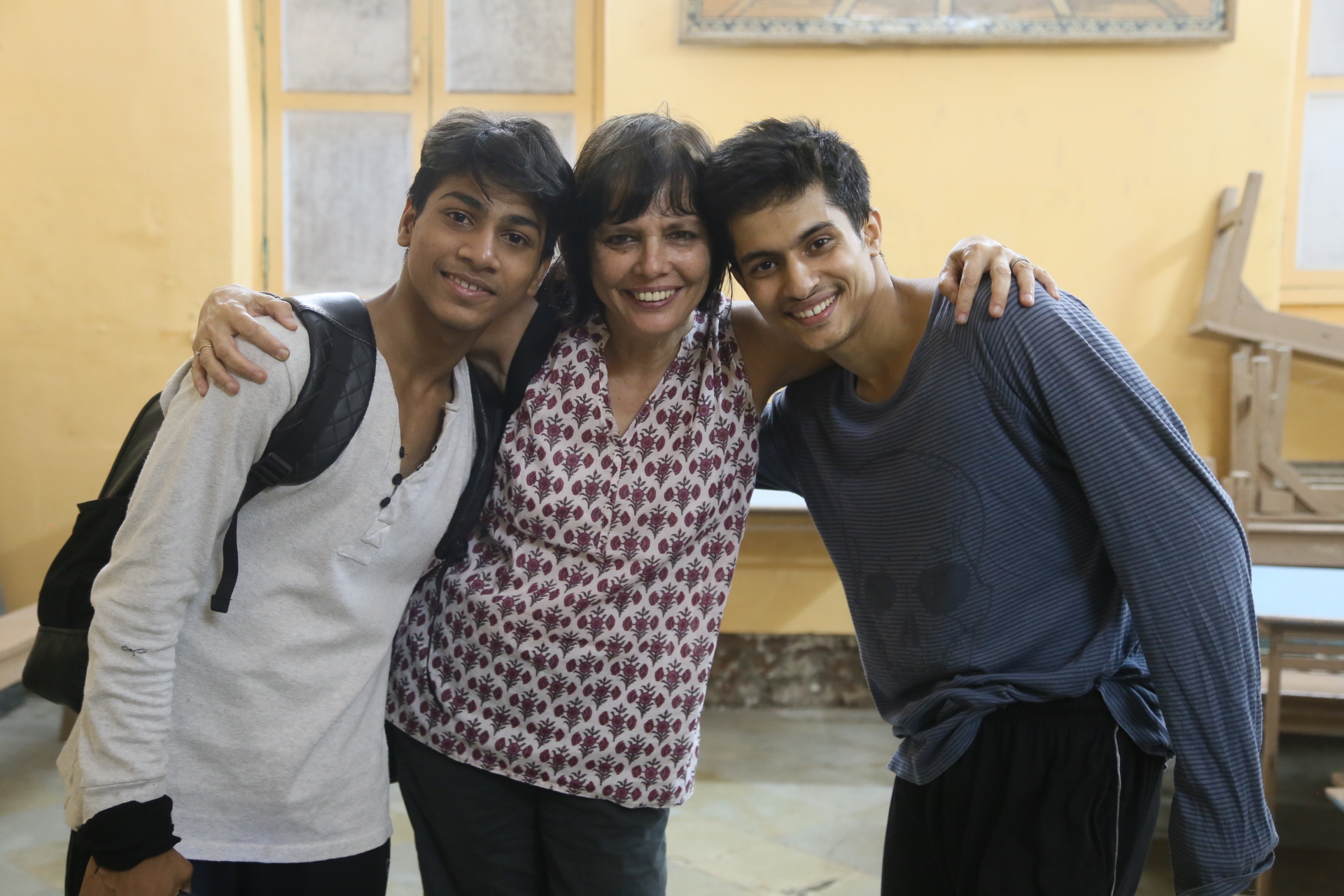 Yeh Ballet is set to release at the Sheffield Doc Fest in a few days and in India on Tuesday, June 6.

Much has changed in the intervening months. While Manish is still thriving at Oregon Ballet Theatre, Yehuda called Amir back to India. His living situation as well as his class schedule was problematic. He only had classes in the evenings, leaving him with a lot of free time on his hands. Yehuda felt it would be better for him to be training intensively with him whilst they applied to other schools where Amir’s talent would be better channelled.

They hit the jackpot. The American Ballet Theatre Jacqueline Onassis School – the top ranked ballet school in North America and number four school in the world – accepted Amir based on Yehuda’s homemade video made in the Andheri studio.

There’s even more of a happy ending. Philanthropist Yusuf Hamied, best known for defying large western pharmaceutical companies in order to provide generic AIDS drugs to the world, made a quick decision about Amir. One hour after he was sent an email about Amir, he responded. He would fund Amir’s entire expenses in NYC for the year. It is not a small sum.

Six months later, that’s where he’s headed. I fully expect to see him on stage at the MET in the future – dancing with Daniil Simkin, his hero.

Yeh Ballet is a virtual reality documentary experience from ElseVR, the non-fiction VR platform by Memesys Lab. You can download the ElseVR app here for iOS and here for Android phones.

Published in collaboration with ElseVR.