"In peacetime, you miss the pain of animals in captivity." 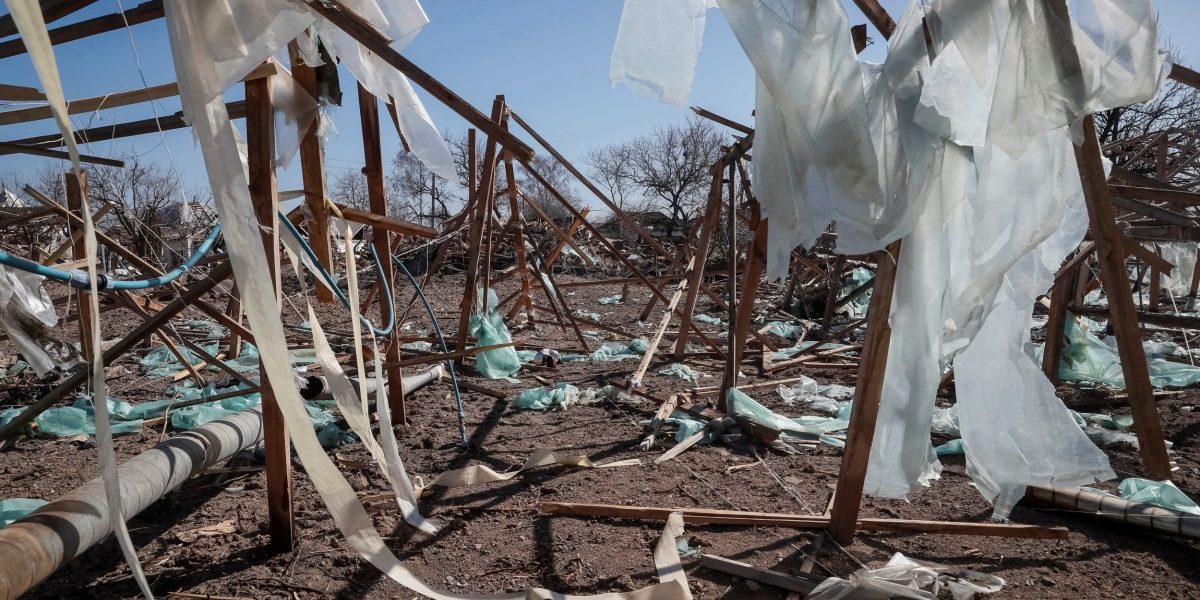 Destroyed greenhouses are seen in a village, as the Russian invasion continues, on the front line in the east Kyiv region, Ukraine March 21, 2022. Photo: Reuters/Gleb Garanich

The war in Ukraine enters my home.
I am hooked to three different channels,
listening how war makes life spiral
out of control, I sleep with
images
that turn into dreams, I see myself in a room
with broken windows, a woman
is clearing the splinters singing a song,
I am transported to Tarkovsky’s Mirror,
where Maria, her husband away in war,
is running in panic to correct an edit,
I dream within a dream, move from
one war to another, drag my luggage
to the border, from snow country to
snow country, the names of countries
differ, people look like people, war
divides victims, create phony
barriers between Moscow and Kiev.
Killing is an act of dying: a tank hides
a man like a coward, so he can be bold,
people are picking up guns to defend
their country, the one way to escape
the fear of death is to look it in the eye.
My father fled his country in ‘47,
I see hundreds in queues to lose
their country. Life, after all, is more
precious than country, this luggage you
carry is all of you. Mothers are giving
birth, war is a maternity ward of refugees,
we are all born in war or in its memory.
I read a poem that I miss from the first
line, I read phrases – bad teeth, peasant
mind, peasant body, and I take offence.
I take its irony for mockery. I am at war
with the poem. I lose what it says in
my nightmare. I wake up laughing. I am
wrong. It isn’t a joke. I break the poem
into words, splinter its meaning,
get hurt by its edges. Reading is walking
on the page, it slows you down. Speed
hampers the birth of meaning, reading
is not an act of fleeing, but withholding.
A man in Ukraine stops a tank with
bare hands. He slows down the war for
a moment, like the rebel in Tiananmen
Square in ’89.

Animals in a Kiev zoo

Not just human beings suffer war. Other creatures
also bear its wounds. In a Kiev zoo,

animals rattle like the bars of cages. Horace,
the elephant, can’t bear the fetters

that bind its legs. Its bewildered heart wants to feel
the grass, see the sky, to feel safe.

You soothe the outer crust of its pain,
and doctor what you deny. Maya, the lemur, almost

harms its child, walled by fears it cannot overcome.

It finds death a safer option than life.
Closer to nature, animals can sense if the world

around them is in danger. They need to be free

to run for cover, cross the border, take refuge
in another alien country.

The flock of birds scattered by a bomb
flees the “last sky”[†], the last forest

trembles in the bodies of animals trapped in cages.

In peacetime, you miss the pain of animals in captivity.

Note: The news that animals are facing the brunt of the war in a Kiev zoo made me ask the old question about zoos. War has disturbed the lives of people in Ukraine, and it is bound to affect other living creatures in the country as well. But imagine the disadvantage of the poor animals, forcibly kept away from their natural habitat for the sake of human entertainment. If their senses are disturbed by the sounds of war, and they are showing pathological symptoms, it can’t be simply blamed on the war itself, but their enforced condition.

[†] “Where should the birds fly after the last sky?” Mahmud Darwish