TV's Take on 'American Gods' is an Unmissable Pantheon of Weird

Adapted from Neil Gaiman’s Nebula Award-winning novel of the same name, the new series, now available for streaming in India, is in equal parts intriguing and overcooked. 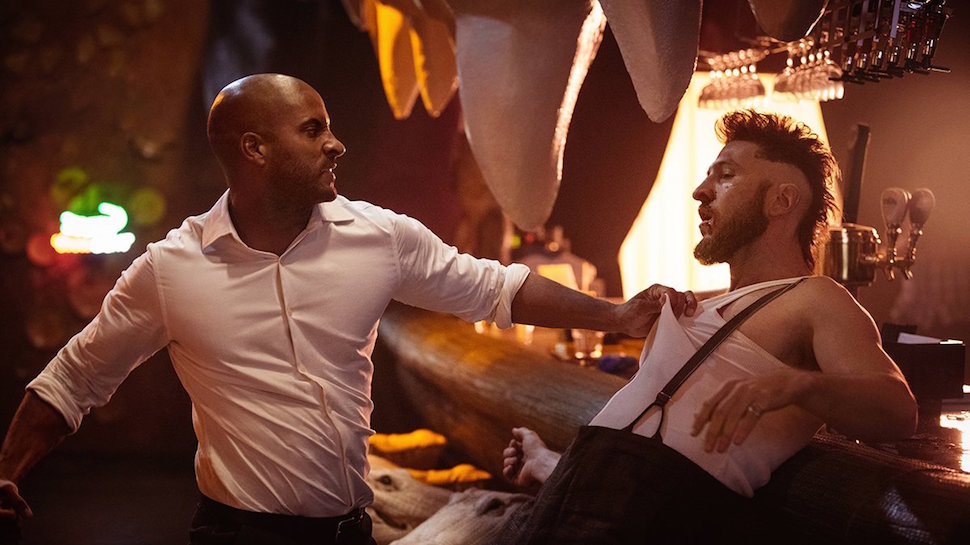 A still from one of the first episodes of the series. Credit: Youtube

Prologue: First one arrives, then a few more trickle down, and then they pour down like a snowstorm – each snowflake eons old, an intricate fractal of faith, a unique entity now melting away into a thousand others. Some Gods are hewn out of rock, some forged by centuries of tradition, others as adaptable as water and fickle as the wind. All of them suddenly finding themselves at sea amidst a people not all their own, a culture dangerously nascent, capable of casually, definitively, discarding millennia of myth. The Gods arrive in America.

In the book, the beginning of American Gods was a sucker punch – a loved one’s death in a shroud of graphic betrayal. In the TV version, this doesn’t happen until after a while and when it does, the effect is somewhat muted. On the other hand, the opening sequence is a marvellously bloody spectacle, quite over the top; at one point, a severed arm, still holding a sword, arcs across the screen and skewers the throat of a warrior in mid-battle cry.

Gaiman’s American Gods, winner of the Hugo and Nebula awards, among many others, cemented the author’s status as a novelist. It was an entirely original take on an idea as old as myth – that gods walk among us. Gaiman presented that idea through the kaleidoscopic, often psychedelic, lens of the US. American Gods is a fascinating study of the cultural fabric of this young country, of its energy and industry and invention, and its desperate tendency towards assimilation. It is a wry observation on the US’s obsession with technology and its vulnerability to sensationalism.

That’s a lot to live up to for a TV series, which is probably why there were a lot of false starts over the years. The gods finally favoured a version created by Bryan Fuller (who worked on Hannibal, Pushing Daisies) and Michael Green (Green Lantern, Logan). Gaiman still shares writing credits with Fuller, Green and Robert Richardson (Inglorious Basterds, Django Unchained, Shutter Island). Two episodes have aired so far in India on Amazon Prime Video (eight episodes, the entire first season, on Starz elsewhere), and it is a strange beast.

It may or may not get better, but so far, there’s a stutter in the script, which seems to fill silences with words that aren’t Gaiman’s. Particularly when the narrative goes a bit over the top – the swearing or fighting, for instance. In the book, Gaiman doesn’t really pull his punches with the death or hold back on the swearing, but on video, it feels a bit disproportionate. The first sequence, for instance. Or, later on, a shower of blood, bone and tissue splashing on protagonist Shadow Moon’s head. There’s also this ‘atmosphere’ which is a bit too thick and not like the book – not in a good way.

Gaiman has an elusive gift which only one other writer, the master of horror himself, Stephen King, has mastered – to be able to splice in some other-dimensional terror or wonder without a hint of portentousness, with a disarming matter-of-factness that only serves to amplify the impact of said terror or wonder.

American Gods tends to give away the plot a bit, or at least the hidden (in plain sight) fact that things are not what they seem. The rather heavy-handed approach to music doesn’t help matters much. This is probably why that sucker punch of a beginning that worked so well in the book wasn’t nearly as effective on TV. This doesn’t seem like a one-off. Whether it will affect the experience of the series is to be seen.

In any case, the performances are consistent and necessarily over the top; the cast obviously having a ball. Ian McShane in particular.

In a bit of casting that’s pure genius, McShane plays the All-Father, who fallen on sub-optimal times, running now on an old reserve of faith. He is spectacular as the wry, cheerfully unscrupulous god of war. Shadow is played with convincing seriousness and cluelessness by Ricky Whittle (Hollyoaks, Austenland). The sharp arch of his brows and the cut of his mouth gives him a Joaquin Phoenix intensity. Peter Stormare (Constantine, Jurassic Park II, Armageddon) plays Czernobog, an old Slavic god with creepy deadpan relish. One can imagine a bit of the Satan he played in Constantine. The cast so far also includes Gillian Anderson as the goddess of media and Orlando Jones as Anansi.

There are many more interestingly-written characters down the line to look forward to. For instance, a powerful Indian goddess and lord Ganesha make cameo appearances in the book. The latter even provides a vital clue to the protagonist, and helps solve a crime.