The Time Machine: The Grand Theft of the Mona Lisa

This week, the Time Machine recounts how the marquis of the gates of hell engineered the “crime of the century”. 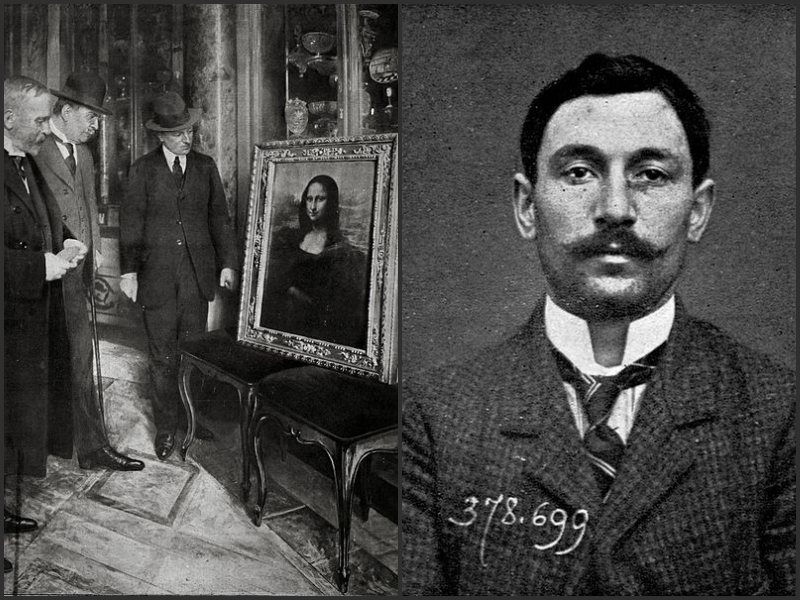 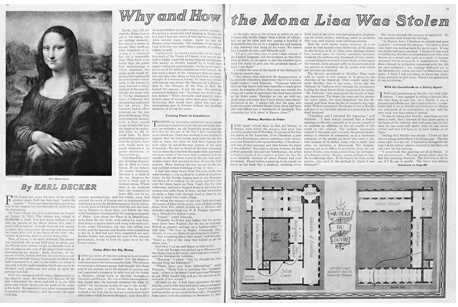 August 22, 1911, was a Tuesday. It was a summer morning in Paris. The Louvre was open for business. And a disgruntled artist was making his way to the museum to finish copying the ‘Mona Lisa’. Louis Béroud arrived at the exhibit to find four empty hooks and a blank space on the wall. He was not amused.

Turning to the guard, Maximilien Alphonse Paupardin, who was a retired army man, Béroud enquired about the whereabouts of ‘Mona Lisa’. The unconcerned guard supposed she was being photographed, as fashionable ladies were wont to do in the day.

There was a project underway to photograph the entire collection of the Louvre, and no special permission was required to remove the paintings off the walls.

Béroud was already unhappy with the way things were running in the Louvre. Without a paper trail to follow, he left cursing about the wasted morning.

At around 11, he returned again, hoping that they were done with the photographs. But the lady had not returned.

“Brigadier Paupardin, how long does a woman need to have her picture taken? The day is wasted. Do me a favour, find out when she will return,” he had apparently asked the guard.

Paupardin, condemned to spend the rest of his days sitting on a chair guarding the exhibit, a victim of boredom and a serial-dozer, was only too happy to be relieved of his post for a little while. Taking a little detour, he eventually arrived at the studio to ask the contract photographers when they thought they would be done with the ‘Mona Lisa’.

“She’s not here. No one has touched her,” was the reply he was given.

Panic was all Paupardin could do. The ‘Mona Lisa’, the prized possession of the Louvre, had disappeared on his watch. For years, the old guard had seen men behave a tad bit loony before the ‘Mona Lisa’. They came bearing flowers, notes and poems. Some would return day after day. Da Vinci’s lady was far from non-controversial. Only the previous year, the ‘Mona Lisa’ was the subject of an elaborate hoax – the Le Cris de Paris had claimed that she was missing and had been replaced with a copy, and they maintained this position for very long.

On Sunday, Paupardin, in between his afternoon naps on his designated chair, had seen a group of Italian men and a German youth dawdling around the ‘Mona Lisa’. Monday was thrilling, because it was his holiday – Mondays were when the museum was closed for cleaning and maintenance. Tuesday morning, he had arrived to an empty wall but had failed to comprehend that something was amiss till Béroud pointed it out. Now it was time to face the music.

The hysterical guard went to the acting director of the Louvre, Georges Bénédite. A search ensued but yielded nothing. Eventually, Bénédite informed the police who arrived that afternoon to investigate. The museum was shut down and cordoned off. But by then, the thief was long gone.

On the other side of the Atlantic, in May 1911, Marqués Eduardo de Valfierno was carrying a Louis Vuitton case in which he claimed was the ‘Mona Lisa’. He didn’t attempt to hide this information from the customs officials when he disembarked at New York. Nothing was suspicious or untoward about his claim. People were returning with copies of masterworks all the time. If the customs officer knew any better, he might have paused and demanded an explanation, because the ‘Mona Lisa’ that de Valfierno was carrying was on a wood panel. Da Vinci’s original was on wood and not canvas.

De Valfierno – the marquis of the gates of hell – was a curious man. On the evening of his arrival in New York, he would have a private dinner engagement with a wealthy man to whom he would offer the prized painting. It was made worth the gentleman’s while – de Valfierno would inform him that the offer was being made to only five other distinguished collectors of art and the highest bidder would claim the ‘Mona Lisa’.

Unbeknownst to the marques’ victims, there were five other perfect replicas placed carefully in a bank vault in downtown Manhattan.

Back in Paris, the museum authorities and the police were at their wit’s end. The ugly debacle was splayed across tabloids. Embarrassment hung heavy for the Louvre as questions, along with eyebrows, were raised – why wasn’t the prized possession of the Louvre bolted to the wall? Why could nearly anyone come and pluck paintings off the wall? Why did it take more than 24 hours for someone to notice that the painting was stolen?

Then on August 29, a blessing in the form of Joseph Géry Pieret walked into the Paris Journal’s office offering information. The former secretary of the poet Guillaume Apollinaire, Pieret’s testimony implicated not only his former employer, but also Pablo Picasso. The Paris Journal had protected Pieret’s anonymity, but from his account, the police found Apollinaire. Picasso and Apollinaire were close associates and easy suspects. They were part of the ‘Wild Men of Paris’ – leaders of modernism and the avant garde; men who believed that the old must fall to make way for the new. Apollinaire had even signed a petition once to burn down the Louvre.

Three days after the theft, he had written in the L’Intransigeant:

“The ‘Mona Lisa’ was so beautiful that her perfection has come to be taken for granted. There are not many works of which this can be said. But what shall we say of “The guard that watches the gates of the Louvre”?”

But perhaps more damningly, their actions raised suspicions far more than their words. Neither Picasso nor Apollinaire were innocent of art theft. Both had nicked Iberian statues from the Louvre, statues they almost threw into the Seine in the middle of the night in an attempt to destroy evidence of their crimes. Ultimately, they could not, and Picasso ended up returning the pieces to the Paris Journal.

Both Picasso and Apollinaire were put on trial in connection with the theft of the ‘Mona Lisa’, but the trial became a farce – Picasso wept and Apollinaire pleaded his innocence. The courtroom became a theatre of the absurd as nonsensical claims were made. The judge had had just about enough when Picasso made a sudden claim that he had never even met Apollinaire. The case was dismissed and the startled pair found that they were suddenly free to go.

The real thief and the painting emerged two years later, in December 1913, in Florence. He was no less excruciating and perplexing than the initial suspects, although far less illustrious. Vincenzo Peruggia was the man who had removed the painting from the Louvre on August 21, 1911. He was the glazier who had helped install the glass casing for the ‘Mona Lisa’ – the inside man who had smuggled the painting out, hidden in the ubiquitous white smocks that the museum maintenance staff wore. 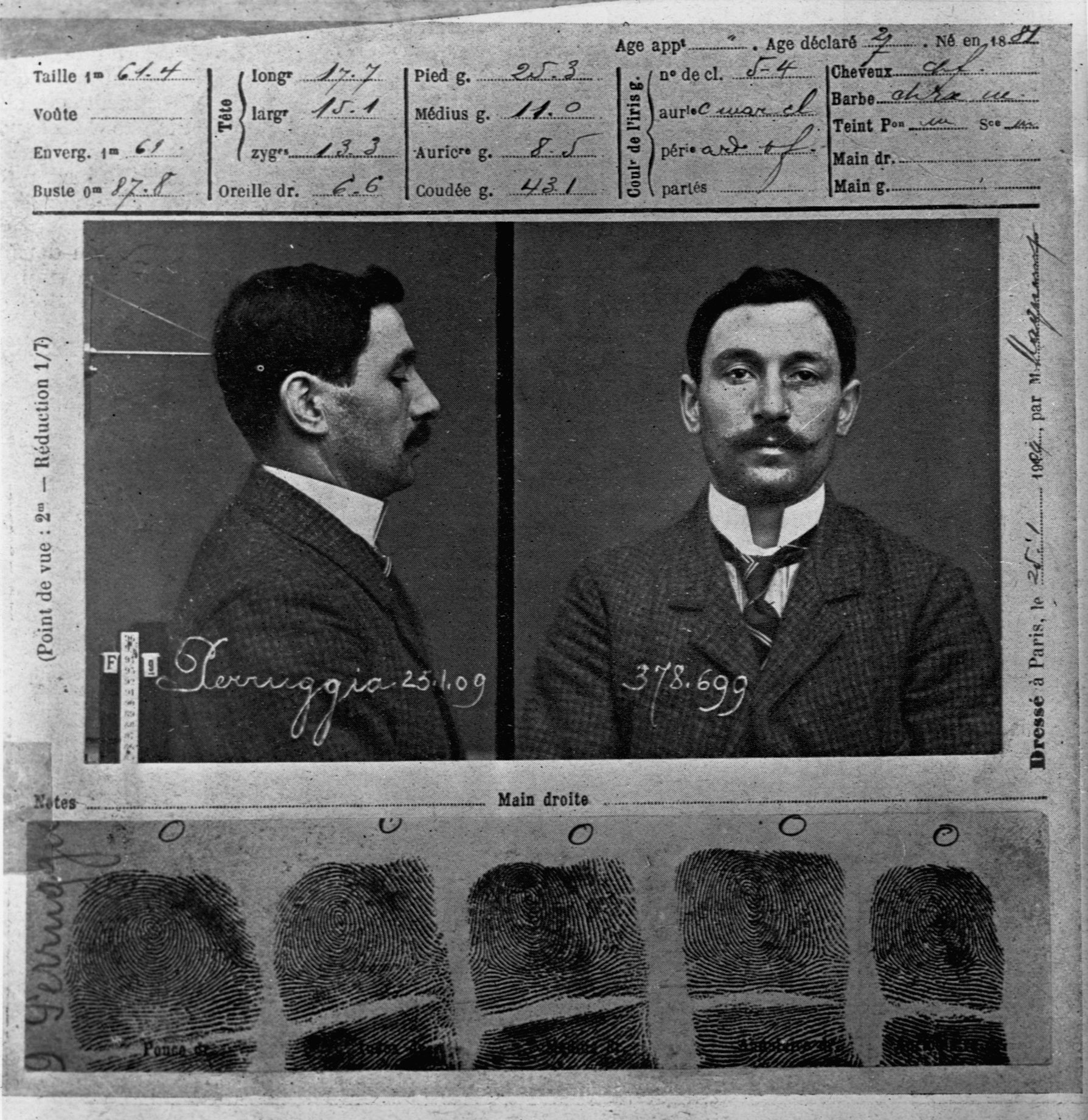 Mug shot of Vincenzo Perugia, the Italian man who stole the Mona Lisa out of the Louvre Museum in Paris. Credit: Wikimedia Commons

Peruggia was proud and stubborn. He claimed the theft was an act of patriotism, and throughout his trial, he did not once waver from this story. His was righting wrongs. The ‘Mona Lisa’ belonged to Italy. And he had brought her back. He was undoing the injustice and indignity that Napoleon Bonaparte had inflicted on his country by stealing Italy’s treasures. To Italy, he was a hero. To the world, he was a disappointment. The world was expecting a mastermind. What they got was possibly a madman. In one of the numerous interviews that Peruggia gave, he said:

“I was ashamed that for more than a century no Italian had thought of avenging the spoliation committed by Frenchmen under Napoleon when they carried off from Italian museums and galleries pictures, statues and treasures of all kinds by wagonloads, ancient manuscripts by thousands, and gold by sackfulls. Many times, while working in the Louvre, I stopped before da Vinci’s picture and was humiliated to see it there on foreign soil. I thought it would be a great thing for Italy were I to present the wonderful masterpiece to her, so I planned the theft.” 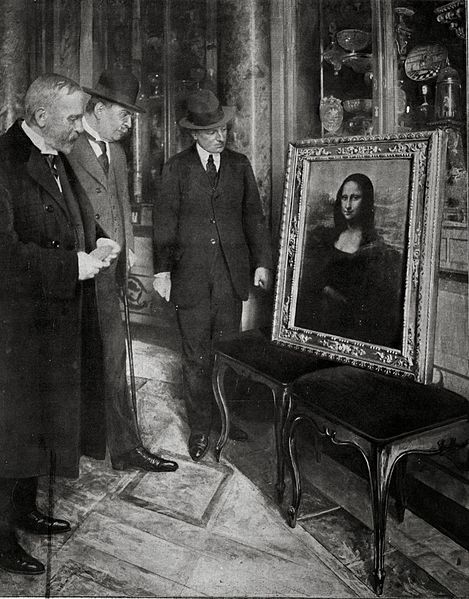 The Mona Lisa on display in the Uffizi Gallery, in Florence, Italy. Credit: Wikimedia Commons

In his jail cell, Peruggia received presents and letters from adoring Italians commending the great service he had done to the nation. One man had even offered to pay five thousand lire for his bail.

But soon, the fanfare died down; the prosecution began; the case against Peruggia was conclusive, but several questions still remained.

Eighteen years later, on June 25, 1932, the Sunday Evening Post’s Karl Decker had a fascinating story to tell – a story straight from de Valfierno.

Early in 1911, six replicas of the ‘Mona Lisa’ were stored in a vault. Each replica was to be sold for millions to six wealthy Americans. As James H. Duveen wrote:

“All the great European fakers worked with an eye on the rich Americans. … The more fantastically untrue a story connected with a picture or work of art, the more likely it was to find an eager buyer among the flocks of rich Americans who vied with each other in buying the bed Queen Elizabeth (or Empress Josephine, or Cleopatra – or all three) had slept in.”

To convince his buyers of the authenticity of the copy that was being sold to them, the real ‘Mona Lisa’ had to disappear.

A scapegoat was needed – an aide who knew the workings of the museum and could be bought. Enter Peruggia, the perfect man for the job.

However, the truth of de Valfierno’s story still remains doubtful.