The Time Machine: Durga the Demoness and the Protector

This week, the Time Machine looks at the mythology surrounding Durga and traditions of goddess worship. 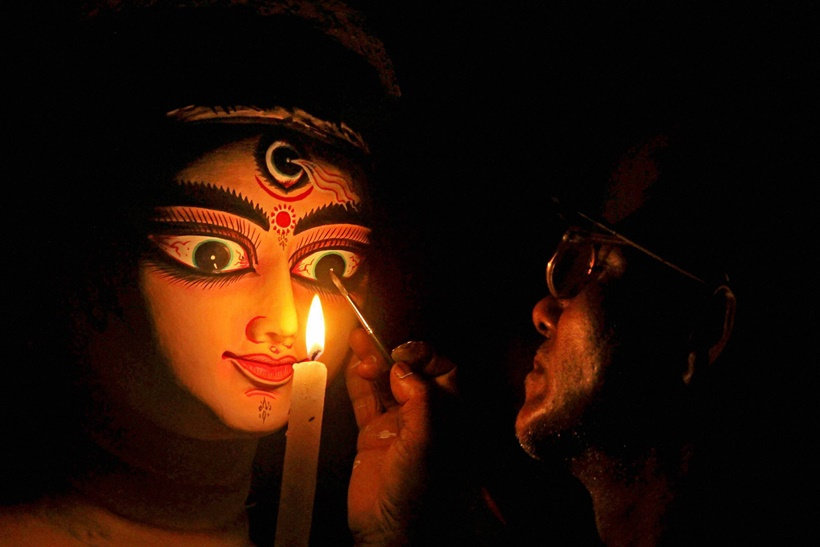 Generations of children in Kolkata have grown up watching Durga vanquish Mahishasura on Doordarshan, early in the morning, every Mahalaya – complete with the sonorous chanting and ridiculously bad visual effects. It’s all part of getting into the ‘pujo feel’.

Consequently, the mythology is all too familiar and almost set in stone. Mahishasura – a shape shifting demon – engages in some tapasya, asking the divine Brahma for powers of invincibility, specifically that he will never suffer defeat at the hands of a man. He starts out looking fairly austere, with rosary and a dreadlocked bun atop his head.

Meanwhile in heaven, a bunch of rather timorous looking Vedic devas, Indra, et al, quake in their sandals, so to speak. The demon’s trance will not be broken. Even when they send an apsara down to earth to tempt him out of his tapasya, the apsara’s powers of seduction fail entirely. Mahishashura bats not an eyelid, such is his concentration.

Eventually, Brahma grants his wishes (because for some reason, universe-creating omnipotent deities somehow lack the power to say no), unleashing doom on his own heavenly kind.

Gloating over his newly acquired invincibility, Mahishasura passes by a sage’s hut. He steals and drinks amrita (an elixir for immortality) from the sage, disguised as a woman.

Having been fooled thus, the fuming sage curses him. He guffaws heartily and says he’s invincible, so joke’s on the sage. Unflinchingly, the sage curses him again, “Because you tricked me with the disguise of a woman, your defeat will come at the hands of a woman.”

The demon doubles over with laughter – a woman! That’s rich. Unperturbed, he gets a makeover, shorn of austerity, gilded crown and silken robes; he then gathers his asuras and goes to conquer heaven.

The devas are overwhelmed easily. They can be seen fleeing the scene, holding on to their wigs. The cowering refugee devas gather at the sage’s hut, which was clearly the rendezvous point, for the trinity, Shiva, Vishnu and Brahma arrive. What is to be done about Mahishasura? More thumb twiddling ensues. They all mull and the sage tells them the answer is simple – you must have a woman defeat the invincible demon, because the devil lies in the detail. He is invincible only for men.

This notion pleases them. Heavenly light in the form of bad CGI can be seen pouring out of their beings – and Durga, their saviour is created. To her, each of her creators lends an aspect in the form of a weapon. She now has an arsenal to defeat Mahishasura with, and of course, she does.

Roughly this version of events is what first appears in the Devimahatmya (which is part of the Markandeya Purana), estimated to have been written between 400-600 CE. There exists a narrative that the defeat of Mahishasura at the hands of Durga, is a story oppression – it is the story of the defeat of a tribal god to a Vedic deity, fair of skin and tame. However, Durga doesn’t find mention in the Vedas, which were composed and recorded much earlier (c. 1500-600BCE). In fact, the eastern regions lay largely outside the ambit of Vedic influence as late as the Gupta period (c. 320-550 CE).

B.C. Majumdar in 1906 wrote, “I need hardly point out that neither the Vedas nor the old Vedic literature knew the name of this mighty goddess,” and continues to demonstrate that one stray mention was an interpolation. 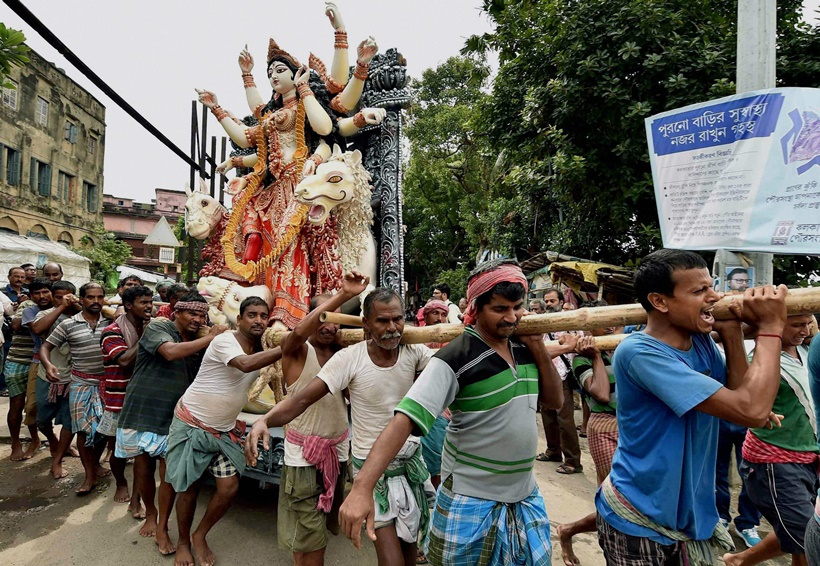 Durga’s behaviour and characteristics are decidedly un-Vedic. She, like several other gods and goddesses, got unwittingly co-opted into the ever expanding Brahmanical pantheon, as Kunal Chakraborty said in 2001.  Tithi Bhattacharya writes:

“Hindu texts that mention Durga before this process [of integration] began, such as the Mahabharata and the Harivamsa, have a very different picture of Durga than the one that we are familiar with. She is described as a fearless virgin, hunting and living in mountains (Vindhya or the Himalayas), craggy terrains, and caves. Her companions are ghosts and wild beasts, and she is dressed in peacock feathers. Her diet, consisting mostly of meat and alcohol, is not very Brahminic either.”

Chakraborty suggests that her appearance in the Devimahatmya, “with the help of myths and epithets… subtly connected her with a Sanskritic tradition”. A clearly non-Vedic deity is given space in Brahmanical texts by her manifestation as a form of Shakti, the Vedic notion of divine energy (which in the texts of the Vedic period, is usually represented in the form of a female consort).

Traditions of goddess worship were diverse before their appropriation into the Brahmanical fold. The nature of religion was changing, and Brahmanical orthodoxy was being challenged by Bhakti cults. In the eastern parts of the sub-continent, there existed a proliferation of Shakti cults, which interacted and integrated local practices. June McDaniel records the various folk beliefs and traditions from various parts of present-day West Bengal, in an attempt to tie them to the extensive mythology surrounding Durga, as she is seen today. McDaniel writes:

“Durga grew to this lofty status over time. She absorbed many traits from the gods and goddesses around her. As the gods all gave her weapons to kill the demon in her puranic origin myth, on a subtler level village deities gave her many qualities that were later incorporated into her stories.”

Several forms of the goddess were represented as “black” with multiple limbs, like Jayadurga or Shulini Durga, both of whom emphasise the war-like aspects of the deity. Sometimes, she is an agricultural deity and a fertility goddess, in the form of Shakhambhari, the provider. In other instances, she is the forest goddess – Vana Durga – who is often worshipped outside in a makeshift shrine, usually under a sheora tree. Interestingly, sheora trees are infamous in local folklore – they are the trees that petnis (a certain category of female ghost) are thought to reside in. There might have been a connection between Vana Durga and the enduring petni myth with regard to their association with the sheora tree. N. M. Chaudhari’s work on the cult of Vana Durga shows that in some stories, she is referred to as Jatapaharini,  a demoness who kills babies. In other stories still, Vana Durga is said to be the mother of danavs (demons).

The clever thing about the process of assimilation was that these frightening aspects of local folk deities were absorbed (and sometimes obscured) and interpreted as a version of a primal deity. For the goddesses, this was usually Shakti. Consequently, we have deities combining both the gentler, tamer Vedic aspects and the fierce tribal aspects.  Once subsumed under the umbrella of Brahmanism, the once fiercely independent and rather terrifying female deities – worshipped and adored largely by women in villages – become subordinate to essentially male power. The Brahmanical Durga is created combining the power of the devas, all men. Her power and magnificence may be awesome, but like Eve was made out of Adam’s rib, Durga was cast as a creation of men.