“The Tamil Nadu Government Should Learn a Lesson”

Anti-liquor activist Kovan, who was slapped with sedition charges for criticising the government’s liquor policy, speaks to The Wire hours after the apex court vindicated his stand 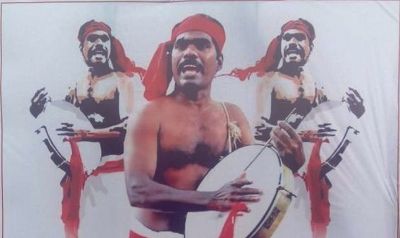 Chennai: From relative anonymity to becoming the subject of a campaign to free him, Kovan, a small-town anti-liquor campaigner based in Trichy, Tamil Nadu is now being seen as a symbol of the state’s abuse of power against an individual.

A member of a group called the Makkal Kalai Iyakka Kazhagam (People’s Art and Literary Association), Kovan was arrested on October 30 at 2 in the morning from his home in Trichy and slapped with sedition charges. His crime: He wrote and sang two songs against the liquor policy of the Tamil Nadu government and criticised Chief Minister J Jayalalithaa. These songs went viral on social media with over half a million hits on YouTube alone. After spending a day in police custody, Kovan then moved the Madras High Court which denied any further custody to the Tamil Nadu police on November 7. The Tamil Nadu government the moved the Supreme Court demanding custody, stating that Kovan was a “habitual offender”.

The Supreme Court on Monday dismissed the state’s petition, observing that Sections 499 and 500, both of which deal with criminal defamation, were not meant for governments to settle individual vendettas. Justice Dipak Misra, while dismissing the petition, also noted that such cases mostly come from Tamil Nadu.

Hours after the Supreme Court verdict, Kovan spoke with The Wire about his experience.

How does it feel now that the Supreme Court has vindicated your stand?

Instead of taking action against me or countering me in a democratic manner, they (the state government) has already kept me in custody for one day and slapped these cases on me. All this, for criticising a government that runs TASMAC (Tamil Nadu State Marketing Corporation which is the liquor retail monopoly). It is their mistake to have filed such a case of sedition. When my case was being heard in the Madras High Court, the judge asked them how this warrants sedition and denied police custody.

All ministers in this government keep saying “Amma” for every single scheme or practically anything. I cannot criticise any government without criticising its leader.

The judge asked the state government whether I was a habitual offender or a Naxal to invoke sedition charges against me. Will the truth known by the Madras High Court not be known by the Supreme Court? But still the government went ahead with its vendetta. I welcome the Supreme Court’s verdict. The court has condemned the move by asking the Tamil Nadu government why they should bring an individual’s case to the apex court. The Tamil Nadu government should learn a lesson from this. The government should safeguard the democratic rights of the individual. By taking away our democratic rights in this manner, the government is being dismissive and disrespectful of the people who voted for them.

Did you expect such action from the government when you wrote and sang these songs?

No I certainly did not expect this. We are just a small group that goes to the people to sing about social evils. We used social media to take our songs to the people because. Alcoholism is ruining people’s lives. The songs became popular because they touched the people’s conscience, they affected them. The songs were shared by people, by youngsters. Unfortunately this went against the government’s interests. It made the government angry.

There is a belief that this action was taken against you because you criticised Chief Minister Jayalalithaa to a large extent in your songs.

When anyone criticises the government, we can only criticise the head of that government. The government is not a nameless, faceless, formless identity. All ministers in this government keep saying “Amma” for every single scheme or practically anything. I cannot criticise any government without criticising its leader. It is sad that they have taken it personally.

You were in police custody for one day before the court intervened and granted you bail. What were you asked while in custody?

A lot of people questioned me. They did not introduce themselves or mention which departments they belonged to. Around 10 people questioned me even before I was remanded. After remand, one person told me he was from the Intelligence wing of the police. I told him I have to answer only to Cyber Crime officers, since they were the ones who filed the case, but still I answered his questions. He asked me if I was a Maoist, whether I was in touch with Naxals. I told him I was part of a small group that sings songs on social issues and takes them to the people. He asked me who all were part of the Vinavu website (which uploaded the songs). I said, ‘I do not know the technicians of the site.’ He asked me if I knew about the Otthakadai bomb case (In March this year, two people were arrested for planting explosives in Othakadai, Madurai). I said I do not know anything about it. I told him I only read about social issues which are relevant to us in papers. The interrogators asked all sorts of questions unrelated to the main case. They tried all sorts of things to get me to accept something that they wanted me to. They have tried to brand me. I said this to the judge in the Madras High Court too. One of the protests organised in Trichy for Kovan’s release. Credit: vinavu.com

Since your arrest, there has been widespread condemnation of what is perceived as the state government’s undemocratic actions. Do you believe it is so?

This government is attacking the foundations of democracy by curbing freedom of speech. It is not just me, they have filed cases against the media and anyone writing or speaking out against them. The chief minister must remember that she is part of government – she will obviously be criticised. If she were a nobody, no one will bother criticising her. If she cannot take criticism, let her retire to Kodanad. Political parties, the press and media, everyone should condemn this.

What are the main issues you tackle through your songs?

We have composed and sung songs against casteism, religious fascism especially Hindu fascism, condemned violence against women, voiced our opposition to wanton destruction of natural resources like sand and granite in the state. We have sung one song against Coca Cola ruining our water bodies. We have done another on corrupt politicians who have become rich suddenly. We have done a number of protests on various issues as well.

What is your background and what does the name Kovan mean?

I am an atheist. I am against religion and caste. My real name is Sivadas – I did not want a name associated with a religion, so in 1983 when I joined the Makkal Kalai Ilakkiya Kazhagam, my senior comrade changed my name to Kovan. Kovan means king. It is a Tamil name. We are a group with a communist-like ideology.

Now that your stand has been vindicated and you are out, what is your next move?

I am a part of the Makkal Kalai Ilakkiya Kazhagam. The group’s goal is to speak out and sing on behalf of the people. As soon as I came out, I sang a song about the floods in the state. Our journey will continue until there is complete equality in society.

What have you learnt from this whole episode?

I have understood more deeply that this government is against democracy. This government is not following even the basic rule of law. I have also learnt that when one sets out to serve the people, there will be all sorts of obstacles, but we should face these and go on.

There is criticism of you from some quarters for having met Dravida Munnetra Kazhagam (DMK) chief Karunanidhi and Opposition leader Vijaykanth soon after your release. Does this mean your issue may take a party political turn?

When the DMK was in power, we criticised them for giving freebies and for other anti-people schemes that were brought in by them. We have sung many songs against them. At that time liquor retail was in the hands of private bar owners. We have sung songs saying the government should not allow liquor sales. Similarly we have sung songs against this government too. As for meeting Karunanidhi or Vijaykanth, I think it is my duty to thank the people who have stood up for me without even knowing who I am. All parties other than the ruling All India Anna Dravida Kazhagam (AIADMK) and the BJP (Bhartiya Janata Party) spoke out for me. The first people I met were in fact Vaiko (leader of Marumalarchi Dravida Munnetra Kazhagam), Thirumavalavan (leader of Viduthalai Chiruthaigal Katchi) and state leaders of the CPI (Communist Party of India) and CPM (Communist Party of India (Marxist)). It is only after that that I met the DMK chief and treasurer, K Veeramani of the Dravidar Kazhagam and Vijayakanth (leader of Desiya Murpokku Dravida Kazhagam). It is basic decency to thank those who have supported me. I feel it is wrong to ascribe false intentions to my meeting all these leaders. I have also requested them to support me in the future.