The English Game: Football's Class Conflicts Under the Spotlight in Netflix's New Drama

A battle between aristocratic amateurs and working class professional led to the game we all know and love. 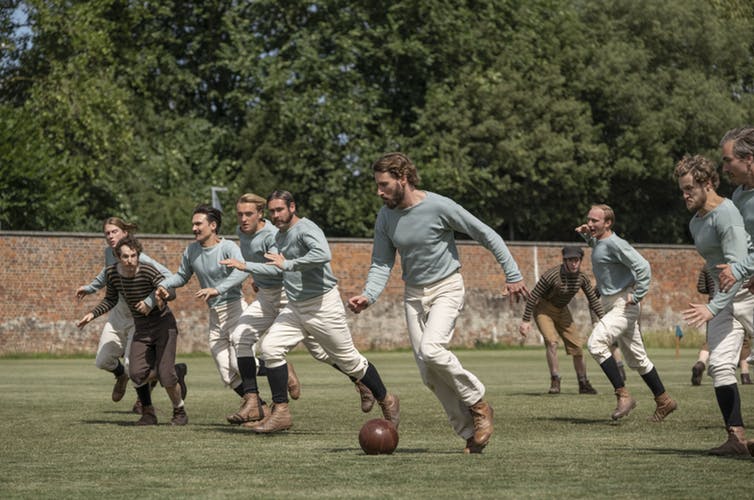 The English Game is a six-part drama following the birth of professional football in the UK. Oliver Upton/ Netflix

In the 20th century the sport would come to be called, albeit romantically, “The People’s Game”, as the world’s working class took football to heart. As football grew and diversified, so did its class dynamics, and not always in straightforward ways.

The English Game is written by Julian Fellowes who had a huge hit with Downton Abbey and has become known for focusing his attention on stories of the privileged elite and the working class with whom they share uneasy social space. Rather than employ antagonistic “hero-villain” plot devices, Fellowes prefers a degree of mutual empathy and political ambivalence between characters as they liaise across class divides.

While viewers might expect such nuances, along with historically faithful period costumes and evocative settings, it will be interesting to see if The English Game affords similarly complex and accurate depictions of wider social and economic reality. Especially since critics of Fellowes’s past works have felt he glossed over the stark realities of class relations.

The amateurs and professionals

The English Game unfolds amid the growing influence of commerce and capital on football – a context that disrupts and shapes material relations between rich and poor. In this case, between gentlemen “amateurs” and working-class “professionals”.

The upper classes set down the formal rules and structures of modern football in the mid 19th century, after it had flourished in various forms in the public school system. Football has older “folk” origins, but it took a particular class-infused unfolding of social, cultural and economic processes to produce the game that would go on to enchant much of the world. 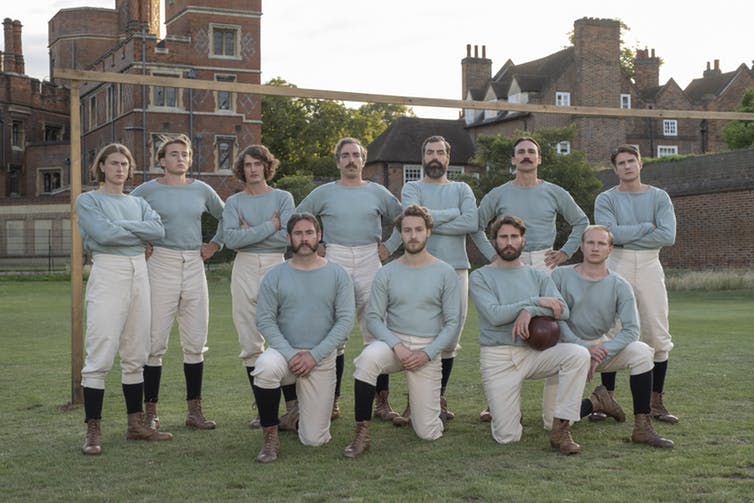 The industrial revolution had created new class relations. The urban lower and middle classes embraced football, in both culture and commerce. This included secret payments for workers to play for local teams in what was still legally an amateur sport. Talented players were enticed by these rewards to move to English towns and cities, many coming from Scotland, officially to work in local industry.

This brought pools of playing talent to smoky mill towns, and with it new advances in how football was played. Inverting certain class conventions, the workers’ technical, passing style contrasted with the more physical, often violent game of the amateur aristocrats. The resentful upper classes tried to stop this encroachment into “their game”, clamping down on the economic basis of the working class “professional” sport. The “new money” of the modern world was seen as a threat to their “old money” status.

as football completed its mutation from an idiosyncratic aristocratic pastime to the most significant popular cultural practice of working-class life, it came to embody, in its sporting, cultural and commercial norms, the changing class balance and political compromises of the age.

Such a compromise would lead the Football Association (FA) – with self-preservation trumping principle – to legalise the payment of wages to players in 1885. The superiority of the professional clubs, watched by large paying crowds, soon cast the Corinthians, Old Etonians and other standard-bearers of the amateur ethos into the annals of quirky football obscurity.

Football, class and the market

The working class, core to football’s growth yet passive in terms of power and control, has only occasionally flexed its collective muscles. Players organised into unions soon after the formation of the Football League in 1898, so brandishing the threat of withdrawing labour. Eventually, this collective clout brought an end to the maximum wage and retain-and-transfer systems, in which players’ wages were capped and clubs could retain player registrations against their will, even after contracts had expired. Workers, in this case, found common ground with free-market principles to mobilise against a relic of football tradition. 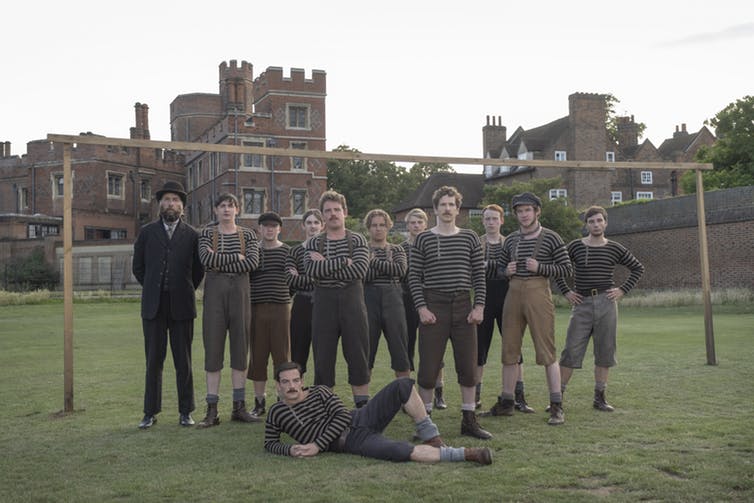 In opposing football’s sacrifice “at the altar of commercialism”, fans’ interests have occasionally chimed in dissonant harmony with the views of the game’s governing aristocrats. A sign perhaps of lingering spirits from the FA’s once firm commitment to limit market influence in the game.

Such incidental overlaps do not, of course, equate to solidarity with working-class interests; the game’s guardians have long since been at ease with its commercial imperative. Though grating with certain noble sensibilities, the market has proven open to preserving class privilege and all the symbolic and social capital it brings. For the FA, this has no doubt cushioned the blow of compromise.

The working class, on the other hand, have their place, as paid labour or as consumers providing football’s marketable cultural backdrop. While football’s toffs and suits have their differences, and each may sometimes find common ground with the ruffians on the pitch or in the stands, class hierarchy essentially remains intact.

For now, football’s working classes appear to accept that power within The English Game resides somewhere above. It is not for “the likes of us”.