‘A Way to Reclaim Our Identity’: How ‘The Chenab Times’ Is Using News to Preserve Dying Languages

To counter the impact of the Centre's Bill on official languages, the editor-in-chief of the news website, Anzer Ayoob, decided to produce news in Sarazi and Bhaderwahi – the two main local languages of Jammu’s Doda region.

A team member of 'The Chenab Times' reporting on developmental issues in the Chenab valley. Photo: By special arrangement.

New Delhi: Tucked in a corner of a house in the Chenab valley is the office of The Chenab Times, a multimedia news website that aims to produce news in two main local languages of Jammu’s Doda region – Bhaderwahi and Sarazi.

The team uploads videos on YouTube that wrap up daily news, first in Urdu and then in Bhaderwahi and Sarazi. The news portal also gives space to writers from across the country to write for their op-ed section.

In January 2017, 23-year-old Anzer Ayoob, the editor-in-chief of the news website, started this portal that would run news in Urdu and English. However, after the parliament passed the Jammu and Kashmir Official Languages Bill – that made Hindi, Kashmiri and Dogri the official languages of the Union Territory – in September 2020, locals in the valley felt side-lined and ignored.

Many expressed dismay over the exclusion of Gojri, Pahadi and Punjabi and how the Bill coerced speakers to align with Hindi in a region where it is barely spoken. This also led to apprehensions over the marginalisation of Urdu.

The civil society groups have expressed severe concerns over the Union government’s decision to digitise materials of Kashmiri language in Devnagri script instead of the Nastaliq script, pointing to serious apprehensions about the devaluation of the Persian script.

While the promotion of Devnagri does not only imply demonetisation of Nastaliq script, but empowering Devnagri over the Nastaliq script stirs questions about the endangerment of several languages like Gojri, Pahari, Poshtu, Balti, Sheena, Urdu, that are written in the Persian script. Languages of concern for the Chenab valley, Bhaderwahi and Sarazi also use the Persian script.

To counter the impact of the Union government’s Bill on official languages, Ayoob decided to produce news in Bhaderwahi and Sarazi.

Language as an identity

As per the 2011 census, the Chenab region houses a population of more than 900,000 people, and there are only 46,000 speakers of the Sarazi language and approximately 50,000 speakers for Bhaderwahi left in the region.

Both the Sarazi and Bhaderwahi languages are spoken in the Doda district. On one side of Chenab, where Doda city is located, people speak Sarazi, whereas on the other side, where Bhaderwah is located, the entire region speaks Bhaderwahi.

Ayoob’s efforts to run news in these languages aims to bind the speakers in a better relationship with their local languages. At a time when English education is being preferred worldwide, he said that the responsibility to save and promote a language lies on its speakers.

“Initially, our team worked on the promotion of tourist places in the Chenab region via photos and videography. Our region lacks proper road connectivity. Most of the tourist places are not connected by roads and remain unexplored. We focus on highlighting these places,” Ayoob said.

Now that the online production of news content in the two languages is in full swing, Ayoob also dreams of establishing a print version of The Chenab Times.

The team focuses on hyper-local reporting to highlight developmental issues such as water crisis, road connectivity, electricity, etc. They visit the affected village or area, meet the people, and record their ordeals on camera. But their job does not end at data collection and reportage. They also convey the problems to the concerned department and request them to look into the issues at the earliest. 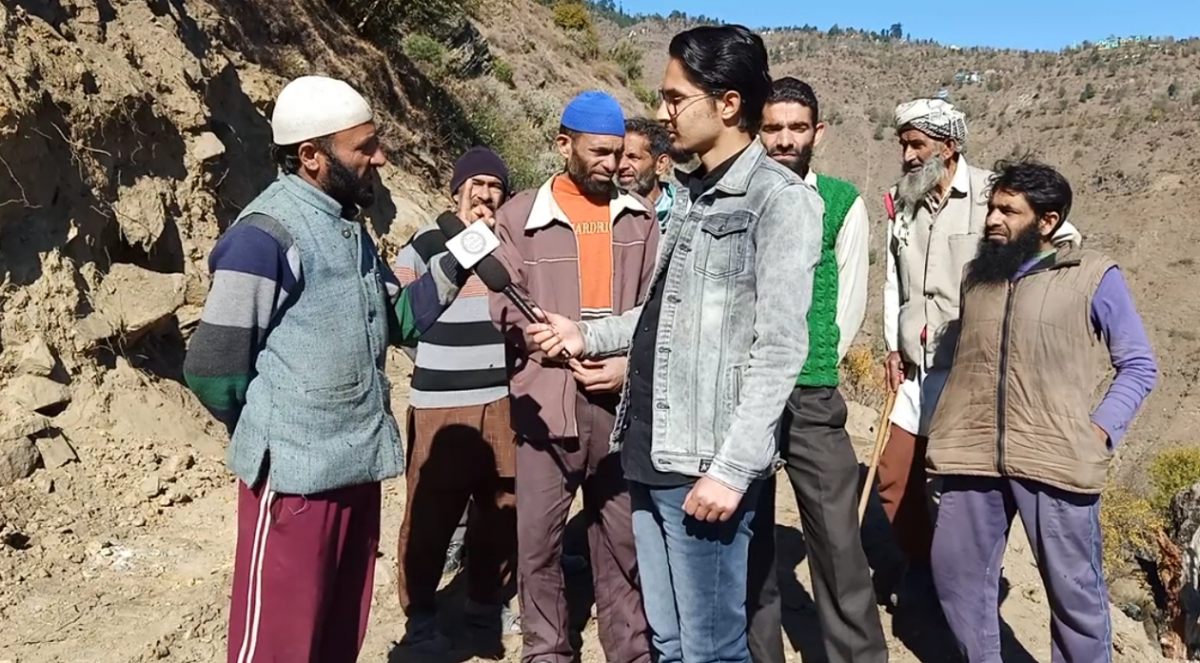 A team member from The Chenab Times reporting on developmental issues in the Chenab valley. Photo: By special arrangement.

“The strength of our news lies in the local language that we use; it is a way we are reclaiming our identity,” said Ayoob. For him, the website was a recourse to preserve the fading languages that, he said, are as precious as heritage passed on generationally.

The team has 15 members who report, document, film and photograph through the peaks and valleys of the Chenab region. While their efforts to provide greater localised access to news is marked by appreciation and applause, it lacks the financial support to sail through the process of news production. The news portal is only able to generate revenue through advertisements, and hence, is only able to pay its staff as money comes in.

Also read: The Right Wing Wants Hindi to Consume Our Languages. We Cannot Let This Happen.

After The Chenab Times completed a year, the impact of their initiative was covered by various local dailies like Kashmir Uzma and Daily Udaan. It was also nominated for the ‘Best News Portal’ award by the Pahari Core Committee, which is an amalgamation of more than 15 literary groups.

Apart from financial challenges, the massive power cuts in the region dampens their zeal to work. Despite being a hub of hydroelectric power projects, the Chenab region has many villages that have low access to electricity. “Not just today, our region has been facing these [power cuts] for decades. Even in winter, our areas remain without electricity for months. To deal with this issue, we use our mobile phones for video editing and managing websites on such days,” Ayoob said, as he described the struggle of running a news portal in the Chenab valley.

While the website’s audience has grown since it started, the funding mainly comes from clicks and their YouTube channel, which has over 48,000 subscribers. Their Facebook page has over 153,000 followers and boasts of 25,000 visitors every month on their news website.

Apart from financial and logistical woes, the team said, severe neglect from Jammu-based politicians keeps the inhabitants of the Chenab valley away from development. Ayoob further said, “Former chief minister Ghulam Nabi Azad, who is from the Chenab region, did a lot of work during his tenure but didn’t explore its full potential.”

For these volunteers who sometimes are the sole sponsors of their stories, each click, share and like is not just a numerical tally of the audience, but it is also a motivation that pushes them to go the extra mile for news in the rugged region of mountains and meadows.