The mid to late 1980s were a point of transition in Gujarat. As the Congress’s hold on power had weakened, the winner in this upheaval was the BJP – and the figure of Latif provided it with the perfect foil. 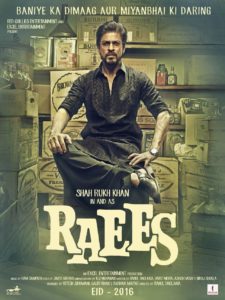 We will soon see Shah Rukh Khan as Raees on the big screen. Raees is said to be a fictionalised account of the eventful life of Abdul Latif Sheikh, the mafia don who dominated the illicit trade in liquor, money laundering, arms smuggling, kidnapping, extortion and more in Gujarat in the 1980s. By the time of his final arrest in 1995, Gujarat’s police had registered Latif and his gang in over 210 serious offences, including murder and rioting. By then, Latif was also linked to the even bigger don, Dawood Ibrahim, and is supposed to have aided the 1993 Bombay blasts.

The don and us

Cinema is fascinated by characters who live on the edge of society, and challenge its norms. Perhaps we enjoy watching our ‘others’: those outside the everyday mundanities of white and blue collar labour who seek only roti, kapda, makan, and the odd luxury. In more nuanced portrayals, we might confront the don with the golden heart, the one who helps his family and community, even as he is trampled by, or occasionally overcomes, the system.

While we place people like Latif outside society and its systems, the ‘other’ to our comfortable and complacent ‘us’, he was, in fact, integral to the making of contemporary Gujarat. As the upcoming film’s trailer tells us, our protagonist had a ‘baniye ka dimaag’, combined with ‘miyanbhai ki daring’. What was it that Latif traded that needed particular audacity? Latif traded in various resources that are valuable to us, but ultimately his dealings were in power. In this core business, he was deeply intertwined with Gujarat’s police, politicians, business, and government.

The spirit of the state

It is evident to anyone who knows anything about Gujarat that its prohibition laws are a sham. The longstanding ban on alcohol creates a highly valuable market that thrives on artificial scarcity. You can access any sort of liquor in Gujarat’s towns and villages, but at an inflated price. The business networks around the liquor trade profit state and non-state actors. The police takes as much as 40% commission for aiding, or at least ignoring, the trade in liquor. The Election Commission estimated that alcohol worth nearly 13 crore rupees was seized in Gujarat during the 2014 national election. Alcohol lubricates our democratic processes. Latif and his ilk are cogs in this massive machine.

While the state is all-too-present in some of Latif’s story, his rise is also explained by the absence of formal government institutions in other contexts. This has resulted in parallel institutional structures that provide state-like services of welfare and security. Latif grew up in inner city Ahmedabad, which has been plagued by repeated caste and communal violence. A major riot occurred in 1969 – with 30,000 Ahmedabadis displaced, rendered homeless, unemployed, injured and killed. The majority of victims were Muslim. For instance, in government records, of the 6,742 properties that were damaged, 6,071 belonged to Muslims. Many of these properties were near police posts, but still lacked protection for reasons of omission or commission.

Partisanship in government has only increased with time, as evidence from communal violence in 1985, 1992, 1998 and 2002 tells us. The spaces vacated by the state tend to be occupied by other big men, and very occasionally women. Latif is one such parallel service provider, who is said to have generously channelled money, food, protection and jobs to the besieged of his community.

It is no surprise that the beneficiaries of Latif’s power and protection elected him to public office from not one, but five seats, in the Ahmedabad municipal elections of 1987. Though he had links with many of Gujarat’s politicians, including former and future chief ministers, Latif contested the election as an independent, from within jail. The institutions of policing, politics and government had mostly tolerated and even collaborated with Latif till this point. But election to office was a step too far. The ‘other’ had crossed too openly and audaciously across the boundary to ‘us’ and needed to be visibly put down.

The mid to late 1980s were a point of transition in Gujarat. The Congress’s hold on power had weakened, with one of the final blows coming from rioting orchestrated by opposition parties and groups in 1985. This resulted in the resignation of the popularly elected Congress chief minister, Madhavsinh Solanki. Subsequent governments led by the party were much weakened, and by the early 1990s depended on shaky coalitions. The winner in this upheaval was the BJP, and the figure of Latif provided it with the perfect foil.

Election campaigns of the time contrasted Latif Raj with the BJP’s promised Ram Raj. The tainted, criminal Muslim and his discredited political backers were pitched against the purity and promise of Hindutva. When Latif was killed by the police in custody in 1997, on the pretext that he had been trying to escape, celebratory crackers were burst in parts of Hindu, middle class Ahmedabad. Prominent Hindu leaders such as Keshubhai Patel of the BJP were lauded as Hindu hriday samrats, or kings of Hindu hearts, for vanquishing the devil. The devil, of course, lies without and within.