Behind the glamour and awards lies another story, about the importance of documentation, synthesising information, consistency and follow up. 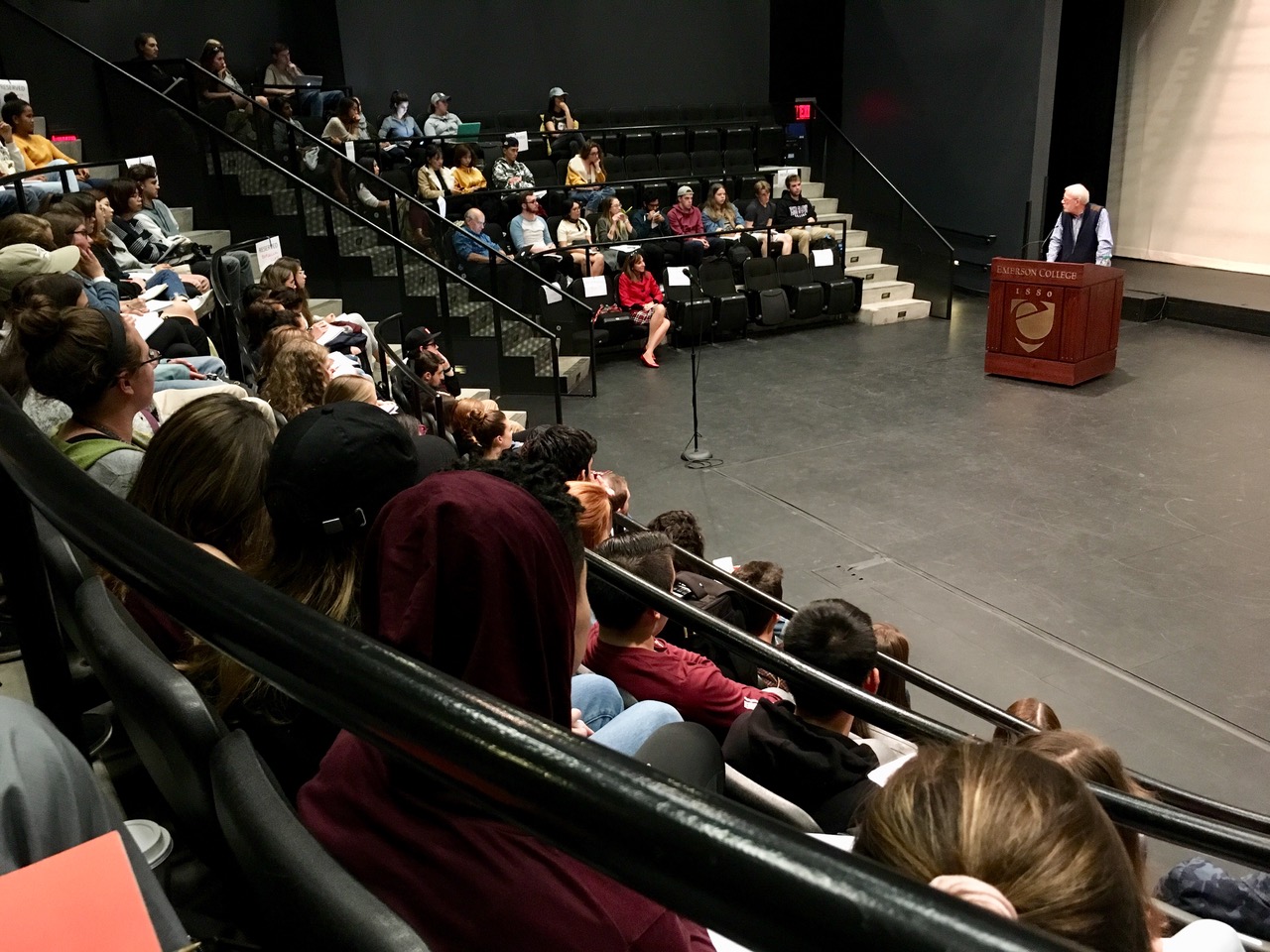 Boston: Hearing Walter Robinson talk about the process behind the most well-known investigation by the Boston Globe’s Spotlight team that he led, I’m struck by some universal truths that emerge from his reflections.

The Oscar winning feature film Spotlight (best picture, best screenplay, 2015) is based on the story of how Robinson’s reporting team in 2002 exposed the Catholic Church’s cover-up of child sex abuse by its priests. The Globe won a Pulitzer in 2003 for public service for its coverage of the issue.

But behind the glamour and awards lies another story, about the importance of documentation, synthesising information, consistency and follow up. That is the first truth I take away from the wide-ranging talk by Robinson, now the Globe’s editor at large.

In June 2002, the Boston Globe published a book, Betrayal: The Crisis in the Catholic Church, based on the reports published until then. The following year, Robinson hammered out a 2,000-word piece “within a few hours” for Harvard’s Nieman Report (March 2003) outlining what lay behind his team’s string of over 900 reports by then.

The Columbia Journalism Review (CJR) published a 22-page case study in 2009 about the journalism involved in this series. The author was young novelist and freelance writer David Mizner. A couple of years later, while discussing the possibility of a film based on one of his novels with Hollywood producers Nicole Rocklin and Blye Faust, Mizner pitched the idea of a film based on his CJR report.

The enthusiastic producers flew to Boston. The Globe journalists, initially somewhat bemused and wary, gave the young filmmakers rights to their story and agreed to work with them. They didn’t expect much to come of it.

Also read: Spotlight is About Journalism as it Should be, But Isn’t Anymore

Two years on, things were moving. Rocklin and Faust had got a screenplay written and got some of the casting done, starting with Mark Ruffalo (nominated best supporting actor for his role as Michael Rezendes) whose enthusiasm helped attract other big-name actors. Michael Keaton (Robinson in the film) and Rachel McAdams (Sacha Pfeiffer) came on board even before the money had been arranged. This helped secure the finances.

The production budget for Spotlight, $20 million, was frugal by Hollywood standards. Compare it to the budget of the multiple Oscar-nominated (but not winner) The Insider, 1999, based on the true story of a journalist and a whistleblower from the tobacco industry: $90 million. That’s the equivalent of $129.5 million today, going by the average rate of inflation.

Spotlight was also “extraordinarily faithful” to reality, despite some dramatisation. But it still only touches upon the drudgery and painstaking work behind the front-page reports. Two and a half minutes of drama in the film represents, as Robinson puts it, “three and a half weeks of hell”. 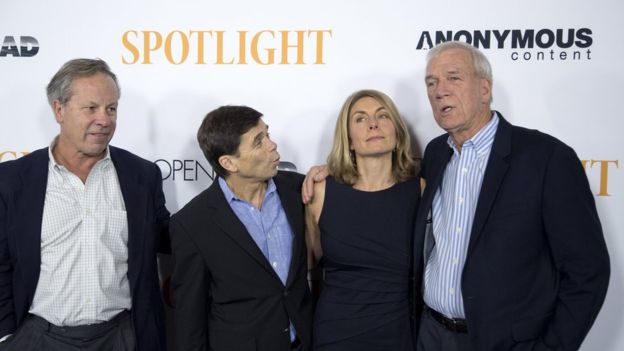 A great deal is not in the film. Understandably so – “Most of what we do is pretty boring”. Like making a list of every lawyer who ever worked on a sex abuse case, ploughing through 1,500 docket numbers or conducting scores of interviews including many difficult conversations that never even make it to the story.

A third truth is that the work doesn’t stop when you break a story, even if that’s where the film ends. Real-life reporters have a responsibility to follow the story. In the case of the paedophile priests’ scandal, survivors are still coming forward. Not all stories make it into the Globe’s reporting (survivors can contact the non-profit Survivors Network of those Abused by Priests for support). Another aspect now emerging is that of children of Catholic priests.

There’s a David-and-Goliath-like aspect to the Spotlight church scandal story. A small team of just four journalists initially, later eight, took on the issue, countering the might of organised religion. They faced threats, social pressure and stonewalling.

“What kept us going was our outrage – it kept us focused,” says Robinson referring to their motivation as an “emotionally sustaining goal”. He and his team were driven by the compulsion to get the story “out there” as they discovered that this was not just about a few cases. The Church had covered up for as many 250 priests in the Boston area accused of child sex abuse.

The focus of Spotlight’s reporting increasingly became not so much what the priests had done but how and why the Church allowed it to happen and engaged in a systematic, expensive cover-up to protect its reputation. Victims were paid off and offending priests were sent on ‘sick leave’ – including to a mansion coincidentally in Robinson’s neighbourhood – or transferred from one parish to another.

The Spotlight reporters, Bostonians and ‘lapsed’ Catholic, were insiders to the community whose priests they exposed. They were also part of a culture where questioning the Church was almost unthinkable and aroused suspicion rather than sympathy.

Fresh from the Miami Herald – “just about everything” in the state of Florida is a matter of public record – the new editor Marty Baron asked the Globe reporters to do something they had never considered: go to court to get records unsealed. That fresh pair of eyes, an outside perspective, is what got the ball rolling.

Once they were on the trail, being insiders was an advantage because they spoke the language, so to say. It also made things more difficult as they were dealing with a sacred cow (something those of us from India and Pakistan are sadly all too familiar with).

The Globe exposé paved the way for the accountability of a religious institution that had until now been almost untouchable. There had been other reports in other newspapers including the Globe itself before, but this series exposed the Catholic Church’s pervasive cover-up rather than tackling individual cases.

It led to legislation requiring priests to be added to the list of “mandatory reporters”, like doctors, nurses and teachers, who are legally obligated to report sex abuse if it comes to their knowledge. The Catholic Church in the US today has a zero-tolerance policy towards child sex abuse. Other states in the US have followed up such cases more vigorously.

This underscores a fourth universal truth emerging from Robinson’s talk: “Iconic institutions need as much scrutiny as the political”.

The fifth truth: “It is not possible to be objective” for journalists, especially about issues that have strong elements of right and wrong. “You can have a personal conclusion about what is right and wrong, but you then have an extra obligation to give the other side a fair shake,” as Robinson puts it.

I would add that this should not mean creating the false equivalence that we so often see, particularly in television journalism which is increasingly entertainment and ratings-driven.

And lastly: You can’t have a functioning democracy without the work that journalists do.

In this age of flux, as old revenue models are severely tested and new forms of media and journalism crop up, Robinson believes that sooner or later, someone will figure out a revenue model for the media that also sustains journalists.

Meanwhile, what we as journalists can do is, Robinson says, “continue to do what we do – produce solid, verifiable facts”.

Beena Sarwar teaches journalism at Emerson College, Boston, where Walter Robinson addressed students on October 3, 2017. She blogs at www.beenasarwar.com and tweets at @beenasarwar