Singing Away the Coronavirus Blues: Music in a Time of Crisis Reminds Us We Belong

Music is an antidote to the growing sense of alienation and isolation in society in general, particularly so in the time of isolation and social distancing. 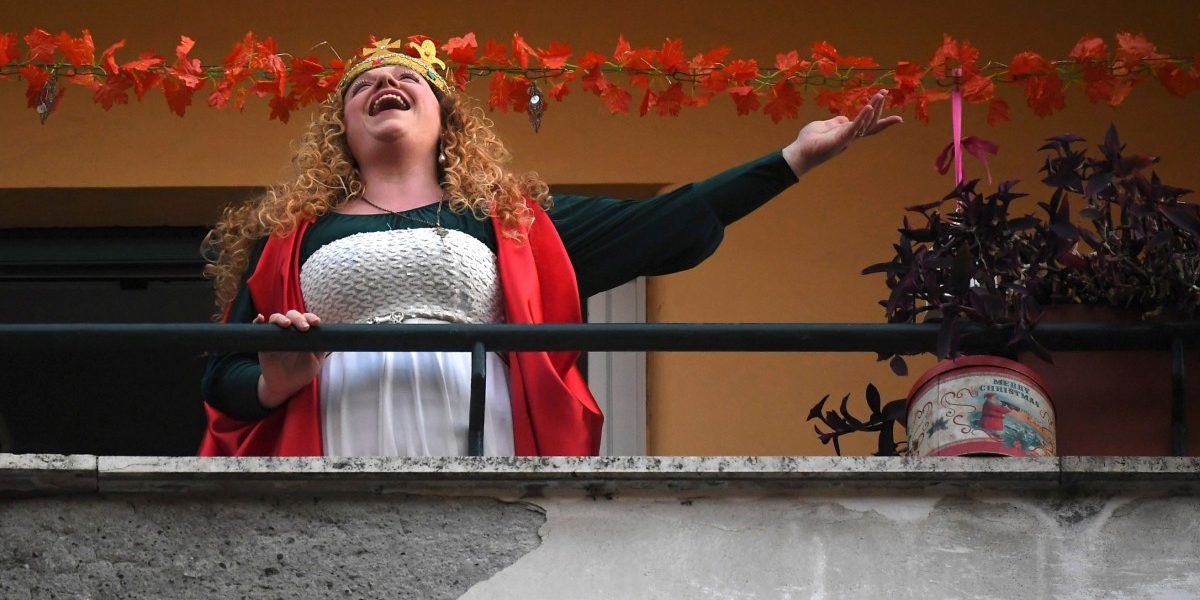 With constraints on our movements and general way of life becoming more and more restricted, we are feeling a loss of control not experienced since the second world war.

In being confined to our homes, we are missing our normal social support from friends and family, and our freedom to control our day-to-day lives. Residents clap and bang utensils from their balconies to cheer for emergency personnel and sanitation workers who are on the frontlines in the fight against coronavirus, in Noida, India, March 22, 2020. Photo: Reuters/Anushree Fadnavis

But making music provides a means to regain control.

People in Spain have been filmed acting out with music, creating duos across apartment buildings.

The citizens of Wuhan chanting “Keep it up, Wuhan!” and singing patriotic songs from their windows encouraged themselves and their neighbours in their efforts to save their city.

In Italy, citizens have been playing instruments and singing from their balconies during their lockdown.

Also read: Social Distancing and Antipathy in the Time of COVID-19

Parodies on YouTube are both lifting community spirits and reminding people to look after each other – not just themselves.

For some, this behaviour might have begun with trying to break the tedium of staying confined at home. But others clearly wished to support their community in one of the only ways they had left available to them: by making music.

Why do we sing during times of crisis?

Music creates a sense of belonging and participation.

It is an antidote to the growing sense of alienation and isolation in society in general – even more so now we are being asked to actively practise social distancing and isolation.

Social distancing and geographical isolation do not have to result in social isolation. In the face of uncertainty and panic, music is a social balm for soothing anxiety, enhancing community connections and acting in defiance of a threat to community spirit.

We have seen this before. People sang as flames tore through the roof of the historic Notre Dame Cathedral last April: hymns in the streets when Parisians could do nothing else to save the beloved icon.

This spontaneous reaction seemed to reflect the need of Parisians to reassure each other that, even though the cathedral was being destroyed before their eyes, their community would continue.

The music also seemed to be offered to the cathedral itself – reassurance that she was being supported by her community in her time of need.

During the coronavirus crisis, community support has evolved from a series of spontaneous musical flash mobs to connect with each other to coordinate displays of appreciation – including clapping, shouting and singing – to acknowledge the health workers on the front lines.

Much like singing, this external expression of gratitude is helping people to cope in times of crisis: providing personal and social development, mental health and well-being benefits, and community strength and harmony.

Also read: Culture in the Time of Coronavirus

We don’t know exactly when we started to make music.

Finding the first evidence for singing – likely our first foray into music – is impossible, though instruments dating back some 40,000 years have been found in Europe. These bone flutes would not be the first instruments to be created, however, as they already show signs of complex design and most musical tools, such as skin drums, couldn’t survive the many thousands of years to discovery by an archaeologist. Today, music is the most consumed form of culture. People listen to music to regulate their mood, to achieve self-awareness, and as an expression of personal and collective identity and social relatedness.

The ability of music to increase social cohesion and direct human attention was probably a key reason for its development throughout human behavioural evolution, allowing early humans to convey emotions and intentions effectively. This communication could prove decisive in times of stress, and ultimately mean the difference between life and death.

Now, we are seeing this age-old human adaptation once again being mobilised in response to the COVID-19 pandemic to keep communities pulling together.

Music has not yet lost its importance for humanity.