Shahid sahab or Shahid bhai, as he was called by most, was not a writer or a poet himself but helped many become successful writers, poets and researchers. Since the onset of the pandemic, so many gems from the world of Urdu language and literature have been lost that I have now lost count. It was only last year that a few of us compiled a list of at least 75 Urdu writers and poets who had passed away. It included the likes of Shamsur Rahman Faruqi, Anand Mohan Zutshi ‘Gulzar Dehlvi’, Rahat Indori, Mujtaba Hussain, Nusrat Zaheer and Asrar Jamayee. Notably, this list does not include any Urdu writers, poets, researchers and translators outside India.

This year so far, we have not been able to gather the courage to collate such a list. I am sure the numbers are higher than last year, even though we are still to go through more than half the year. While it’s true that not all succumbed to the virus, the pandemic coupled with the lockdown ensured that most of the friends, admirers and other Urdu lovers were deprived of having one last glimpse or participating in the last journey of their favourite literary heroes.

One such person was Shahid Ali Khan, whom we lost in April this year. He passed away in the wee hours of April 21. This news was not wholly unexpected, as he was 91 years old and was not keeping well for the past few months. Despite that, when the news of his death reached me, I was engulfed in an inexplicable layer of grief. In fact, I felt more helpless than sad. Helpless because despite my strong will to participate in his last journey, I could not do so as I was down with a high-grade fever myself and had been briefly hospitalised due to COVID-19.

Shahid sahab or Shahid bhai, as he was called by most, was not a writer or a poet himself, but he helped and enabled many to become successful writers, poets and researchers. Ram Prakash Kapoor, who retired from the Bhilai Steel Plant, recounts in an article that Shahid sahab encouraged him to write in Urdu and invited him to write a guest editorial for one of the issues of Kitab Numa, a magazine of which Shahid sahab was the editor. Thanks to Shahid sahab’s constant encouragement, Kapoor went on to author at least two books in Urdu after his retirement. 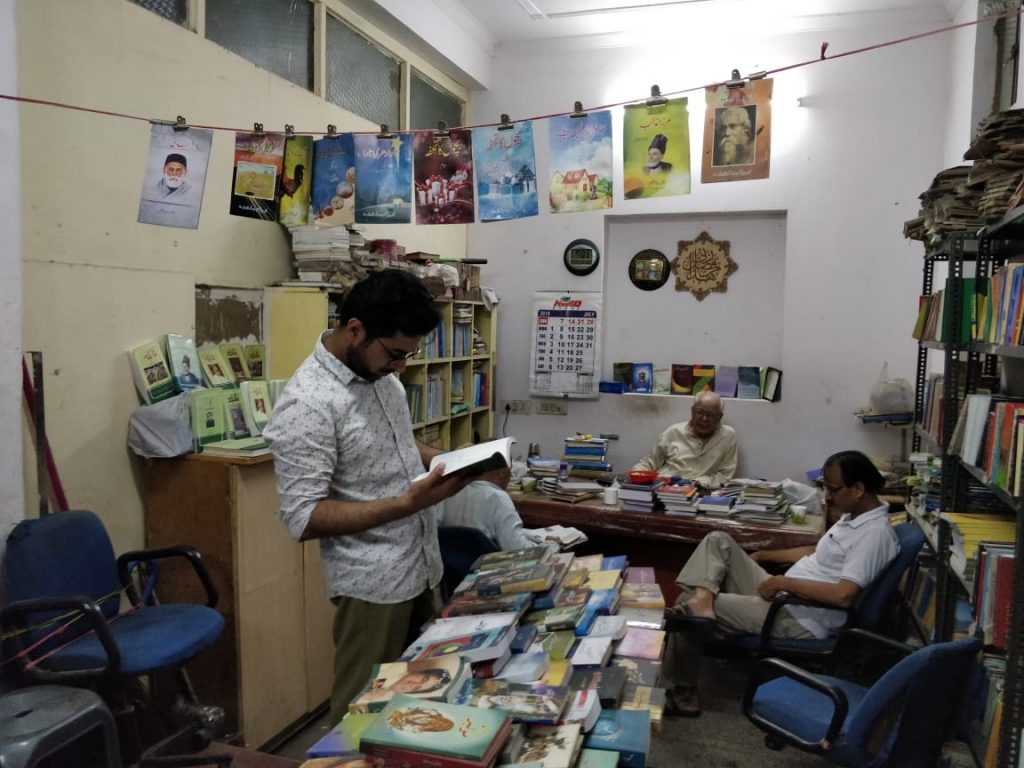 Like Kapoor, there are probably dozens of writers who were nourished by Shahid sahab during his lifetime. Amongst his admirers included noted writers such as Shamsur Rahman Faruqi, Mujtaba Hussain, Shameem Hanafi, Sughra Mehdi and Sadiq-ur-Rahman Kidwai. For many years, he was also associated with the Maktaba Jamia, the Urdu publication division of Jamia Millia Islamia. The Maktaba is one of the largest and longest surviving Urdu publishers in India. He had joined the Maktaba in 1951 as a junior clerk and retired as its general manager in 2006.

He had also worked as the in-charge of Maktaba Jamia’s Mumbai branch. According to noted screenwriter and playwright Javed Siddiqi, there was a time when the Maktaba in Mumbai used to be packed with writers, poets, journalists, professors and (then) young lovers of literature like him. So much so that people had to take refuge on the steps of the Maktaba and the footpath outside it. It was a place for debate and discussions on issues related to literature and beyond. Every Saturday evening witnessed a literary gathering in which Urdu lovers from across the city used to participate.

It is here that he befriended writers and poets like Jan Nisar Akhtar, Meena Kumari, Sahir Ludhianvi, Kaifi Azmi and Jagan Nath Azad. Some of them were regular visitors at the Maktaba. There are several interesting stories about their friendship which can be heard here in his own words. Though he had left the city several decades ago, several Urdu writers and journalists who used to visit the Maktaba (located near JJ hospital naka) would tell me of how they missed Shahid Sahab’s presence.

He continued to attract and host Urdu lovers in Delhi. It would often happen that whenever an Urdu lover visited the city, they would make it a point to meet him. One of the reasons behind this was that he possessed an encyclopaedic knowledge about Urdu and its literature. He also often had Urdu books which were not available in the market. At times, he would also make arrangements for books on request.

After his retirement from the Maktaba, he started an independent publishing house and book store in Jamia Nagar by the name of Nai Kitab and a quarterly literary journal by the same name. It is here that I met him for the first time in 2007. Though the magazine ceased to be published after a few years – owing to his growing age and deteriorating health, he continued with the book shop even though it was time for him to take a break. “The bookstore is like oxygen for me,” he had once told me. It was open till a few months before the lockdown in March last year.

One of the attractions for me while visiting Jamia Nagar (after having shifted out) was to meet Shahid sahab and spend some time at his bookshop. It was not just another bookshop where one would primarily buy books. It was like a centre of learning and Shahid sahab was always there to host you no matter how young one was. He was a guide for those interested in Urdu and wanted to know more about the language and its literature.

During my umpteen visits to the bookstore, I always found him surrounded by people – poets, writers, journalists, researchers and students of varying ages. He would always pay individual attention to each visitor and if you were regular, you were likely to be treated with black tea and chips. It was no surprise then that Urdu lovers missed his warmth when the bookshop was closed.

“It is not just a bookshop but an institution where one got to meet noted writers and lovers of Urdu literature,” young Urdu poet Rizwan Khan, who used to visit the shop at least twice a week, told me last year. “I miss the black tea and chips that Shahid sahib served us with love and affection,” he recalled, adding that “he is a storehouse of information, and several veteran writers were his friends, so he would tell us stories all the time.”

In my own case, after enquiring about his khabar-khairyat on each of my visits, he would say, “Achcha aap bahut dino baad aayen hain, ye nayi kitaabein aayi hai dekh lein (You’ve come after a long time, here are some new books for your perusal),” pointing towards the book rack where new arrivals were kept or those that were on his table. It is no surprise to me that some of the best Urdu books in my personal library are from his shop, often on his recommendation. I had been reading the works of noted Urdu writer Shaukat Thanvi in the past few days, all brought from his shop and which are either out of print or seldom available in the market. 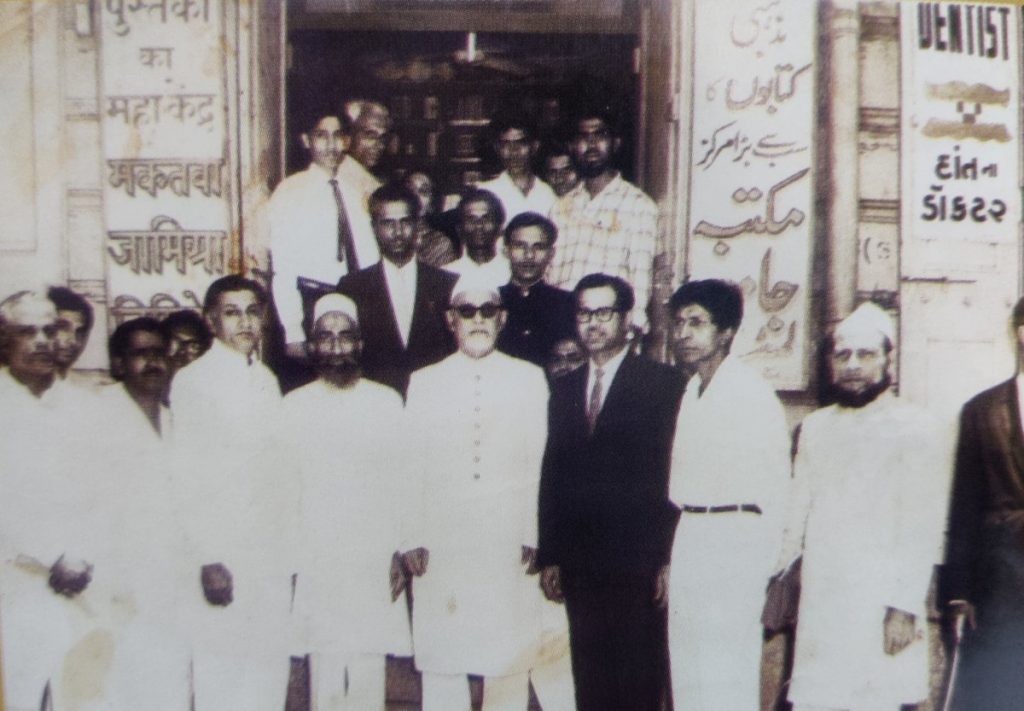 It is our misfortune that despite requests from several admirers, he never paid heed to write his biography or memoirs. Had he done so, we would not have been deprived of the knowledge and stories which have now gone with him. In my understanding, he didn’t write his memoirs for two reasons. He was always busy with work and never had the time – so much so that his children would say that the Maktaba (and later, Nai Kitab) was his first love. Secondly, and more importantly, he hardly ever spoke about himself.

He had a special interest in young researchers of Urdu. God only knows how many of them he has helped by supplying important books and literature for their research, providing guidance (what to read, whom to interview or contact) and getting their work published.

There are many who claim to be, or are often referred to as Khadim-e-Urdu (Servant of Urdu). But I have not met a servant of Urdu like Shahid sahab. He was a selfless benefactor of Urdu and his services can’t and shouldn’t be forgotten. Now that Shahid sahab is no more, it is unlikely that the bookshop will open again. Even if it does, it will never be the same.