Sanskrit Needs New Study, and Students, Not a Joint Secretary in the MEA 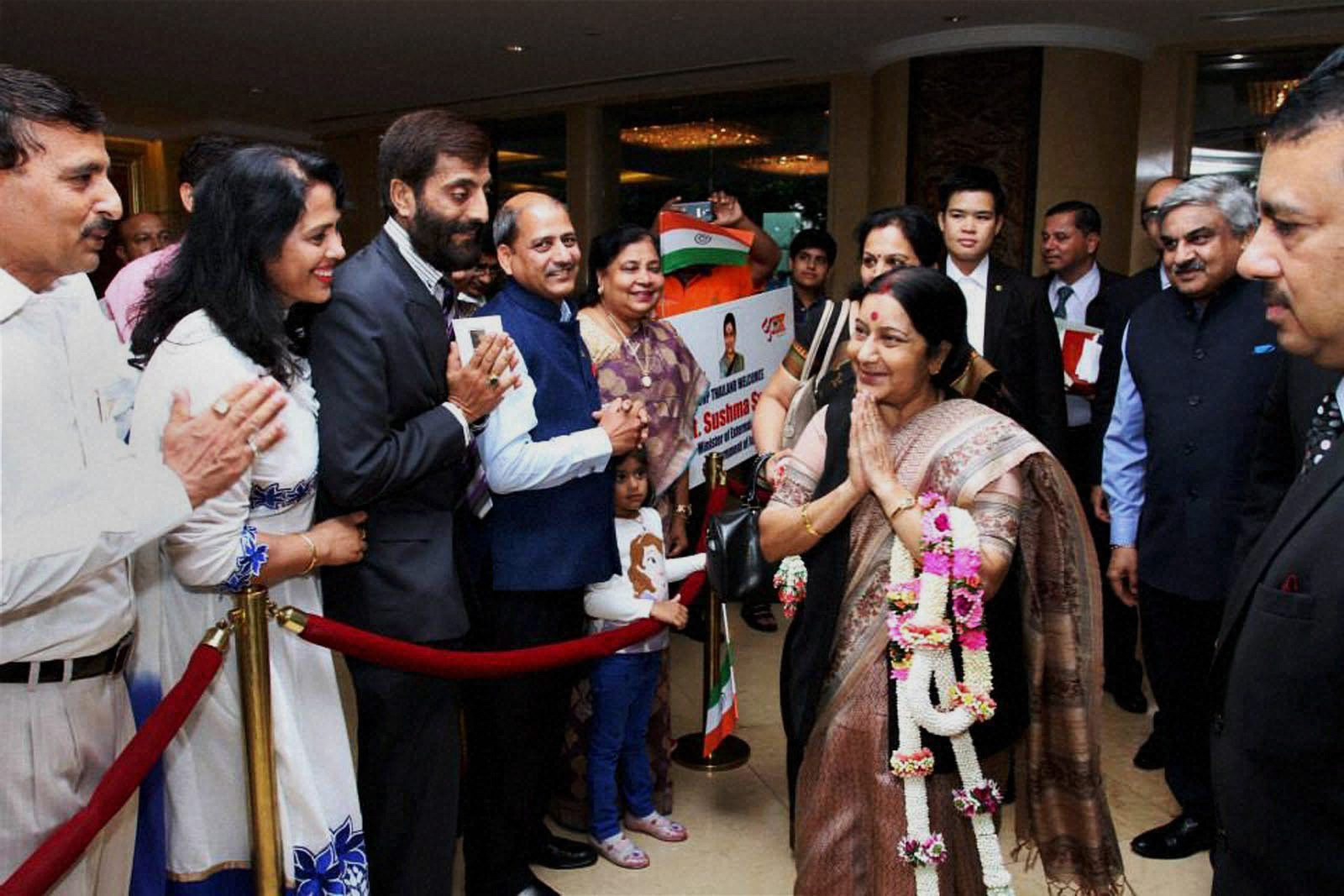 External Affairs Minister greets the Indian community during a reception organised in her honour at Bangkok on Sunday. PTI Photo That is precisely what I felt reading the text of a speech given in Bangkok by our External Affairs Minister on June 28 2015.

The occasion for the speech was the 16th International Sanskrit Conference, the host being Thailand’s phenomenally learned Sanskritist, Her Royal Highness, the Princess Maha Chakri. Present in the hall were scholars from across the world, versed in Sanskrit’s mineral-rich seafloor of intellectual diversity – wisdom, satire, humour, piety, irreverence, romance, erotica, gnosticism, agnosticism, in prose and verse rhymed and un-rhymed, metred in tightly-tied feet as also footloose and fancy free.

But our minister was speaking from a text doubtless given to her by the punditry of official speech-writers. And she spoke to a script not about Sanskrit’s many-splendoured fascinations but its role as the lingua indica.

There was no alternative now but to wish Sushmaji had spoken extempore in her flawless Hindi, making eminent sense from her own understanding of Sanskrit’s role, rather than adhering to what is now clearly state policy, the policy that seeks to make India a secular nation de jure , into a Hindu Rashtra, de facto. Changing de jure statuses is complicated. The process can lead to the ‘other side’ organising legal opposition to the changes. Why mess with the written word which no one reads when many short-cuts are available de facto ?

De factoism is a great ism. It works better than any written law. Let Gandhi be Rashtrapita, Veer Savarkar is our Rashtraguru; let the Constitution of India be a political guidebook, the Bhagavad Gita is our theological guide; let the Supreme Court interpret laws, the Supreme Count – majority-rule – will implement them. What does it matter if the Asokan lions are already on our national emblem? We will depose the tiger from his place as India’s national animal and bring in the lion – the Gir lion – in his place. Sanskrit has works that question, with rigour and effect, religious belief? We will make it the ‘language of the gods’ for we are little gods ourselves.

De factoism is a great realism.

There is no chance that our minister would have been given, as preparation for the conference, the remarkable speech of the late Professor Hiren Mukherjee on ‘The Glory of Sanskrit And Its Relevance To Our Life Today’. A more erudite work on the subject than Hirenbabu’s cannot be expected or received from any pandit of ancient lore. Nor one with a more critically contemporary ring to it.

Hirenbabu quotes Vidura in that speech: apriyasya cha satyasya, vakta srota cha durlabha (for the unpleasing and the truthful, speakers as well as listeners are scarce). And the equally timeless: puranamityena na sadhu sarvam (whatever is old is not, for that reason alone, necessarily right).

Citing the idyllic visions of our ancient texts, he drew attention in that address to the deviations from the ideal. And gave time-honoured descriptions of some current-day types such as dharma-vanijyaka (purveyor of religion).

We have to be wary of dharma-vanijyakas, mantled by power, who would like to, as quietly but as swiftly as they can, reverse engineer the Republic’s biometrics.

We may remind them that theirs is not the first such attempt. And is bound to fail as did the earlier ones. The first such started, in fact, in the Constituent Assembly itself. Meeting on 17 September 1949, the Constituent Assembly took up Dr. Ambedkar’s draft with Article 1 Clause (1) reading ‘India, that is Bharat shall be a Union of States.’ And so, the Preamble apart, the new Constitution of India in its first English draft was to start with the word ‘India’. H V Kamath moved an amendment re-drafting the opening words of Article 1 clause (1) to read “Bharat, or in the English language, India.” Supporting Kamath’s amendment , Seth Govind Das said Bharat as a name that could be traced to the most ancient literatures of India,was the only name befitting the history and culture of the country. Referring to the antiquity of ‘Bharat’, he quoted the Vedas, the Upanishads, the Brahmanas, the Bhisma Parva of the Mahabharata, the Vishnu Purana and the Brahma Purana.

This could have been part of Sushma-ji’s background briefs for Bangkok.

Moving to less ancient times, Seth Govind Das said Hiuen Tsang had referred to the country as ‘Bharat’. For him there was no doubt that the time had come for ‘India’ to become ‘Bharat’ once again.

Then came the turn of the erudite Pandit Kamalapati Tripathi of Varanasi to speak. Turning to the chair, Tripathiji said in chaste Hindi, “Sir, I am enamoured of the historic name – ‘Bharat’”. He said, “The Gods have been remembering the name of this country in the heavens…” In fact, “The gods have a keen desire to be born in the sacred land of Bharat.” As pious as he was learned, Tripathiji’s evocations were fervent. He referred to Sri Rama ‘twanging the chord of the bow’ which ‘sent echoes through the Himalayas, the seas and the heavens’. At this point, a member rose. It was Dr. B R Ambedkar himself. ‘Is all this necessary, Sir?’ he asked the Chair. Tripathiji tried justifying his argument. Dr. Ambedkar interrupted tersely, ‘There is a lot of work to be done.’

Like,  let us assume, Sushmaji, Kamalapatiji was a Sanskritist. But he was also a pragmatic Congressman – the two attributes being proverbially inter-changeable. The pragmatist in Tripathiji now took over and in a spirit of admirable accommodation he congratulated Dr. Ambedkar for having brought ‘Bharat’ into the formulation at all, albeit after ‘English’. The amendment proposed by H V Kamath and backed by Seth Govind Das and Kamlapatiji putting ‘Bharat’ before ‘India’ was put to vote by Rajendra Prasad. The Assembly divided by a show of hands. The amendment was defeated, rather narrowly: 38 supporting Kamath, 51 supporting Dr. Ambedkar’s formulation. A difference of 13 hands gave us ‘India, that is Bharat’, rather than ‘Bharat, that is India’.

That is the India that is now once again, de facto rather than de jure, up for an ‘amendment’.

Sushma-ji said in her Bangkok speech that the ICCR was going to give an international Sanskrit Award every year bearing $20,000 to “the scholar who has made significant contribution for Sanskrit” (sic) and Fellowships to “two deserving foreign scholars for conducting research in India in Sanskrit language or literature” (sic). The awardees have to be “foreign” and should be “contributing for Sanskrit”.

Indian scholars of Sanskrit are out of the reckoning. Sushma-ji’s remit being what it is, it has to confine itself to “foreigners”. Well, there is more on that street. The Ministry for External affairs, she said, is going to show its seriousness by appointing a Joint Secretary for Sanskrit. The only Joint Secretary in the MEA who will be ‘handling’ a language will be handling not a language that India can use in diplomacy but the language which in Sushma-ji’s words is “sacred by itself, it sanctifies all that come into its contact… purifies the minds of the people and thus sanctifies the whole world.”

I love Sanskrit,  I do not worship it. I delight in it , I do not go down on my knees before it. Do not, Sushma-ji, try to embalm or enshrine Sanskrit in a new reliquary. Rather, release its latent energies, enfranchise it, make it available to the people of the world not as a disinfectant but a great new energiser of the human intellect. Dara Shukoh had the Upanishads done into Persian. Scholars the world over have translated Sanskrit works into various languages, are doing so even now. Sanskrit needs new study, fresh analysis, theist and non-theist. It needs students, it does not need a Joint Secretary.

Sushma-ji has left the Emperor Asoka behind. That king wanted his officers and ministers, his Rajukkas and Amatyas, to venture out using only the local prakrits, and he had his edicts carved not in Sanskrit, but in various dialects of Prakrit, such as Magadhi-Brahmi. How un-visionary! He did not found an invincible Bharat. He did not try cleansing, purifying the Great Unwashed. He only established Dhamma. The Way To Doing Right.

His ideological descendants, however, are not that weak. Even if they won out in 1949 by a mere 13 votes, they did prevail. And will, again, over the new dharma-vanijyakas.

Gopalkrishna Gandhi, a former Governor of West Bengal and a former high commissioner to Sri Lanka, is now Distinguished Professor in History and Politics, Ashoka University

Note: A reference to Ashoka’s edicts being carved in “Pali” has been changed to “various dialects of Prakrit, such as Magadhi-Brahmi”, which is sometimes conflated with Pali.