Many cultures have meanings that are linked to their own interpretation of how the rainbow is formed. However, the local usage of indigenous terms is in danger of disappearing. 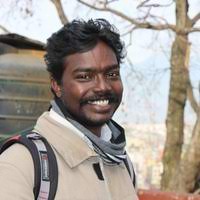 When I was carrying out fieldwork among the Newah of Thecho village in Kathmandu valley, a rainbow appeared and the kids in the village started to shout ‘Lãyelãmã’ with joy. As a student of anthropology, I was intrigued and wanted to find out what it means and how it tied in to Newah culture. So, I asked why they call it Lãyelãmã.

One of my friends in the village told me that it is an informal term, mostly used by children. Lãyelãmã roughly translates to an expression of joy upon seeing a magical thing. However, there are two other names used by the Newah for the rainbow – laḥsāḥ (meaning process of pulling water), which is as scientific as it gets, and kapã (meaning the earthen lid used while cooking, as the rainbow is a half-circle that resembles the lid), a cultural reference to something used daily.

My friends also asked me what the rainbow is called in my language. I told them that it is vanavill and Indradhanush in Tamil and Telugu respectively, the two languages I associate myself with. But their question also caused me to wonder how these names came about.

Environmental determinism, the anthropological concept, postulates that the environment in which a culture is located determines many of its traits such as attire, food, kinship and economic relations. Similarly, naming or cognitively inferring a natural phenomenon such as rainbow (and also the waxing and waning of the moon, a solar eclipse, thunder, rain) is also determined by the environment that a particular culture is located in.

Intrigued by different non-religious and religious names used in Tamil and Telugu cultures for the rainbow, I started enquiring among my friends from various cultures what the rainbow is called in their languages. Some failed to recollect the native term used for rainbow. They asked others and got back to me. When I asked them to break up the term for me, some of them could only provide a rough translation. It also made me realise that across Indian languages, the terms used for the rainbow are heavily subjected to religious politics and cultural hegemony.

Also read: Book Review: Reading ‘the Gita’ Without Glossing Over Its Contradictions

One of the famous terms used for the rainbow is Indradhanush, indicating the bow of the God Indra. Other terms include Inderani/Indra Dhanush (Nepali); Indra Dhanush (Marathi, Rajasthani, Hindi, Gujarati and Telugu); Indra Dhanu (Odiya); Indra Dhenu (Assamese). Indra in Hindu mythology is considered the king of gods, the wielder of the Vajraayudha who brings rain as the god of thunderbolt.

However, when was the last time Hindus worshipped Indra as a part of the pantheon? Why is it that a God who is not worshipped popularly anymore is associated with the rainbow? One possible explanation is that the above languages were subjected to Sanskritic influence. Subjected to this cultural hegemony, these languages eventually give was to the use of Sanskrit terms as it is portrayed as superior language and hence worth imitating to claim a higher status for their own language.

Indra’s deeds may have been forgotten by the masses or they may not be deemed morally acceptable when compared to current standards. His controversial mythological stories include fathering Arjuna, trying to snatch away the bodily armour of Karna to save Arjuna and impersonating Gautama to seduce Ahalya. He was also threatened and dethroned by asuras in various mythological stories.

What if religious politics demands that a more prominent and popular deity should be used to refer to the rainbow? Manjari Katju in her book Vishwa Hindu Parishad and Indian Politics (2010) argues that Ram was chosen as the mobilising force by the Sangh parivar to push the Hindutva agenda among the masses. In Bengal, where Shakti (Durga and Kali) worship is prevalent, the Sangh is making a deliberate attempt to bring mythology related to Ram and Ramayana into the forefront and sideline the worship of these goddesses. 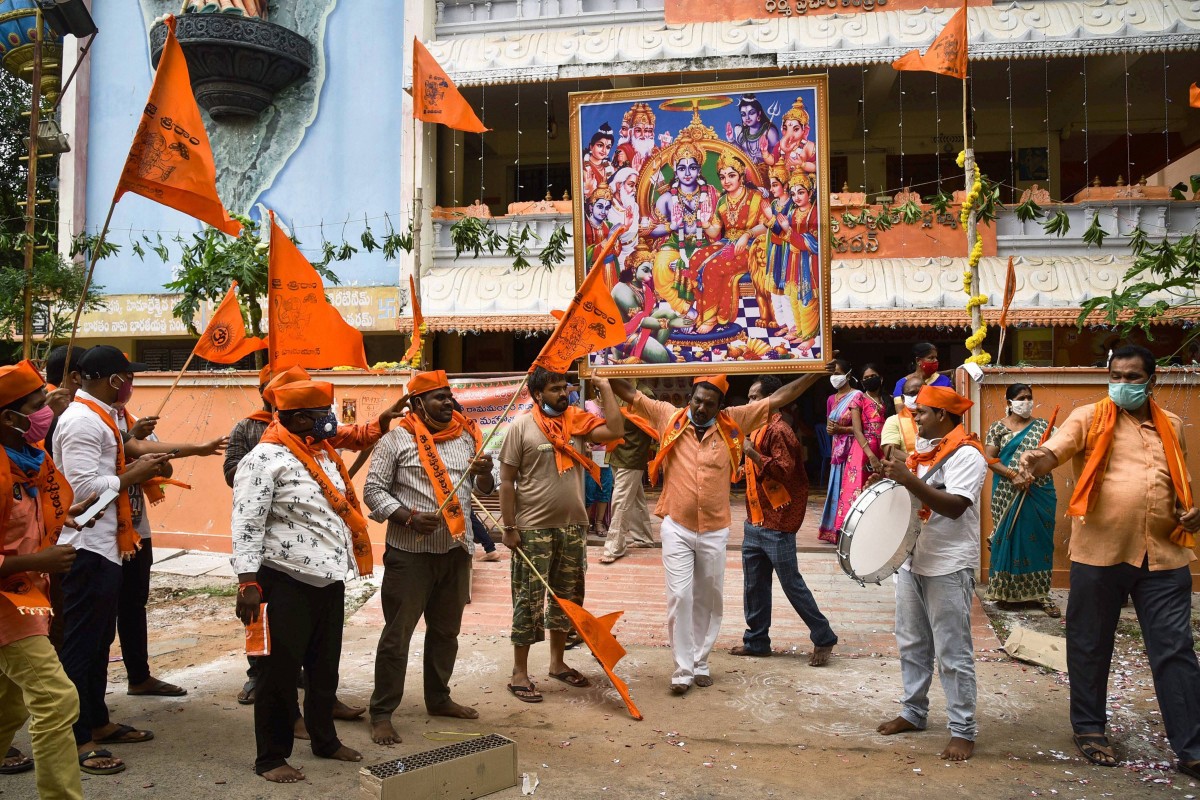 As a part of this attempt, the Rong Dhonu (the bow of colours, a non-religious reference) was eventually changed to Ram Dhonu (the bow of Ram). However, the Sangh narrative has the story the other way around – that Ram Dhonu was originally used, and ‘secular’ clout sought to undermine Hinduism by changing it to Rong Dhonu. Other languages such as Assamese and Hindu Kashmiris also use Ram to refer to the rainbow.

Kamadeva is often considered as the god of love, lust, pleasure and desire. Some of these feelings may not be acceptable to the current Hindu morality. Kama was also persuaded by other deities to disturb Shiva while the latter is meditating after Sati’s demise. Shiva punishes Kamadeva by burning him to ashes when he shoots the arrow of love. Nonetheless, it is interesting to see that in Kannada, Kamadeva is used to refer to the rainbow, as Kaamanbill (the bow of Kama). Kama, as the god of love, rides a parrot, wields a rainbow (in other depictions a bow of sugarcane) and shoots arrows to kindle love.

In Kashmiri, there are two word for the rainbow: Ram Ram Badren Dhoon (by Hindus with clear reference to the bow of the lord Ram) and Ramzan Badren Byuen (by the Muslim population, which translates roughly to Ramzan with the skin of seven colours, like the chinar tree). The Kashmiri term also includes the chinar tree, which is seen only in the Kashmir valley and changes colours fives times as the seasons change.

In the Bhutia language spoken by the followers of Buddhism in Sikkim, a rainbow is called Zha/Dza. In Buddhism, a rainbow is believed to be the sign of auspiciousness. It is believed to appear during the birth of a child or the death of a high-ranking lama or monk. If a person does something good and does not seek popularity, the Dhakini comes to bless the soul. Dhakini or Khandoma (angel guardian of Dharma) usually comes to bless a soul. The angels use the rainbow as their path. The rainbow can also be roughly translated as the way of Dhakini.

In the Lotha Naga dialect, the rainbow is called Sungrheka/Tsungruka (a line of vibrant seven colours or colours aligned in the sky). However, my friend also added that because of Christian influence, most people see rainbows as a sign of promise that God will never end this world again with water (Genesis 9:8-15).

For various socio-political reasons, some Indian languages have managed to resist cultural hegemony and use non-religious termss for the rainbow. In Tamil, it is known as vanavill (the bow in the sky). My mother tells me that she remembers her grandparents predicting that year’s rainfall by observing the rainbow. Tamil Nadu is known for resisting the influences of Sanskrit or Hindi and consciously made efforts to de-Sanskritise various names.

Kerala, whose population comprises Hindus, Muslims and Christians, calls the rainbow mazhavillu (the bow of rain). Other non-religious references include Saptarangi (the one with seven colours)/Meghdhanush (the bow of clouds) in Gujarati; Satrangi (the one with seven colours) in Punjabi; Kamman-E-Rung (the arch of colours), Dhanak or Dhunak (bow) in Deccani/Hyderabadi Urdu.

For many cultures, the names for the rainbow are rooted in the phenomenon that they observe in their day-to-day reality or their own interpretation of how the rainbow appears. Sumi Nagas refer to the rainbow as Milisu (which translates to the process of different colours of rays climbing the sky). In another interpretation, Mili means fire flame/tongue and Su implies stretching out.

Ao Nagas refer to the rainbow as Tongnusen (rain that occurs while the sun shines in seven colours). In the Kok-Borok language spoken by the Tripuri population in Tripura, the rainbow is called Twi Chokhreng (Twi= water body, Chokreng = combination of colours, it is believed that the rainbow is rising from a water body). These languages seem to have a minimal influence of cultural enforcement. However, almost all my friends who helped get this information had to ask others, indicating that the local words are in danger of disappearing.

I asked my mother-in-law Udaya Lakshmi, a journalist and a Telugu literature expert, for some synonyms for rainbow in Telugu. She noted that in Telugu, the rainbow is also called Harivillu (bow of the Hari/Vishnu), Arivillu (bow of the rain) and Singidi (a half bag of grains is referred to as Singidi).

Another interpretation equates the Singidi with Bathukamma, a pot that is decorated with flowers of different colours during the eponymous festival in Telangana. Sugali speakers in Telangana also refer to the rainbow as Singidi. In a popular song, ‘Eruvaka sagaro ranno chinnana’, the rainbow is called Varada Goodu (solar halo), in the context that it rains follow the rainbow.

The amarkosh dictionary states that Indrachapam, Koradu, Korru, Devayudham (weapon of the gods), Vakram, sakradhanushu, seethamcheera (saree of Sita) are some other synonyms for rainbow in Telugu. Of course, the fact that these terms have been sidelined and Indra Dhanushu is used popularly is likely a reflection of the cultural hegemony of Sanskrit.

Most countries are home to many ethnicities and cultures. India is one such example, where hundreds of languages, many religions and cultures exist. Recognising this plurality, India’s constitution promised respect for all cultures and religions. However, the Sangh parivar believes that the country can only have one culture and has made efforts, big and small, to undermine the cultural pluralities of India. As we have seen, even something as trivial as a rainbow can become, in their hands, a vehicle to further their agenda.

Language is not only a tool to communicate but also an identity. Apart from preserving different languages, and resisting the pressure of religious politics and the hegemony of one culture over another, we would do well to let go of religious explanations for natural phenomenon.

Adopting terms that encourage children to know more about the science behind these phenomena will help shape their outlook and develop scientific temper, rather associating everything wondrous with religion.