Hindus and Muslims in Dhulagarh celebrated Rabindranath Tagore's birthday by tying rakhis on each other to symbolise fraternity. 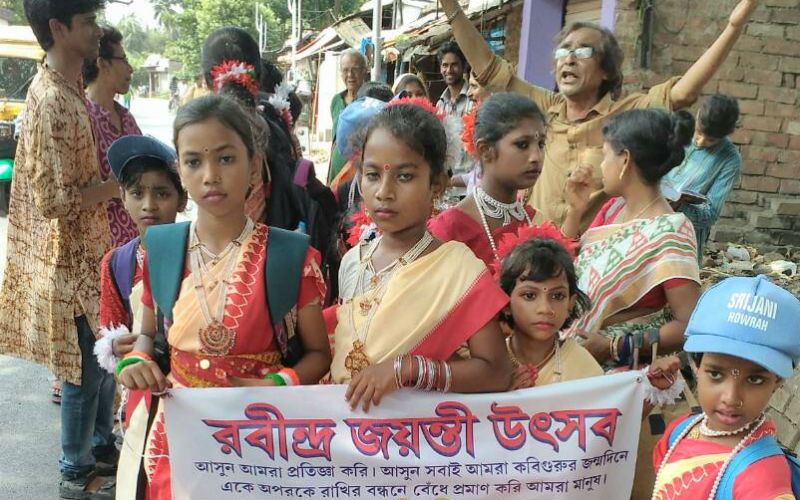 Children performing in the celebrations hold the banner for the event. Courtesy: M. Reyaz

New Delhi: In December 2016, Dhulagarh in West Bengal’s Howrah district had witnessed communal tensions. On December 12, Milad un Nabi, or Prophet Muhammad’s birthday, celebratory processions had made their way through Hindu neighborhoods, sparking tensions that escalated into a communal riot the next day. A curfew had been put in place for several weeks following the violence.

Today (May 9), the Hindus and Muslims of Dhulagarh came together to celebrate Rabindranath Tagore’s birthday by tying rakhis on each other. The Bangla Sanskriti Manch organised the Rabindra Jayanti Utsav to honour Tagore’s memory and spread his message of unity and harmony.

In July 1905, Viceroy Lord George Curzon had announced the partition of Bengal to separate the Muslim dominated east from the Hindu dominated west. Tagore had protested the partition – effected on October 16, incidentally coinciding with raksha bandhan – by encouraging Hindus and Muslims to tie rakhis on each other, symbolising fraternity.

The Bangla Sanskriti Manch’s event drew from this tradition instituted by Tagore, to protest against growing communal polarisation in West Bengal.

Several civil society activists from Kolkata joined the programme, suggesting that events such as these are the need of the hour. Miratun Nahar, a retired philosophy professor and a participant in the event, said that the villagers of Dhulagarh live in harmony, however, “political forces are trying to vitiate the atmosphere for narrow political gains.”

Nasir Haider Khan, who had visited Dhulagarh soon after the riots said, “It’s very positive to see that locals are taking initiatives to build bridges between two communities after riots.”