Alternative faecal sludge management systems that are effectively planned in a network to cover entire cities can make Swachh Bharat a reality. 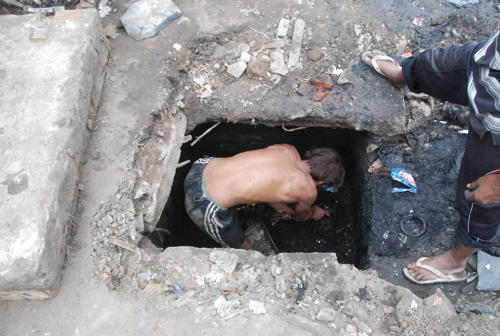 Over the last couple of months, the Ministry of Urban Development has started telling state governments and cities that improving faecal sludge management is an important alternative to traditional sewerage systems and waste water treatment for urban sanitation.

At a recent workshop, the ministry announced that it will encourage cities to adopt alternative approaches to citywide sanitation, including faecal sludge management strategies under the its flagship urban development schemes – the Atal Mission for Rejuvenation and Urban Transformation (AMRUT) and the SMART cities schemes. The ministry had earlier asked states to have their agencies for water and sewerage take responsibility for septage and sludge management. Currently neither are allocated as a responsibility to a specific authority in most states.

Ever since the ‘Great Stink‘, in London in 1856, underground sewerage has been seen as the only technological approach to provide safe sanitation services in dense habitats and urban areas. This understanding was the basis of colonial city planning in India and even today, new planned areas in cities adopt underground sewerage as an unique technical option for urban sanitation.

The ministry’s announcement is a significant departure from government policy in the past which has only supported the development of large, centralised technical systems through underground sewerage projects in urban areas – be it in multilaterally or bilaterally funded projects or by those funded under the erstwhile JNNURM.

Over the years, the demand for toilets have increased in urban areas, from 68% of the population in urban areas accessing toilets in 1991 to 88% in 2011. People have been building their own toilets connected to onsite-sanitation systems – especially septic tanks – in the absence of underground sewerage systems. Therefore, encouraging a faecal sludge management system is the way this policy leverages the investment already made by people – a genuine reflection of the prime minister’s 2014 independence day speech, where the Swachh Bharat Mission was conceived and presented not as a government scheme, but as a peoples movement. More than 38% of the Census 2011 urban households used toilets which relied on their own onsite systems, while 32% reported that their toilets were connected to sewerage systems. 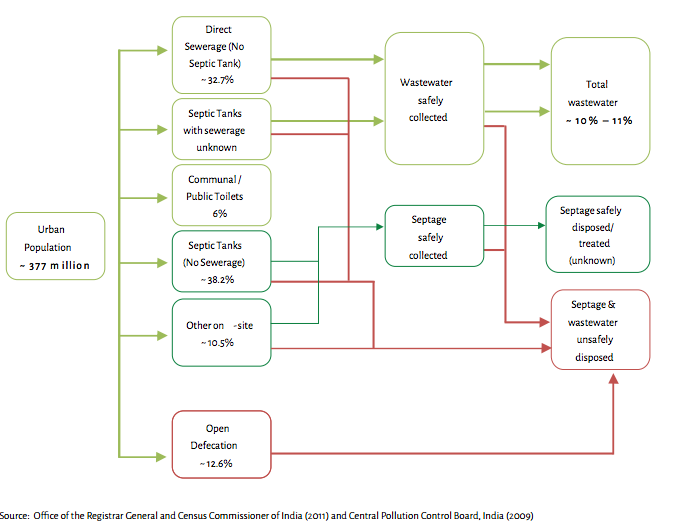 Also to be noted is that many of the households that have toilets connected to underground sewers are in larger metropolitan cities and especially, in better planned housing areas in these cities. Those without privilege are rarely connected at all and depend on their own onsite systems. As per a Central Pollution Control Board report published in 2015, only 263 out of the 4,041 statutory towns in 2011 had, or were building, sewerage treatment capacity – often lesser than that required to treat the waste water generated in the city – leading most cities to discharge untreated waste water into lakes and rivers and polluting the environment.

As per a Boston Consulting Group study, in 2010, 2.7 billion people worldwide relied on onsite sanitation systems and this is expected to grow to 4.9 billion by 2030. Onsite systems need to have the accumulated faecal sludge and septage removed at regular intervals for them to operate effectively as treatment systems that reduce pathogens and thereby reduces disease risk. 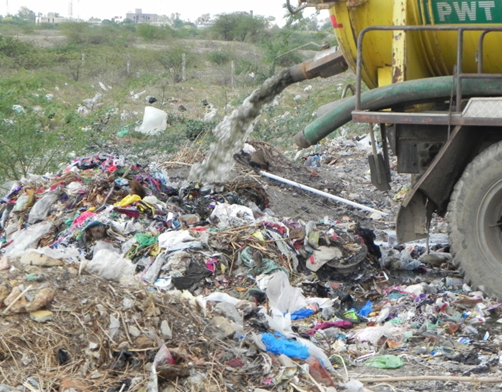 Open dumping of septage in India. Credit: Faecal Waste Management in Smaller Cities across South Asia: Getting Right the Policy and Practice

The evacuation and conveyance of septage has been neglected by the local and national government alike in their enthusiasm to develop underground sewerage networks. This has led to the proliferation of informal, inappropriate and unsafe methods being used in septic tank construction, evacuation and conveyance without environmental, health, safety or labour regulations. Sanitation workers often risk immense health hazards and manual scavengers are forced to clean dry toilets.

The most significant benefit that improved sanitation aims to achieve is public health, not only in the household but in the full geography of the city or town. The workshop and the pronouncements of the ministry are particularly significant in encouraging a new approach which has definitive advantages over the traditional underground sewerage. In terms of capital costs of construction, time requirements of construction, an improved system which has benefits of reducing the water and energy requirements for running the system – all hold the promise of a quicker uptake across the large non-networked areas in large cities and across smaller cities. Other than this it also suits a large number of our cities which have organically grown with narrow streets, where laying sewerage pipelines are technically challenging. 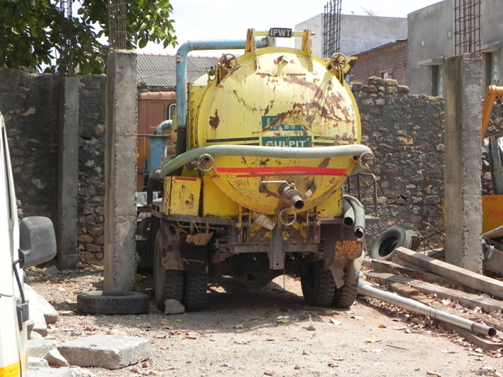 While the ministry’s efforts need acknowledgement, the first movers have been a few states – namely, Orissa, Tamil Nadu, Andhra Pradesh and Maharashtra – which have been seriously considering a faecal sludge and septage management (FSM) as a full-fledged alternative to underground sewerage. These states have argued that if sewerage was to be constructed and operated in all urban areas it could take a generation to improve services universally and this alternative approach needs to be implemented. Towards this end, a number states have been developing new state policies and strategies and have also been considering a new comprehensive regulatory framework on waste water management.

Waste management in other countries

India, is not the first country however to embrace FSM as a strategy. Countries in South East Asia such as Malaysia, Indonesia, Philippines and Thailand are the leaders and they have adopted this approach widely. In South Asia too in Sri Lanka and Bangladesh a number of Asian Development Bank funded faecal sludge treatment projects have come up in the last couple of years.

Modern systems will also need planning and regulation, as in the western countries and in a number of places in South East Asia and a few towns in Sri Lanka. In these systems, the septic tanks owned by households and the collection and transport system along with the final treatment and disposal, operate under a regulated regime, which takes into account the health and safety of sanitation workers and the environmental concerns. 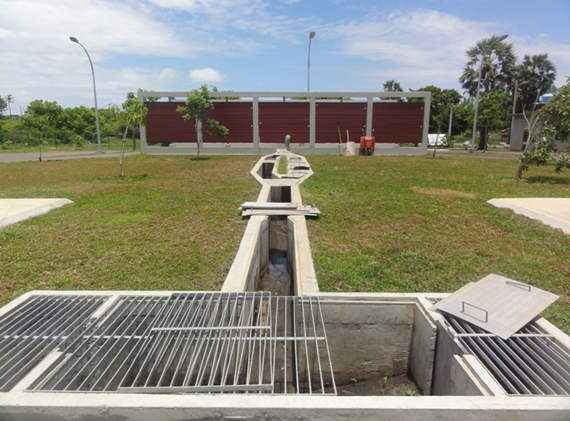 An example is Malacca in Malaysia, where transport routes are planned in detail with the treatment infrastructure and is operated by a national agency called INDAH Water Konsortium. An independent regulator called SPAN regulates worker safety and environmental discharge. In Sri Lanka, the National Sewerage and Drainage Board has built septage treatment plants to meet the national environmental standards which are now being operated by the local government which also regulates and licenses septage transport operators, overseen by the board, such as in Chilaw. 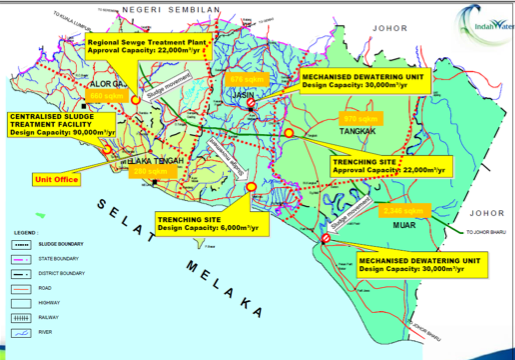 INDAH Water has been very successful in raising the quality of the service with constant research and development, leading to continuous improvement of the vacuum trucks involved in conveyance, as well as the safety equipment mandatory for workers. The safety equipment includes basic personal protective equipment such as uniforms, safety shoes, gloves, safety helmet and safety glasses, reflective vests, rain coats, wellington boots and antiseptic soap. In Malacca, older homes are incentivised to adopt the new licensed and standardised septic tanks that are safe and efficient, while new developments are permitted to use only these septic tanks. INDAH Water engages in detailed planning for collection and transportation – which includes categorisation of the source of sludge and the sludge accumulation time as per the Malaysian Sewerage Industry Guidelines – to arrive at vehicle numbers and sizing, tanker design, permitting regulations and health and safety requirements and developing the control and monitoring system. Based on this plan they run a scheduled de-sludging operation and have some extra capacity to respond to unscheduled demands from users. On the treatment end, they have a range of facilities with various technologies and there is continuous research and development to keep improving their efficiencies.

While this approach to environmental sanitation holds much promise for India and funding has become possible due to support from AMRUT and the smart cities schemes, much needs to be done. On the regulatory front, the government needs to clearly specify the role and responsibility of households and the municipality with regard to building, operating and clearing septic tanks. Similar responsibility must be allocated for the health and safety of workers and operators. The government also needs to develop guidelines for land and environmental clearances for treatment facilities and standards for discharge and reuse of the treated water and other products of the treatment plants. On the technology and vendor front, there are very few players in the country who have requisite knowledge and experience at present and so a much wider number of Indian firms need to be brought in to participate in this space.

In 2004 a similar workshop held in YASHADA, Pune, had crafted a ‘Pune Declaration’ on sanitation, which led to the ministry forming a task force and the drafting of the National Urban Sanitation Policy, which still guides the sector today. At this workshop earlier this year, the ministry joined to sign a ‘National Declaration on FSM’. Will this lead Indian cities to actually stop polluting the environment and contributing to it by 2019 – or soon thereafter? Maybe not – there is still a lot of work to be done in enabling cities and citizens to help themselves – to give them agency to make their decisions. But even if this begins to happen in the few states that have already begun work, it will still be progress for the country.

Shubhagato Dasgupta is a senior fellow at the Centre for Policy research, New Delhi