A statement by Tamil poet and novelist Perumal Murugan on ending his self-imposed literary exile. 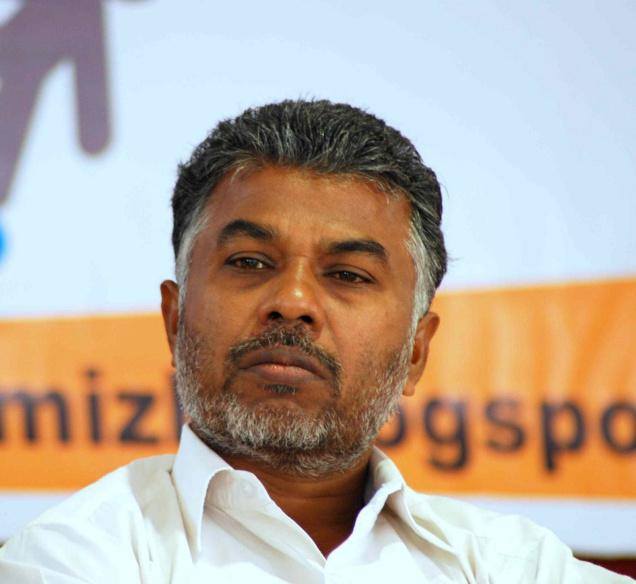 Tamil poet and novelist Perumal Murugan ended his self-imposed literary exile on Monday. For the past 19 months, Murugan had ceased to write after he was persecuted by caste-based groups following the publication of his novel Madhorubagan (One Part Woman). His exile ended with the publication of a collection of about 200 poems, Kozhaiyin Padalgal, launched at the Nehru Memorial Museum and Library.

Below is his statement announcing the end of his exile.

Growing out of the cocoon

I’d never have imagined that my book—and especially one written in my mother tongue—would be launched in the capital city of India. I have mixed feelings on this occasion. I cannot but be unhappy about the circumstances that occasioned this. However, I cannot turn my back in sadness.
During the nightmarish time when my life was driven into a crisis following the controversy over my novel, Madhorubhagan, writers—from Tamilnadu, from other parts of India and from across the world—stood by me, extending their support in various ways. Across the country voices were raised in support of freedom of expression and against intolerance. It is those voices which have brought me here today. I accepted this invitation to speak here only to express my gratitude to those voices.

I’ve always been averse to spectacle and sensation. A peasant cultural tradition that lives cloistered within its village is what shaped my disposition. I led a contented life in an out-of-the-way small town and was pursuing interests close to my heart. But circumstances have thrust me today to the capital city. This cannot be without cause for regret.

It’s difficult to say when I started writing. I was probably eight or nine then. A little ditty about my favourite cat, ‘Poonai nalla poonai’ is the first writing that I can recollect. Some years later it was broadcast in the children’s programme of All India Radio’s Tiruchirappalli station. Since then poetry has been my primary vehicle of expression. It’s later that my interests diversified into the short story, the novel, and other prose forms. Barely a year separated the writing of my first two novels. My third novel took seven years. Short and long intervals have punctuated my prose writings. During such intervals there’ve been times when I never wrote a line of prose. But there has not been a time when I didn’t write poetry. I’d keep scrawling something or the other. Later I would reject some of these lines as mere scribbling; sometimes I’d wonder at their beauty.

Four volumes of my poems have been published so far, and they probably contain some hundred and fifty poems. These were the ones that passed muster. But in this my fifth collection there are over two hundred poems. Looks like some kind of alchemy was at work within me. I write poems for myself. Writing poetry is a private act. This is why only a small part of my poems have seen print.

Even in the midst of writing prose some poetic line would lead me away. Between December 2014 and June 2016 I couldn’t so much as scratch a line in the first three months. As though the fingers of my heart had become numb. I couldn’t read a thing. Even when I turned the newspaper my eyes would scan the print but my mind would not absorb a word. I’d flip through the pages like an illiterate person and fold it away. I consoled myself that there were things to do in this world other than reading and writing. And I did my best to turn my attention to them. But it was impossible. It was then that I realized the full meaning of the Tamil phrase, ‘nadaipinam’, ‘a walking corpse’.

Towards the end of February 2015 I went to Madurai to see my daughter, and spent a few days in my friend’s house. On the first floor were two rooms. One was stacked with books and the other had a bed. With nothing to do I lay dazed night and day. I wallowed in a dark hole without the urge to see or talk to anybody. But as I ruminated over my existence, there came a certain instant when the sluice gates were breached. I began to write. I chronicled the moment when I felt like a rat, dazzled by the light, burrowing itself into its hole. I’ve always felt like a rat living in its hole. At that instant this image felt rather apt. There are a thousand alleyways in the burrow. And a thousand pockets too. The poems ended thus.

Thousands of alleyways.
Thousands of pockets.
Amongst the pockets
that no one can spot
where am I
now?

This beginning branched into innumerable ways. I wrote whenever anything struck me. As I started to write, I began to revive little by little, from my finger nails to my hair. It was poetry that saved me. Kozhaiyin Padalgal, ‘a coward’s poems’, is a book of such poems.

I have resumed my writing with poems. I’ve begun to relive again starting from my boyhood. Poetry continues to the form of my liking. I’m not sure if these are good times for poetry. But it’s poetry that has inaugurated my good times. Just as before, my writing could start from poetry and move into other forms. I believe that this is how it will happen. I am, however, unable to say when this will occur. It may happen step by step. Perhaps not at all. So what? Poetry will do for me.
I’d declared earlier that I believe in neither resurrection nor in reincarnation. I’m now confused: Should I start having such a belief? The Madras High Court has said that ‘Time is a great healer’, and that ‘Time also teaches us to forget and forgive. If we give time its space to work itself out, it would take us out to beautiful avenues’. The learned judges have also said that ‘Perumal Murugan should be able to write and advance the canvas of his writings’. The last word of the verdict—‘Write’—sounds to me both as a command and as a benediction.

The question of whether a word or a sentence in a judicial verdict should determine if I write or not remains in my mind. If a faceless force can put a full stop to writing, can’t a line in a judicial verdict bolster writing? Moreover, the imperative ‘write’ suits my present state of mind and is cause for happiness. I’ve therefore resolved that I should thank the court, resume writing and start publishing. The publication of this book marks this beginning.

I am also mulling over the reissue of my earlier writings. I will soon begin the weary task of reviewing my books. If required I shall revise the text. I’m not sure if this is right. However, when so many things that are not quite right are happening all over, why not this? What am I to do? A censor is seated inside me now. He is testing every word that is born within me. His constant caution that a word may be misunderstood so, or it may be interpreted thus, is a real bother. But I’m unable to shake him off. If this is wrong let the Indian intellectual world forgive me. The learned judges have said that ‘I should not live under fear.’ But my old teacher, the great Thiruvalluvar has said,
Folly meets fearful ills with fearless heart;
To fear where cause of fear exists is wisdom’s part.

Let me add something. Call it a request if you will. My mind has now attained a state of being able to write poetry. I need to maintain this state, and progress towards writing in other genres. Some years ago, on a happy evening, my two children asked me, ‘Appa, how many books will you be writing?’ ‘How can I say that with any certainty?’ I replied. But they pestered me. ‘Okay then, tell us the books you have in your mind!’ Until then I’d never contemplated such an exercise. I began listing out the books conceived in my heart. It came to about a fifty. Of these over ten were novels. I was overcome with excitement. Would I live that long, I wondered? I reassured myself that ‘My writing will do little to change this world. Let me write what I can.’

I’m not now sure that I will write every one of those fifty-odd books. Even if I do I doubt if they will take the same shape as conceived earlier. It’s however certain that my writing will not be the same. To spell out what would be the nature of that change will require quiet and reflection. I need time to gather my creative energies. I’m not a motor pump to draw water from the depths the moment it is switched on. I’m more a pupa in a cocoon. It will require time to develop colourful wings. Please allow me the time to do so.

Taking the podium or giving interviews has never enthused me. I’ve given the occasional short interview. It is silence that gives me strength now. I’ll write to gain further strength. My request therefore to the media and organizers of lit fests is this: ‘Please do not ask to me speak. Let me be quiet. And write. I shall speak to you through my written words.’

My heartfelt thanks to all those who arranged this event and the audience who took part.

(Perumal Murugan’s statement in New Delhi on August 22, 2016 on the occasion of the launch of his new book of poems, Kozhaiyin Padalgal. Translated from the Tamil by A.R. Venkatachalapathy.)