The Pioneering Queer Artists Who Opened Vietnam to Gay Culture

LGBT rights are a work in progress in Vietnam. But artists are in the vanguard of the movement, pushing for public acceptance. 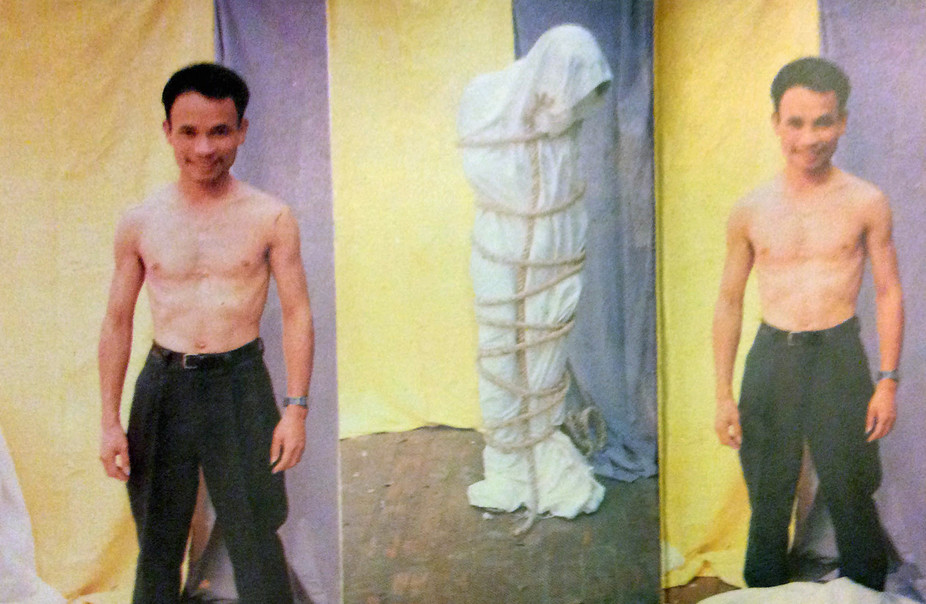 Truong Tan’s catalogue for his first solo exhibition in 1994 documents his tentative exploration of performance art and frequent use of ropes. Credit: Photo by Truong Tan used with permission., CC BY-NC 4.0

In an historical decision, Taiwan’s top court has ruled in favour of gay marriage. The May 26 verdict raised the hopes of many LGBT activists throughout the region, especially in China and Vietnam.

As is all too common worldwide, homophobia causes suffering in Vietnam, where until 2000 it was illegal for gay couples to live together. Homosexuality was only removed from the official list of mental illnesses in 2001, and it is still largely frowned upon.

Still, there have been advances. Since 2012, the country has celebrated gay pride (Viet Pride) annually, and, in 2016, it saw the launch of the first local gay social network, Blued, which sends about 2 million daily messages among users, according to the company.

But even if LGBT rights are still a work in progress in the country, Vietnamese contemporary art has been a pioneer in this realm for decades.

In the 1990s, the contemporary art scene was booming in Hanoi. New galleries opened, foreign art collectors took an interest in this relatively unknown country and, although censorship by a watchful regime did not disappear, Vietnamese artists gained some freedoms.

Significant innovations included the appearance of performance art and of homosexual content in the artwork of Truong Tan, possibly the first openly gay Vietnamese visual artist.

Art critic Bui Nhu Huong cites him as the pioneer of Vietnamese contemporary art, and many artists in recent years have expressed their admiration for his resistance to being constrained by social and official condemnation.

Truong Tan’s first work showing homosexual content dates from 1992, when the painting “Circus” was displayed in a group show at the Hanoi Fine Arts University, where Tan was a lecturer.

The decision to show this work activated something in him. “My goal was set,” he said, explaining that he was ready to stop hiding his homosexuality and that he was determined to forge a career as a professional artist.

It wasn’t easy, and for some time he kept his homoerotic drawings private. Circus, in fact, references restrictions in the bound-up ankles of one figure. Ropes are a recurrent image in Truong Tan’s artworks, symbolising his feelings about Vietnam’s conservative environment.

More directly, Circus shows a figure that appears to be powerful, controlling and abusive, and one that is twisted, inverted and powerless. It is striking that Tan’s first queer artwork represents brutal domination. In contrast, many of his later paintings show cavorting, loving and playful same-sex couples.

His first solo show opened in Hanoi in 1994, displaying an abundance of male nudes. In exhibiting these, Truong Tan tested the water for public acceptance of content that could be read as homosexual.

Later that same year, in Ho Chi Minh City, the artist exhibited imagery that included erect penises. As he later told Marianne Brown in a February 2012 article for the Tribune Business News, Tan believes that this decision drove the authorities to start monitoring his work closely because he didn’t heed the official guidance “not to show work that opposes the party and the government, or goes against traditional customs.”

The following year, Tan experienced a notorious case of censorship when 18 of his art works were removed from an exhibition in Hanoi’s Red River Gallery. News spread quickly. And by the end of 1995, the international media was already describing Tan as “Vietnam’s only openly gay painter”.

Although Tan has never abandoned painting, in the mid-1990s he began to embrace performance; like him, it was free from rules and canons.

Since performance art had no local history, there were no entrenched criteria on which to judge it. Performances were as of yet uncommon events, an alternative to the more formal gallery setting, where artists risked having permission to show their work denied by the Department of Information and Culture.

In 1996, Truong Tan collaborated with the artist Nguyen Van Cuong on a performance called Mother and Child (sometimes called The Past and the Future), which took place during the closing event of an exhibition in a Hanoi gallery.

In this ten-minute performance, Truong Tan curled up on the floor, smeared with what looked like blood, and rolled around tormented by Nguyen Van Cuong’s broom, which swept him around. It’s not hard to imagine the political and the queer connotations of such a scene.

Despite his successes as an artist, by 1997 the grind of low-level restrictions spurred Truong Tan to leave Vietnam and move to Paris. The freedom he felt there surpassed his expectations.

News of his work continued to reach Asia, playing a part in regional developments. Thai curator Apinan Poshyananda stated that by 2000, the contributions of Asian artists to critical debates on postmodernism, new media and issues relating to homosexuality had changed the panorama of Southeast Asia’s art. Truong Tan’s breakout work might not have changed laws directly, but they certainly played a part in encouraging other artists to attempt resistance and overcome self-censorship.

Today, queer cultural production is much more visible in Vietnam’s public sphere, and Vietnamese artists have continued to foster awareness of LGBT issues through their work.

The multidisciplinary artist Himiko Nguyen’s 2011 photography installation, Come Out, aimed to counteract what she sees as public ignorance on gender and sexuality issues.

Like Tan, Himiko laments the unwritten rules and constraints that she finds in Vietnamese society. Her comments indicate a thoughtful understanding on how ideology is implemented through national education and how it is naturalised by the general population.

In a country where naked people cannot be shown in the media, Himiko admits that she chose nudes to push up against these ingrained boundaries.

In 2012, the sitcom My Best Gay Friends launched on YouTube and became an instant hit. Its debut coincided with the first Viet Pride.

The next year, Nguyen Quoc Thanh, a founding member of the Hanoi art space Nha San Collective initiated Queer Forever, an art festival in Hanoi that encompasses art exhibitions, conferences and concerts. And an art zine called Vanguard is produced by the Vietnamese LGBTQ community.

These contributions would have not been possible without the pioneering work of Truong Tan. By raising hope through art, he has fostered social acceptance for Vietnam’s LGBT community.