People to People Ties Face the Brunt of Indo-Pak Tensions

Although a ban has been imposed on Pakistani actors in Bollywood and on Indian channels in Pakistan, it is not all bad news. 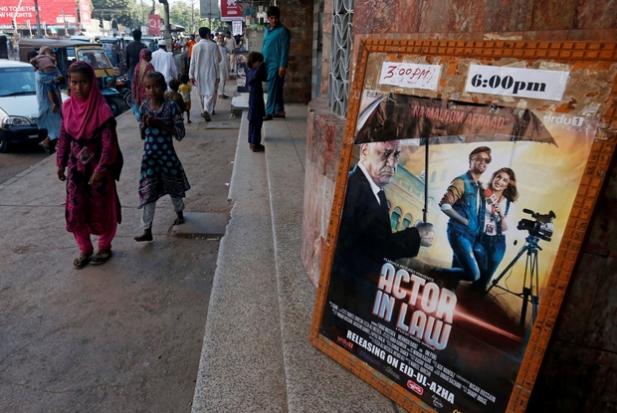 An advertising poster for a Pakistani film with Indian actors is seen outside a movie theatre in Karachi. Credit: Reuters

New Delhi: Tensions between India and Pakistan have been simmering in recent weeks and the September 18 militant attack on an army base in Kashmir’s Uri, in which 19 soldiers were killed, has become the tipping point. In the aftermath of the attack, a battle began to rage away from the border – between the film industries of both countries – with art and culture in both countries taking the hit.

As India announced that it had carried out surgical strikes on terrorist launchpads across the border, the Indian Motion Picture Producers Association (IMPPA) launched an attack of its own by banning Pakistani actors, singers and technicians from working on Indian films.

The organisation’s president, T.P. Aggarwal said, “No Pakistani will be hired by their producer members for ever.” He went a step ahead and asked the Indian government to boot the Pakistani artists from the country.

Even though Aggarwal has announced an indefinite embargo, reports claim the ban is expected to last until normal relations resume between the two countries.

The Maharashtra Navnirman Sena hopped on the bandwagon by leading a call for all film industry workers of Pakistani origin to leave India, as well as for their films to be banned.

Lahore-based actor Fawad Khan was one of the artists to get caught in this crossfire. Khan, who had planned to return to India to promote his upcoming film Ae Dil Hai Mushkil, decided to stay put in Pakistan as the ultra-nationalist party, led by Raj Thackeray, issued an ultimatum to Pakistani film artists to leave India or risk being “pushed out”.

Apart from Fawad, several other Pakistani artists – including singers Rahat Fateh Ali Khan and Atif Aslam, and actor Ali Zafar – are involved in Indian projects and would be affected by the ban.

However, many figures from the film industry have voiced their support for Pakistani artists.

Karan Johar, the director of Fawad’s upcoming film, has said his “heart bleeds for the lost lives” among India’s soldiers, but insisted banning Pakistani artists “is not a solution.” Salman Khan responded to the call for a complete ban by insisting artists from Pakistan should not be treated like terrorists, and that art and terrorism should not be mixed.

Vidya Shah, an Indian singer and musician, told DW that “Culture in whatever form brings people closer. Banning artists is just tokenism that serves no purpose.”

In response to calls for Pakistani artists to leave India, a group of Pakistani film exhibitors and distributors recently issued a statement denouncing the ban, “It is deeply regrettable that a film trade body, the IMPPA, has passed a resolution to ban Pakistani stars and technicians from working in India.”

Even though many in Pakistan have termed India’s ban as “regrettable,” film associations have responded by removing giant posters advertising Indian films in Karachi and have slapped an embargo on all Indian films, Al Jazeera reports.

Atrium Cinemas, Centaurus and Super Cinemas are among the group of Pakistani theatres that are boycotting Indian films until the current bilateral tensions ease. Indian movies were banned in Pakistan for 33 years after the 1965 war and only permitted again in 2008.

Pakistan’s movie industry lobbyists recently refused to release MS Dhoni: The Untold Story. The ban, however, did not stop at the biopic. According to Firstpost, the Pakistan Electronic Media Regulatory Authority announced a ban on all Indian channels in that country from October 1. Indian sitcoms and soap operas – already restricted on Pakistani television to 86 minutes a day – have also been completely banned by the country’s media regulator, Guardian reports.

In an interview with The Wire, Jatin Desai, the general secretary of Pakistan-India Peoples’ Forum for Peace and Democracy, said that after the IMPPA ban, “naturally there was going to be a reaction from the Pakistan side as well.”

The artists that make their way from Pakistan to India, he said, are “messengers of peace,” and by performing dance and music, which the militants oppose, the artists are “defying the militants,” and should be encouraged.

Ties between India and Pakistan have been tested several times in the past. In August, Karnataka-based actor-politician Ramya was accused of sedition for making positive comments about Pakistan.

Her crime was that on returning from Islamabad, where she visited as part of a delegation of young lawmakers from SAARC countries, she said, “Pakistan is not hell. People there are just like us. They treated us very well.”

Her statement came in response to defence minister Manohar Parrikar comments that “Going to Pakistan is like going to hell”.

“I will not apologise as I have not done nothing wrong. I am entitled to my views and that is what democracy is about,” Ramya told NDTV.

In February, actor Anupam Kher had said, “We welcome Pakistan’s artistes in India. Even if there are objections to their performance at one place in India, they are welcome at other places. But it is not reciprocated [by Pakistan],” The Hindu reported.

Kher’s comment came after he announced that he had been denied a visa to attend the Karachi Literature Festival and thus had to cancel his participation. The Pakistan High Commission, however, said the Indian actor had never applied for a visa.

The frayed bilateral relationship has often cast a shadow on cultural exchanges between the countries, but there are some exceptions, like Pakistani singer Adnan Sami. The Lahore-native, who has spent over a decade in Mumbai, was granted Indian citizenship in January. This after the 43-year-old singer’s earlier request for Indian citizenship was rejected in March 2015, Dawn reported.

Sports faces the brunt too

Apart from art and culture, another recent causality to the tense ties is sports.

Dawn reported last week that Pakistan was barred from playing in the Kabaddi World Cup that kicks off in India on November 3. The International Kabaddi Federation (IKF) chief Deoraj Chaturvedi said the team had been denied entry because of a spike in tension between the two nations.

“This is not the right time to engage with Pakistan,” Chaturvedi told Dawn. “Pakistan is a valuable member of the IKF, but looking at the current scenario and in the best interest of both the nations, we decided that Pakistan must be refrained from the championship.” In Ajmer, Mayo College called off a cricket match with Lahore’s Aitchison College after threats from Hindu chauvinist groups in Rajasthan.

Not all bad news

Despite the tension, travel between the countries has largely remained normal. Jitender Singh, who works with the reservation department of the Delhi-Lahore bus service, said that the bus from Delhi to Lahore was running at regular frequency and there hadn’t seen a significant change in the number of passengers traveling across the border.

But for those arriving in India, there has been some cause for fear. Soon after the Uri attack and India’s surgical strikes in Pakistan-occupied Kashmir, a delegation of 20 students from Pakistan arrived in Chandigarh on September 27 for the 11th Global Youth Peace Festival.

Group members came bearing hand-written notes and friendship cards from various schools in Pakistan, but were also fearful about their safety.

According to Indian Express, Aliya Harir, the leader of the contingent and convenor of Indo-Pak friendship initiative Aaghaz-E-Dosti, reached out to external affairs minister Sushma Swaraj to help the girls return to Pakistan.

In a swift response, Swaraj said that differences between the two countries would not become a hindrance to their safety and assured the visiting students a safe return home.

Aliya – I was concerned about your well being kyonki betiyan to sabki sanjhi hoti hain. https://t.co/9QyeMQfRwy

Swaraj spoke to Harir and asked her if they needed any help and also told the group that if at any stage they faced any problem, they must immediately let her know.

Desai insisted that the Pakistan-India Peoples’ Forum for Peace and Democracy denounces “this business of banning of actors, films and channels,” adding that there should be an end to the mixing of art and politics.

“This is the time that the common people of both countries should rise above this narrow nationalism.”