The Humanist Who Was Pakistan's Malayali Comrade B.M. Kutty

He died wanting the same peace that his comrades, young and old, yearned for and will keep working towards.

Despite his ideological moorings, Kutty sahib was not dogmatic. His impish, romantic streak would surface with a little encouragement. Photo: hasilbizenjo/Twitter

Early on Sunday morning in Karachi, a little over a month after his 89th birthday on July 18, 2019, B.M. Kutty slipped into the ever after. A lifelong activist, trade unionist, political worker, peacemonger, humanist. I like to remember him as I last saw him in Karachi – his big smile, deep voice with its powerful timbre, intense gaze behind the glasses, dapper as usual in bush-shirt and trousers.

I first met Kutty sahib – Biyyathil Mohyuddin Kutty, to give him his full name – through the peace and democracy movements in Pakistan sometime in the early 1990s, when I was starting out as a journalist. Born and brought up in Kerala, he stood out in Pakistan, with his distinctly South Indian accent and looks.

Along the line, I learnt that he was a ‘comrade’ – a member of the banned Communist Party of Pakistan, and a friend of my father Dr Sarwar, a party sympathiser who led Pakistan’s first student movement in the 1950s. Kutty sahib was a ‘card-carrying member’.

Until Pakistan banned the CPP in 1954, its red flag fluttered out of a window at the party office in the heart of Karachi. Another comrade, economist Eric Rahim, remembers the building being manned in the initial years by “a Malabari comrade, a beedi (cigarette) worker who acted as a kind of caretaker” – probably among the many Malabaris or Malayalis who fled the southwestern Malabar coast after the 1921 Moplah Rebellion to escape the British-administered crackdown. Some settled in Singapore, others in Karachi.

By 1947, Karachi’s Malabaris were quite established, working at or running pan shops, beedi-making units and restaurants. So much so that there was a two-story building called Calicut Hotel, that belonged to a Malabari from Calicut, remembered Kutty sahib.

His Malayali background enabled him to work easily with the beedi workers, organising their trade union and pushing for their rights. He saw no contradiction between his multiple identities. “I am a Malayali at heart, but also a Pakistani. And yes, if being a communist means giving voice to those who have nothing and raising issues on their behalf, I am a communist too,” he said in an interview to Adhiti Phadnis.

He owes his almost miraculous recovery from a paralytic stroke in the summer of 2015 to his roots in Kerala. His speech affected, forced into bed rest for five months, Kutty Saab’s family and friends helped him return to Kerala, for Ayurvedic treatment. The treatment lasted for over two months. He got back his speech.

“I feel lucky that Ayurveda of my land of birth has helped me recover,” he said. This experience highlighted for him, even more, the need for good neighbourly relations between India and Pakistan.

He shared a vision for regional peace with other visionaries like the Gandhian social activist Nirmala Deshpande, Asma Jahangir, Nikhil Chakravartty, Rajni Kothari, I.A. Rehman, Dr. Mubashir Hasan, Dr Eqbal Ahmad and many others who since the late 1980s and early 1990s have been laying the seeds for a peace constituency.

It is important to remind ourselves that far from shrinking, this constituency has consistently grown, recruiting more young people across the region who are doing amazing work in their fields. However, the public discourse – shaped by the media echoing bellicose state narratives amplified by troll armies in the virtual world – does not reflect this reality.

When Nirmala ‘Didi’ as she was widely known, passed away in 2008, Kutty sahib along with his long-time friend and colleague Karamat Ali and political activist Sherry Rehman attended the funeral in Delhi. In accordance with Didi’s wishes, they brought back her ashes to submerge them in the Indus. In 2010 the government posthumously awarded one of Pakistan’s highest civilian awards, the Sitara-e-Imtiaz, to Nirmala Didi.

Kutty sahib showed his admiration for Didi, as well as other women achievers, by dedicating his book to four women — Biriya Umma (mother), Nirmala Deshpande (peace), Benazir Bhutto (democracy) and wife Birjis (love), as I. A. Rehman notes in his insightful review of the book.

Kutty sahib considered himself a “voluntary fugitive”. He had crossed the Khokrapar-Monabao border on August 14, 1949, at age 19, not as a refugee – no one had forced him to move for political or economic reasons. This vision is reflected in the title of his memoir, Sixty Years in Self-Exile: No Regrets, published in 2011. It was a name suggested in 2007 by Nirmala Didi when they met in Delhi.

“I went on my own. I exiled myself. It doesn’t have any special meaning… But I don’t have any regrets, which means that this exile is very different from exile as such”, Kutty sahib told Livemint. “I enjoyed life, lived my life fully as a political activist and a peace activist”.

In India for the book launch at the invitation of the Policy and Planning Group, Kutty sahib tried to push the peace agenda. In July 2011, he called on BJP state president G. Kishan Reddy and other leaders at the BJP office in Hyderabad “as part of his tour (in India) to promote peace between the two nations… He had secured five lakh signatures for peace in India and Pakistan and submitted them to both governments”.

Despite his ideological moorings, Kutty sahib was not dogmatic. His impish, romantic streak would surface with a little encouragement. It was his love for geography that led him to leave his home in Kerala at the south-east of India for Pakistan. After a few months in Karachi, he went to Lahore, curious to see this legendary city, home of Mughal tombs including the queen Noor Jehan and the dancing girl Anarkali.

Plus, he said, he heard the girls in Lahore were beautiful.

“I found this very funny, that even in the midst of all this upheaval and the very serious activism of communist organising, young men’s thoughts were not averse to mixing pleasure with business,” tweeted journalist Hasan Zaidi. 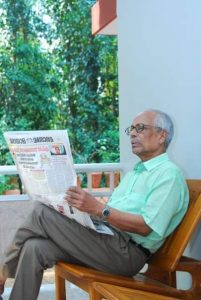 B.M. Kutty’s move to Lahore was not meant to be permanent, but then he fell in love with the city. Photo: Twitter/hasilbizenjo

“Of course, when I related this story to Arif Hasan (well-known architect and researcher), he enjoyed it but also rubbished it. The railways yard was in Lahore, he told me, and that’s where Kutty sahib was probably sent by the (Communist) party. If that were true, that also amused me, that Kutty sahib was having me on. I suspect it may have been a bit of both. He was a lovely, loving man”.

The truth is that like many others, he never expected this to be a permanent move. But then he fell in love with Lahore. “It was so very beautiful – like Kerala, with its gardens, and trees… and the people were so nice. I got married there, to a very pretty girl”. She was Birgis Siddiqui, whose family was from UP, India. This move pretty much settled his life. The couple had four children and were married for 60 years, until her death in 2010.

In Lahore, Kutty sahib worked with various corporations. He also became associated with the Communist Party there, as well as “the Leftist political workers and the political leaders of Lahore”. One of them was the legendary Baloch political leader Ghaus Baksh Bizenjo. Kutty Saab became his political secretary, a role that continued when Bizenjo was appointed as the governor Balochistan.

In February 1973, a cache of arms and ammunition were recovered from the Iraqi Embassy, Kutty sahib came under suspicion for his unusual background – a Muslim Communist from Kerala working for a Baloch. They were suspected of arming Baloch rebels across the Pakistan-Iran border. Bhutto dismissed Bizenjo’s government, and Kutty sahib was arrested from the Islamabad airport. He and Bizenjo were both imprisoned.

But while Kutty sahib firmly supported the rights of the Baloch people, he was very clear that “Baluchistan’s future is in Pakistan, not out of Pakistan”. Not because of lack of resources which it has in plenty – gold, copper, gas – and a population that is not even 10% of Pakistan’s population.

I once asked Kutty sahib about the CPP leader Hasan Nasir from Hyderabad, Deccan, who had been imprisoned, tortured and killed during Ayub Khan’s martial law. My father and Kutty sahib were among those who knew Hasan Nasir personally and at whose doorsteps he would turn up, often in the middle of the night, during his underground days.

Kutty sahib remembered Hasan Nasir as a tall, curly-haired, “very handsome man… the eternal optimist”. Arrested in 1952, Nasir had been released and sent back to India along with Communist Party leader Sajjad Zaheer. But in 1958, Nasir sneaked back into Pakistan.

Also read: A Battle for the Soul of Pakistan

Pakistan was then under its first military dictatorship, and Field Marshal Ayub Khan ruled the roost. In 1960, the military authorities picked up Hasan Nasir. He is believed to have been brutally tortured, so much so that the authorities never returned his body This time the release would be death.

“We were in prison, sitting in the corridor outside our cells for breakfast when the news came that Hasan Nasir had committed suicide in prison. None of us could believe it. He was not the kind of man who could even contemplate suicide. We couldn’t do anything but sit there and weep,” Kutty sahib told me.

From the mid-1990s until a few years ago when his health forced him to cut back, Kutty sahib was active with the Pakistan-India People’s Forum for Peace and Democracy. He also co-founded and led the Pakistan Peace Coalition and was a staunch member of the Society for Secular Pakistan launched in 2014, some months before his first stroke.

He went back to Kerala for another round of treatment a couple of years ago, and again returned to Pakistan greatly improved. His relatives wanted Kutty sahib to stay on for medical treatment, but he never liked being away from Pakistan – his other home – for long.

His younger brother Mohammed, born after Kutty sahib moved to Pakistan, recalled Kutty saying, “I will die as a Pakistani who always wanted a great relationship with India”.

“What is happening in Pakistan is not limited to that country. Many other South Asian countries face religious fanaticism and terrorism. Blaming each other is really no solution. Since the problems are common, we need to take a collective view to solve them. We need to look and work in a regional framework rather than being solely governed by national interests”. His words from 2011 ring true especially today.

B.M. Kutty died wanting the peace that his comrades, young and old, yearn for and will keep working for. Over the past few years, every Eid, Christmas and New Year, I was among those who got an email from him expressing this wish. Kutty sahib is no more but the aspirations remain. And the struggle continues.