Our Folk Tradition Has a Lesson For Those Communalising Classical Music

Generations of Indian singers – from folk to Hindustani classical and beyond – have transcended religious barriers through their music.

Recently, I chanced upon a television debate titled ‘Is Carnatic music getting communalised?’ As is normal nowadays, when topics are sensitive, the debate rages and goes into high decibels with everyone screaming over each other, the anchor feebly attempts to control the talking heads but is soon drowned in the cacophony. On the show, I recognised well-known and reputed Carnatic classical singer and Magsaysay Award winner T.M. Krishna, who has been at the forefront of taking classical music to tribal and transgender communities and other marginalised sections of society. He holds concerts in their hamlets, involving the youth, and performs along with them in their communities, mingling in their midst and recognising their music as not being inferior to classical forms of music but just different and often more vibrant and soulful. He has been on a musical journey breaking social and caste barriers, often courting controversy along the way.

Through the heated debate, I could get the drift and gist of the charges being traded. Krishna was under siege from Hindu religious right-wing groups for defending a few of his musician colleagues for singing Carnatic music at Christian institutions. According to them, it was disrespectful to Hinduism; it was blasphemy. Krishna, called by many as the enfant terrible of Carnatic classical music and who revels in that role, declared that music is universal and that it was being communalised by people who were bigoted, narrow-minded and ignorant. He quoted Muslim Sufi saint singers who composed songs on Krishna and Rama and cited the most revered Carnatic classical music composer Muthuswamy Dikshitar (referred to as one of the musical Trinities, the other two being Tyagaraja and Shyama Shastri) who wrote Sanskrit lyrics to Western tunes, revealing his sparkling creativity and inclusiveness of the Indian spirit. 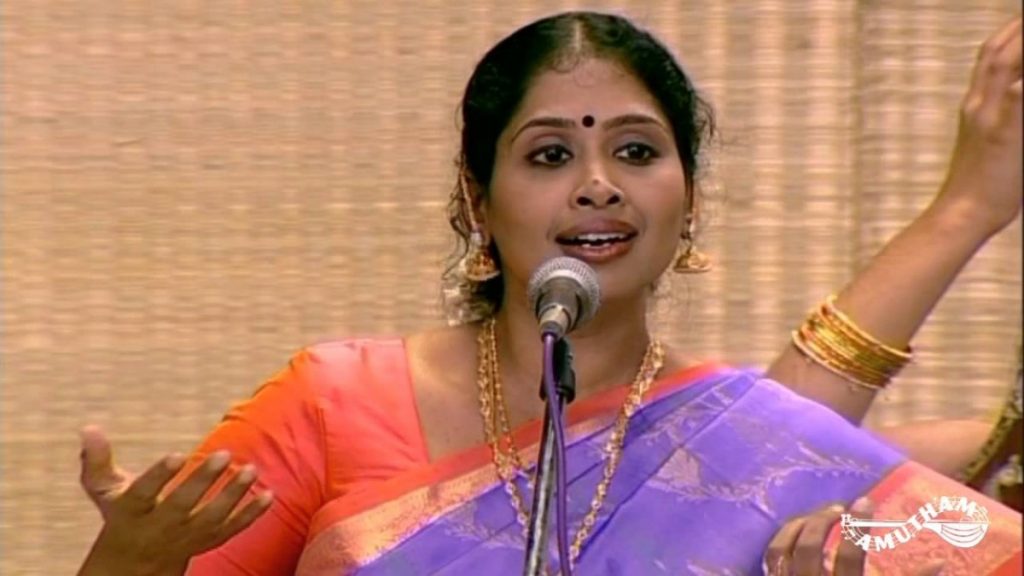 Carnatic singer Nithyashree Madhevan is among those being vilified for ‘tampering’ with lyrics. Credit: Youtube

Soon after the debate, I received multiple messages being circulated expressing outrage at these artists ‘selling their souls’ to Christian missionaries. Appeals and petitions were circulated across social media attacking some very well-known and popular Carnatic classical singers like Nityashree, O.S. Arun and Unnikrishnan, accusing them of substituting, for example, the saint composer Tyagaraja’s name in the krithi or lyric with Prabho or Yesu (Jesus) in his compositions. There were appeals exhorting people – ‘Let us join hands in saving our religion’. There were others who made charges that appeared a bit bizarre, calling this a vandalisation of music and urging people not to allow Christianisation and cultural appropriation of Carnatic music on the suspicion that the Churches and missionaries will use this to convert Hindus to Christianity.

It was reported that apart from verbal abuses, physical threats began to be issued to the artists on social media. That is when Krishna stood up for his colleagues though they themselves retreated and were not fighting back. Many singers issued apologies and cancelled their engagements, unwilling to get into controversies with aggressive self-styled groups representing Hindu outfits.

O.S. Arun is a prominent Carnatic classical artist who is known more for singing devotional Carnatic songs of saints from the South and who has also popularised Marathi abhangs and bhajans of Meera and Kabir among the southern audience. Over the telephone, the RSSS founder asked him: “Why are you singing for Christians, being a Hindu?” Arun responded that Hindu dharma teaches its worshippers to respect all religions. He added that one of his shows was cancelled because of certain threats, which he did not want to disclose further.

A Twitter war broke out and continues between Krishna, who took up the cause of his fellow musicians, and the right-wing groups and their supporters. There are also a large number of supporters praising and admiring Krishna for his stand, which is evident in the comments he received on his Twitter post:

Considering the vile comments and threats issued by many on social media regarding Karnatik compositions on Jesus, I announce here that I will be releasing one karnatik song every month on Jesus or Allah.
T.M. Krishna #art #religion #jesus #allah #communalism #freedom #music

You don’t seem to understand. The problem is not carnatic songs on Jesus, Allah, in fact there should be thousands of them. The issue is tampering with Thyagaraja’s compositions.

Thanks for saying this, @tmkrishna
“We cannot succumb to these bullies & become even more conservative.I support any musician who wants to sing Christian, Islamic, Buddhist, Jaina & of course atheistic and nonreligious compositions.That’s the direction this art form should take” https://t.co/bxH2cS4YHS

Many of the legendary Hindustani singers and instrumentalists – Ustads Bade Ghulam Ali Khan, Abdul Karim Khan, Begum Akhtar, Dagar brothers, Vilayat Khan and Bismillah Khan to name a few – practiced Islam. But they sang and played instruments which were in praise of Hindu deities. Ustad Bade Ghulam Ali Khan’s bhajan ‘Hari Om tatsat’ is something that could figuratively transport someone to heaven. So with Nadaswaram Samrat Sheikh Chinna Maulana Sahib. Temple musicians such as Ustad Bismillah Khan and Jesudas who sang in all major temple festivals mesmerising their audience. Who has not been moved by Pandit Jasraj singing a bhajan on Allah, ‘Mero Allah meherbaan’ or ‘Om Allah Om’ where he fuses Om and Allah and dissolves both into that supreme reality? I heard him sing this in Bangalore at the Ramanavami festival at the Fort High School a few years ago. He held the audience in thrall just as he holds one in an equal spell while singing ‘Om name bhagwate’. These artists have transcended all religious barriers through their music. Music, like sports, is a great unifier.

And who can ever forget Gandhi’s immortal bhajan ‘Raghupati Raghava raja Ram, iswara Allah tero naam’? It was sung and popularised by Pandit Vishnu Digambar Paluskar, a Hindustani singer and pioneer who shaped Hindustani music, taking it to the masses.

And Sufism in India and the Sufi music with its mysticism inspired by its poets and saints converged with the Bhakti movement and its devotional music. Both were neutral to conventional religion without its strict tenets and codes. They were mystical in nature but intrinsically reformist and preached simplicity, love, harmony, peace, devotion to god expressed through longing for oneness with the divine, in the broadest sense of those words. It is widely held that they not only influenced each other but Sikhism and Jainism and also Buddhism. All classical singers of yesterday and today from both schools sing songs of both the Sufi and the Bhakti poet-saints. Kabir is a prime example of the quintessential saint transcending narrow religious divides and is equally revered by Muslims, Hindus and Sikhs and appropriated by all three with pride. Who has not sung Kabir’s bhajans? 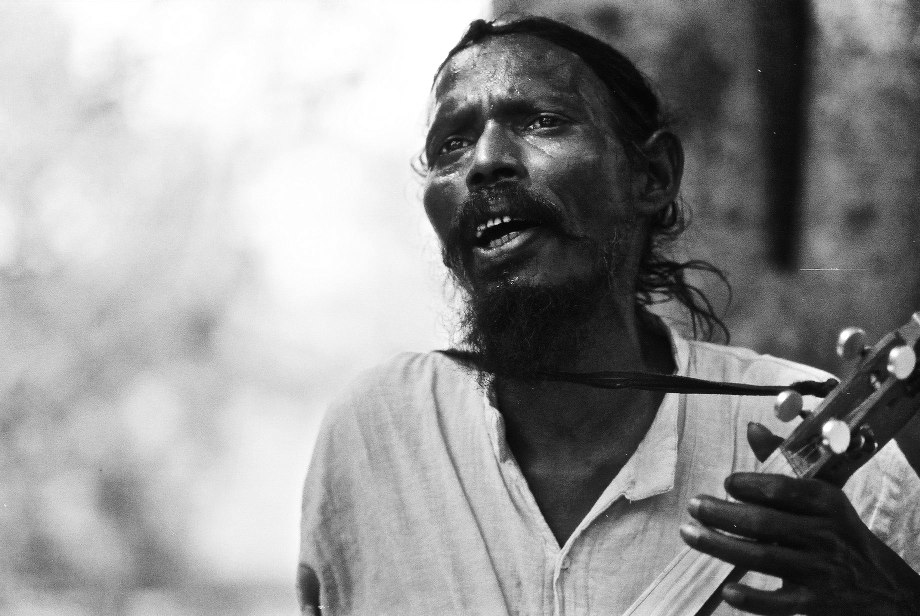 Rabindranath Tagore was greatly influenced and inspired by the Bauls and also translated some of their songs. A group of wandering mystic minstrels are a sect who mainly compose from Vaishnava Hindus and Sufi Muslims, Bauls hail from both Bangladesh and West Bengal. Many of our medieval devotional poems including folk songs from every part of India are steeped in messages of non-sectarian devotion through love of the divine and worship of nature. They all have one common thread of belief: search for god not through temples or mosques or churches, as god is within yourself. You yourself have to seek him individually. Here is a Baul song, in Tagore’s translation, which best expresses it:

The man of my heart dwells inside me.  Everywhere I behold, it’s Him!  In my every sight, in the sparkle of light

Oh I can never lose Him —

Here, there and everywhere,

Wherever I turn, right in front is He!

We all need a good dose of Baul folk poetry and its wisdom to save ourselves from being ‘broken up into fragments by narrow domestic walls’.