Zaheer was best known for his satirical work and wrote regular columns for various publications. He was furiously popular among readers and has made a lasting impression on Urdu literature. New Delhi: Renowned Urdu writer and translator Nusrat Zaheer passed away in Saharanpur in Uttar Pradesh on Wednesday evening at the age of 69. Zaheer had been ill for the last few months. He is survived by his wife and four daughters.

Best known for his satirical writings, he wrote regular columns for various publications. Until recently, he used to write a regular weekly column titled, ‘Nami Danam’ (‘I don’t know’) for the Urdu daily Inquilab.

According to Yameen Ansari, resident editor of Inquilab (Delhi edition), his column was published across all north Indian editions of the newspaper and was very popular with the readers. “We regularly received letters and emails from readers in appreciation of his columns,” Ansari told The Wire, and added that the columnist had to stop the column due to his flailing health.

Author and translator of several books, Zaheer had been writing columns for decades for different publications. When news of his demise emerged on Wednesday, many Urdu lovers recalled his satirical columns which had appeared in the now-defunct Urdu daily, Qaumi Awaz, a newspaper founded by Jawaharlal Nehru in 1937, which ceased publication in 2008. As a journalist, Zaheer worked with Qaumi Awaz, Sahara Urdu, Doordarshan and All India Radio in different capacities.

I loved his writings. His column in Qaumi Aawaz’ Sunday edition was widely read.

Speaking to The Wire, senior journalist Iftikhar Gilani said, “I had been an ardent fan of Nusrat Zaheer’s satire filled columns that were published every day in Quami Awaz in the early 90s. It is not easy to write satire and to find puns in every topic around you every 24 hours.”

According to Gilani, Zaheer was a genius who didn’t get his due, like most writers of Urdu.

The late writer also helped Gilani in translating and editing his jail memoir My Days in Prison in Urdu from English. In Urdu, it was titled Tihar Mein Mere Shab o Roz and both the original as well as the translation were published by Penguin India. The translation won the Sahitya Akademi award and Gilani remembers travelling to Bangalore with Nusrat Zaheer to receive the Award.

Sad to know demise of Nusrat Zaheer.Ll miss his wit n humer. It z not easy to write satire every day. Bt this legand did this in Quami Awaz. I spent many days with him while editing of Urdu version of my book. V traveled Bangalore together to receive Sahitya Akademi Award. https://t.co/fhUCJ2vyOq

“I wrote the first draft in Urdu, but it needed a lot of editing as I was not well versed with writing in Urdu. The publisher chose Nusrat Bhai for editing the draft. We sat down and spent many evenings to make the Urdu draft lucid and perfect,” recalled Gilani and added that “he remained a friend and a guide. I will miss his wit and humour.”

Some of his books include Tehtul Lafz, Ba-Qalam-e Khud and Kharraton Ka Mushaira. He also wrote satirical pieces for the children’s magazine Payam e Taleem, published by Maktaba Jamia, the publication division of Jamia Millia Islamia and one of the best Urdu publishing houses of India. He was also the founding editor of children’s magazine Bachon Ki Duniya, published by the National Council for Promotion of Urdu Language (NCPUL), an autonomous body of the government of India and was associated with its research journal, Fikr-o-Tahqeeq as its editor for a brief period. 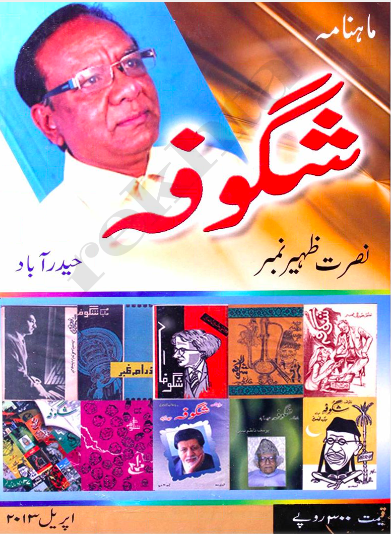 Cover of a special issue of ‘Shagoofa’ on Nusrat Zaheer. Photo: rekhta.org

In 2013, Shagoofa, a monthly magazine of Urdu satire and humour writings, published from Hyderabad brought out a special issue in his honour. His book Kharraton Ka Mushaira, a collection of articles written for Payam e Taleem won an award from the Delhi Urdu Academy.

However, many believe that Zaheer will also be remembered for Adab Saaz, a quarterly literary journal founded and edited by him. According to Ather Farouqui, general secretary of Anjuman Taraqqi Urdu (Hind), it was one of the best literary journals for quite a few years. Nusrat Zaheer was associated with the Communist Party of India (CPI) in his early years. However, “he had to go to jail during the emergency as he refused to toe the party line of supporting the emergency,” Farouqui told The Wire. “He was a low profile person and committed to the values he cherished, which included his opposition to all kinds of communalism,” added Farouqui.

According to Farouqui, before falling ill, Nusrat saheb was involved in the wonderful work of translating the history of English to draw parallels between the politics of Canon and the historiography of Urdu and English. This was apart from his regular writings for several publications. “Unfortunately, he took up the job quite late in his life, without knowing that he was about to complete his journey,” Farouqui told The Wire with a great sense of loss.

In the latest issue of Urdu Adab, a journal published by Anjuman Taraqqi Urdu (Hind), Zaheer’s translation of Andrew Sanders’s Poets’ Corners: The Development of a Canon of English Literature has been published. It is the introduction of Sanders’s book, The Short Oxford History of English and the Urdu translation of it can be read here.