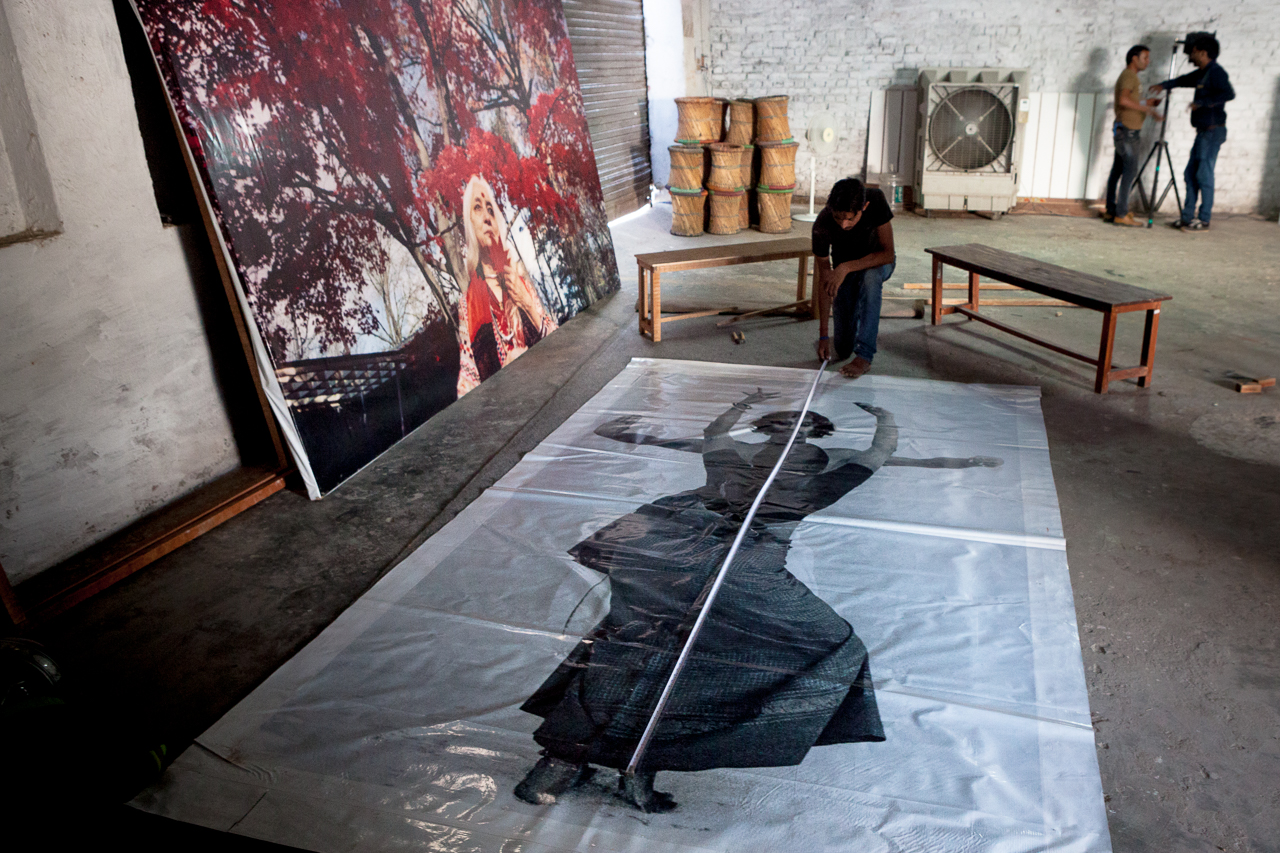 Carpenter measures an image to make the frame

New Delhi: Surrounded by the semi-urban chaos of Chhatarpur village in Delhi, sits a rice mill turned into a paint godown transformed into the Odd Bird Theatre, the venue for the Gati Dance Forum’s Ignite! Festival of Contemporary Dance, 2016. This is Delhi’s first warehouse turned into a black box theatre, which is basically a performance space that is simple, unadorned and essentially flexible in how it is used. The Odd Bird, for example, has artists rehearsing in the day time and the space could well be used for a storytelling performance or a contemporary dance show or a film screening in the evening. Theatres such as these became a part of the creative landscape in the 1960s in the US and Europe, providing a nurturing space for experimental art. Essentially the aim was to break down the barriers between the artist on the formal stage and the audience and create new forms of engagement in the creative process. Says Virkein Dhar, director of the festival (October 9-16) and one of the three founders of the Odd Bird Theatre, “The idea is to break the barrier, to create a space where the artist is not an unapproachable figure; rather, she is someone with whom you can have a conversation, intimately.”An architect and dancer, Dhar emphasised that “the formality of announcing a piece is something we’re completely trying to do away with. We just let the performers introduce themselves whichever way they like.” A space transformed: the Odd Bird lights up in the evening

On October 8, 2016, the day before the start of the festival, the Dhan Mill Compound exuded a youthful exuberance as volunteers, artists, performers, curators, carpenters, technicians and light designers buzzed around helping put the finishing touches to spaces that would house the performances and exhibition for the Ignite Festival. Amidst the constant whirring of table fans, coolers and exhaust fans, a group went through the paces of its performance at one end of the godown-turned-performance space. At the other end, carpenters hammered an 18 feet by 12 feet wooden frame into shape on which to stretch images of the late dancer/choreographer Chandralekha. A large size open-air exhibition of more than 40 photographs of Chandralekha and her choreographic work, curated by noted writer/critic and longtime collaborator Sadanand Menon, lies at the heart of this year’s festival. Carpenter measures an image to make the frame

Menon, who is one of the Trustees of the Gati Dance Forum, sketches the context within which to see this festival. Gati, he says, represents the coming of age of the contemporary dance movement in India, the current phase of which can be traced to the bursting on to the scene of choreographers like Chandralekha and Kumudini Lakhia in 1984 at the East-West Dance Encounter. Stretching the image over the frame A workman mounting images for a performance

Both these senior dancer/choreographers produced a large number of students/dancers who went on in the late 1990s to emerge as the new face of contemporary dance in India. This got consolidated into two youthful institutions – Attakkalari, started by Jayachandran Palazhy in Bangalore, and the Gati Dance Forum, started a decade later by Anusha Lall and Mandeep Raikhy, based in New Delhi.

“While these two institutions represent the institutional phase of contemporary dance,” says Menon,“there are a large number of individual performers/choreographers like Padmini Chettur, Navtej Singh Johar and Preethi Athreya who also contribute in edgy energy through the fast developing character of the contemporary dance movement.” He points out that one of the limitations of the biennial festivals that both Attakkalari and Gati have been producing over the past few years, as well as the performances of the individual choreographers, has been their dependence on the available formal spaces in various metros and small towns to showcase their work. The quest has been consistent to find more informal and accommodative spaces which would match the critical content of their work adding that, unlike other metros, Delhi has been lacking such informal spaces. “Therefore, the emergence of the Odd Bird Theatre promises to be a new hub for increasing experimentation and new ways of presentation and reception of the accumulative thrust of the contemporary dance movement,” he says. Even as lights are being fixed, performers do a run-through

One end of the Dhan Mill compound has gone the haute couture way, boasting names like TarunTahiliani. On the opposite end, outside the compound gate is the frenetic sprawl of a rural space being pulled into the urban unthinkingly with all its attendant stresses and discontents. Between these two lies the youthful Odd Bird, representing an attempt by artists to claim everyday informal spaces as their own – spaces that become an integral part of the performance.

All photos by Ajay Jaiman
Text by Arti Jaiman

Ajay Jaiman (www.jaiman.org) is the founder and principal consultant for a digital media consultancy/studio: impellio.com. In other avatars he is a programmer, graphic designer, photographer, documentary maker, instructional designer, publisher, and an internet entrepreneur.

Arti Jaiman is the station director of Gurgaon Ki Awaaz Samudayik Radio Station, Delhi-NCR’s only civil society-run community radio station. A former journalist with the arts pages of The Economic Times, her interest now lies in uncovering the layers of culture being bulldozed in urban villages of Delhi and Gurgaon.