Neil Nongkyinrih, a Musician and Friend Who Transcended the Divides of Cultures

The founder of the Shillong Chamber Choir, who was deeply influenced by western classical music, experimented with different sounds and musical cultures to fashion out a uniquely new sound. 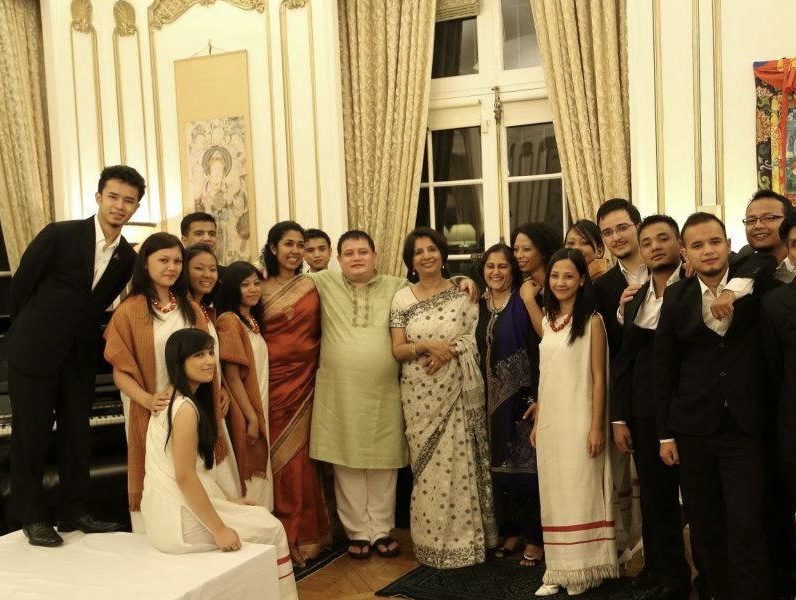 The author with the Shillong Chamber Choir. Photo: Special arrangement

“I am 16 going on 17, though I may look a little older”: that was the quintessential, irrepressible, the one and only, Neil Nongkynrih.

Our friendship dates back to the early 2000s beginning in Colombo, when Neil and the Shillong Chamber Choir performed at the Indian High Commission. We kept in touch. Subsequently, during my ambassadorship in China, the Choir accompanied by Neil performed in Beijing at the Park in the Forbidden City. It was quite an event. Everybody was deeply drawn to his brilliant, blazing musical talent.

Thereafter, during my tenure as foreign secretary, the Shillong Chamber Choir performed at the Rashtrapati Bhavan on the occasion of US President Barack Obama’s state visit in late 2010. They were a hit with the Obamas. Then, we met again during my ambassadorship in Washington in 2012 after the Choir had won top accolades at the World Choir Championships at Cincinnati.

Neil Nongkyinrih went too suddenly. He was 51 – a supremely talented musician and composer, at the peak of his accomplishments. For those who knew him as a friend, the loss of this quirky, irrepressible, straight-talking, compassionate, deeply caring and sensitive individual with boyish charm and music coursing through his soul, is hard to comprehend.

He was a man of amazing grace, unforgettable, a great ambassador of the soft power of northeast India, and a proud Indian. His infinite love of humanity set him apart and gave to his music, soul and substance in every note. He was in tune with the wellsprings of nature and creation.

We once corresponded about the mythical flower of the mountains of Meghalaya — the flower called ‘Tiewlarun’ which is hidden in the forests of those blue-topped hills, among the whispering pines. I think of him now, surrounded by the forest winds, like that mythic flower, below the splendid stars, among the waters turned to gold by the evening moon, blooming in the wilderness.

In the winter of 2020, he participated in a webinar I organised on the theme of whether a South Asian identity can be expressed through music. Neil told us on that occasion: “I am a very simple person.” He said he had been influenced by western music, studied piano in the UK, but when he came back to India, he wanted to discover his musical roots, his Khasi heritage, the music of India, and he had embarked on a new journey. It was a journey that brought him universal recognition.

Also read: Neil Nongkynrih, the Man From Shillong Who Made Wonderful, Unorthodox Music With His Choir

He spoke about the Christmas album he had just produced which showcased different languages, both of India and of the Middle East, including ancient Aramaic and Farsi. “My journey for a long time now has been to introduce people to different sounds, different cultures, and to do this in such a way that it becomes something they can digest,” he told me. He was happy that the members of the Shillong Chamber Choir came from different ethnic backgrounds, “with a strong, cohesive attitude…”

He was especially proud of the opera in the Khasi language —’ Sohlyngngem’— that he had composed. But even there, his emphasis was on how he had woven in diversity into the work, where East met West, “using a more global approach”, as he termed it, “so that we do not segregate”.

In his words, “Khasi is such a beautiful language, with gentle, soft vowels and even consonants that work perfectly for opera like Italian does.” He wanted ‘Sohlyngngem’ to be an opera “for the ordinary man. So, I have made music that’s accessible to the average viewer without making it average”.

On his return to India after spending 14 years in the UK, he had been disturbed by the “emphasis on Mozart and Beethoven”. He hated the snobbery “that the ultimate music is Wagnerian” — there were musicians in our region who had better voices than “the greatest opera singers”, and he cited the Pakistani singers in the Coke Studio recitals as an example. He was a fan of the tabla, the alaap, all the rich musical expressions of South Asia.

“I just like to speak the truth out, so that we do not have this hierarchy” — which said that there was nothing greater than western classical music. “But you give me a lovely melody from Sri Lanka — music is music, and while you can get the best instruments in the world, you cannot beat that which God himself created — which is the human voice.” At the same time, the creation of a musical identity among people of the South Asian region should not generate divisions, he stressed.

It was not as if Neil was rejecting western music. He explained, “For me, I had a great need to promote the Eastern side of me. It started with my own language, Khasi, and then it went to Hindi and Bollywood, too, even as I was writing an opera.” His return to India had been the beginning of a journey, where he had started to explore the different meanings of music and its many sources. He had this wonderful advantage of knowing both the worlds, East and West, in a unique symbiosis.  “I use a lot of dholaks now, that is my new love,” he exclaimed.

As we sound the bugles for Neil, I cannot adopt a tone of mourning for him, nor ring hasty orisons as the dusk envelopes this Saturday, January 8, the sad day of his funeral. I think of the inheritance he leaves behind for all the young ones he schooled, mentored, tutored and nurtured, the humility of the wonderful singers in the Shillong Chamber Choir (not just a choir, but a “social movement” as one of its members once termed it) and the happiness Neil brought to audiences around the world.

As was said at his funeral ceremony, the Shillong Chamber Choir is the legacy he leaves. For all these years, he was their good shepherd. Listening to the young men and women of the Choir as they spoke tearfully of Neil, I can understand why he must be so proud of them, and what he accomplished in creating this world-class group of musicians.

Although Neil was mortal as we all are, fashioned from the same imperfect timber of humanity, he strove to break free of the stagnant and the mundane, to rise above littleness. And this is how I remember this kindly light, this musical genius, snatched from our midst, too soon. His is a living, lasting memory that our grateful hearts will treasure.