MSV, the Man Who Knew Nothing But Music 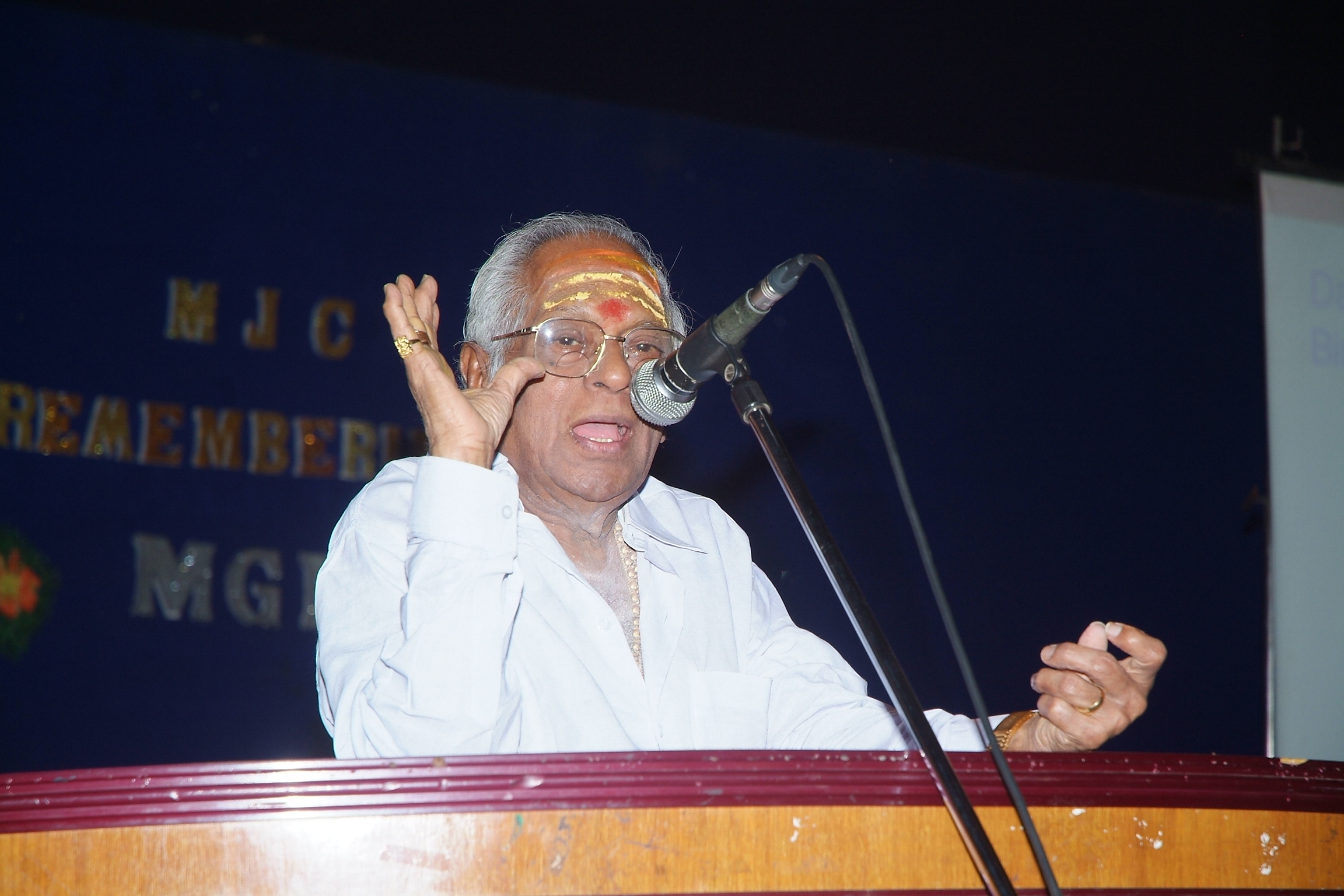 The story of Manayangath Subramanian Viswanathan would have ended in 1932, not in 2015, when his mother decided to drown herself and her four-year-old in a tank to escape penury. Legend has it that as mother and son debated who would jump first, MSV’s grandfather arrived to deny them a watery grave. His childhood after that momentous day was unremarkable, except for a passion for cinema. He sold snacks at the local movie theatre in Elappully, Palakkad. Sometimes, the payment was to be allowed in.

His musical talents were discovered by accident, when his future teacher, Neelakanta Bagavathar, spotted him singing and playing the harmonium by himself. His primary ambitions were to act and sing in the movies. The pull of cinema was strong. He began his career as a ‘boy’ in Jupiter Studios, cleaning the harmonium of music director S.M. Subbiah Naidu. His first film as an actor was Kannagi, a Jupiter production. Music, however, was always just under the surface.

MSV’s relationship with music has a touch of serendipity to it, like a great love story. It was almost as if he let music pull him towards it, before he gave it his all. He was not born into a musical family. His talents were discovered early on, but he chose to act instead of compose for film. And while his training in Carnatic music was extensive, he had no formal training whatsoever in world music, which he enjoyed and seamlessly adapted to Indian sensibilities with prodigious ease. ‘Thulluvadho ilamai‘ from Kudiyiruntha Kovil (MGR, 1968), and ‘Avalukkenna’ from Server Sundaram (Nagesh, 1964) come to mind. According to several accounts, MSV set the latter to tune in 15 minutes. And it took the formidable T.M. Soundararajan the rest of the day to record it. A tricky bit with the rhythm illustrates casual, aesthetic virtuosity.

He could hold a tune from start to finish, There was never any ambiguity in them, even if he occasionally indulged complexity, like in the National Award-winning ‘Ezhu swarangalukkul‘ in Apoorva Ragangal (Kamal Hassan, Srividya, Rajinikant, 1975). With a rich, organic quality, his tunes seem to make their way through the grammar of a raaga, occasionally conduct a brief liaison with a few bars of western music, and finally wrap themselves to a close all by themselves.

Consider ‘Kadhal siragai‘ from Palum Pazhamum (Sivaji Ganesan, 1961) or the poignant, dreamlike ‘Malarnthum malaraatha‘ from Pasamalar (Sivaji, Savithri, 1961), the deceptively simple ‘Mauname parvayal‘ from Kodimalar (Muthuraman, 1966), the seductive ‘Anbulla manvizhiye‘ from Kuzhanthaiyum Deivamum (Jaishankar, Jamuna, Kutti Padmini, 1965), or the… this is dangerous territory. MSV, as a solo composer, and as part of a duo with Ramamurthy, a violinist with S.M. Subbaiah Naidu, worked on over 1,700 films. A playlist with a lazy, indulgent tag like ‘great tune’ would take a while to compile.

The inimitable (though many try) voices of TMS, P.B. Srinivas, P. Suseela and Sirgazhi Govindarajan blossomed, blushed, sparkled and shone within the liberating notes of MSV’s music. He did more than give hits to these singers. He immortalised them within an indestructible amalgam that was his song, where it is impossible to separate or shut out music, lyric or voice. The catalyst is MSV’s affinity for poetry. No wonder he and Kannadasan, the iconic poet and lyricist, were such fast friends.

He never had a problem with setting Kannadasan to music. There is latent music in every word, every syllable, he believed. As far as poetry is concerned, Kannadasan has a parallel in Gulzar. The latter boldly brings in the abstract into his lyrics and occasionally, the words and the meter grapple for space within a song. One wonders if he hasn’t found his MSV yet. Kannadasan had a cheeky proclivity towards distilling an everyday conversation into lines of lyric. MSV’s style is less about making words sit in a meter than about a musical empathy with the meaning. Could anyone else have set to tune the first line of ‘Sonnadhu nee daana‘, of Nenjil Or Alayam (Muthuraman, 1962)? Or so marvellously brought out the onomatopoeia of the third word in ‘Attuvithal yaroruvan adathaare kanna‘ from Avanthaan Manithan (Sivaji, 1975)?

An extension of his poesy was his feel for genre. While Ilaiyaraja is celebrated as the rescuer of Tamil folk music, songs like ‘Thazhayaam poo mudichu‘ in Bhaaga Pirivinai (Sivaji, 1959) and ‘Aarodum mannil yengum‘ from Pazhani (Sivaji, Muthuraman, 1965) ensured there was something of the rustic left to save in the film world.

Occasionally, MSV sang. As a poet once put it, “MSV’s is the voice of your conscience. You’ll want to listen, even if it doesn’t tell you very pleasant things.” ‘Sollathan ninaikkiren‘ from Sollathan Ninaikkiren (Sivakumar, 1973) is not a bad example.

A star from an era that prized monopoly and produced insecure artists with an exaggerated opinion of their own artistic invincibility, MSV turned out to be an experimenter and cheerful collaborator with a later crop of lyricists, singers and music directors. That A.R. Rahman looks up to him and Ilaiyaraja considers himself fortunate to live and work as his contemporary is telling of his magnanimous spirit. Talents like S.P. Balasubrahmanyam, K.J. Jesudas and S. Janaki owe much to him. ‘Unakkenna mele ninrai‘ in Simla Special (Kamal Haasan, 1982) stood its own, bang in the Ilaiyaraja era. Had he had time, perhaps MSV would have adapted to higher technology, richer orchestration. However, one finds it curious that even at the wane of his career, MSV’s music seemed as contemporary as the best of them. For the uninitiated, it’s hard to tell if the blockbusting ‘Engeyum eppothum‘ and ‘Sambo siva sambo‘ from Ninaithale Inikkum (Kamal Haasan, Rajinikant, 1979) was composed by MSV or by Ilaiyaraja.

“He knows nothing,” Kannadasan once said of MSV, launching into an anecdote. The former loved to hold forth on a variety of subjects, including politics, love and other intoxicants, and his peculiar, inseparable friend MSV. “We boarded a plane and he misread Toilet and asked me what the rent was. We landed in Kabul and asked me what Afghanistan meant and who Muhammad Ghori was. We went to Tashkent and he was listless. We went to Leningrad (Saint Petersburg) and when I introduced him to someone, he mistook engineering for a vegetable. He was really quite hopeless. Our host took us to the Tchaikovsky concert hall and showed us a piano that the great Russian supposedly played on. Viswanathan couldn’t pronounce Tchaikovsky. But he sat at the piano and for 30 minutes, playing the maestro’s concerto. Naturally, the Russians were spellbound. He really knows nothing. Nothing but music.”