#MeToo Campaign Showed That Misogyny is a Deeply Cultural Issue. Here's Why It Was Sorely Needed

Not only did the campaign address the fact that sexual harassment is an everyday occurrence for women, it also shifted the narrative away from the issue being purely a law and order problem. 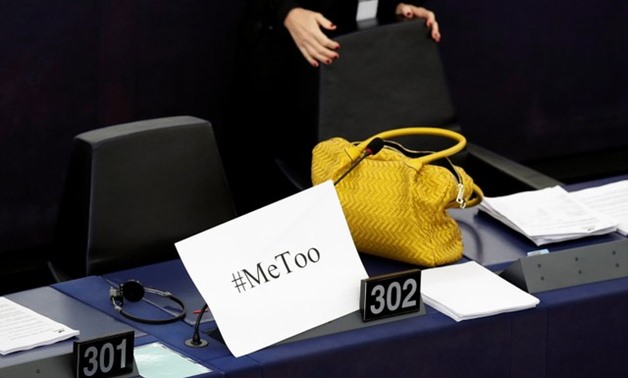 A placard with the hashtag “MeToo” is seen on a European Parliament member’s desk in Strasbourg. Credit: Reuters

In 2007, activist Tarana Burke founded a movement called ‘Me Too’ to support victims of sexual assault. On October 15, in light of the Harvey Weinstein case, actress Alyssa Milano tweeted: “If you’ve been sexually harassed or assaulted write ‘me too’ as a reply to this tweet.”

If you’ve been sexually harassed or assaulted write ‘me too’ as a reply to this tweet. pic.twitter.com/k2oeCiUf9n

Over the last week, social media platforms in several countries around the world trended with the hashtag #MeToo. The campaign gathered over 12 million posts and reactions on Facebook in the first 24 hours and was tweeted about nearly 1.6 million times within a span of a week.

It wasn’t long before people began including personal accounts of harassment with their status updates reflecting not just that sexual harassment is widespread but also that it occurs at various stages of a woman’s life – at the hands of friends, acquaintances, colleagues and strangers alike and in different locales ranging from so-called ‘safe spaces’ like homes, schools and universities to unavoidable public spaces such as streets and on public transport.

Here’s why the #MeToo campaign should be looked at as an important moment reflecting a collective experience of trauma and injustice – one that implores us to reflect on its pattern, causes and potential remedies.

First, the widespread nature of the campaign drew attention to sexual harassment as a commonplace and everyday occurrence for women. Several people expressed dismay and shock at their social media feeds being flooded with female friends posting #MeToo, and admitted to it being more ubiquitous than they had previously realised.

Also read: How to Make Sense of the Radical Challenge to Sexual Harassment in Academia

Second, the nature of the confessions about assaulters being from within family and friend circles helped to shift the narrative away from sexual harassment being purely a law and order problem and towards misogyny as a deeply cultural issue. It poses an affront to the idea that actions, attire or precautions have any bearing on the incidence of sexual assault and challenges all forms of victim blaming that have thus far been a key narrative within discourses surrounding sexual harassment.

Third, even for those aware of the extent of sexual harassment, the campaign powerfully altered the form of that knowledge from an impersonal acceptance of it afflicting the unknown and nameless to a much more personal and jarring knowledge of several loved ones, family and friends being victims.

Finally, and the most important, the collective nature of the confessions allowed many to draw courage from solidarity and let go of long-held feelings of shame and guilt that had so far disallowed them from ‘coming out’ with their stories. This is an important step in reclaiming dignity and equal personhood.

While some men have expressed solidarity and deep regret for the reality that women have to live through, others have had divided responses. Some have questioned whether such ‘trendiness’ means anything and if ‘clicktivism’ counts as activism, while others have asked whether it is appropriate to share such personal accounts on a public forum.

While some campaigns involve the relaying of popular feelings and opinions, which raises questions of authenticity, the individuals posting #MeToo are sharing an individual, difficult set of facts. The barrier to participation is higher than normal, making the viral nature of the campaign even more significant. Writer Alexis Benveniste’s tweet reminding people of this was retweeted over 56,000 times, making it the most retweeted post from the campaign.

Reminder that if a woman didn’t post #MeToo, it doesn’t mean she wasn’t sexually assaulted or harassed. Survivors don’t owe you their story.

The relegation of such discussions to the ‘personal’ space is exactly what has allowed it to persist. The irony of asking someone who has experienced such unwanted and impersonal sexual advances to treat this as a ‘personal’ matter is also rather strident.

Even when the issue of sexual harassment does surface publicly in the mainstream press, it gets bucketed into an issue of law and crime rather than bias and norms. Based on analysis from the Media Cloud project at the MIT Media Lab, news coverage around the #MeToo campaign was no different.

Looking at the coverage of the campaign in over 1,500 English language news sources from around the world, the most prominent themes auto-detected by the system to talk about the campaign were ‘sex crimes’ and ‘crimes and criminals’. Missing from the most frequently used words were mentions of terms like ‘inequality’, ‘patriarchy’, ‘power’ or ‘bias’, with the key focus being Weinstein.

Top themes auto-detected and most frequently used words in the global English media’s coverage of the #MeToo campaign, based on analysis by the Media Cloud project at the MIT Media Lab.

A frequent criticism of media reportage around powerful (especially white) men accused of rape, Weinstein was forgiven of strong, negative descriptors such as ‘sex offender’, ‘sex predator’ or even ‘pervert’ despite the countless cases against him. As visible in the word tree from the MIT Media Lab’s analysis below, on average, the most negative descriptor used was ‘disgraced’, while film or movie ‘mogul’ was the most common.

Word trees showing the most frequently used words to describe Harvey Weinstein within the coverage of the #MeToo campaign in the global English language press, based on analysis by the Media Cloud project at the MIT Media Lab.

The trouble of framing sexual harassment as a law and order problem is that it distracts from how deeply cultural the problem is. Perpetrators of sexual harassment are all around us and live amongst us – as journalists, politicians, media personnel, corporate bosses and family and friends. A study of over 100 convicted rapists in India found that the assaulters were not ‘monsters’ from the fringes of society, but largely reflected ideas of patriarchy and power and a lack of understanding around the idea of consent. Correcting such social biases starts far before the problem reaches the courtroom.

Presenting the problem through more comfortable frames as the mainstream media often does, or judging it as too personal for a public platform only deepens the problem. Hopefully, the #MeToo campaign has served a purpose by pushing us to reflect and have uncomfortable conversations about gender in society. Contemplating on our own bias and behaviour is the next difficult thing to do.

Sanjana Haribhakti has worked on gender advocacy at SEWA, Delhi and is a recent post graduate from the London School of Economics. Anushka Shah works as a researcher at the MIT Media Lab in Boston.