Let Us Not Buy What TVF Is Selling – Skin-Deep Feminism

TVF's instant dismissal of sexual harassment allegations against its CEO instead of promising an independent probe reveals flaws in the web entertainment industry’s understanding of feminism. 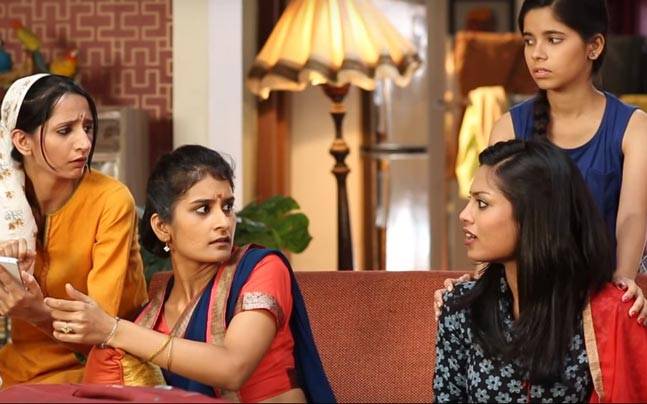 Still from a video on marital rape from The Viral Fever’s channel Girliyapa. Credit: YouTube

In the last couple of days, two cases of sexual harassment have been registered against the CEO of The Viral Fever (TVF) Arunabh Kumar in Mumbai. At this point, the details of the incident are common knowledge. An anonymous blog post published on March 12 on Medium titled ‘The Indian Uber – That is TVF’ (which has since been taken down) accused Kumar, the founder of TVF of repeated acts of sexual harassment. After that, multiple women came forward on social media to compound these allegations with their own stories of molestation and harassment at the hands of Kumar. TVF’s official reaction, as well as that of the writers, actors and directors involved in its various shows, ranged from knee-jerk dismissal and intimidation to veiled threats. It is such a textbook example of how not to respond to allegations of workplace harassment that it might soon find its way into academic courses on gender sensitisation.

One response stands out for what it reveals about the feminism of digital entertainment in India in the Internet age.

Amit Golani, director at TVF, thinks that the feminist credentials of his enterprise and colleague are solid beyond questioning because TVF “champions” a “woman-centric channel”. Within his scheme of things, sketches satirising impossible beauty standards or puritanical notions of sexuality equal genuine commitment to gender equality. This ridiculous, reductive equation sums up all that is wrong with TVF’s – and perhaps the web entertainment industry’s – understanding of feminism.

Since their inception, digital entertainment start-ups have positioned themselves as change-makers where cultural production is concerned. These young guns were here to shake up the system by experimenting not just with content but also form. They made comic sketches, web series, mockumentaries and more. They made no bones about catering exclusively to the Indian youth, invariably middle class and upwardly mobile. A demographic that had resigned itself to foreign fare – American fantasy and British sitcoms – suddenly found itself reeled back in with clever, intensely relatable stuff.

Feminism was prominent among the liberal ethos these start-ups espoused in their work. The young and the restless, their core demographic, had come to expect a certain kind of progressiveness in their entertainment. Third-wave feminism of the 1990s, which interrogated representation of gender in various media, left indelible imprints on the culture industry in the US. It naturally influenced a generation of Indians which was reared on, and which still engages with, this easily accessible media. This combined with newly sensitised producers of culture and home-grown forms of activist agitation (in the real and virtual world) made it impossible, and undesirable, to ignore the movement.

The F-word, still a scarlet letter for many, gave them an undeniable edge with their audience. They talked about society’s double standards and lampooned middle-class morality. They made web series which featured female protagonists who moved alone to big cities, prioritised careers over family, had pregnancy scares and were generally free to explore life’s multitudes without narrative judgment.

The creators, actors and writers involved wore the badge proudly, sat on gender panels, and championed equality initiatives. And we, as an audience, couldn’t be happier about it. Those of us who, through academia or activism, were already members of the feminist brigade, finally had entertainment that wouldn’t result in death by eye-roll. Those who weren’t were now exposed to the germ of an idea which, to butcher two metaphors, might flower into wokeness one day.

The TV shows, comic sketches and web series we consumed and recommended then came to be a part of our feminist identity, as much as the books we read, the icons we celebrated and the practices we championed. Of course there were some issues: certain nuances were lost, behind-the-scenes male-to-female ratios were problematic, etc. but these didn’t detract from the overall brand.

And then came the allegations.

And then followed the responses.

Andi Zeisler in her book We Were Feminists Once identifies a contemporary phenomenon where feminism has been reduced by neoliberal forces into “an identity that everyone can and should consume.” These are the agents that convince you that feminism is chic, fun, sexy and, most importantly, easy. It’s the club where ‘woke baes’ will be found partying, This-Is-What-A-Feminist-Looks-Like t-shirts and We-Can-Do-This Rosie tattoos in toe. Recent events are further evidence that this is the club TVF belongs to.

The problem goes beyond just Kumar; something is rotten in the organisation itself. It is evident in TVF’s official response that dismisses the allegation out of hand and threatens to bring the victim “to justice” instead of promising an independent investigation. It is evident in the instant pooh-pooh and conspiracy theories of schadenfreude floated by senior members like Golani and Biswapati Sarkar. It is achingly evident in the fact that Nidhi Bisht’s knee-jerk reaction is to generalise from her own experience with the accused and rubbish the allegation. She has since then, after other victims’ testimonies, promised what she should have in the first place: a proper investigation. It is evident in the fact that, according to the women, TVF has no HR department where they could register their complaint. It is evident in the fact that Indian Fowler, the author of the original post, still receives legal notices from the organisation for breach of contract for quitting suddenly.

Golani, Sarkar and Bisht genuinely seem to believe that they are feminists. They have certainly trafficked in, and profited from, producing and distributing feminist content. When push comes to shove, though, ideological contradictions are revealed, problematic assumptions come to light. Zeisler says that marketplace feminism is a “way to promise potential detractors that feminism can exist in fundamentally unequal spaces without posing any foundational changes to them.” This is certainly borne out by TVF and its members’ behaviour: their belief that the lack of a redressal system for harassment complaints, their blind support of Kumar and their instant dismissal of damning allegations doesn’t detract from their feminist credentials.

They have bought what they are selling: skin-deep feminism. It’s time we stopped.

Neha Yadav is a research scholar at BITS Goa.