'Future Generations Will Be Envious That We Saw Kishori Amonkar'

Amonkar's performances were never bereft of brilliant passages. Because, as they say in cricket, form is temporary but class is permanent. 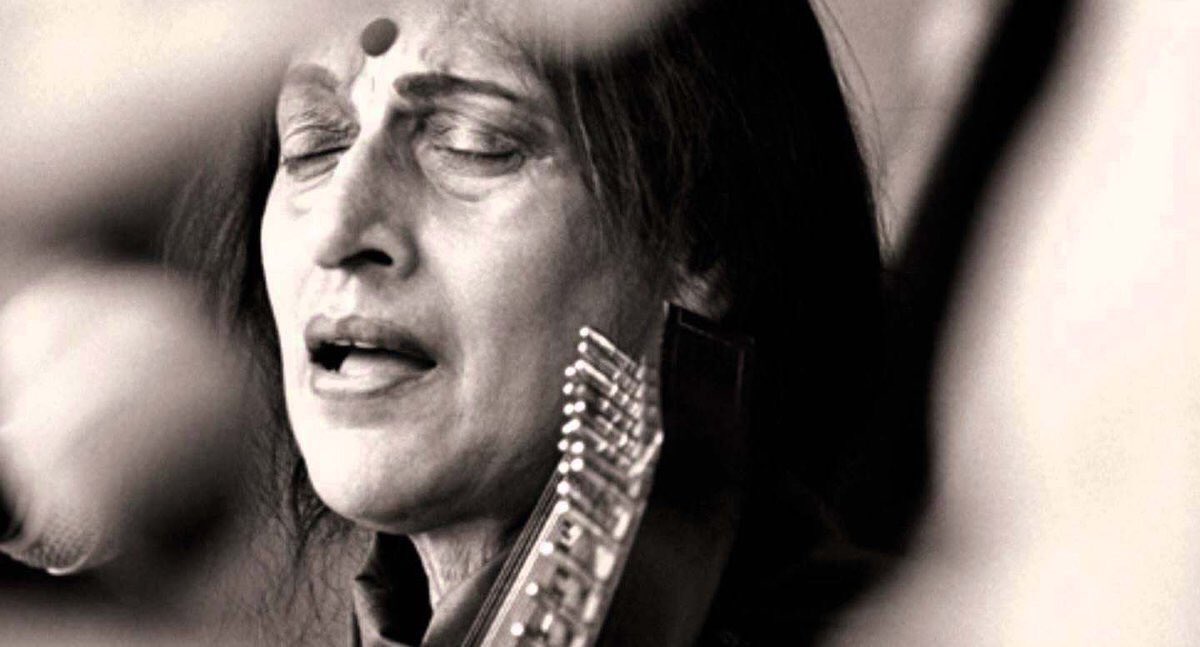 Before I had attended a Kishori Amonkar concert at New Delhi’s Kamani Auditorium in 1974, I had listened to an LP record of hers that had come out in 1971. It had Bageshri on one side and Bhoop on the other. I was very interested in classical music but could not understand its nuances, or figure out the raga structure or distinguish one gharana from the other. Listening to this LP was an experience for me, and I immediately fell in love with the music. When I heard Amonkar, live for the first time, I was simply mesmerised. She had that inexplicable quality which we call charisma. You can feel it, but you can’t analyse or explain it.

Since then, I must have heard her dozens of times, but was never disappointed. It is true that in the last decade of her performing life, age had begun to catch up with her – yet her performances were never bereft of brilliant passages. Because, as they say in cricket, form is temporary but class is permanent.

Amonkar was a trailblazer in the true sense of the term. When she appeared on the music scene, her Jaipur-Atrauli gharana had already produced stalwarts like Kesarbai Kerkar, Mogubai Kurdikar (Kishori’s mother), Lakshmibai Jadhav and Mallikarjun Mansur, to name only a few. The style of this gharana was invented by Alladiya Khan whose son, Manji Khan – an outstanding vocalist who trained Malliarjun Mansur for three years – died prematurely. His other son Bhoorji Khan devoted himself to imparting the gharana music to worthy students and did not perform much. It was Kerkar who carried forward the gharana tradition on the concert stage and was considered to be one of the best Hindustani classical vocalists in her prime. She also set an example by quitting the concert platform when she realised that she was past her prime.

While Kesarbai was the queen of the concert scene, Kurdikar too enjoyed a huge reputation as a top vocalist, but she always had to struggle to look after her family and often faced financial problems. Amonkar never forgot this all her life.

The Jaipur-Atrauli gharana was sometimes criticised for being unnecessarily intellectual and lacking emotional appeal. Amonkar looked towards the Kirana style and incorporated its badhat (note-by-note elaboration of a raga) into her style of singing, thus placing much greater emphasis on the emotive aspect of music. She also developed her own understanding regarding the basic bhaav (mood) of a particular raga and tried to express it through her singing. And, while doing so, she did not tinker with the basics of her own gharana and remained firmly rooted in its vocalisms. This was why she was not criticised for being unfaithful to her gharana traditions.

One may recall that Bhimsen Joshi attempted a similar feat, although he travelled in a completely different direction. Joshi, who belonged to the Kirana gharana, decided to make its laya (pace) a little faster and modelled his taans on those of Kerkar’s, thus leaning towards the Jaipur-Atrauli style.

While classicists like Krishnarao Shankar Pandit or Mallikarjun Mansur maintained that they sang the raga and were only a medium of its expression, romanticists like Kumar Gandharva and Amonkar believed that they expressed themselves through the raga, and the raga was a medium for their expression. The romantic approach necessitated greater emphasis on the emotional content and thus held a greater appeal for present day audiences.

Music can be learnt, but no guru can impart creativity and imagination. That’s why, one often listens to a technically flawless, but musically barren performance. In this regard, Amonkar was miles ahead of her contemporaries. She had all the taalim of her gharana as well as of other gharanas. She also learnt from Bhendi Bazar diva Anjanibai Malpekar – to whom she owed her enchanting meend (glide). She had a stupendous imagination, which helped her to delve deep into a raga and bring out its hitherto undiscovered and unlit recesses. The throw of her voice, the stylised enunciation of the words of the composition, and the elaboration of its literary as well as musical meaning were effortlessly integrated into a wholesome performance where her imagination had free play – leaving her audience in total awe.

When she was in a good mood, her performance would cast a magical spell whose effect would take days or even weeks to wear off. This was one reason why her fans never deserted her despite her fiery temper and unnecessary tantrums.

As Vamanrao Hari Deshpande, a well-known musicologist who learnt from Kurdikar as well as Amonkar, has written,  Amonkar was very bitter when records of her popular song ‘Geet Gaya Pattharon Ne‘ (in V. Shantaram’s film of the same name) suddenly vanished from music shops. Although he quotes her as saying she was happy about such experiences because in any case she would not have stayed in film music, it is a fact that she never forgave Lata Mangeshkar after this. She suspected that the reigning queen of the Hindi film music was behind this, though there was no way to prove it. In any case, when one listens to this song now, one realises that there was nothing great or unusual about it and it was good that Amonkar’s love affair with Hindi film music was short lived

An ardent admirer, Deshpande has described her eccentric behaviour in a chapter devoted to her in his book, Between Two Tanpuras. He writes: “To appear late for a performance and spend unduly long time in tuning up tanpuras has become her habit. If anyone goes to see her in the interval of a mehfil she would invariably talk in English. Once when Prof B. R. Deodhar and I went to congratulate her for her performance during the interval, she refused to take notice of Prof. Deodhar. Once when the staff of the Reserve Bank had organised a recital for Dr C. D. Deshmukh, ex-finance minister, she kept the chief guest waiting for half an hour.”

I too have witnessed many such instances in Delhi but the one that has remained with me is the bitter spat that took place in public between Amonkar and Shrikrishna Babanrao Haldankar at Bhopal’s Bharat Bhawan where a three-day seminar-cum-performance programme had been organised from September 15-17, 1995 to discuss ‘The Gayaki of Jaipur Gharana and Kishori Amonkar’s Contribution to It’. Amonkar was sitting on the dais along with Shrirang Sangoram, a musicologist from Pune, who was asking her questions regarding the Jaipur gayaki. The audience was also allowed to put questions to her. At some point, Babanrao, who had earlier presented a critical paper on the Jaipur gharana, asked Amonkar about the specific manner in which gandhar should be employed in Basanti Kedar. He had initially trained under her mother Mogubai Kurdikar and later shifted to the Agra gharana’s Ustad Khadim Husain Khan. Thus, he had preferred the Agra gharana over Jaipur.

Babanrao’s question suddenly threw Amonkar into a rage. From the dais she shouted, “Babanraoji, you know me. I am a street fighter. You are asking me about Basanti Kedar! Come here and sing it with me. I will show you how gandhar is used. You belittle our gharana. In your paper, you mentioned Kesarbai with the prefix Surshree but did not use the prefix Gaan-Tapaswini with my mother’s name.” Amonkar went on in this manner for a few more minutes, leaving Babanrao and the rest of the audience speechless.

Amonkar was acutely aware of the presence of the divine and her music too gravitated towards it. It may not be well known that she had completely lost her voice for several years and could not sing a note. A spiritual guru helped her get rid of this debilitating ailment and this experience turned her towards spiritualism and religion. Thereafter, her music became less an exercise in expressing herself and more an attempt to address the divine. She saw it as an offering to god. She also drew closer to the age-old rasa theory and began to associate a particular rasa with a particular raga. When she sang, she tried to evoke that particular rasa to its full extent, thus enhancing the musical charm and aesthetic beauty of her renderings.

Hers was such a domineering presence, very few women who came after her could escape her influence. For many years, it was difficult to find a female vocalist whose singing was not reminiscent of Amonkar’s style in some way. Very few musicians have been able to acquire such an influence during their lifetime. Addressing his contemporaries, Firaq Gorakhpuri said in one of his famous couplets that future generations would be envious of you that you had seen Firaq. We can say the same thing about ourselves. Future generations will be envious of us that we had not only seen Amonkar, but had also listened to her.