The Republic of Kiribati is experiencing baki-aba, or 'land hunger', as its population grows and atolls shrink. 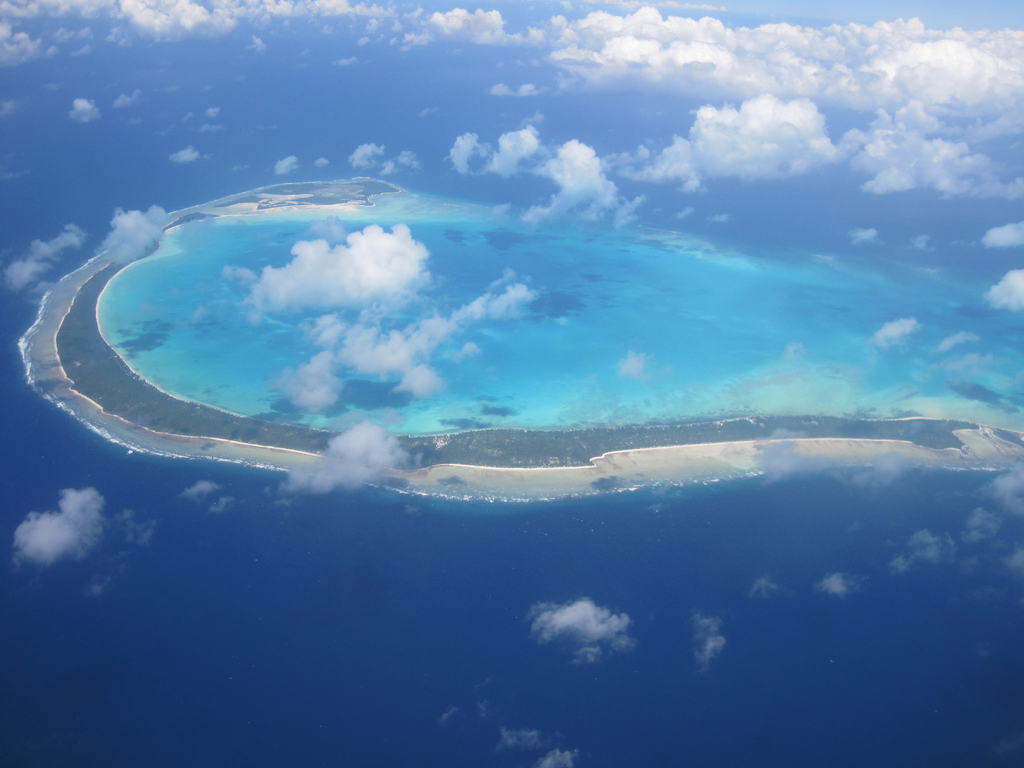 High tide keeps getting higher on the islands of the Republic of Kiribati – 33 coral atolls in the Pacific Ocean that rest only a few feet above sea level. In Kiribati culture, Nareau the Creator scattered stones to the north and south to create this mosaic of coral and rock. But, today, the effects of climate change are closing in and there’s no higher land to move to. Even as the atolls shrink, Kiribati’s population grows. The country is experiencing baki-aba: “land hunger”. In 2014, Kiribati president, Anote Tong purchased 20 square km on Vanua Levu, a Fiji island making this the first international land purchase intended for climate refugees.

For Kiribati, adapting to climate change might mean relocating entirely.

Pacific islanders’ identities are very much tied to their ancestral land, the physical islands on which they live. Migration may mean a national and cultural loss, especially when most traditions are preserved orally.

“They worry about the new country and if the people of that country will accept them,” Anterea Claire Anterea, co-founder of Kiri-CAN (Kiribati Climate Action Network International) and well-known climate activist in the country, said.

Pacific island nations are some of the most vulnerable spots on Earth from climate change. According to the latest Intergovernmental Panel on Climate Change (IPCC) report, small islands emit less than 1% of global greenhouse gas emissions, but they disproportionately suffer the effects of rising tides, drought, and extreme storms.

For example, sandbags line the shores of Kiribati and causeways are raised to the stop waves from breaking over the Kiribati’s only road. Kiribati also faces more frequent droughts that ruin crops and destroy farmer’s livelihoods. As sea levels rise, citizens worry about saltwater contamination of their freshwater lens – a rain-filled bubble of freshwater that rests below Kiribati’s soil, but still above the ocean water. Exacerbating climate issues, overcrowding in Kirbati’s largest cities has led to poor sanitation and public health problems.

Anote Tong, former president of Kiribati, advocates for “migrating with dignity.” This policy was designed to give citizens the tools to relocate legally, finding work in other nations like Australia and New Zealand. Tong prefers this slow and methodical transition to the alternative – moving tens of thousands of citizens at once in response to a catastrophic flood or drought.

A planned migration means that I-Kiribati (Kiribati citizens) can move on their own accord, instead of becoming climate refugees – victims of climate change left stateless with questionable legal rights and potentially perceived as burdens on any host country. Colloquially, the term “climate refugee” is used to describe any person leaving their home due to the effects of climate change, i.e. drought, flooding, or extreme weather.

Trans-nationally, the term “climate refugee” has no legal clout. That means climate refugees might not have human rights when they migrate to a new nation. In order to be a refugee – by current, global legal standards – a person must be facing political persecution.

In 2012, Ioane Teitiota, a Kiribati native, applied for asylum in New Zealand on the grounds that he was unable to grow food or find potable water in Kiribati. The courts eventually rejected the case and Teitiota and his family were deported. Teitiota could not prove persecution.

The court conceded that Teitiota met a “sociological” definition of a refugee, but not a legal one. Teitiota has appealed to the United Nations High Commissioner for Human Rights.

“First and foremost – let it be known we do not want to [migrate] and become refugees!” Linda Uan said. Uan is a household name in Kiribati, known for co-founding the broadcasting and media production company Nei Tabera Ni Kai Video Unit (NTNK) which shares over 400 stories on climate change and social justice.

“To an I-Kiribati mind – it is important to be self-reliant and we’ve been raised that way,” added Uan.
“Migration to a new country will not be possible without the means to support oneself.”

“If we train our people and they become skilled, then they would migrate with dignity and on merit, they would not be people running away from something,” Tong told Vice News. “They would be migrating, relocating as people with skills as members of communities they go into, even leaders, I hope.”

A 2014 Poverty Assessment says that about 2,000 young persons enter the labour force each year in Kiribati. Many seek jobs in other countries. The total unemployment rate in 2010 was 31%. In 2011, the government began a program at the Kiribati Institute of Technology for Technical and Vocational Education and Training to “upskill” young persons through carpentry, plumbing, nursing, accounting, and other marketable trades. Over half of young employees are out of work and many are migrating to South Tarawa, Kiribati’s capital, where life is perceived as ‘easier’ than on the outer islands. Others are seafarers or seek seasonal employment as fruit-pickers in Australia or New Zealand.

South Tarawa is now home to over half the Kiribati’s 113,000 people and exemplifies how climate change exacerbates poverty in a negative feedback loop. Water security for this overcrowded city is a major concern. I-Kiribati worry that the next drought and salinization will exhaust their supply in the freshwater lens.

With limited space and resources, the latest survey, a Household Income and Expenditure Survey in 2006, estimates that almost 22% of I-Kiribati live in poverty.

And yet, I-Kiribati have no word for “poverty.”

“We live simply and happily by what we have,” said Anterea.

Kiribati is only one example of how Pacific Island Countries (PICs) disproportionately suffer the consequences of climate change. According to a 2015 World Bank analysis, climate events like rising sea levels and severe weather events cost Pacific Island nations an average of US $284 million every year, making it nearly impossible for them to rise out of poverty.

At the International Climate Talks in Paris in December, 2015, Tong brought Kiribati’s climate conundrum to centre stage when he stressed that just a 1.5 degree Celsius temperature increase would be catastrophic for Kiribati and other small island developing states (SIDS) – the current Paris Climate Accord has set a goal to keep warming under 2 degrees Celsius from pre-industrial levels. Tong and other leaders also called for compensation from developed nations to help fund climate adaptation measures, but in the end, the Paris Climate Agreement did not contain any basis for liability or compensation.

“Our culture is very strong in helping each other through our family [and] community. If the Developed States have that value in life…then you know that they are real people,” said Anterea. “We need them to start saving our country [by] cutting their emissions.”

Kiribati is one of the least developed nations in the world with one of the lowest GDPs and per capita income. Foreign aid – mostly from Taiwan, Japan, Australia, and New Zealand – makes up about a quarter of the country’s GDP and goes towards infrastructure development and public health initiatives.

“Australia understands the potential challenge climate change presents to habitation in the Pacific. We are committed to working on these issues,” a spokesperson for Australia’s Department of Foreign Affairs and Trade spokesperson wrote.

To that end, AusAID funded the Kiribati-Australia Nurses Initiative (KANI), which began in 2004 and was canceled in 2014. This $20.8 million dollar investment gave sixty full scholarships for I-Kiribati students to attend school in Brisbane Australia to gain vocational training and employable skills to Australian qualifications. After completion of the program, students were able to stay and work. But most chose to go home afterwards.

“Weekly, we’re sending off more people to work on fruit picking, the hospitality industry, seafarers, fishermen etc. Interestingly enough, they’re all very happy to return home after they completed their contracts,” Uan said, speaking of all Kiribati’s labor migrants. “They talked about greener pastures abroad – very good soil, fertile, lots of room for more houses, quality goods, but that was there – not home. Home is good where our loved ones are, where we belong!”

Anterea has visited many outer islands to ask them if they would ever migrate because of climate change. Most don’t want to leave their country. She says that both young and old generations worry about losing their traditions.

Overcoming cultural and social differences have made it difficult for KANI students to adapt to life in Australia. Many reported homesickness. Students spent three months or more with Australian host families in order to adapt to Australian culture and practice speaking English. However, this assimilation strategy mostly made students feel isolated from one another. I-Kiribati live in bustling households with extended family. To move to an Australian home where they received their own quiet bedroom often exacerbated loneliness.

Maintaining these cultural practices helps KANI students cling to their identities. Three different waves of students have swept through the program, 87 overall. Some students are still finishing up their schooling. However, the pilot program was discontinued in 2014 due to low completion rates.

Sixty-eight students are expected to graduate in total – 64 as registered nurses, 3 as social workers and 1 with a Bachelor’s in Human Services. Sixteen students did not complete schooling to become registered nurses and five students quit before receiving any qualification at all.

“Everyone back on the islands is aware of the fact that sea level is rising and that climate is changing, but I don’t know why they don’t have that sort of urge, you know, to panic or to start looking for something to do before the future,” one student told O’Brien. “They just, they’re relaxing and they tell you, ‘Oh, we’d rather die here.’”

Critics say that KANI was not a cost-effective program since it cost on average $237,318 for one student to receive their Bachelor of Nursing. Others tout its successes as a way to send remittances to families on the homeland and prepare I-Kiribati youth for what’s seen as an inevitable migration.

Despite the criticisms and its cancellation, KANI is still cited as a model for planned labor migration – the kind that may make for a smoother transition for I-Kiribati.

“I believe that the KANI program is effective…because we witness that we have young people from our country that [are] working in Australia and allow them to stay as permanent resident[s]. We also see that they send good money back to help their family and that them young family settle and send their children to good schools in Australia,” said Anterea.

The KANI initiative arises from a recent history of Australia-Kiribati cooperation. In 2009, the two countries signed the Kiribati-Australia Partnership for Development, agreeing to work in tandem to raise the standard of living for I-Kiribati by improving basic education and work skills.

Australia plans to give $30.9 million to Kiribati in Official Development Assistance in 2017-2018 to increase quality of education, build a healthier population, and implement economic reforms. Other priorities include infrastructure improvements such as road, water, and sanitation projects.

KANI was not the first instance of labor migration in Kiribati. In the 1820s, several residents of Gilbert Island (a Kiribati island) were forced into slavery for plantations and agricultural labor in Australia, Fiji, Tahiti, and even as far away as Peru. Some 1,400 Gilbertese were sent to the Solomon Islands. This time, though, I-Kirbatis are determined that the decision to leave Kiribati will be just that – a decision.