Despite Sangh Efforts to Project it as 'Hindu' Festival, Story of Onam Prevails in Kerala

Malayalis are committed to celebrating it how they always have – irrespective of caste and community. 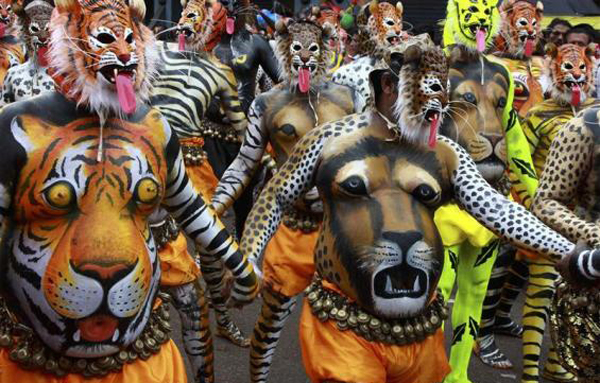 Dancers painted to look like tigers perform during festivities marking the end of the annual harvest festival of Onam in Thrissur, Kerala. Credit: Reuters

Battles between demons and gods are familiar to people everywhere. Good emerging victorious over evil is an inseparable part of these battles. In India, too, these victories are celebrated in different parts of the country and over the years, a certain amount of uniformity has emerged in the telling of the tales of these battles, victories and defeats. Rama is good, Ravana is evil. Durga is good, Mahishasur is evil. The Pandavas, helped by Krishna, are good, Duryodhana and his brother Kauravas are evil. It is no co-incidence however, that it is always the victors who symbolise good and the vanquished who are equated with evil.

An exception to this has been the battle between Mahabali and Vamana and the way it is remembered and commemorated by Malyalis everywhere and of course in Kerala.

Mahabali was a legendary king of Kerala. He was the king during a golden period and all his subjects enjoyed the fruits of justice and equality which resulted in a plenitude of all that they needed to live contented lives in harmony with each other and with nature. As was the wont, in those ancient times, the Devtas in their heaven became fearful and jealous of this beloved and virtuous king. They were afraid that his piety would enable him to rule them in their heavenly abode and they went to Vishnu, begging him to rid the earth of Mahabali. Vishnu was aware of Mahabali’s virtues. Legend has it that the fact that Mahabali was an Asura who did not believe in human inequalities was what made Vishnu accede to the Devtas’ request. He assumed one of his several avatars and descended to the earth, to Kerala.

He could not confront him because Mahabali was true to his name, a renowned and matchless warrior. Vishnu in his avatar as Vamana, the dwarf, could only challenge him with deceit and treachery. Vamana approached Mahabali as he was completing his prayers and stood before him as a supplicant, a Brahmin dwarf. Mahabali looked upon him with great sympathy and asked him to speak about whatever it was that he needed.

Vamana replied that he was landless and needed land. To this Mahabali replied that he would give him as much land as he wanted. Vamana said that whatever the amount of land he could cover in three steps would be his. Mahabali looked him up and down and, possibly with a smile, said that this was acceptable to him.

Once the promise had been accepted, the wily Brahmin Vamana assumed his real size. With one step, he covered the earth, with the next he covered the waters and to protect the world from complete destruction, Mahabali placed his head below his foot as he raised it to take his third step. Vamana pushed Mahabali and he fell far below the earth to paatala lok (hell) to which he was now consigned.

The people of Kerala however, could not forget their King and the golden period of his rule. As a result of their laments, Mahabali was allowed to return to Kerala for ten days every year just after the crops were harvested. His return was a return of the time of plenty and rejoicing for all the people of Kerala who celebrated this period as the Festival of Onam, a festival without any prayers to any idols, a festival of music and good food in which all Malyalis all over the world participate. 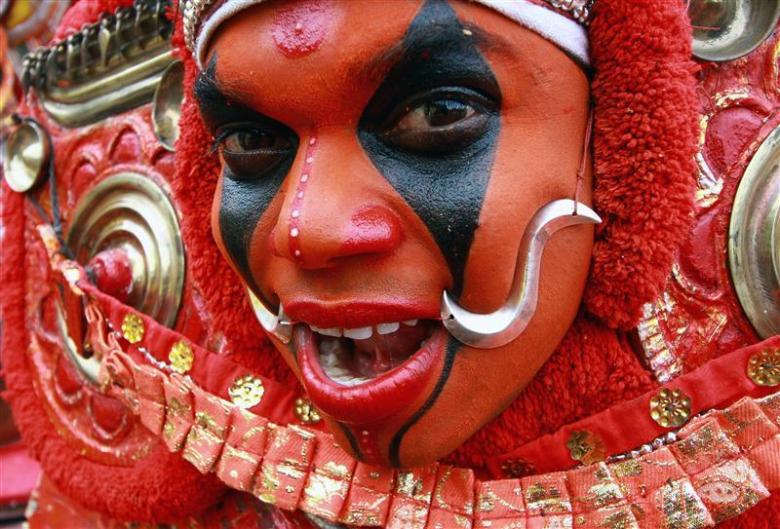 A dancer performs during festivities marking the start of annual harvest festival of Onam in the southern Indian city of Kochi in Kerala. Credit: Reuters

There are a few isolated temples to Ravana which are mostly neglected and falling into disrepair;  there are some tribals in Bihar and Bengal where Mahishasur is venerated and his killer, Durga, looked upon with some amount of contempt; there is even a small, mostly unknown, temple to Duryodhana in Kerala where there are three small idols of him, his mother and sister and where a celebration is held every year; there are other memorials to the vanquished in different parts of the country but these are now neglected exceptions to the glorification of the victors.

It is only in Kerala where the vanquished Mahabali returns every year as the unchallenged King of Malyali hearts. Recently, however, efforts have begun to banish him forever to paatala.

In the last few years, the Sangh parivar has redoubled its efforts to emerge as an important political force in Kerala.  It has resorted to both money and muscle power along with the forging of alliances with caste and religious organisations. It has also launched an attack on Mahabali along with an attempt to replace veneration of that beloved king with worship of Vamana, Brahmin dwarf and avatar of Vishnu.

It seems inexplicable that a political formation desperate to win support in an area where it is relatively weak would attack a universally accepted icon of the entire populace in this area. Inexplicable until one remembers the loyalty that the Sangh parivar has always exhibited for Manusmriti. Throughout its political existence with all its twists and turns and many political avatars, this loyalty has remained constant, etched in stone.

At the time that the constitution, authored by Dr. Ambedkar, was accepted as the new Dharmashastra of the country, the RSS was clear and unabashed in its opposition and stated that there was no need for this Constitution. Manusmriti was and should be all that was required to govern the behaviour and ensure the rights of Indian citizens.  Loyalty to Manusmriti involves the acceptance of Varnashramdharma and Brahminism.

It is this loyalty alone that can explain the denigration of Mahabali that the RSS and its allies has been perpetrating for the last few years. He has been portrayed by some of them, as a ruler from some Northern region (even Iraq) who conquered Kerala. The state president of the Hindu Aikya Vedi (Hindu Unity Front), K.P. Sasikala, has said that “Vamana freed Kerala from the imperialist ruler Mahabali. He should be hailed as a freedom fighter.” 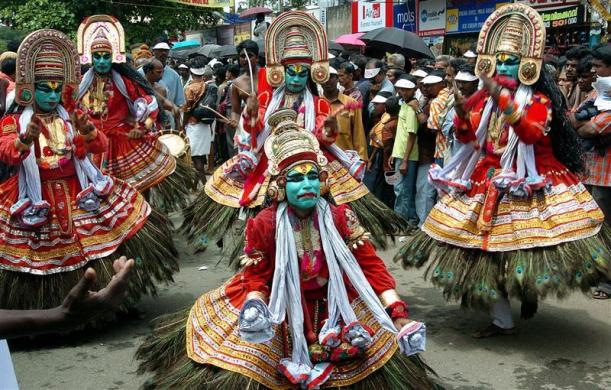 Simultaneously, as is the Parivar wont, Mahabali is being reduced to a true and devout worshipper of Vishnu and his Vamana avatar. In last year’s Onam special issue of the RSS mouthpiece Kesari Weekly, K. Unnikrishnan Namboorthiri, a professor of Sanskrit at the Government Sanskrit College, cited the Srimad Bhagawatham to claim that Onam was originally celebrated as Vamana Jayanti. “Vamana didn’t send Mahabali to hell,” he wrote. “On the contrary, the ruler was honourably rehabilitated to a place which is more comfortable than heaven.”

This is the way that Brahmanism has repeatedly treated those whom it has vanquished to preserve its system of social hierarchy based on birth. They have been ruthlessly eliminated, treated with scorn and calumny and then accorded a small and insignificant place in its pantheon of victors. This has usually encouraged the followers of the vanquished to reconcile themselves to accept new rulers and new rules.

This process seems unlikely to be repeated in Kerala. While some in the RSS want to reduce Onam to a ‘Hindu’ festival in which the Vamana avtar is worshipped and some Muslim fundamentalists are exhorting Muslims not to celebrate Onam because it is a Hindu festival, Malayalis seem committed to celebrating Onam in their own way. Irrespective of caste and community, they sing the Onam song ‘Maveli (Mahabali) Naadu vaaneetum kaalam, maanushar ellarum onnupole’ that celebrates the equality and justice that were the hallmarks of Mahabali’s rule. Many of them believe, in fact, that his killing was necessary for the introduction of the caste system in Kerala.

In a Kerala where Communists are an important part of the polity, where opposition to the principles of social and economic equality are akin to blasphemy, Mahabali has assumed new dimensions as a symbol of social justice. His return to Kerala every year is marked with feasting made possible for even the poorest by Left government-sponsored fair price shops and markets. His ten-day sojourn on earth holds out the promise of a more permanent era of equality, justice and harmony.

The Sangh parivar has not just ruffled feathers in Kerala by trying to replace Onam with Vamana Mahotsav, it has announced an important element of its agenda. As a result, more Asuras may emerge in forgotten corners of the country where they have been buried deep in the consciousness of the descendants of their supporters, their people.  The vanquished may yet emerge victorious.