The kangri, or kanger as it is locally known, is filled with embers and held against the body under a pheran, an overgarment unique to Kashmir, for providing warmth. 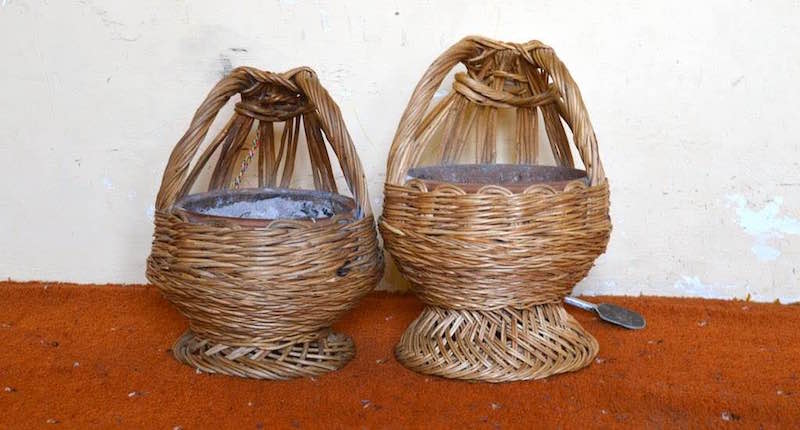 Kangris in a Kashmiri home, filled with embers and covered under ash that makes the embers last for upto 24 hours. Credit: Athar

The kangri, or kanger as it is locally known, is filled with embers and held against the body under a pheran, an overgarment unique to Kashmir, for providing warmth. 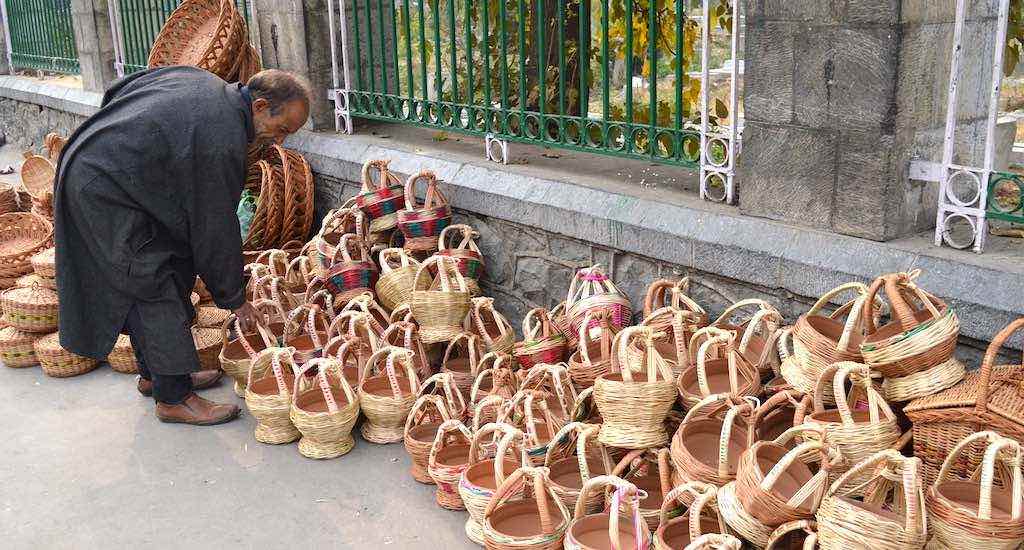 A vendor arranging kangris for sale on a footpath in a Srinagar market. Credit: Athar Parvaiz

Besides woolens, one thing that Kashmiris think of while making preparations for combating the chilling cold of winter is kangri, an earthen bowl encased in an exquisitely woven wicker basket. Kashmir experiences harsh winters, with temperatures as low as -80 C, but Kashmiris have traditionally used kangri and pheran for fighting against the cold.

The kangri, or kanger as it is locally known, is filled with embers and held against the body under a pheran, an overgarment unique to Kashmir, for providing warmth. Kashmiris call the kangri a mobile heater as it can be carried along anywhere under the pheran. Some keep the fire-pot under the blanket until it makes the bedding warm enough for sleeping comfortably and then remove it.

These local inventions, cherished by Kashmiris, keep serving the people of this beautiful land despite the onslaught of modern-day heating appliances in recent years. Kangris not only keep Kashmiris warm during the winter months, but also feed thousands of families by providing them with livelihoods.

The artisan families that make the kangris are spread across Kashmir in different villages. The potter makes the earthen bowl. The kangri-maker weaves the wicker basket around the bowl, providing two handles so that it can be carried easily, besides a base for balancing the kangri on the floor.

Making kangri needs a lot of skill and patience. Men and women collect the slender wicker twigs from the forest. They process the twigs by scraping, peeling, boiling and drying before weaving them into kangris. As each process requires skilled hands, thousands earn their living in the production of kangris.

“Making kangris, besides other wicker items, has sustained our family for decades,” Wazir Ahmad Ganie, a kangri-maker of Lalpora in Kupwara district, told VillageSquare.in. “I enjoy doing it as long as I get buyers.”

The numerous shops that sell kangris are proof that getting buyers is not difficult. “I sold around 1,000 kangris last year; and this year, I have sold around 600 so far,” Khazir Wani, a shopkeeper in Pattan Market in Baramullah told VillageSquare.in.

From the beginning of November, one can see the delectable presence of kangris stacked up for sale in every market across Kashmir. The sale lasts until early spring. Depending on the design, each piece costs between Rs 150 and Rs 1,500. But the kangris, which are commonly used for warming, are mostly sold at an affordable price range of Rs 150 to Rs 250. 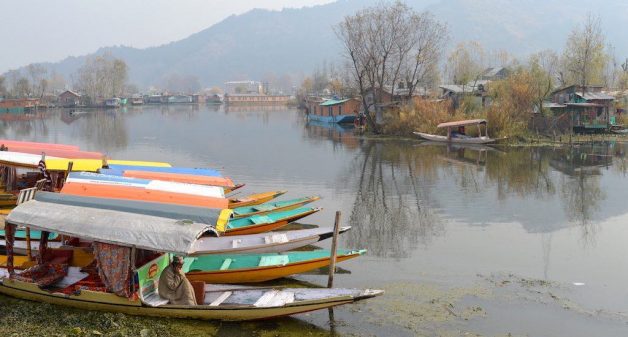 A boatman in Dal Lake warms himself with a fire pot under his pheran cloak. Credit: Athar Parvaiz

Besides their utilitarian value, Kashmiris cherish the kangri as a symbol of the culture and traditions of their land. Many Kashmiris use well-decorated kangris as thurible to burn aromatic seeds during weddings and other functions, especially when guests arrive.

Affluent families display kangris in their drawing rooms as a work of art and also present them to non-Kashmiri friends. These artistic kangris are expensive compared to the utilitarian ones used in winter. So, besides during winter, the kangri-makers earn a sizeable income by making artistic pieces.

Another small business associated with the use of kangri is making and sale of charcoal. Thousands of families across Kashmir sell charcoal, for use in kangris during the winter months, making a reasonable income.

According to charcoal seller Abdul Rashid, people, especially in rural areas, need charcoal to keep themselves warm. “I make at least Rs 15,000 every winter by selling charcoal,” Rashid told VillageSquare.in. For many, selling charcoal during winter brings an additional income.

Recently, the government of Jammu & Kashmir banned burning of leaves and twigs in an effort to control pollution. But people could be seen making charcoal for kangris, thus flouting the ban openly. They were scornful of the ban imposed by the government.

According to Mohammad Sadiq, a Srinagar resident who spoke to VillageSquare.in, charcoal in kangris help them keep warm during power cuts, thus emphasising the need for availability of charcoal in the market.

Footpath vendors in Srinagar said that they sell kangris in considerable numbers. “I buy 700 kangris a week and sell all of them,” Mumtaz Mir, a footpath vendor in Fateh Kadal, told VillageSquare.in.

Kangris in a Kashmiri home, filled with embers and covered under ash that makes the embers last for upto 24 hours. Credit: Athar

With the Kashmir Valley witnessing long power cuts in winter, many find it practical to use kangris to warm their homes. “I have two electric heaters at home. But they are hardly of any use as we get just two hours power supply in 24 hours,” said Reyaz Ahmad, a resident of Kupwara.

Some citizens said that even if there is a regular power supply, Kangri would still not lose its significance given its economic viability as compared to electric and gas heaters. “Using kangri for heating doesn’t cost much,” said Ahmad. “One can live without electricity and internet in Kashmir, but not without kangri,” quipped Mohammad Mairaj, a student, referring to the long power outages in most of the areas in Kashmir, besides the Internet bans.

“Whoever invented it must have been a genius. In spite of modern day technology, we are finding kangri extremely useful,” Rafiq Rather, a student in Kashmir University, told VillageSquare.in. It is obvious that the embers in Kashmir’s kangris would glow on, keeping people warm in winter and offering a livelihood to countless men and women.