"Aaj main suspend ho jaunga, par tujhe joota zarur marunga (Even if I get suspended today, I’ll make sure I beat you up)," a police officer allegedly told one of the journalists. 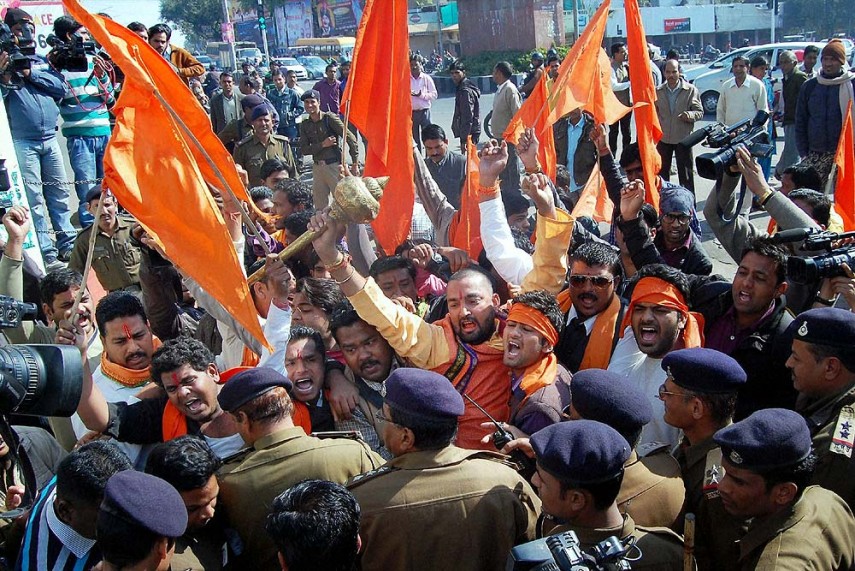 New Delhi: Asad Ashraf, a Delhi-based reporter at The Statesman, and two other journalists, Anupam Pandey and Vijay Pandey, were detained in Rajasthan on Saturday where they had gone to report on arms training camps that were being conducted by the Bajrang Dal in Hanumangarh.

The youth wing of the Vishwa Hindu Parishad (VHP) has been conducting camps in many parts of the country in which young children are trained to use arms and ammunition. The first ‘counter-terror training camp’ was held in Ayodhya in May 2016, organised by the Bajrang Dal. The ‘drills’ shot to the limelight after videos of the rigorous training sessions went viral, following which an FIR was registered against the organisers for promoting enmity among different communities.

Ashraf said that the camps in Hanumangarh, like most others, did not see the police intervening. When he asked the police if they were aware of the Bajrang Dal’s activities in the area, the police denied it.

Ashraf had got in touch with a member of the Bajrang Dal a day before leaving for Hanumangarh, expressing his interest in covering the training camps and cow protection activities in the city. To be safe, he hid his real name during this conversation. Rajasthan recently saw the lynching of cattle trader Pehlu Khan in Alwar by cow vigilantes. Calling himself Anupam Kumar, Ashraf told the party member that he was interested in covering the ‘generous’ activities of the Bajrang Dal in the area. On arriving in the city, the journalists were taken to a hotel which the party had booked for them. Party members met with the journalists at the hotel room and explained the motive behind such camps to them. “They told me they want to build an army to fight ISIS and other terrorist outfits,” Ashraf told The Wire.

These training camps are usually conducted in RSS-affiliated schools. A public appeal is made and sent to these schools, after which they start recruiting. Though the camp was already over when Ashraf and his colleagues reached Hanumangarh, Bajrang Dal members told him about an ongoing women’s training camp in a village bordering Pakistan.

“They proudly told me they are cow protectors and described their cow protection activities till date,” Ashraf said. “They told me they sometimes take the police’s help, but mostly, they prefer handling the matter on their own.” He was also taken to a gau ashram, where he was told to get his picture clicked with calves. He was also told about the subsidy of around Rs 50 that the government pays to them per day per cow.

“By this time, they were convinced I was one of them and we had developed a good rapport,” Ashraf said. They even gave him pictures of the camp: young girls posing with guns on the streets, boys dressed in saffron-coloured robes holding swords in their hands.

“They were insisting that I have tea with them when a local journalist named Baljeet came in. Baljeet started showing them something on his phone,” he continued.

He was then threatened, he told The Wire: “Main batata hun tujhe patrakar kya hota hai (I will show you who a journalist is),” the police allegedly said to him. “The police was more aggressive towards us than the Bajrang Dal members,” according to Ashraf, adding that they denied him access to his phone and interrogated him at length. One of the police officers apparently told Ashraf, “Aaj main suspend ho jaoonga, par tujhe joota zarur marunga (Even if I get suspended today, I’ll make sure I beat you up).”

“The Bajrang Dal members and the police were clearly very friendly with each other,” Ashraf said.

Ashraf managed to make a few calls to his friends back in Delhi and within minutes, the phone at the police station started ringing, demanding his immediate release. “Had it been any other person, who knows what would have happened. A commoner with no influential support would have been immediately arrested,” he said.

Even after Ashraf revealed his true identity, the police tried to instigate the Bajrang Dal members to file an FIR against him. “Tum nahin karoge to main karunga (If you don’t do it, I will),” one of the officers allegedly said.

Ashraf had appeared on a Times Now debate a year ago where Arnab Goswami had called him “an ISIS sympathiser” and “a Mujahideen sympathiser”. He thinks that’s what led to the change in the party members’ attitudes.

“These titles awarded to me by Goswami are on display on the internet and that must have made those people suspicious,” he said. He is planning to take a legal action against Goswami.