'Jolly LLB 2' Is Neither Smart nor Funny

The filmmaker takes the audience for granted, believing it will accept anything at face value. 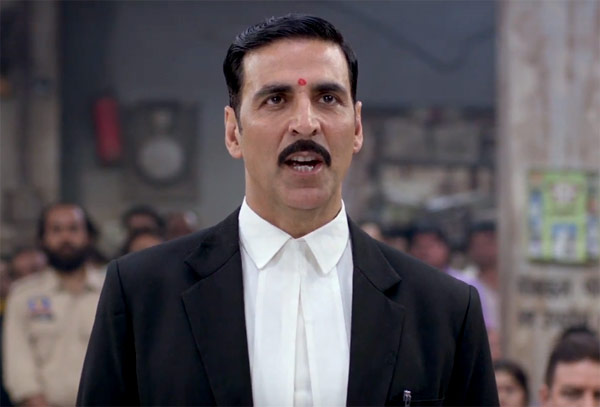 A still from Jolly LLB 2.

The obvious difference between Jolly LLB and its ‘spiritual’ sequel Jolly LLB 2 is the inclusion of a star in the franchise, Akshay Kumar. Set in Lucknow, Jolly LLB 2 features a leading man, the eponymous Jolly (Kumar), who, at least on the surface, has no hero-like qualities. He’s a servile assistant to a famous lawyer in the city, commutes to work on a scooter and doesn’t earn enough to gift his wife a “Gucci” dress. Jolly, like numerous men struggling in their careers, is ordinary. But here’s the difference: Jolly is played by Kumar, a Bollywood star, who can’t not be a hero. And director Subhash Kapoor ensures that. Like other Bollywood stars (Salman Khan, Shahrukh Khan and Aamir Khan), Kumar is no longer a young man. He can’t romance heroines in picturesque locales or perform gravity-defying stunts (Shahrukh tried both in Raees and failed), but he still needs to command and drive his scenes. So Kapoor heightens the pitch; he makes the new Jolly more witty, cunning and resourceful – qualities we associate with Kumar’s on-screen characters. Kumar’s persona, however, often contradicts the character he’s playing. It looks like he needs this film more than the film needs him.

The central conceit of the Jolly LLB films – of an ordinary corrupt man realising the inequities of society and fighting for justice – is fairly simple and idealistic, comprising elements that can make for an entertaining crowd-pleasing drama. There’s not much scope for complexities here and that’s fine. Jolly is good, the rival lawyer is evil. Jolly’s fighting the case for justice, the rival lawyer for money. Jolly will win the case, restore our faith in the Indian judicial system and send us home.

But even the safe tropes of a Hindi mainstream film require some writing and directorial talent. Kapoor, who’s both written and directed Jolly LLB 2, frequently fails to make this film convincing and engaging. For instance, it’s tough to buy Jolly’s ultimate realisation, brought about by one dream sequence, one song, one heated exchange. Jolly takes an important case, involving a senior cop and a terrorist, but gets convinced of his deceased defendant’s innocence just by flipping through his wedding photos. A small flashback shows the incident, but Jolly, without even conducting a basic investigation, couldn’t have known about its specifics. This is, quite simply, lazy and shoddy writing, which takes the audience for granted, believing it will accept anything at face value.

Besides, Jolly LLB 2 positions itself as a comedy, so enough attempts are made to mine its material for laughs. The judge, Sunderlal Tripathi (Saurabh Shukla), for example, is first presented as a buffoon, his presence and antics often used for humour. Nearly nothing about him is normal. He walks the court’s hallway, wearing earphones, dancing to a Bollywood number. He places five gavels on the table, before one of the hearings, for “self defence”. When a fight erupts in court, he hides under the table to protect himself. Before another hearing, he’s fixing errors in his daughter’s wedding card (changing “goons” to “groom’s”, “wets” to “weds”). It’s as if you can imagine Kapoor snapping his fingers, pacing up and down in his office, thinking, “Okay, how can I make this film more funny?”

Shukla though, after a few false notes (presumably an outcome of uninspired writing), is immensely entertaining and watchable. The various shades of his character – self-aware, cheerful, calm, strong-willed – make him endearing; some of his lines, if stripped off their forced humour, are even heartfelt. Elsewhere, the film continues in a predictable vein. More convenient plot points, some bordering on baffling, crop up, giving us little reason to stay with this film. Kumar transforms into a hero by the third act, slapping a lawyer (Annu Kapoor) in court; shutting him up by frequent retorts; dodging the cops, with a convict in tow, with astonishing ease. Jolly LLB 2 is marred by a flaw far too common to mediocre Bollywood productions: It doesn’t sweat the small stuff and, as a result, keeps us at a distance. Barring one scene between Kumar and Kapoor in its final few minutes, the stakes in the film never feel high – definitely not high enough for us to care.

Jolly LLB 2 bats for a fair world, for the plight of a common man, for everything just and moral. It opens with a quote from Oliver Stone, ends with one from Martin Luther King Jr. Kapoor’s sincerity is not in question here, his filmmaking talents are.