Two Poets Baptised by the Fire of History’s Greatest War

A corporal in the army of the Third Reich and a member of the Polish Resistance gave us incandescent poetry about the human condition. 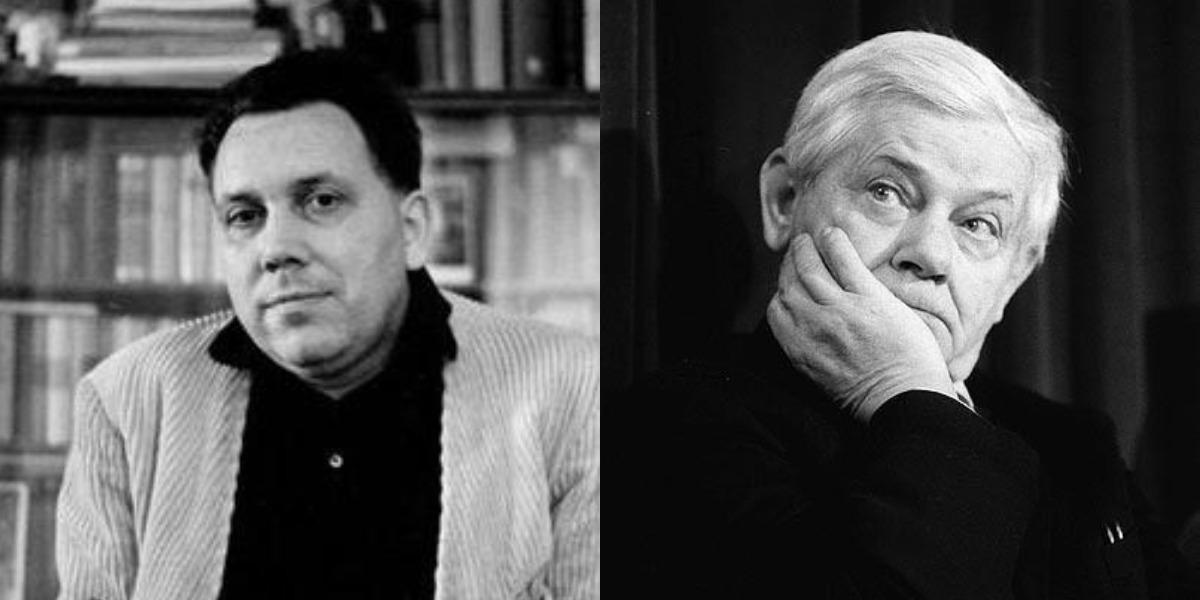 What happens when, after your world has been turned upside down, you reach back into your childhood but that world, too, has come apart irredeemably? It will be argued that this is a common enough experience for communities scalded by war. But, for Johannes Bobrowski, returned from the Soviet Union where he had been a prisoner of war during 1945-49, home-coming was made irreducibly poignant by the knowledge that the place he had once called home, was no longer part of his own country or anyone else’s. East Prussia had disappeared in the fire and smoke of World War Two, and the town of Tilsit, where Bobrowski was born and grew up, had been assimilated to Lithuania. Memories return the poet to the landscape that lies awake in him, despite the cataclysm it has fallen to his lot to live through:

In this night
I listen long for you
distant rivers, your first
ice. I hear
that small sound of rushes;
the village sleeps.

Childhood, sepia, a cold
wellwater, sandy –
the wooden bucket always
swung down. Who came?
who loosened the rusty chain?
ah, who drank?

Conscripted into Hitler’s army in 1939 at age 22, Bobrowski once said his choice of theme was ‘something like a war-wound’, involuntary and agonised. He began to write while at war on the eastern front, one of his first poems surveying the immensity of Lake Ilmen, near Novgorod, in Russia. Bobrowski is alive to the fact that he was looking out on the Russian landscape ‘as a stranger, as a German’:

Wilderness. Against the wind.
Numb. The river sunk
into the sand.
Charred branches:
the village before the clearing. Then
we saw the lake –

Looking out on the lake’s vast expanse, the German soldier knows Russia can hold him for days and months and years. And yet, when he is gone, the old life will reclaim the lake as though he had not been there, and

The
wolf crossed the clearing.
Listens for the bells of winter.
Howls for the enormous
cloud of snow.

This telescoping of the past, its conflating with the present, happens often enough in Bobrowski’s world. Boundaries of different kinds can also get blotted out in a trice here, though a sense of fitfulness is seldom the result:

That time of lilac-colour
when birds hung in the moving
sky, in the vanishing
light; the sky
stood still,
halted above the barn-roof,
silent, drew in the shadows.

The moving sky in the vanishing light changes its aspect effortlessly once it reaches the top of the barn, when, silent and still, it casts soft, simmering shadows beneath it. The ebb and flow of life continues unhurriedly:

And the hunter’s cry leapt
on the slope, towards the
quiet snow. O deep
blackness! your heart
full of light!

It is not as though paroxysms of terror do not convulse the mind. How could fear be absent from a landscape over which mephitic clouds of war and hate hung low and heavy?

And I know the steps,
the slope, this house. There is no
fire. Under the roof
lives the Jewess, lives whispering
in the Jews’ silence
— the faces of the daughters
white water. Noisily
the murderers pass the gate. We walk
softly, in musty air, in the track of wolves.

The image of the Jewess passing her days ‘whispering in the Jews’ silence’ even as murderers stamp noisily past her gate brings us to the sharp, jagged end of a question: did we see what there was for all the world to see? Or did we look away?

Will you walk over
the hill? The grey processions –
old men and sometimes boys—
die there. They walk
up the slope ahead of the slavering wolves.

Did my eyes avoid yours
brother? Sleep struck us
at the bloody wall. So we went on
blind to everything. We looked
like gypsies at the villages
in the oakwood, the summer
snow on the roofs.

Is there going to be a life after the Apocalypse? How can man presume to know the answer to that question, after all, that he has seen and been a part of? Will the tide of life rise again, much as night rises from the breath of the river Memel, the Memel on whose both shores the child Johannes Bobrowski had lived his childhood days? Or will that river, too, have dried up, or have sunk into a swamp?

Across the empty
market-place the wind,
a chicken’s-wing,
draws a track in the dust.

Fences. Lopsided
Crosses. Jackdaw-voice.
Who comes, a board on his shoulder,
who will cut a new sill
for the window, who
came, a green pot
under the shawl?

Here no one comes. The sky
finds a ribbon
lying and whisks it up,
moss grows on the
housewall, mist flies
round a white tower, and where
have you come from?

Across the moaning fences
of the pastures, across
the meadows near the bog-hole,
black water follows you, drowning your footsteps.

Bobrowski died in what then was East Berlin, on September, 1965, at the age of forty-eight.

Zbigniew Herbert also lost his home town, Lwow, to the Second World War when it was assimilated to western Ukraine as the city of Lviv. Wedged between Nazi Germany and Stalin’s Soviet Union, Poland had the worst of all possible worlds: of the six million Polish dead in the War (one in every five in pre-war Poland), civilians were the majority by a long chalk, many of them incinerated or gassed in Hitler’s death camps. 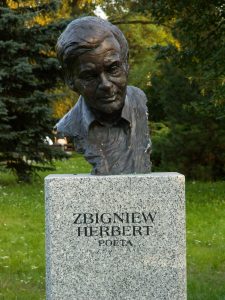 Perhaps more than any other poet of his time, Zbigniew Herbert gave voice to the collective experience of his luckless generation. He had been associated with the Polish Resistance, and his experience of those tumultuous years had toughened him enough that he managed to stay a nonconformist in post-war Poland as well. Irony, rather than pathos, is the nonconformist’s ammunition of choice, and Zbigniew Herbert is the master of irony. But he was equally adept in speaking in several other tones as well.

Herbert’s poetic creed is encapsulated in a conference talk he gave on modern poetry once, when he said his predilection was for the kind of poetry that achieved semantic transparency, where the object denoted by a sign, rather than the sign itself, holds the reader’s attention. “The word”, Herbert said, “is a window onto reality”. His sense may have been that the complex, many-layered reality which it is the lot of a modern poet to explore, demands an uncluttered idiom and a spare vocabulary so as not to blur the picture. Herbert himself lived by the creed. In The Rain, a younger brother remembers his older sibling thus:

With tender irony, the poem proceeds to catalogue the ‘improbable tales’ that the older brother tells compulsively: of Carthage’s imminent fall, of how Napoleon did not like him for no reason, of Hannibal, of ‘Roland Kowalski’. And then

It is easy to see why a contemporary poet described Herbert’s voice as “casual and whispering”. Let us turn to Remembering My Father, which begins thus:

The merest whiff of wistfulness sets off the compassion pulsing through the lines here. But Herbert also affects the nonchalant tone to perfection, and this is often an enabler for chronicling the bleak landscape of totalitarianism with a straight face:

In fact the Emperor is now a wood-louse who scurries across the floor, seeking remnants of food. Suddenly he sees overhead an immense foot about to crush him. The Emperor hunts for a crevice in which to squeeze. The floor is smooth and slippery.

Yes. Nothing is more ordinary than the dreams of emperors.

With equal felicity, though, Herbert can launch into a scorching narrative of a town which, though like no other we know, could be any of those hundreds of human settlements charred by the War. A Naked Town begins thus:

From here, the poem arches towards a crescendo where the abrupt, riddling movement of the lines is profoundly disquieting:

Herbert’s alertness to the human condition is anchored firmly in a sense of history: he is constantly seeking out analogies between the past and the present, thus acquiring a distance from his own, terrible times; but he is also ever sceptical of history’s fictions, “often ducking behind metaphors the better to tell a bitter truth”, as in To Marcus Orelius:

In Elegy of Fortinbras, consummate irony undergirds great passion as the little-known Fortinbras, Prince of Norway, addresses the dead Hamlet after he emerges as heir- apparent to the throne of Denmark:

Fortinbras reminds Hamlet that, in choosing death, he ‘chose the easier part an elegant thrust’, for ‘what is heroic death compared to eternal watching(?)’. He knows ‘what I shall leave (behind) will not be worth a tragedy’, also that he will never rival Hamlet’s mystique. A sense of weariness seeps through his final tribute to the dead prince:

Miraculously, Herbert’s Fortinbras has mutated from a near-nonentity into a tragic hero. Even as he dismantles high tragedy, then, Herbert resurrects the hero in the ordinary, non-descript individual. “Beyond the poet’s ego,” Herbert had written once, “there extends a different, obscure but real world. One should not cease to believe that we can grasp this world in language and do justice to it”. Zbigniew Herbert never gave up on this project of breathing life into the obscure, the ordinary. An obscene war had brought home the fact that it is the ordinary and unheroic that holds together man’s life on earth. ‘The rest is silence”.

Anjan Basu freelances as a literary critic, translator and commentator. He can be reached at basuanjan52@gmail.com