Taking exception to the widespread protests across the state in support of Jallikattu, the Supreme Court observed that such things cannot be permitted in a country governed by the rule of law. 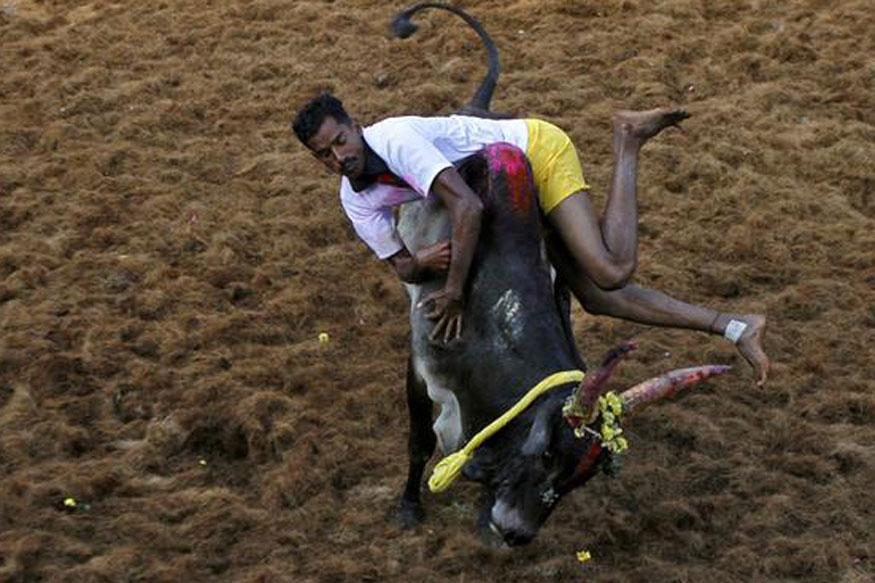 A bench of justices Dipak Misra and Rohinton Nariman took exception to the widespread protests across the state in support of Jallikattu and observed that such things cannot be permitted in a country governed by the rule of law.

The court, however allowed the Centre to withdraw its January 7, 2016 notification permitting Jallikattu with certain conditions and as a result of which there will not be any verdict challenging this notification. The court which had stayed the notification had reserved judgment on December 7, 2016.

Justice Misra told senior counsel K. Parasaran and senior counsel Rakesh Diwedi appearing for the state “tell your government that law and order holds primacy in civilised society and we can’t tolerate such incidents. Convey this to your executive to maintain law and order. We passed a stay order one year ago. Why these protests now [on the Marina Beach in Chennai and other parts of the state]. These kind of things should not happen. Violence was committed in sheer defiance of the 2014  judgment banning Jallikattu.”

Parasaran, maintained that the protests were peaceful and was an evocation of the public’s wish for a new Jallikattu law. The whole thing was peaceful, suddenly something happened.”  To this, Justice Misra said “Mr Parasaran, we are now governed by the concept of rule of law. Something like this suddenly does not happen and should not happen. When the Supreme Court, the final arbiter of the constitution, is seized of the matter, there should be complete obeisance and compliance.”

Justice Nariman observed “To say you want to protest peacefully is one thing, but to come out openly in defiance of  a Supreme Court judgment is quite another. We are only concerned about preserving the honour of the Supreme Court… and, mind you, there are no ‘ifs’ and ‘buts’ about that.”

Diwedi, said there was no breach of the ‘2014 Nagaraja judgment’ on Jallikattu. He pointed out that no Jallikattu event was held until the ordinance was passed on January 23. “Don’t the people have any right to protest. People were saying amend the law. The legislature could not have turned a deaf ear to public wish,” he said.

When Justice Misra pointed out that four people had died in Jallikattu events, Attorney General Mukul Rohatgi replied, “People die in every game. A cricketer died in Delhi, that does not mean we stop cricket.”

BJP MP Subramanian Swamy refuted the state’s contention that there was no violence and said a police station was burnt and in Pudukottai, Jallikattu events were held in defiance of the Supreme Court ban and two people were killed and 84 sustained injuries.

The bench told Tamil Nadu counsel “the question to be addressed is that whether Jallikattu can be allowed under the protection granted to certain tradition. The question whether the sport or the festival of Jallikattu and subsequent amendment to the Prevention of Cruelty to Animals Act, 1960 takes away the basis of the 2014 judgment needs to be addressed by  the state. Besides, the Animal Welfare Board, the Federation of Indian Animal Protection Organisations (FIAPO) and Compassion Unlimited Plus Action (CUPA) filed the present petitions.”

The petitioners said this amendment is nothing but a surreptitious method of circumventing the law laid down by this court, without addressing the legal basis of the 2014 judgment banning Jallikattu. The amendment dated January 1, has amended various sections of the Prevention of Cruelty to Animals Act, 1960 and the conduct of Jallikattu is allowed and to be governed by the rules framed by the state of Tamil Nadu.

The petitioners pointed out that only the central government is vested with the power to frame rules and hence the rules framed under Section 3(2) of the Tamil Nadu Act are invalid and therefore inapplicable. It is clear that by bringing the amendment, the state of Tamil Nadu sought to overcome or circumvent the 2014 judgment. It was argued that a binding judgment cannot be rendered ineffective by the enactment of legislation that substantially overrules the intended effect of the judgment.

By bringing a law, the state is attempting to circumvent the protection from cruelty granted to bulls under the Prevention of Cruelty to Animals Act. The state amendment states that Jallikattu is vital to the preservation of the cultural and traditional practice in Tamil Nadu. Refuting this the petitioners contended that Jallikattu does not have any religious significance and in the opinion of this court, it was also not supported by Tamil tradition and culture.

The very basis of Jallikattu was found to be cruel and ultra vires the Prevention of Cruelty to Animals Act, 1960, and for the state of Tamil Nadu to now propose that the event takes place in order to ensure the preservation of bull species is absurd, arbitrary and not tenable.

The amendment does not change the fact that Jallikattu is still a form of entertainment or sport and as such falls foul of Section 11 of the PCA Act. It is therefore unconstitutional, illegal and invalid on the grounds that it directly contravenes central legislation in myriad ways, they argued and prayed for an interim stay of the law passed by the state till the disposal of the present petitions.