As Jallikattu Protest Rages on in Chennai, These Volunteers Make Sure It's 'Clean'

The group of volunteers, who first came together during the 2015 Chennai floods, are committed to keeping the environment clean.

Chennai: As the country stands divided in a historical ‘tradition vs animal rights’ debate over the Jallikattu ban in Tamil Nadu, there is another quiet revolution brewing, initiated by volunteers in Chennai and across the state.

As the protest at Marina beach runs into its third day, we see students and volunteers picking up garbage strewn across the beach. They collected it in bags and put them together for the municipality personnel. Vellore too saw a group of youngsters pick up garbage from the protest site. These well-educated youngsters did not think twice before getting their hands dirty (literally). D. Manigandan, a young entrepreneur from Vellore says, “It was such a proud moment to see the youngsters get to the streets to clean the mess, without a second thought. These guys have nothing in common, except the cause.”

For a protest that has no political or religious agenda – or for that matter, a single leader – it is quiet surprising to see the level of decorum that’s been maintained. From organising food and water packets, clearing traffic, to garbage collection – volunteer groups have taken up different roles even as they stay focussed on the job at hand.

Volunteers to the rescue 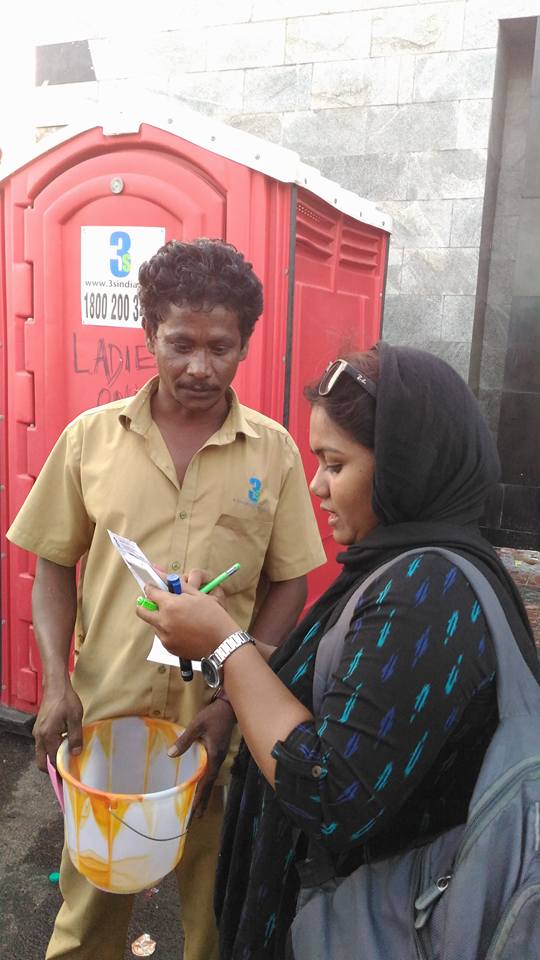 The mobile toilets that were installed on the site. Courtesy: Catherine Gilon

As more women and kids stormed into the protest, a lack of restrooms was noticed. But the volunteers acted swiftly and connected via Facebook. Within 24 hours, a bunch of mobile restrooms were installed (they were set up at night on January 18).

“Some of our core members are active participants of the peace protest (held in Marina). On Tuesday, early morning we heard from a female volunteer that the public toilets were not maintained well and that the access was shut down over the night. They had to literally fight to keep one of the restrooms open for ladies and children who were a part of overnight protest,” Deepa Rajagopal, one of the organisers, said.

“Mobile toilets are a common feature in the US (which is where I currently live), so it gave me the idea to look for one in Chennai. Thanks to Ms Divya Balachander, who quickly found a vendor and thanks to our generous sponsor Mr Nagarjuna who covered the whole cost. The whole process was smoothly handled and executed because of the core team – Kanimozhi Satyaseelan, Divya Balachander, Dilip Srinivasan, Rajesh Vattipalli, Anand Vaidyanathan (in no particular order),” she said. Rajagopal and her team are currently trying to source a disabled-friendly mobile toilet.

Srinivasan, another volunteer from the group said that a group worked through the night in Chennai to mobilise the restrooms.

Aged between 23-40 years, the group consists of students, businessmen, IT engineers and research scholars. So, how did they connect?

“It was the Chennai floods that brought us together. We started this Facebook page that connected volunteers from Chennai, Bengaluru, the US, for humanitarian work,” Srinivasan said. They did not stop with the flood relief work but instead chose to do cleanliness drives on a regular basis. “We have frequent cleanliness drives across the city, our main motto has been to create awareness for a clean city – including source segregation, no plastic campaigns  and lake cleanups,” he said. With such regular activities, these volunteers have now been automatically trained to handle mass campaigns. Even as plastic bottles and papers pile up, volunteers armed with gloves and garbage bags have just arrived to take the bull by its horns.

While campaigners continue to speak out in favour of Jallikattu, this conscious effort by this group of youngsters to make the protest a ‘clean’ one is definitely an example to emulate.

Catherine Gilon is an independent journalist who reports on sanitation, innovation and education.