What Explains the Indian Desire for Homogenisation?

The rise of the BJP and the RSS is merely a symptom, and not the cause, of the present political state of our nation.

Jayanta Ghosal’s article about the rise of Hindu chauvinism in Bengal, which came out in the Indian Express a few days ago, got me thinking about the changes that have been taking place in India for a while now.

I sent the article to someone, who asked me, “And what of Bengali sub-nationalism?” Is it dead? Does it still belong? Do people think it ought to still exist? Has modernity affected it at all? The answer is yes. It’s starting to die out, albeit with many caveats and conditions.

The essence of Ghosal’s article is that while Bengal has always been slightly disconnected from India, it’s starting to change. The desire for a strong India is prompting Bengalis to start accepting things that they have either ignored or avoided in the past.

Ghosal uses the example of the RSS and the BJP who have never had any traction in Bengal in the past. However, the bhadralok have now started to cede influence to the BJP. This could be a process of deliberate change being maliciously introduced by the BJP or simply a case of cultural assimilation. The author is gracious enough to promote neither a conspiracy nor diffusion.

For a lot of my friends, this is an alarming prospect. I confess it finds me a bit disquieted as well. The BJP is a force of nationalism, and frankly, more radical than I’m comfortable with. Yet it pays to think a bit about the process and introspect as well.

Why is this happening? Enough people are convinced that the Modi and Shah combination is toxic and insidious: the conspiracy theory stands on solid grounds in many people’s minds. Yet, I prefer to think of the BJP as a symptom, not a cause of the present political state of our nation.

Which brings me to an interesting point. What’s really happening in our country? Why has the BJP managed to gain a foothold in areas it previously had no clout in?

From separation to integration

India, or Hindustan, or Bharat, whatever you may choose to refer to her as, has always been a diverse land. There has been some homogeneity, what with most of the people being Hindus and derivatives of the same, but her cultural diversity is staggering. It has been noted that India is more diverse than Europe, with more languages to boot.

There are many reasons for this. The primary one – pointed out by both Professor Ian Morris of Stanford University and Professor John Darwin of Oxford University – is that it was difficult for any north Indian ruler to conquer a subcontinent crisscrossed by so many rivers, mountains, dense forests and jungles with his army only to gain very tangential benefits for it all.

Professor Darwin further notes that it was only during the Mughal era that India started to integrate. Construction of the Grand Trunk Road, for example, allowed an army to go from East to West much faster than before, and even then, the lack of connectivity allowed banditry to thrive between settlements.

This caused a large number of sub-cultures to be born out of a larger pot of Hinduism. Anyone east of the Indus was a Hindu as long as they called themselves one, goes the famous saying, but calling yourself a part of any particular subgroup of Hindus was always a tricky business. A Bihari Brahmin could not pass himself off as a Tamil, and would certainly not be accepted among Tamil Brahminhood. There was enough knowledge and connectivity among various sub-groups that while outsiders were not considered heretics, one’s nose would always wrinkle when one thought about their practices.

British colonialism, the independence movement, and a united Indian republic changed that for the first time in the country’s long history. Travelling from Kashmir to Kanyakumari was easier and faster than ever. Sachin Tendulkar was hailed as an idol all the way from Punjab to Assam. People may not understand his language, but everyone knows of Rajnikanth: his movies are even screened in Chandigarh, the capital of Punjab. Bangalore is a melting pot of all cultures; people from all around India study and work together there. The politics of Uttar Pradesh affect each and every one of us. Ambani’s proposal for Reliance Jio induced an entire nation to get addicted to mobile data. 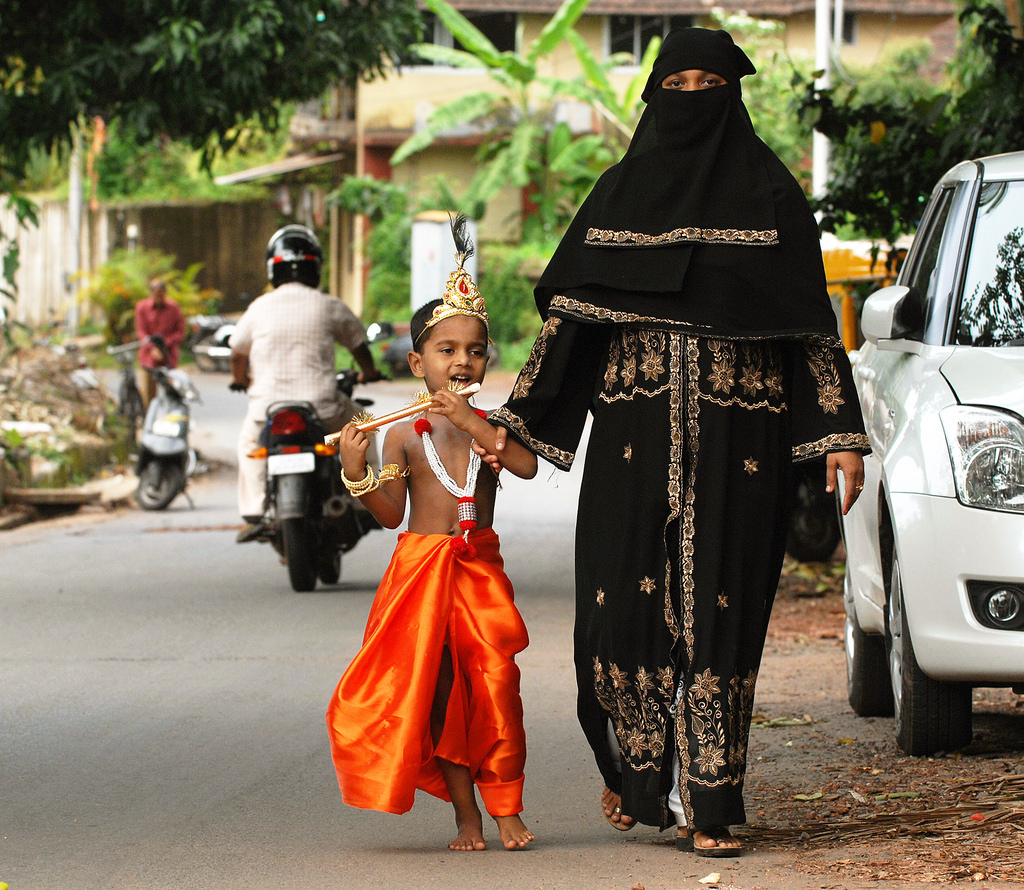 To cut a long story short, India is starting to homogenise. The older generations might scoff at this: they, their fathers, and their fathers’ fathers have never known anything but a diverse India. But few of them have studied in Bengal, worked in Karnataka, and retired in Punjab. Their worldviews are limited to their village, district and state.

But even as cultural differences remain – the division of Andhra Pradesh into Andhra and Telangana is a recent example – the tide has decisively shifted towards integration. The idea that Tamils would understand Hindi at some point would have been ludicrous a few generations ago.

Yet more and more Tamils are deciding to adopt a working knowledge of the language to be able to work in other parts of the country. Affinity for Bollywood and cricket, disdain for politicians’ stupidity and corruption and the drive to settle abroad, all unite, and not divide, India. Weddings are starting to embrace customs from other cultures and our acquaintance and acceptance of foreign cultures has increased.

Also Read: Cultures of Liberalisation: Between Raj and Raja of the 1990s

In addition, the economic integration of India means that sub-nationalism provides fewer and fewer benefits. Indeed, the benefits of belonging in a larger community of states have become more apparent as separatist and support for sub-nationalistic issues is stalling. The economic pros of being in a union far outweigh the cons of striking out alone.

A very pertinent example is of Great Britain. The current economic heavyweights of this age are China, the US and the EU. Britain, as it is now learning, is a very large minnow in a sea dominated by sharks, with reference to the size of its economy in comparison with the economic powers of today. A similar sentiment is starting to grow in India. The economic benefits of being in the union are becoming evident.

How is the BJP harnessing this sentiment?

Unlike all the other forces in India, the BJP and the RSS explicitly identify themselves as a homogenising force. Hindutva aims to abolish the differences between different sects, creeds and beliefs. It is not an ideology I agree with: dispensing opinions on the matter, it is a reformation ideology. It wishes to create a single truth which Hinduism adheres to. In doing so, it aims to bring back glories of a fabled past, when India was the golden bird, the pride of the world and the jewel of Asia. Unlike other reformist ideologies, Hindutva is militaristic. It aims to spread, often by force.

Such a thing would have been impossible in the past. Despite the reach of Ashoka’s edicts, India remained rooted in various sects of Hinduism. Despite numerous efforts by countless Muslim rulers, India remains staunchly Hindu.

However, the advent of the railways, air travel, the internet and mass communication means that the diversity we pride ourselves in, is under siege from within. One of the besiegers is the Hindu nationalist right. Unfortunately, it might be the only organised one. The BJP might be wrong, fascist and abhorrent, but it is successfully making hay while the sun shines.

Also Read: I Cannot Accept Hindutva Because I Am a Hindu

For those who feel dismayed, this isn’t a phenomenon one can prepare for by looking at the past. The BJP is crafting a universal myth to appeal to a broad swath of India. The myth is the universality of religion and our shared cultural roots. The Muslim is the great other, opposition to whom unites the rest of the country. In essence, the great unifier is religion, whereas in the past it used to be language, shared history or adherence to a particular sect or God.

In fact if one does want to oppose the BJP, one needs to understand the nature of this change. More and more people want similar things. Roti, kapda and makaan might be the rallying cry of the old guard and a good deal of India, but it’s stopped appealing to people as a political slogan. Secularism, that great embrace of diversity, merely keeps one on the back foot. Sure, it’s a fine ideology to espouse, but tolerance of diversity ought not to be orthogonal to understanding the nature of the change flowing through India.

Linguistic chauvinism, casteism, and other ‘isms’ are all taking a backseat for the Indian who understands that he wishes to become financially secure and professionally successful. If one were to successfully harness this as the fulcrum of a new ideology, one might be able to yet wrest the future away from the hands of Hindutva.

Savyasachee Jha is a PhD student at the Centre for Biosystems Science and Engineering, IISc, Bangalore