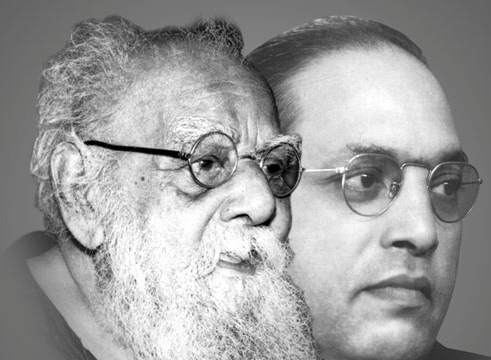 On 22 May 2015, the Indian Institute of Technology, Madras (IITM), one of the country’s leading academic institutions, ‘derecognised’ a student group that had been organising discussions on campus that took a critical view of the Narendra Modi government’s policies on a number of issues.

IITM’s decision to ban the Ambedkar-Periyar Study Circle (APSC) followed the receipt of a letter from the Ministry of Human Resource Development in New Delhi which forwarded an anonymous complaint against the student group and asked that the “comments of the institute” on the complaint “may please be sent to the ministry at an early date.”

One week after receiving the letter, and without giving the student group a chance to explain itself, IITM informed the APSC that it had been ‘derecognised’.

In a statement circulated Friday afternoon by  a fan group of HRD minister Smriti Z. Irani  on Twitter, the IIT Madras spokesperson said the student group had been temporarily derecognised “pending their presenting their stand to the Board of Students”, which “consists of all elected student representatives.” The spokesperson said the group had violated guidelines issued by the Board, without mentioning specifics. The following is an edited version of the statement issues by the Ambedkar- Periyar Study Circle (APSC) regarding the banning of the group by IIT Madras authorities:

We, the Ambedkar-Periyar Study Circle (APSC), an independent student body of IIT Madras (IITM) have been derecognised by the Dean of Students (DoS), on 22 May 2015, who stated that we have misused the privileges given by IITM. We were later informed that this move is based on a letter from the Union Ministry of Human Resource Development.

The Ambedkar-Periyar Study Circle was created as an independent student body on 14 April 2014 by a group of students from IITM to promote Ambedkar-Periyar thoughts and to initiate debates on socio-economic, political and cultural [issues] which affect the common mass within the academic fraternity… IITM has a long history of being a platform for right-wing groups alone to propagate their own ideology and train young minds for their intellectual wings through the Vivekananda Study Circle, RSS shakha, etc…

In the past one year, we organised hall meets, movie screenings and pamphlet distribution among students and ignited debates on issues like: agriculture under threat, Coal bed Methane, GM crops and their impact on agriculture, the Industrial Disputes Act amendment, language politics in India – past and present-  based on the Sanskrit week celebrations, the MHRD’s overt attempt to have a separate vegetarian mess halls in IITs and IIMs, and the IITM administration’s move in replacing the name board of the faculties and laboratories with Sanskritised Hindi. We celebrated the birthdays of Bhagat Singh and Ambedkar and organised talks on understanding Bhagat Singh and the contemporary relevance of Dr. Ambedkar.

Through the platform, we created a space for the students of IITM to discuss and debate issues directly affecting peasants, workers and the common masses. The APSC continuously faced threats from right-wing groups inside IITM. Even the administration tried to curtail our activities. In June 2014, the Dean of Students, Dr.M.S.Sivakumar directed us to change our name, stating that the names ‘Ambedkar and Periyar’ are politically motivated and thus the study circle should be renamed with some apolitical titles without any personality’s name. The APSC decided to stick with the same name. We also pointed to the activities of right wing groups under the banner of the Vivekananda Study Circle, but the Dean of Students (DoS) said they have been using this name for many years. For a second time, in September 2014, he sent a mail for the same reason stating that the name is polarising the students. We clearly explained to him the motto of the study circle and the relevance of Ambedkar and Periyar’s names.

In this scenario, the APSC celebrated Ambedkar’s birth anniversary and its own first anniversary in April 2015 by organising a talk on the “contemporary relevance of Dr. Ambedkar”. Pamphlets were issued on how communalism and corporatism are two sides of a single coin which is tossed by the present government against the common people. The pamphlet’s contents were drawn from leading magazines, newspapers, and the writings of Ambedkar.

After this event, on 22 May, we received mail from the DoS stating that “because of the misuse of the privileges” given to your study circle as an independent student body, your student body “is de-recognised by the institute.” However, his mail did not contain any details regarding the privileges misused by the APSC.

When we met the DoS, he gave us a letter from the MHRD with the subject matter

and which forwarded a copy of the complaint sent anonymously by [right-wing] in IIT. The complaint letter – as mentioned by the MHRD official – states that the “APSC is trying to de-align the ST, SC students and trying to make them to protest against MHRD and Central government and trying to create hatred against honorable prime minister and Hindus”. Based on this complaint and the MHRD letter, the Dean of Students charged the APSC with misusing  the privileges given them and derecognised APSC.

We resent the fact that the DoS has derecognised our study circle unilaterally without giving us a fair hearing and an opportunity to represent ourselves. In our face-to-face interaction with the Dean of Students, we have been told that our study circle engages in “controversial activities” and violated the code of conduct of independent student bodies. We are clear on the stand that we have not misused any privileges given by the institute. So far, our activities have involved healthy discussion on socio-economic issues on a scientific basis to promote the scientific temper among the students, which is allowed by the Indian Constitution. We have not been given a satisfactory definition of what entails “controversial”.

Further, we were asked to give assurances that we shall desist from such activities in the future before the Dean can allow us to restart our activities. We have also been asked to route all our activities through the Dean’s office rather than the usual practice of routing all our discussions, plan of activities and pamphlets through our faculty adviser. This excessive scrutiny is unprecedented and does not apply to any other students’ organisation. This clearly shows that only opinions put forth by the right-wing groups will get consent to see the light of the day, while the voices and opinion of democratic students like us will be curtailed hereafter.

Our discussions, meetings and pamphlets are meant to kickstart a discussion within the campus among the academic fraternity. The issues that we discuss are very important and define the way we live our lives. IITM is a publicly funded higher education institute, whose vision and mission should contribute to the upliftment of the common masses, who are the taxpayers. Rather, the move from DoS, IITM says there is no space for such opinions and discussions.

We strongly believe that what we stated in our pamphlets and in the content of our discussions is correct as per the Constitution. Therefore, action against the Ambedkar-Periyar Study Circle by the DoS, IITM is undemocratic and unilateral and against the interest of the common mass for whom the Institute itself is indebted; hence we are not accepting this decision taken by the Institute.

Voltaire said,  “I do not agree with what you have to say, but I’ll defend to the death your right to say it.” We need a democratic space within the academic fraternity to debate matters that affect the common mass. Note: This story has been edited to add a reference to a statement issued by the IIT Madras spokesperson on the controversy on Friday afternoon, and to upload a copy of that statement.