How Ignorant Enforcers Are Trampling Over India's Artistic, Cultural and Religious Traditions

Will Hindutva erase the eclectic, liberal and uninhibited legacy of Hinduism? 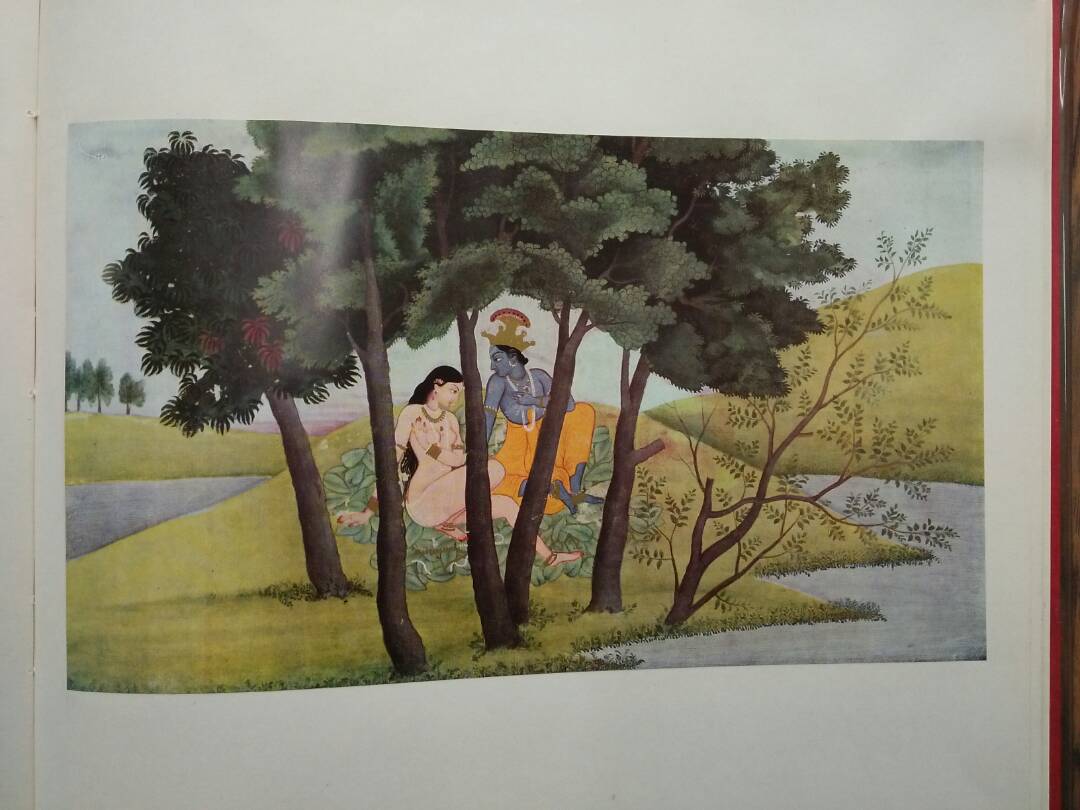 We are living in very strange and very dark times. Majoritarian communalism masquerading as nationalism is trying to impose its ideological hegemony and browbeat others into submission. And, perhaps for the first time, the punitive and coercive powers of the state are being made use of on such a wide scale. Organisations and individuals allied to the Sangh parivar are filing FIRs indiscriminately to trap their opponents in legal proceedings that – as they well know – can go on for years if not decades and are extremely tiresome. Of course, the record of the supposedly secular Congress in fighting such trends has not only been very disappointing but, in a large number of cases, also one of collaboration. When M.F. Husain, India’s most celebrated artist, was slapped with scores of court cases in various towns of the country, the Congress did nothing to help him. In his old age, Husain was forced to leave India and he died in London, away from his beloved country.

Whenever Sangh parivar activists file FIRs against their political opponents, the police show unusual alacrity in acting on their complaints. Gaurakshaks are beating up people black and blue and the police arrest the victims. Anti-Romeo squads are forcibly entering people’s homes and roughing them up, but the police are turning a blind eye. In the name of some mythical Indian culture, these activists and their leaders want to determine what people can eat, wear, read, write or see. As most of these enforcers are blissfully unaware of their own cultural, literary and even religious traditions, they do not realise the great damage their actions are causing to those very traditions.

However, as they have proved time and again, the Hindutva proponents will have nothing of it. They are bent upon launching a witch-hunt against anything which does not conform to their limited understanding. Recently, an example of how people are being harassed by the Hindutva activists because of this ignorance has come to light in Rahatgarh, a small town located at a distance of 30 kilometres from Sagar in Madhya Pradesh.

On April 4, Rahul Jain, popularly known as Rahul Bhaiji, shared on his Facebook wall a painting posted by one of his Facebook friends.

The well-known 18th century painting, most likely from the Guler or Kangra school of Himachal Pradesh depicts Krishna and Radha in an amorous embrace and was sold by the auction house,  Christies, in New York in 2013 for $207,500.

This prompted Krishnakant Tiwari, who worked for the BJP’s IT Cell, to lodge a complaint with the local police. The state’s home minister Bhupendra Singh Thakkur used to be an MLA from this area. Some behind-the-scene moves must have been made because the complaint was converted into an FIR after 10 days. Non-bailable offences under sections 153(A) and 295(A) of the Indian Penal Code (promoting enmity and hatred towards a religion) and section 67 of the Information Technology Act (publishing of information which is obscene in electronic form) were slapped on Rahul Bhaiji, who happens to be a leader of the Communist Party of India and a former national president of the All India Students Federation. To avoid arrest, he has gone underground.

This is how Christies described the painting in its catalogue:

An illustration from the Gita Govinda
Master of the first generation after Nainsukh
India, Guler or Kangra, 1775-80
Krishna and Radha intimately entwined in a bower of leaves by a calm stream in the dusk of night, both still wearing their jewelry and he his crown and white floral garland, surrounded by trees and creepers providing gentle seclusion and mirroring their tender lovemaking
Opaque pigments and gold on paper
6 5/8 x 5 7/8 in. (16.8 x 15 cm.)

On his part, the BJP complainant, Tiwari, has taken to Facebook to describe the painting in some detail, in an attempt to convince his audience about the hurt that Rahul Jain had allegedly caused to Hindu religious sentiments by sharing it. Not only this, he issued a call for Hindus to come together to oppose people like Rahul Jain. Though he openly incited people from the Hindu community on a religious basis, in the eyes of the police, it was not he but Jain who had to be acted against.

A virtually  identical painting is part of the permanent collection of the Philadelphia Museum of Art. According to the museum’s notes on the work:

Over 35 paintings from this Gita Govinda series have been published, but, according to W. G. Archer, who linked it with a numbered set of drawings in the National Museum, New Delhi, the original likely contained over 150 images. Archer himself speculated that the set may have been the work of Khushala (Manaku’s younger son; see Philadelphia Museum of Art, 2004-149-77) and Gaudhu (Nainsukh’s second son). While this is difficult to substantiate, the paintings do clearly relate to the workshop-lineage of Pandit Seu, Nainsukh, and Manaku. B.N. Goswamy believes that the planning and preliminary sketches for this set, or at least many of them, were actually done by the master Nainsukh himself in the last decade of his life (see Philadelphia Museum of Art, 2004-149-71). He does not, however, attempt to designate an individual hand for the completed paintings, attributing them generally to the workshop and a “master of the first generation after Nainsukh,” active about 1775–80.Vishwa Chander Ohri also attributes the set to painters working in Guler but dates it slightly earlier, to c. 1760–65.

Closer home, similar paintings of Krishna and Radha form part of M. S. Randhawa’s classic book Kangra Paintings on Gita Govinda, first published by the National Museum in 1963, reprinted as recently as 2010, and still on sale at the museum. 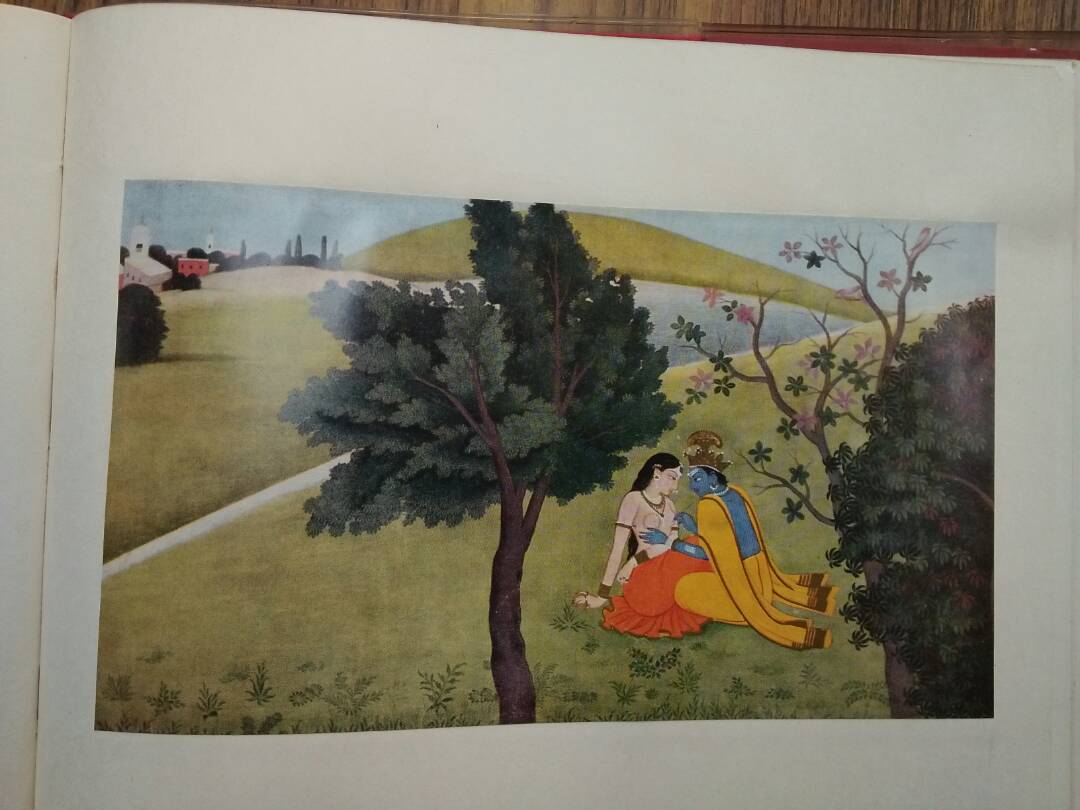 Randhawa describes this painting under the heading “Love Play of Radha and Krishna” and informs the reader that it is based on an ashtapadi from Canto XII of the Gita Govinda. Its translation, given by Randhawa, is as follows:

“Radha, preparing to array herself, before the company of the gopis could see her confusion, spoke thus with exultation to her obsequious lover: “Paint, O Krishna, with fingers cooler than sandal-wood, leaves and flowers with musk on his breast, which resembles a vase of consecrated water, crowned with fresh leaves, and fixed near a vernal bower, to propitiate the God of Love.” 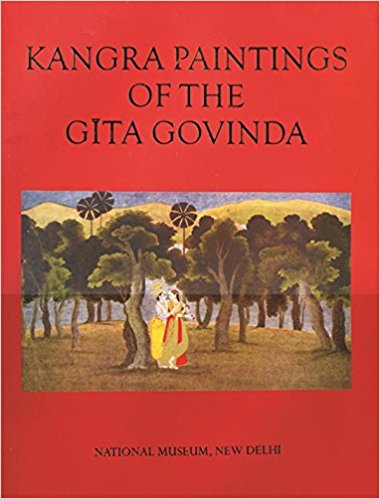 Kangra Paintings of the Gita Govinda
National Museum of India

A second painting (top of the page) is also based on an ashtapadi from Canto XII. Randhawa describes it in the following words:

“In the morning she rose disarrayed, her eyes betrayed a night without slumber; her bosom had nail-marks, her lips were crimson from a rain of kisses, her hair was disarranged, her sari and her girdle had slipped….The yellow-robed God, who gazed on her with joy, thus meditated on her charms in his heavenly mind: “Though her tress-knot is loosened, her cheeks perspiring, the lustre of her lips faded, her necklace of pearls dimmed in beauty by her jar-shaped breasts, and though she hides their place with her hands, looking towards me with modesty, yet even thus disarrayed, she fills me with ecstatic delight.”

Jayadeva describes the delightful dance of love of Krishna with all the gopis in the dark forest of Vrindavan. All the gopis surround him, embracing him with joy, and caress him passionately. He in turn praises them, hugging one, kissing another passionately, glancing at another and smiling at other maidens in love.

In the Ashtam Sarg or Canto VII of Kumarsambhavam, Kalidasa offers graphic descriptions of sexual play between Shiva and Parvati in the course of which Shiva makes Parvati drink liquor too. Even our two epics – the Ramayana and the Mahabharata – do not display any squeamishness regarding sex. However, it is too much to expect that those who have formed violent Hindutva vigilante groups would be familiar with our ancient religious, literary and artistic traditions.

When Europe experienced the Renaissance, great works of art were created that drew inspiration from Greek heritage. The Vatican was adorned with nude statues and frescos and so were prominent cities of Italy. However, when the Protestant Reformation took place, censorious tendencies took over and fig leaves were attached to nudes and frescos were clothed. Does the same fate await our temples of Khajuraho and Konark? Will Hindutva erase the eclectic, liberal and uninhibited legacy of Hinduism? Only time will tell.