Humans of Hindutva: My Experiments With Community Standards – of Facebook and Outside

It seems Facebook is increasingly becoming a platform for people who wish to divide people, and not for those who ridicule these divisive tactics. 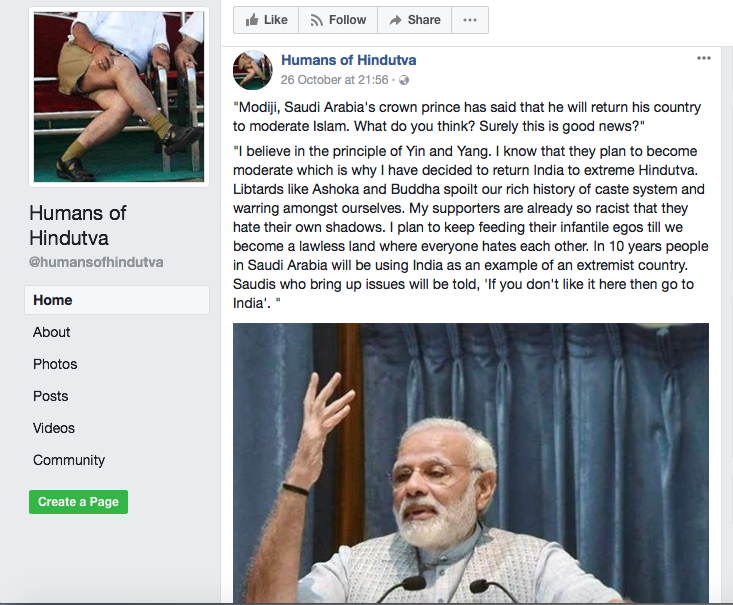 Note: This piece was originally published on October 29, 2017. The Wire is republishing it in light of the administrator’s decision to take down ‘Humans of Hindutva’ Facebook page.

As the admin of a little known Facebook page Humans of Hindutva (HOH), I’m having a most curious year. It seems only yesterday I stumbled home drunk after a heated exchange with a nationalist friend and decided to create a public page to frame his absurd (to me) arguments. Even in my stupor that night, I had the foresight to keep my identity hidden. For some reason, my chosen format, which I lifted from the very popular Humans of New York (HONY), found currency with some people and picked momentum almost instantaneously.

Fast forward to now – six months later – and I’m beginning to see how deep the rabbit hole of social media goes. I have received so many death threats that I have lost count. I have had so many strangers abuse my family that it doesn’t even rattle me anymore. I have had several people threaten to take me to court or file an FIR. All this for the simple crime of running a satirical page which takes pot shots at Hindutva (not Hinduism) and the politicians who cater to it.

Documentary filmmaker Michael Moore once said, “You can’t debate satire. Either you get it or you don’t”. Unfortunately, doing political satire is difficult in India because most Indians would rather get offended than ‘get it’. Also, since every political party is equally incompetent, asking for accountability on any issue quickly descends into whataboutery. People have a misconception that just because I write against Hindutva, I must support Muslim extremists. They think that because I criticise the Bharatiya Janata Party, I must be a Congress supporter or a Leftist. They think I must be getting paid to do this or must be jobless because according to them, there is no way that one could dedicate so much time to something without expecting anything in return.

Let me clear the air a little. I haven’t made a single rupee in the last six months running this page. I didn’t bother monetising it because it could leave a trail and jeopardise my anonymity. Besides, I run my own business which pays me enough to have a clear conscience. Also, I don’t spend too much time on the page. Writing 500-odd words a day is not so difficult when you know exactly what you want to say. Sure, at times it’s hard to find the time to write as I juggle my work life, family commitments and social obligations but when you do something daily for a while, it becomes a part of your routine. I write when I’m stuck in traffic, when I’m at a doctor’s waiting room, when I’m early for a meeting or waiting for a friend at a bar. These brief windows of time provide me just enough opportunity to put down what I want in a stream-of-consciousness (although my short posts are more of a puddle than a stream). My point is that if you want to do something, then you will always find the time for it…even if it doesn’t make you any money.

As for political affiliations, I have said multiple times that my only intention or agenda in running HOH is to make my message of humanism reach as many people as possible. I don’t think any political party is without blemishes, but I do think some ideas are more defendable than others. As a patriot, I stand by only one holy book: our constitution, which had the foresight and wisdom to see all Indians as equal. 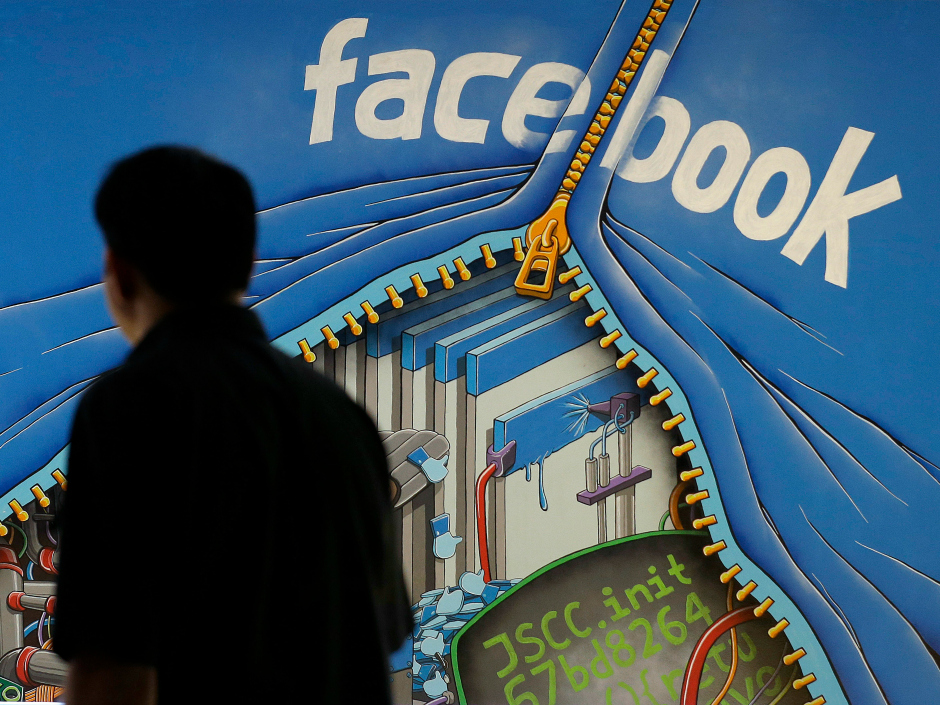 While I can’t expect Facebook’s algorithm to get this and cut me some slack over the mass reporting of my page, I can only hope that someone working at Facebook reads this and understands my true intentions. Credit: Reuters

It is proving difficult for me to truly express myself because Facebook’s algorithm can’t tell my (admittedly poor) satire from the extreme views that my posts satirise in the first place. There is an adage on internet culture called Poe’s Law which states that “without a clear indicator of the author’s intent, it is impossible to create a parody of extreme views so obviously exaggerated that it cannot be mistaken by some readers or viewers as a sincere expression of the parodied views”. I am a victim of Poe’s Law because until I mark each post as ‘satire’, people are going to keep mistaking my over-the-top persona for the real thing and report me for assumed transgression. But where’s the fun in that? That would be akin to those terrible sitcoms which have a fake laughter track telling the viewers when to laugh.

My posts only mimic the views held by actual nationalists and exaggerate their actual statements. While I can’t expect Facebook’s algorithm to get this and cut me some slack over the mass reporting of my page, I can only hope that someone working at Facebook reads this and understands my true intentions. I value human lives over any political cause. I love India, but I realise that my country suffers from social ills and the government is answerable to every Indian citizen, no matter what their religion, caste, gender or financial status. The people I parody think the opposite. 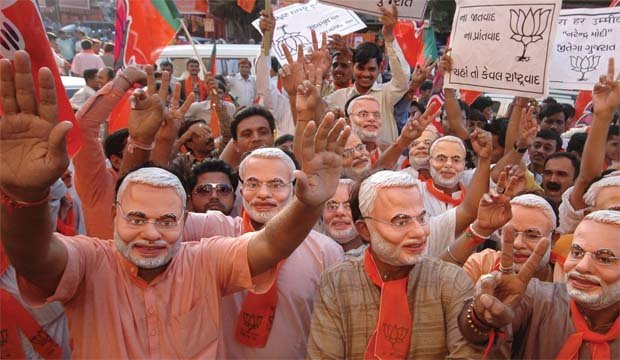 Something that the right-wing is convinced of is that the Left is full of elites who only pretend to care for the marginalised as a ‘virtue signal’. Credit: Facebook/Humans of Hindutva

If the Congress or the Left had similar disdain for the constitution, I would take aim at them too. Something that the right-wing is convinced of is that the Left is full of elites who only pretend to care for the marginalised as a ‘virtue signal’. They may be right (to some degree) but the problem with this postulation is that one’s true intentions are always intangible. We could argue till the cows come home over whether the people holding a #NotInMyName placard really practice what they preach because there is no way to measure their dedication to the cause. On the other hand, what we see with most Hindu nationalists is not intangible but palpable. Lynchings, hate speech, death and rape threats are physical manifestations of one’s innermost thoughts. There can be no disputing it because the evidence is not an assumption anymore, but an action. It’s the difference between saying ‘liberals probably don’t even give a shit about the poor’ and actually writing an article on your nationalist website which suggests that the poor should be culled. It’s the difference between saying ‘all men are probably abusive and violent’ and actually following an abusive and violent man on Twitter.

I’m aware that what I put out is unpalatable to some (that’s the whole point), but I only wish people realise that nothing I say comes from a place of malice. Go through the comment section on my page and compare it to any nationalist page and you’ll easily be able to tell which one is promoting hatred. I have never said anything racist or sexist or hurt any religious sentiments. I challenge anyone to prove otherwise. I have never created a backup page because I don’t think anyone will find what I say objectionable if they read between the lines.

Recently, Facebook removed a post of mine titled ‘Take a ride on India’s bullet train’ which set the photographs of a number of Indians who were shot down for voicing their opinion (such as Mahatma Gandhi, Gauri Lankesh, M.M. Kalburgi, Govind Pansare and Narendra Dabholkar) on a bullet. I thought the underlying message was clear, which is why it was widely shared. As much as I was confused as to why Facebook removed this post, especially since it didn’t mention any guilty party, what I found troubling was when Facebook warned me that if I continue to post objectionable content, I may be asked to reveal my identity. 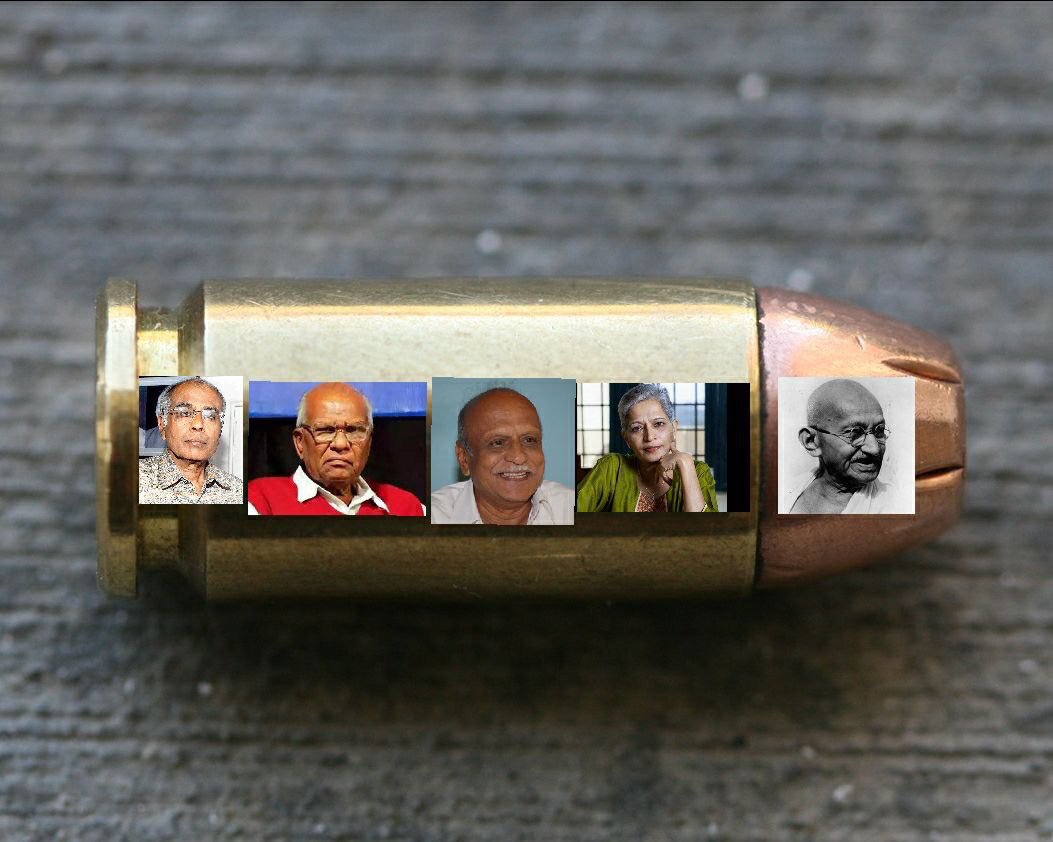 A post that had photographs of Indians who were shot down for voicing their opinion on a bullet on the Facebook page ‘Humans of Hindutva’ was taken down. Credit: Twitter/Denzil Smith

I found this confusing because every time Facebook has banned me or removed a post, they have issued an apology and reinstated the posts when they couldn’t find any objectionable content. I have received these warning so many times on account of mass reporting that I perpetually feel that I’m walking on thin ice. It was on receiving one such warning that I decided to quit a while back. It’s almost as if Facebook’s system is logging me a repeat offender when, going by their apologies, I’m within the guidelines set by them. This is why I am struggling to understand Facebook’s Community Standards. The fact that many people write to tell me that they don’t see my posts on their newsfeed is an entirely different issue.

What Facebook needs to realise is that, in a country where journalists either pay lip service to the government or get sued or shot down, theirs is a crucial medium for many Indians to voice their opinions. It seems Facebook is increasingly becoming a platform for people who wish to divide people, and not for those who ridicule these divisive tactics.

Also read: Name-Place-Animal-Thing: What Does Facebook Owe Its Users?

As much as I appreciate Facebook for giving me a voice and an audience, I think it’s time to evolve. I have decided to launch a website dedicated to fake news (I can’t share the details yet because I’m still putting the finishing touches and securing it completely). I aim to channel any advertisement revenue to dedicated charitable organisations so I can put my money where my mouth is. I will be accepting contributions this time around and hope that the people of India join me in spreading some heartfelt misinformation. I have a long way to go in order to catch up with some of the dedicated IT cells out there, but I promise you it is going to be fun because this time Community Standards won’t be holding us back. This time we make the community and its standards.