How the Camera Has Changed the Dynamics of the Classroom

From concerns about surveillance to the blurring of spaces, it is evident now that the virus has changed more than our physiologies. A video conference on a laptop. Photo: Gabriel Benois/Unsplash

Over the past year of online teaching, instructors and students have struggled, not just with the digital divide but with a tense binary: online classroom work versus privacy violation.

A recent study from Cornell published in the journal Academic Practice in Ecology and Evolution found that some students felt it was a violation of privacy (because their personal settings, their homes and family were visible), possible distraction when watching others on screen, self-consciousness, among others. Class, race, ethnicity and appearance were factors in their reluctance, the study found. Another report by Margaret Finders and Joaquin Muñoz, deemed the practice of asking students to turn on the cameras to be a form of surveillance. (Although it seems odd that for a generation of Instagrammers and Facebookers, the camera, of all things, is a source of anxiety!)

Instructors cited in these and other studies agreed that the loss of visual cues from the students derailed the teacher’s mode of talking. When teaching, teachers (those who pay attention, that is) record puzzlement, annoyance, boredom, indifference in their students and seek to calibrate their talk in order to engage with them. The camera in the online classroom is not a surveillance camera per se (in any case several schools and colleges have surveillance cameras today), but is enmeshed in and continues through technological means the surveillance system that all classrooms are. The classroom is a surveillance assemblage now more than ever.

In the age of Body Dissatisfaction Indexes and a plethora of appearance-based anxieties, which are also gendered, raced and classed, to be on camera ‘as is where is’ without ‘prepar[ing] a face to meet the faces that you meet’ (to adapt T.S. Eliot), by asking for a visual of the student/s appears to function as one more instance of the social emphasis on appearance and the valorisation of select appearances. In the era of face-to-face classes too, this has been a concern. But the difference is: when on screen in a group of 40+ fellow students, it is impossible to ascertain who has pinned you to her/his screen or is staring at your appearance. This facilitates, more than before, a context for stalking, just as we remain ignorant as to who watches the CCTV footage. This unobtrusive surveillance is not top-down, but a sousveillance, surveillance perpetuated at the ground level. Surveillance ‘involves assorted forms of monitoring, typically for the ultimate purpose of intervening in the world’, as Haggerty and Samatas note. The exact nature of this intervention in the online class is something we are not yet clear about.

The classroom while rarefied and disconnected from the worlds of one’s home and family, has been replaced by the home-as-classroom (until one learns to blur the background). The family and other household members likely replace classmates in terms of proximity and visibility on screen. This alteration of the quality of the space of interaction blurs the boundaries of family and classmates, the personal and the social. The dynamics of the classroom, now online, are accompanied by the dynamics of the homestead. The blurring of the spaces is a matter of concern as well, since the entire idea of ‘going away to college’ was predicated upon the space of classes being distinct from the space of the personal.

Finally, the camera and montages of screenshots taken during online classes present, literally, the counternarrative to accounts of ‘successful’ online classes submitted in the form of formal reports being submitted to the Ministry, the UGC and other agencies that ‘regulate’ higher education in India. While most HEIs provided statistics on how many students attended online classes, the percentage of girl students among them and such, this counternarrative of compiled photographs, screenshots and other materials offer us an insight into what and how the online space has operated for pedagogic purposes. This is an additional feature of the surveillance assemblage. 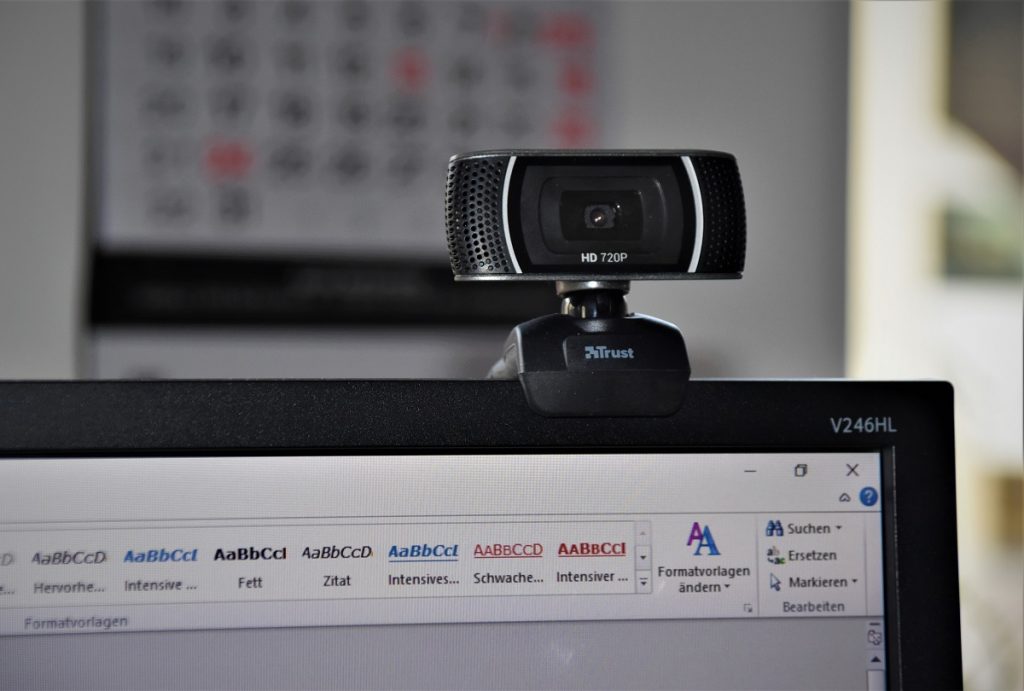 Representative image of a webcam. Photo: Waldemar Brandt on Unsplash

The classroom has been rendered a cinematic space. That is, the classroom now follows the logic of cinema rather than the logic of the face-to-face class. In the previous era, the classroom had a specific spatial arrangement for teacher and student. In the current classroom as cinematic space, all participants are arranged as a series of thumbnails on a flatscreen. The teacher’s angles – walking about, turning to the board – are now constrained by the range of the camera’s movements. The practices of teaching become surveillant, and surveillance itself is woven into the very practice of teaching – all on screen.

The previous experience of the classroom which produced a certain subjectivity has now been replaced by a surveillance subjectivity: students are surveillance subjects in cinematic space. Drawn into the logic of cinema, we find a wholly different order of technologically determined subjectivity for teachers and students. The cultural technology, which determined subjectivity through the ordering of bodies in seating arrangements, time tables, the lectern, the roll call, among others, continues to focus on the human body, albeit through the camera’s eye.

“The cinematic apparatus can be considered as a cultural technology for the discipline and management of the human body, and . . . the long history of bodily analysis in medicine and science is critically tied to the history of the development of the cinema as a popular cultural institution and a technological apparatus.”

Following Cartwright, it is possible to argue that the camera-in-the-classroom as extending the disciplining of the human body into the space of the family and home due to the breakdown of the personal and the social. This is candid camera writ large.

The realism of the camera-classroom is accentuated by the recording of the class in progress and other notable signs. With frequent interjections like ‘am I audible?’ ‘can you hear me?’ or the hand icon to attract attention, the signifier is produced by the real flesh-and-blood person/signified. This instantiates an ‘indexical realism’, a term used by Catherine Zimmer in her book on Surveillance Cinema: the sign announces the corporeal, ontological presence or subject that is the student/teacher.

In the cinematic space of the classroom, surveillance continues to function as a mode of social sorting (as David Lyon defined surveillance) and governance, which was manifest in the earlier face-to-face classroom as well. Legitimate and illicit acts are recorded on camera now. It also facilitates the silent recording of information – chats, messages, etc – for some purpose. And it could be used for the legislation of behaviour, and therefore functions as a system of governance.

By consigning the events of the classroom to recordings and therefore to memory, a whole new level of interaction has been inaugurated as well. A social memory begins to take shape in and through the screen. More than ever now, with online classwork, we perform a self for the benefit of mutual surveillance.

The classroom as a cinematic space is, then, at once, a surveillance structure even without the camera being switched on by students. It now follows the narrative logic of cinema, with representations, interventions, sound, the fourth wall (in some cases). The classroom as cinematic space also provides not just a representation of the class, but is a material witness – I invoke Susan Schuppli’s concept – to online work. That is, the nonhuman entity, such as the screen, the chat, the connectivity, the signs used in the virtual classroom, are evidentiary ‘texts’, marked by the participants and their interactions. Unlike the classroom – if we discount the graffiti on desks and walls – the online classroom provides the intersection of matter (the monitor, the camera) with the discourse (verbal speech acts) as never before.

How the ‘camera on’ structure of online teaching will influence new forms of subjectivity remains to be seen, of course, since it is too early in the game. That said, forms of interaction that constitute the social self or cultural memory are changing with the new pedagogies in place.

A virus has changed more than our physiologies.