Game of Thrones Holds Many Lessons for Climate Justice Movements

Game of Thrones provides us with more sharp parallels to climate change than what meets the eye.

The most popular TV show of all time, Game of Thrones, has been interpreted by many as an allegory for the existential threat posed by fossil fuel-driven ecological breakdown. While we must band together to address the common threat of ecological breakdown, characters in Game of Thrones must reckon with the mysterious and deadly White Walkers and their frozen Army of the Dead.

The show tells a familiar story about how the urge to keep playing the “game of thrones” remains strong even in the face of impending doom. But the way in which the story unfolds reveals more parallels than are immediately obvious. If you look, it’s easy to see: Game of Thrones holds many lessons for climate justice movements around the world.

The night is dark and full of terrors

Like the Westerosi, we are living through a mass extinction event, the gravity of which, most of us don’t really appreciate. Concerns on Earth are more about heat than cold — there’s a 95% chance that average global temperatures rise 2°C by 2100  –  but just as in Game of Thrones, the crises enveloping our world can be heard as a song of ice and fire.

Droughts have combined with heat waves, leading to out-of-control wildfires in locations as unlikely as Greenland. Permafrost is no longer permanent: in Siberia, summer heatwaves are thawing the tundra, leading to explosions of methane bubbles big enough to rival Cersei’s dragonfire bombing of the Sept.

The Sept of Baelor blast took out a lot of people, but if the carbon bomb under the permafrost goes off we are all screwed. Permafrost is thought to contain about twice as much carbon as is currently in the atmosphere. Watching it thaw is genuine torture. 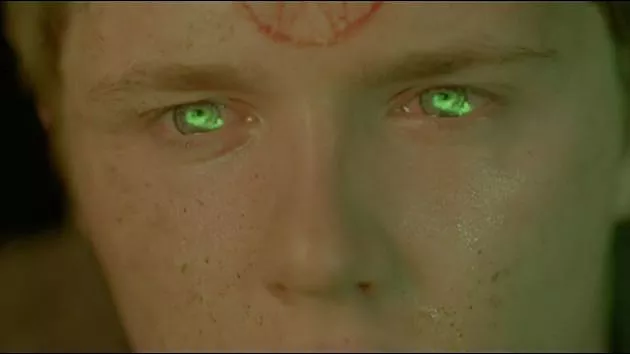 Lancel Lannister, having a ‘mare.

Big bubbles of gas aren’t the only thing lurking in what’s left of our icy north. In 2016, anthrax returned to Siberia after a dead reindeer thawed, releasing its zombie disease into an unsuspecting village. The night is certainly dark and full of terrors.

Everybody knows winter is coming. The Starks have been beating their drums about it forever. It’s literally their motto. Yet nobody seems to care. Sound familiar?

The challenge in both our world and Game of Thrones is that existential threats don’t automatically unite the realms behind a common cause. Especially when said threats are seen to be far-off, either temporally or geographically. Naive notions that logic would prevail doomed both Jon Snow’s and liberalism’s approach to communicating the problem.

For some, seeing is believing and it is enough. But not for everybody, and certainly not for the likes of Cersei. Jon and friends go to extraordinary lengths to secure proof that the threat is real in the hope that this will convince Cersei to abandon her agenda and call a truce. In a better world, it would. But neither we nor Jon live in that world.

Also Read: The Subtle Seduction of the ‘Warm’ in Global Warming

In Westeros, as on Earth, the existential threat isn’t a future problem. It is a now problem which is already claiming lives. They just happen to be the wrong kind of lives. North of Westeros’ border ice-wall the various Wilding peoples have been forced to abandon their homelands. In our inequitable world, poor, racialised people already fleeing the impacts of devastating extreme weather and climate change are also met largely with indifference and inaction.

Those in the centres of power in both worlds are as unmoved by faraway destruction as they are by the suffering of the people at their feet — be that in Fleabottom or the left-behind places of the industrialised world. We would do well to remember that there’s no point appealing to the better natures of the Cersei Lannisters of this world.

Chaos is a ladder

Cersei isn’t the only one who sees opportunity in crisis. The late, great, Petyr “Littlefinger” Baelish summarised it best: “Chaos isn’t a pit. Chaos is a ladder.” It is a self-evident truth: power always profits from disaster and from our suffering.

This principle is what drives most of the drama in Game of Thrones, especially in earlier seasons. Those who can deceive their enemy, hide their motive, and sow confusion stand to benefit. While for most of the world climate chaos is a death pit, for climate villains like Trump and the Koch brothers — or, in Westeros, for villains like Cersei — it is a ladder of opportunity.

The thing is that climate breakdown will not only drive up the death count  –  predominantly of poor people in the global South. It will also reduce the ability of social movements  –  the principal agents of system change  –  to organise.

Climate breakdown will likely provide a chance for authoritarians to seize more power as things fall apart. It will certainly present ample opportunities for our world’s versions of the mercenary Golden Company, the private security firms such as G4S, as well as other pimps of misery, to grow ever richer as they either enforce or flog stupid ideas like geoengineering to desperate people.

Season 8 of Thrones kicks off with Jon and Dany’s united front of Northern houses, Unsullied, and Dothraki amassing in Winterfell for the mother of all battles. In a few weeks, we’ll know the result of that battle  – who lives and who dies.

But, in a way, it doesn’t matter. In the game of thrones, “you either win or you die.” If the allied forces win against the Night King, the fight in the south resumes. The game of thrones continues. Kings come and go, even Night Kings, but the game remains.

While the likes of Littlefinger want to keep playing the rigged game, others want to end it.

We, too, live under a system that seems hegemonic, where the sufferings of the many pay for the luxuries of the few, and where cold-hearted bankers mimic their fictional counterparts in the Iron Bank and pour their money not into what is right but into what they mistakenly think will give them a return.

So what’s to be done? Daenerys has an answer in line with the movements for global justice: change the system. 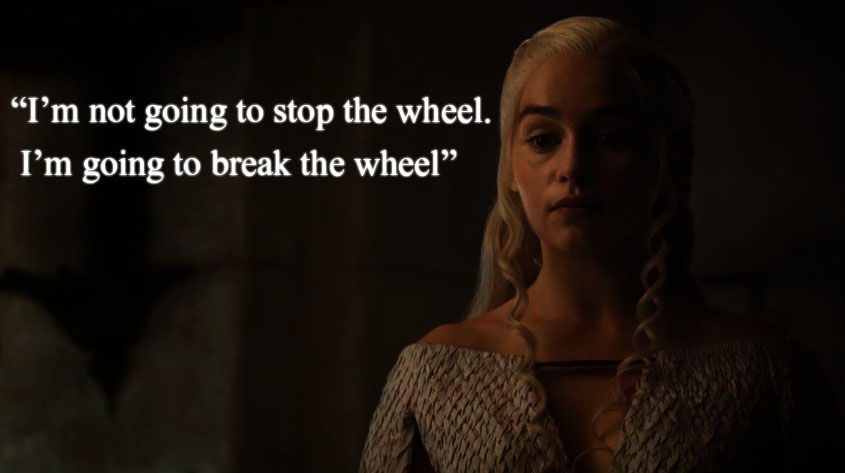 Breaking the wheel requires power. And, as we know, knowledge isn’t power — power is power. Dany is lucky in that she has 2 dragons (RIP, Viserion). Those of us fighting to break the wheel in our world don’t have any dragons. Nobody is coming to save us in the nick of time with a convenient cache of dragonglass.

What we have instead are the earthly equivalents of the Northmen, Dothraki, Wildlings, and Unsullied. People who have decided to shake off their chains, break with convention, say “fuck the king,” fuck their kingdoms, and fuck the games they play. In our own fight for life, the real heroes are those whom history tends to forget. Peoples who have already lived through the end of the world. The countless people who have given their own lives in defence of all life.

The choice now facing elites in both worlds is clear, and Daenerys put it best when talking about the Masters of Meereen during her slave liberation crusade: “they can live in my new world or they can die in their old one.”It’s system change or armageddon. 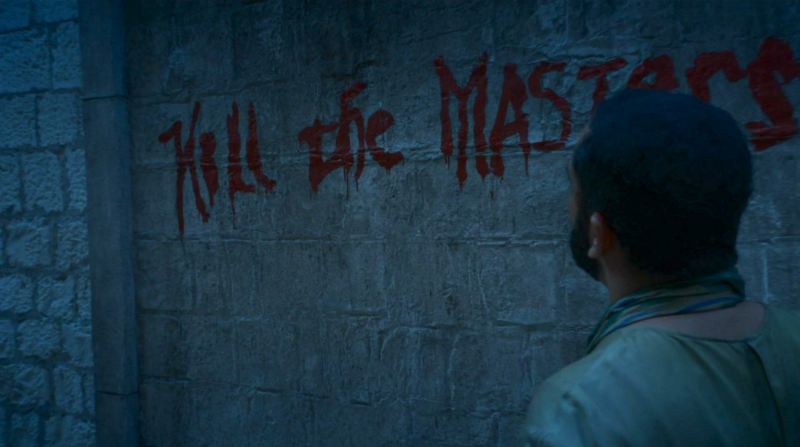 The lone wolf dies but the pack survives

If Game of Thrones teaches us anything it is about the importance of building coalitions. Whether it is Mance Rayder bringing the wildlings together, or Jon and Sansa uniting the houses of the North, many characters come to realise that collective action is the only way to achieve collective liberation, or even collective survival.

Davos puts it simply when he tells Daenerys “if we don’t put aside our enmities and band together, we will die. And then it doesn’t matter whose skeleton sits on the Iron Throne.” Similarly, one of the key life lessons that the Stark girls took from their father is that “when the snows fall and the white winds blow, the lone wolf dies, but the pack survives.” 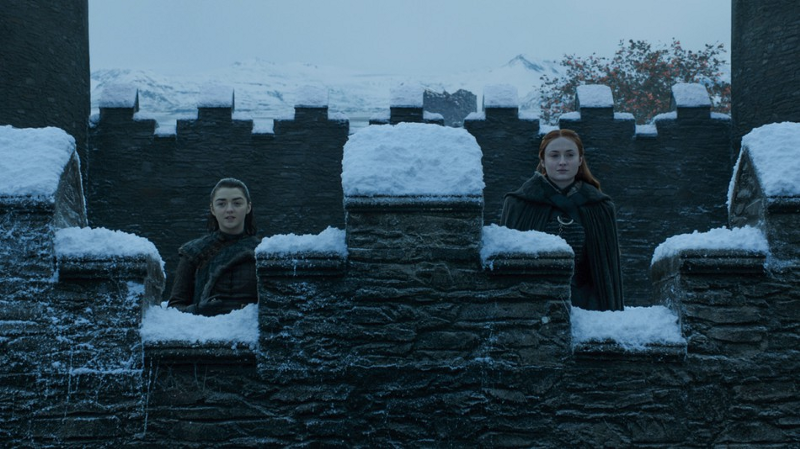 Movements for system change must also put these wise words into practice. We have so little time to make such large-scale and fundamental transformations that we cannot fight alone in our silos. We must be more than the sum of our parts.

This is not to say that everyone is part of the solution — clearly some, our world’s “masters”, are not — but it is to say that the eternal in-fighting and ego-driven purity politics of the Left must be kept to an absolute minimum.

A wise man in this world once said that “to be truly radical is to make hope possible rather than despair convincing.” Our movements must inspire many people to join a fight we have very poor odds of winning. The logic of strategy can only take us so far in this regard. We have to speak to people’s hearts and conjure up a kind of commitment that can usually only be born out of a sense of belonging.

As the white winds sweep across our own world and ecological breakdown intensifies, we will need to take care of each other. Now is a time for community, for universal fellowship, rather than the identity politics of either liberalism or nationalism.

“Don’t fight in the North or the South. Fight every battle everywhere, always, in your mind.”

Conventional wisdom tells us to choose our battles wisely because we can’t do everything at once. Yet this is precisely what our movements for system change must do. We must fight, and win, everywhere.

Obviously, prioritisation is a part of strategy. But ultimately we must win on all of the many connected fronts in our fight for life. Some of us might take on thankless tasks of “damage control” in arenas of struggle that are toxic in themselves (I think of my comrades in the international climate negotiations.)

Others may be propagandists, educators, recruiters, or foot soldiers on the streets, in workplaces, and online. Many will play several roles. Just as each army in Thrones has archers, chefs, medics, as well as strategists, we all have a role. 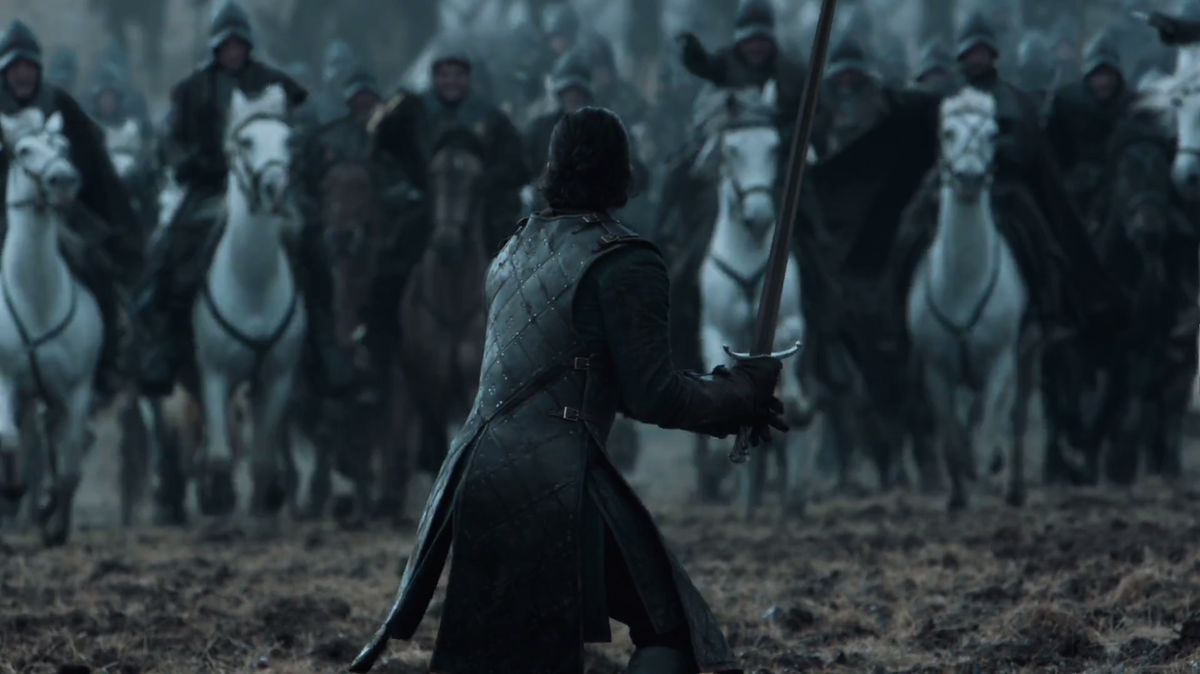 A Dream of Spring

We don’t yet know how things pan out in Game of Thrones. And while we have a very good idea of our own future should we fail to tackle climate change and ecological breakdown, ultimately we don’t know what will come to pass. That’s a good thing.

“Hope locates itself in the premises that we don’t know what will happen and that in the spaciousness of uncertainty is room to act.” This isn’t a quote from a Game of Thrones character, but from author Rebecca Solnit. As Littlefinger says, “a lot can happen between now and never”. It is up to us to make it happen.

Perhaps it was the now-forgotten Ygritte who best captured the essence and imperative of hope. Having already seen the Army of the Dead, and knowing the fate of anyone who gets in the way, she still knew that the point of life is to live. “If we die, we die. But first we’ll live.”

As our movements start to face up to the horrifying reality of climate breakdown and accept the near impossibility of achieving the necessary transformations, we must hope harder, love more, and defy the predictions. In my opinion, this is the most important lesson we could possibly learn. 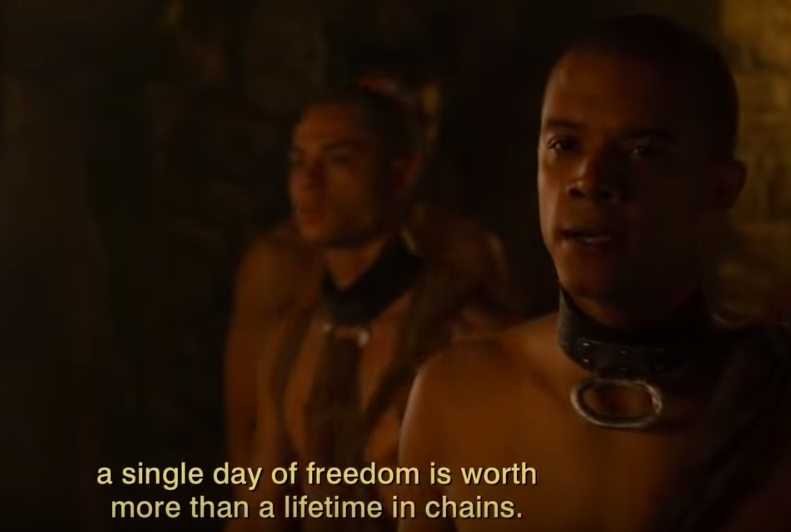 This article was originally published on The World At 1°C. Read the original here.