The cases will be registered under section 188 of the Indian Penal Code along with section 126A and B of the Representation of the People Act. 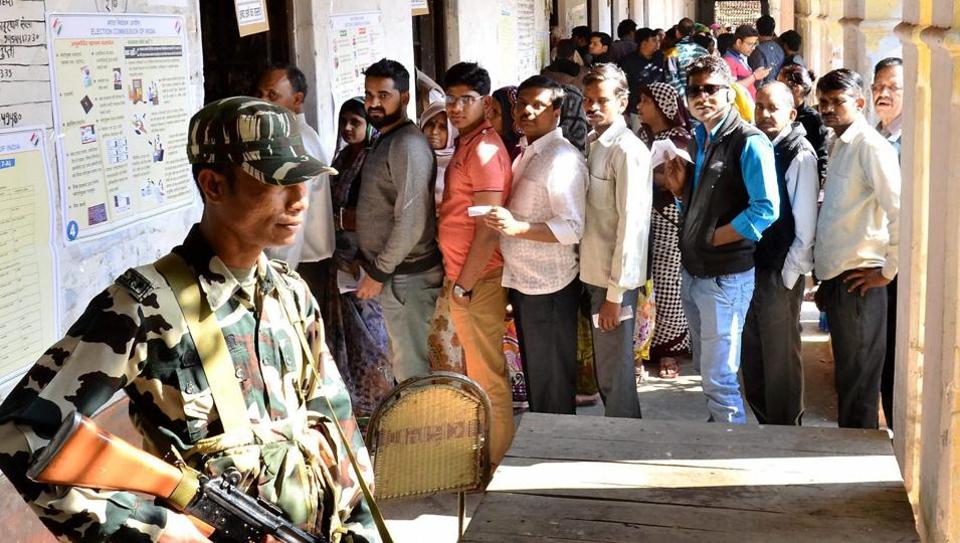 Voters wait in a queue to cast votes during the first phase of UP Assembly elections in Mathura on Saturday. Credit: PTI

New Delhi: A day after The Wire reported on Dainik Jagran‘s violation of Election Commission (EC) regulations by publishing exit poll results after the first phase of the Uttar Pradesh assembly elections, the EC on Monday ordered election officers in the 15 first-phase districts to file FIRs against the newspaper. The FIRs are supposed to be against the editorial heads of the Hindi newspaper.

Despite this clear directive by the EC, the Uttar Pradesh police goofed up by naming The Wire – the whistleblower in the case – as one of the accused parties in the case.

The Wire was the first media house to report that the Jagran group – which leans politically towards the BJP in its coverage – had violated the EC’s rules by publishing the contents of an exit poll conducted by RDI midway through the election. Media houses are barred by the EC from publishing or broadcasting exit poll results until every vote in a given election cycle has been cast, in order to avoid influencing voters.

However, in a strange twist, while the UP police filed an FIR in which it took cognisance of The Wire’s report in order to accuse the Dainik Jagran of breaking the law, it also listed The Wire as an accused in the case.

The text of the FIR notes that Dainik Jagran deleted the poll story from its  website on Monday morning and that the police were thus relying on The Wire’s story to corroborate the charge. But elsewhere in the FIR, the police inexplicably listed The Wire as an accused party.

Speaking to The Wire on Monday night, Rajesh Malhotra, EC spokesperson, said that the inclusion of The Wire as an accused is a “typo” by the UP police and that the EC will get it corrected as soon as possible.

“Our official is sitting at the police station at the moment to get the FIR corrected,” Malhotra said when The Wire got in touch with him at about 10 p.m on Monday evening.

“There is absolutely no case against The Wire. In fact, its report became our eyes and ears. Our order makes it quite clear. We treated thewire.in‘s report on this violation by the Jagran group as crucial evidence. Since it was the first to report on the issue, we have also annexed the article as additional evidence to substantiate the charge,” added Malhotra.

He further said that the FIR was filed on the basis of the EC order on Monday and that the commission is is no doubt about who the accused parties are.

In his order, principal secretary at the EC, K.F. Wilfred wrote, “The Commission has directed that the DEOs of each of the districts covered under the first phase of poll shall immediately file [an] FIR against the Managing Director and/or such other authorities of RDI and Dainik Jagran including the Managing Editor/Editor in Chief/Editor/Chief Editor of the Newspaper under Section 188 of IPC read with Section 126A and 126B of RP Act, 51.” The details of Wilfred’s order were reiterated in a press note on February 13, 2017.

Earlier on Monday, Malhotra had told reporters that the Jagran group’s decision to publish the results of its exit poll was a flagrant violation of regulations and termed the act as “wilful disobedience.”

The Wire also attempted to contact the Dainik Jagran editors for their comments, but they could not be reached.