The Art of Not Living with Dissent and its Discontents

Standing up for Bharat Mata even as we kill reason, sense, and one of her flood plains. 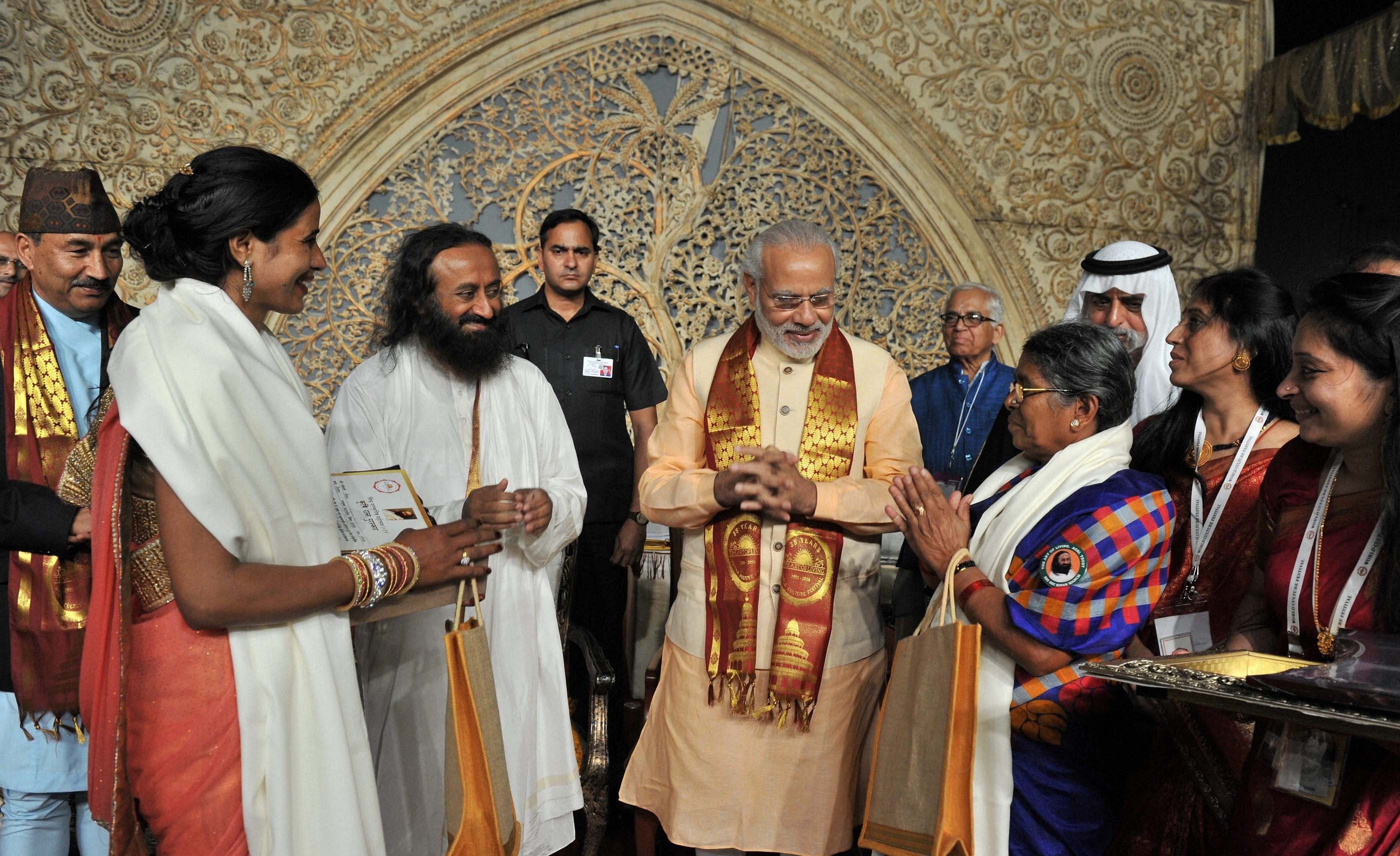 Prime Minister Narendra Mod with Art of Living founder Sri Sri Ravi Shankar during the opening day of the three-day long World Culture Festival on the banks of the Yamuna in New Delhi on Friday. Credit: PTI

Crude is going down the tubes, but snake oil is clearly still very good business if it can fund a circus as monstrous as the one pitching its scabrous tent on the floodplains of the Yamuna between Delhi and Noida.

After establishing that it had no legal sanction, that it has ravaged the local ecosystem and will inflict sustained damage on the environment, the National Green Tribunal in its wisdom let the ‘World Culture Festival’ continue.

The NGT found that every agency that should have stepped in abdicated its responsibility. That was the art of skiving. But the tribunal would not issue a “prohibitory order” because the petitioner came to it late, because there was a fait accompli and because this was “capable of restoration and restitution”. This is the art of giving. Real estate sharks, strip miners, illegal quarries will all exult, but policemen can also take heart: if they stumble upon a rape in progress, they can argue that the victim should have come to them before it started, it’s already a fact accomplished, and a slap on the rapist’s knuckles and wallet later, without unreasonably interrupting him now, should be restitution enough. This is the art of swiving. Consent is unnecessary.

G.V. Desani! Thou shouldst be living at this hour. Where is Hindustaaniwalla Hatterr when you need him?   Only “the personal disciple of their illustrious greybeards the Sages of Calcutta, Rangoon (now resident in India), Madras, Bombay, and the right Honourable the Sage of Delhi, the wholly Worshipful of Mogalsarai-Varanasi, and his naked Holiness Number One, the Sage of All India himself” could do justice to what we now see and are about to see, but Hatterr, sadly, acted immediately on his final beej mantra, to flee from quacks and charlatans like the plague.   His avatar will not be among the 35 lakhs expected at the World Culture Festival, which will in the main be Hindu, kitsch and chaos. None of them, as they trample avidly over what is left of the flood-plain, will have much time for Walt Kelly’s reminder on April 22, 1970, the first Earth Day, “We have met the enemy and he is us.”

For us, as the chief minister of Himachal Pradesh has reminded us, the enemy is Pakistan, though our prime minister drops in there for tea. It is now seditious for students to yell ‘Pakistan Zindabad‘, and they can land up in jail if a stool pigeon coos into a ministerial ear that they have. In 1964, when I entered college, two years after China had done its schoolmasterly bit with the Indian Army, Marxist students chanted “Amader Chairman Chairman Mao” – Chairman Mao is our Chairman – and when all of us shouted “Amar nam tomar nam Viet Nam” we presumably denied our Indianness, but even then, when the state was so much more fragile than it should be now, it took all this in its stride, as any mature democracy would. But Pakistan stays the auld enemy, inveterate in its hostility, implacable in its hate, diabolical in its use of terrorism as state policy, which of course no other nation does and India, tauba tauba, would never dream of doing.

The hyperventilating anchor whose programme every evening is in every way like online pornography, which no one will admit to watching, reminds us of the cost the nation has had to bear, of the lives lost. Which of course is true, but as the Brihanmumbai Municipal Corporation told the Supreme Court this Wednesday, stray dogs have killed more people in that metropolis than terrorists have.

If Pakistan is the enemy, it is disconcerting how much like the old Pakistan the new India is becoming. We are increasingly them, not in empathy but in emulation. The spirit of reasoned dissent, without which democracy withers, is being snuffed out, as unpatriotic. The nation has been raised to the pantheon. The religion of the greatest number is the greatest good.  Faith is conflated with race, race with nationality. The government is ridden by decrepit sadhus and swayamsevak zealots, an unholy alliance of the knackered and the knickered.

The army is now the touchstone on which patriotism is tested, the symbol and the saviour of the nation. Even the judiciary is not immune to this infection: the sermon with which the Delhi high court granted bail to Kanhaiya Kumar astonishingly told “all concerned that they are enjoying this freedom only because our borders are guarded by our armed and paramilitary forces”. Our forces, the judge reminded us, were on the Siachen Glacier and in the Rann of Kutch, which of course is where they should be, and, she might add now, on the Yamuna outside Delhi, where they should not, slaves for a godperson.

Pakistan has been there, done that, and been done because it did it, though its army would refuse to be free labour for any pir or shaikh, and is better at burning bridges than building them. Pakistan too must see India as the enemy because now, as we become more like them, Pakistan is becoming more like we used to be. As the Washington Post noted in an article on March 9, “so far this year, Sharif and his party have defied Islamic scholars by unblocking access to YouTube, pushing to end child marriage, enacting a landmark domestic violence bill, and overseeing the execution of a man who had become a symbol of the hatred that religion can spawn here.” (And let us note that, unlike Afzal Guru and Yakub Memon, who were hung to pander to majoritarian bloodlust, Mumtaz Qadri was executed in the teeth of popular opposition, with the government knowing there would be a price to pay.)  The paper attributes this change to “Sharif’s ambitious economic agenda”, which means that, unlike the frenemy with whom he takes the occasional cup o’ kindness, Pakistan’s prime minister understands that modernity cannot coexist with bigotry and obscurantism.

Or with the fevered nationalism which is the stock in trade of so many of our ministers, the erudite minister for HRD among them. (She did quote Shakespeare to Sitaram Yechury. Fair is foul and foul is fair, she said, and nothing could be more apt, because those were the words of the witches in Macbeth.) It would seem from her tirades in Parliament against JNU, its students and their ilk, that for her the nation is protean, shifting shapes between Bharat Mata, Ma Durga and India that is Bharat. To see virtue in Mahishasura is as treacherous as hoping Pakistan remains zinda. But every Bengali Hindu who has grown up with the Mahalaya could remind the minister that the Devi is worshipped as sarvabhutesu, that she is matri, tushti, buddhi, chetana and, of course, Shakti, but also kshuda, trishna, vritti, chhaya, even bhranti. If the speeches of Kanhaiya Kumar and Umar Khalid were bhranti, they also shook with kshuda and trishna, all forms of the Devi. Ya Devi, the Mahatmaya intones, sarvabhutesu smriti-rupena samsthita, which must please the minister, but if the nation is the Devi, her forms embrace Irom and Soni and Ishrat as well.

It’s extraordinary how little things have changed over a hundred years. In 1896, Rabindranath Tagore introduced Vande Mataram to the Congress at its 12th session in Calcutta (with Rahmatullah Sayani presiding!). Twenty years later, deeply worried that a violent nationalism which conflated the nation with the goddess and patriotism with religion, was leading India into a vortex, he wrote his darkly prophetic novel Ghare Baire, usually translated as ‘The Home and the World’.   The central figure of Bimala, who has fallen under the spell of Vande Mataram, says at the height of her infatuation, “I want an image of the nation that I will call Ma, Devi, Durga, before whom I will offer sacrifices in a deluge of blood”. Her husband, Nikilesh, through whom Tagore spoke, tells his wife, “I am prepared to accept my country as the best there is, but what I worship is much greater than the nation. To worship the nation is to bring about its destruction”. A century later, that still says it all.

Vande Mataram is our national song, now being lifted to a catechism, odd in a secular democracy. Again, we are the enemy and they are us. Across the border, the alternative anthem is “Hum dekhenge”, the marvellously subversive ghazal of Faiz Ahmed Faiz, a Marxist like Kanhaiya Kumar, jailed by military dictators and then sent into exile. It uses Islamic phraseology to proclaim the end of autocracy and misrule, including the line Sab buth jab uthwaye jayenge, the first words of which strangely echo the sarvabhuteshu of the Mahatmaya, though here the buth are the false idols – Ayub, Yahya and Zia – who will be driven from the Kaaba.   It was dangerous to recite Faiz in Zia’s time: it was treacherous and anti-national. It was also dangerous to wear the sari, which was unIslamic and identified with the enemy. In 1985, with Zia at the zenith of his power, Iqbal Bano staged one of the most remarkable protests there has ever been. In the Lahore Stadium, before an audience that was estimated at close to 50,000, she appeared in a black sari and sang “Hum dekhenge”, electrifying her audience, which started to shout “Inquilab Zindabad” as she sang. That performance, which has passed into legend, made the song iconic. It is impossible to hear it without being moved by the courage of the singer, the anger of the poet and the response of the crowd.

If Sri Sri Ravi Shankar has invited anyone from Pakistan to perform at his jamboree, it would be a small saving grace if he or she, or anyone, sang Faiz’s immortal song when the powers that now rule India’s destiny are in the audience. The double Sri prefix should not be a licence only to kill a flood-plain.