Carnatic Balm for an Aching Land of Fences and Walls

Israeli aficionados of Indian classical music have invited T.M. Krishna to perform in Israel and the Palestinian territories. 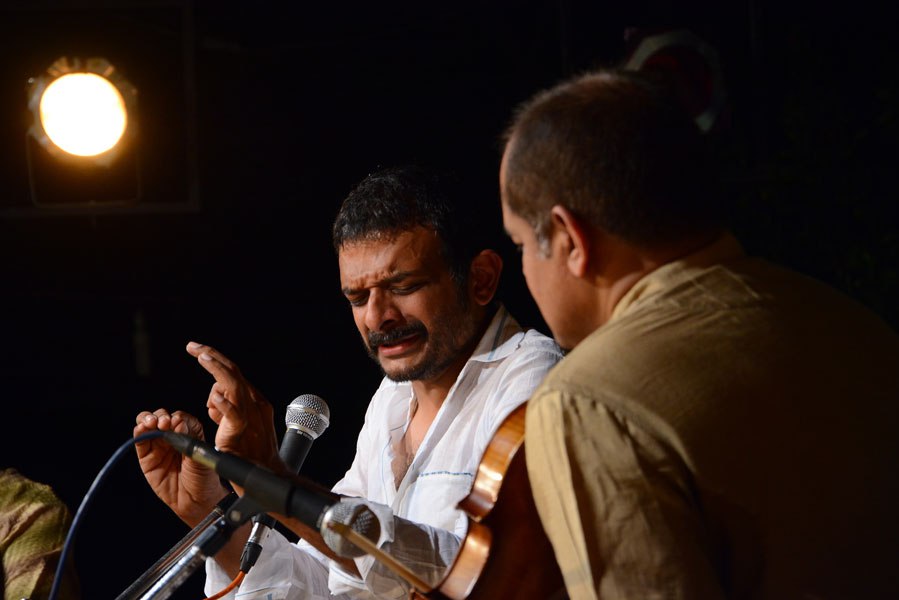 In darkening times such as those we inhabit, each ray of light counts. Perhaps most sustaining of all is the light that comes from visible sound, one of the traditional principles at work in the classical system of Carnatic music. Truly moving and meaningful sound is something to be seen as well as heard. When my colleague, Prof. Yigal Bronner, and I took a group of our students and colleagues on a 10-day tour of Tamil Nadu and Kerala in 2014, we were privileged to hear a private concert by T. M. Krishna in Chennai, in the home of our friend Ranvir Shah (with the virtuoso Akkarai Subbalaksmi accompanying on the violin).

As is invariably the case in my experience of Krishna’s performances, this one was at or perhaps beyond the edge of what is humanly possible. For colleagues who were new to South India, this intimate concert was a revelation, an overwhelming artistic introduction to the riches of Carnatic music. Note that, in contrast to the normative performance spaces today – the usually large and often alienating sabhas requiring many microphones to enhance the sound – Carnatic kritis were, and still are, meant to be sung and absorbed in far more intimate surroundings, where the full play of nuance and modulation can be grasped. Even today we can sometimes find musicians trained in the old Thanjavur style that requires precisely that kind of subtle listening.

On that evening in Chennai we conceived the idea of a visit by Krishna to Israel and the Palestinian territories. Our initial thought was that we could try to set up a “peace concert”, bringing together people of good heart and will from both sides of the agonising conflict, an Israeli-Palestinian Woodstock. Such people are still, by far, the majority, though their voices are mostly unheard. In the end, the political situation made such a joint venture impractical. But thanks to an initiative by the Israel Academy of Sciences and Humanities and its president, Professor Nili Cohen, T. M. Krishna will be coming to give several concerts in Jerusalem (both western and eastern parts of the city) as well as in Yafo or Jaffa on the Mediterranean coast. He is being accompanied by H.N. Bhaskar on the violin and Praveen Sparsh on the mridangam.

Krishna will also be giving a four-hour master class for students and musicians at the Academy on January 22. The Academy of Sciences and Humanities – the premier academic institution in Israel – is eager to host this master artist and public personality, the recipient this year of the prestigious Magsaysay Award, given to honour, among other categories, exceptional service in creative communication arts, and peace and international understanding.

Probably few in India realise the intensity of interest in classical Indian music in Israel. It is possible that, after India itself, Israel has the most passionate audiences for Indian music, especially in the Hindustani tradition. In part, this hunger derives from direct experience by young Israelis in India; they come by the tens of thousands every year, some seeking relief from the grim realities of the Middle East, others looking for what we might call spiritual fulfilment, which definitely includes the study of music, whether vocal or instrumental.

There are by now hundreds of young musicians in Israel who can sing dhrupad or khayal, or perform on flute or tabla or mridangam or Indian violin; some of them come to our department at the Hebrew University to study Indian languages such as Sanskrit, Hindi, Tamil, or Telugu. We also teach introductory courses on classical Indian music every two or three years, to large classes.

Israelis, like the Jews in general, are a restless and curious people, and Indian music is one conspicuous area where their restlessness can temporarily come to rest. Among them is the outstanding dhrupad performer and teacher, Osnat Elkabir, a student of the Dagar brothers and of Pandit Ritwik Sannyal in Varanasi, among others; she studied at the feet of these maestros for some 14 years and now has taught generations of students in Israel, including myself.

This musical love affair between two ancient cultures with strong but subterranean historical links is unfolding beneath the political radar and outside the often narrow and fanatical public space. It is a story still waiting to be told, and rich in promise, not only among Israelis but now, also, among Palestinian audiences.

A day may yet come when the very names of today’s narrow-minded politicians will be long forgotten, but the first visit to Jerusalem by the greatest of the modern Carnatic singers will live on in people’s minds.

In these days of violent political enmity and destructive (self-destructive) prejudice, it is the artists, musicians, and poets who may be able to bring communities together, bridging the abyss between them.

Music communicates on a level deeper than slogans, deeper than words, magically passing through barriers and walls directly into human hearts. Israel-Palestine today is a warren of mostly useless, and ugly, walls and fences, indeed an endless series of fences within fences; we urgently need to appeal for help in removing them from the goddesses and gods invoked by Muttusvami Dikshitar and Tyagaraja in their compositions, which we know from empirical experience can melt even a heart of stone.

If anyone can achieve that, it is T. M. Krishna, for whom music is a medium for public moral statement and an instrument for making peace.