From Brahma Beer to Prem Baba: The Journey of a Brazilian Guru

Janderson Fernandes de Oliveira used to dream of a man with a white beard who he met years later in an ashram at Rishikesh, after which he became a guru at the ashram.

Brahma, the Hindu god of creation, is not a popularly worshipped deity unlike the other two gods of the trinity, Shiva and Vishnu. But Brahma is popular among the Brazilians. Not as a god though, but as a brand of beer. Brahma is advertised in posters, bill boards and media all over Brazil. The company which produces this beer – Companhia Cervejaria Brahma (Brahma beer company) –was established way back in 1888. Brahma beer is an essential ingredient of the spirit of Brazilians, known to be happy go lucky, beach-loving, football-crazy, samba-singing, carnival-parading, colourful, cheerful and playful people.

Most Brazilians who drink the beer do not know that Brahma is the name of a god. This was also true of Janderson Fernandes de Oliveira from Sao Paulo.

When he turned 33, Oliveira stopped drinking Brahma beer and opted for Ganga jal (Ganges water), chanting the name of Brahma and other gods. He came to India for his honeymoon in 1999 but ended up embracing celibacy. He has taken to Indian spiritualism and become a guru in the spiritual capital Rishikesh with the name Sri Prem Baba. He says, “One does not choose to become a guru. One is chosen”. He was, indeed, chosen as the successor by Hans Raj Maharajji Sachcha Baba, head of the Sachcha Dham ashram in Rishikesh in 2011. Maharaj ji declared, “A new saint brings a new message”. Prem Baba is proud to be a son of the Sachcha lineage.

When Oliveira came to India for the first time with his wife, they travelled to many touristic and spiritual places. But the young couple got a cultural shock, like most other western tourists. The poverty, unhygienic conditions, dust, noise and crowds made India an uncomfortable and strange world for the newly married couple. They even thought of cutting short their trip and getting back to Brazil. But someone suggested they visit Rishikesh. While travelling from Haridwar to Rishikesh in an old Ambassador car, Oliveira recounts how he felt a ‘new sensation’.

A wave of divine love and light flooded him, he says. Filled with an intense happiness, he began singing. He had a premonition that he was finally on the right road to fulfilment. He had an audience with Sri Hans Raj Maharaj ji of the Sachcha Dam ashram in Rishikesh. He realised that the old man with the white beard who had invited him to Rishikesh in his recurrent dreams since adolescence was none other than Maharaj ji himself. He fell at the Indian guru’s feet and surrendered himself.  Maharaj ji smiled and said that he was expecting this moment. Oliveira recalls he wanted to ask many questions but the questions disappeared – overcome by a profound silence and a new energy. He felt as though his search was over and he had received answers to all his questions about life. After three years of learning and apprenticeship in the ashram, he reached ‘self-realisation about his purpose in life’, got ‘illumination’ and experienced ‘communion with God’.  He went to the Ganges, dipped his feet in the water, meditated and prayed. He says he heard Mother Ganga telling him, “See how free I am and unattached to anything ” and felt a sense of ecstasy again. When he went back,  Maharaj ji told him, “Now you are a guru. You are free to teach as you like.” And named him Prem Baba. Just before his death in October 2011, Hans Raj Maharaj ji nominated Prem Baba as his successor in the line of the Sachcha ashram tradition and passed on the ‘gurumantra‘ to him. 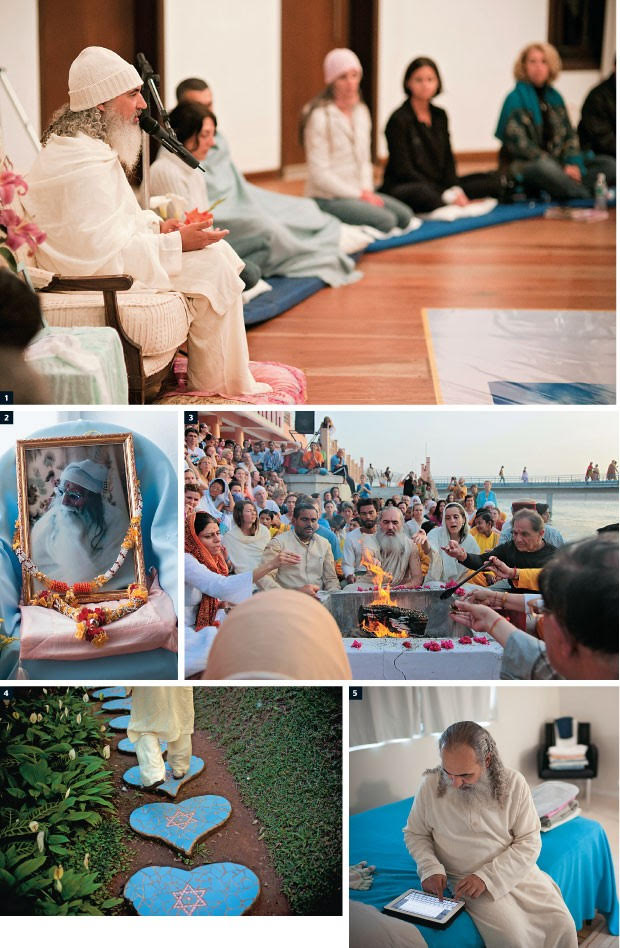 Prem Baba has given a Brazilian touch to Indian spiritualism with an emphasis on ‘love’ to resonate with his name Prem, which means love. Brazilians are curious and excited with the ‘Brasileiro que virou guru’ (the Brazilian who has turned into a guru) and who can teach Indian wisdom through their own language and with a Brazilian perspective. In his lectures in Brazil, Prem Baba goes beyond the spiritual and refers to the political, economic, environmental and social issues and the recent crisis of Brazil. He has established two large Sachcha mission ashrams in Brazil. One is located in Nazare Paulista, a small town about 80 km from Sao Paulo. The other one is near Alto Paraiso, 200 km from Brasilia. There are other centres in Rio de Janeiro, Fortaleza and other parts of Brazil. The Baba has many celebrity followers in Brazil. Prem Baba’s rise as a guru has taken Brazilian interest in Indian spiritualism to a new level. Thanks to him, Rishikesh is receiving more Brazilian and Latin American visitors.

Prem Baba spends two or three months every year during winter months in India, mainly in Rishikesh. In 2017, he will be there from February 2 to March 15. His daily programme includes meditation, the chanting of mantras, yoga and satsang. Many Indians throng to Prem Baba, curious about the Brazilian way of interpreting Indian sachcha, or truth.

The Baba has gone global and joined the jet-setting guru circuit, supported by wealthy people around the world. His Awaken Love Movement and Path of the Heart institutes have centres in 14 countries, which include the US, Israel, the Netherlands, Norway, Argentina and Spain. It is a new experience for non-Brazilian foreigners to be taught Indian spiritualism in Portuguese, spoken by a Brazilian baba. He speaks only in Portuguese and his speeches are translated into English and other languages.

Prem Baba has his own brand ‘Path of the Heart’ method of self-knowledge, in which he gives courses. He combines Indian spiritualism with western psychology. Besides explaining the mysteries of existence, he gives advice for day to day life such as how to control anger and envy, how to develop one’s talents and maintain relationships. He supports the Clean Ganga project and Clean Rio Tiete – the Tiete river going through Sao Paulo also needs cleaning up – and other environmental and educational projects.

Oliveira was born in 1965 in Sao Paulo in a lower middle class family. Even as a child, he recalls he started having visions and profound thoughts. At the age of 14, he went to yoga classes where he heard prayer songs in Sanskrit. He used to get dreams in which a wise old white-bearded man from the Himalayas told him, ‘when you reach the age of 33, come to India, to Rishikesh’. He took up a job as office boy in a slaughter house from the age of 14 to 19. Thereafter, he started a yoga school and practiced alternative therapies. In 2003, he got a degree in clinical psychology from the University of Sao Paulo. At this time he had many students and followers but still felt as though he was a blind person guiding other blind people. He had studied many spiritual schools of thought including shamanism from the Brazilian jungles but did not get the answers to his questions. When he was 33, he went through an existential crisis. In 1999, he married Mara Regina Caccia from Sao Paulo. He changed her name to Prem Mukti Mayi and named his daughter Nuyth Ananda. Prem Baba is now separated from his wife and is celibate.

Brazil, the largest Catholic country in the world, has several thousands of followers of Sai Baba, Art of Living, Hare Krishna, Brahma Kumaris and other major and minor Indian spiritual groups. There is an active Ramakrishna Vedanta mission centre in Sao Paulo (with branches in other parts of Brazil) which is headed by the Tamil-speaking Swami Nirmalatmananda, who gives discourses in fluent Portuguese. The Hare Krishna temple in the Novo Gokula community near Pindamonhangaba (150 km from Sao Paulo city Rio de Janeiro) has one of the most beautiful settings  in the world,  similar to the pastoral scenery depicted in the Krishna tales of India. It is located in the midst of a forest and on the side of a stream with hills around. It is a perfect spot for meditation; serene and quiet except for the sounds of water rushing through the pebbles, the chirping of birds and the rustling of the leaves in the breeze.

Yoga and meditation have become mainstream activities even among young Brazilians. Ayurveda is also becoming popular in Brazil as an alternative medical treatment. Palas Atena, a reputed NGO in Sao Paulo offers courses in Indian philosophy besides propagating Gandhian thought and methods of non-violence. There are a few Brazilians who perform and teach Indian music and dance. There is a Catholic priest (of Indian origin), Father Joachim Andrade, who dances and teaches Bharatatyam in Curitiba city.

Oliveira is the first Brazilian and Latin American to become an Indian guru. Although many Latin Americans have become teachers of Indian spiritualism, no one has reached the heights that Prem Baba has – building a fascinating bridge between the spiritual Rishikesh and the sensual Rio de Janeiro.