Journalist is threatened after urging people to report the sexist video on YouTube. 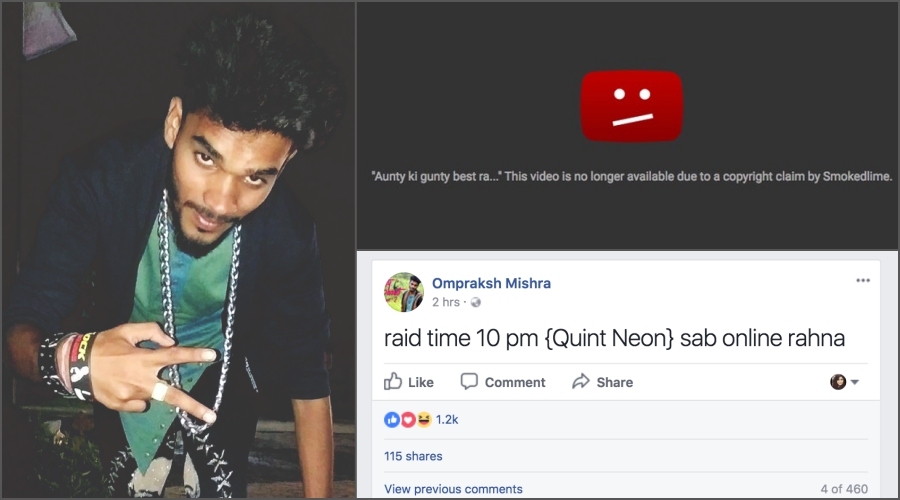 New Delhi: You know something is inherently wrong with society when hundreds of millennials gather in multiple cities across the country to sing a song that not only glorifies, but celebrates rape, misogyny and sexual harassment.

Uploaded on YouTube in late 2015, ‘rap king’ Omprakash Mishra’s “Bol Na Aunty Aau Kya“, a cringeworthy, sexist song about a boy who wants to have sex with an aunty who refuses to ‘give in’, has become the ‘millennial anthem of the year’.

The video, which had over 3,000,000 hits, 30,000 likes and 60,000 dislikes before it taken down by YouTube because of copyright issues, was ‘discovered’ by humour pages on Facebook only this year.

It all started with hundreds of strangers gathering in Delhi’s Connaught Place on September 11, 2017 after a Facebook page, ‘Shit Indians Say‘, created an event and invited people to ‘shout Bol Na Aunty Aao Kya’.

“It was supposed to be sarcastic. But 100 people turned up, and when they started chanting and walking around Connaught Place, other people joined them and the numbers increased to 500. I never thought so many would actually turn up,” Kyle Fernandes, the 19-year-old co-founder of the page told Mid Day.

“People need to take this in good humour, have a broad mind and not take it literally. We listen to songs by Kendrick Lamar and Eminem and worship them; this was supposed to be fun too. But now that I know the power of the page, I will organise a charity event instead, and not pick such a topic again,” he added.

Invites for similar events were sent out in Maharashtra and Karnataka. While Ankit Shah, the host of the Mumbai event, claimed it was a joke and cancelled it, the Bengaluru police denied permission for the rapper to perform in the city.

“It was supposed to be a spoof page, like the ‘Everybody Point their Fans at the Hurricane to Blow it Away’ event. It was meant to be for laughs, even the first few people who ticked ‘Going’ for the page, did it for fun. We thought just a few would get together just for laughs. The rapper Omprakash Mishra also called and said he is coming. Once we realised that so many people might actually turn up, like in Delhi, we cancelled the event,” Shah, who works for the comedy group ‘All India Bakchod, told Mid Day.

“We will not encourage a Facebook event which includes sexist lyrics. So far we have not been approached by the organisers seeking permission for the event… If the organisers go ahead with the event we will take legal action,” Bengaluru city police commissioner T Suneel Kumar told the Deccan Herald.

The original video might have been removed from Mishra’s official YouTube channel, but it can still be easily found as hundreds of fans across social media platforms have uploaded it on their profiles and pages. 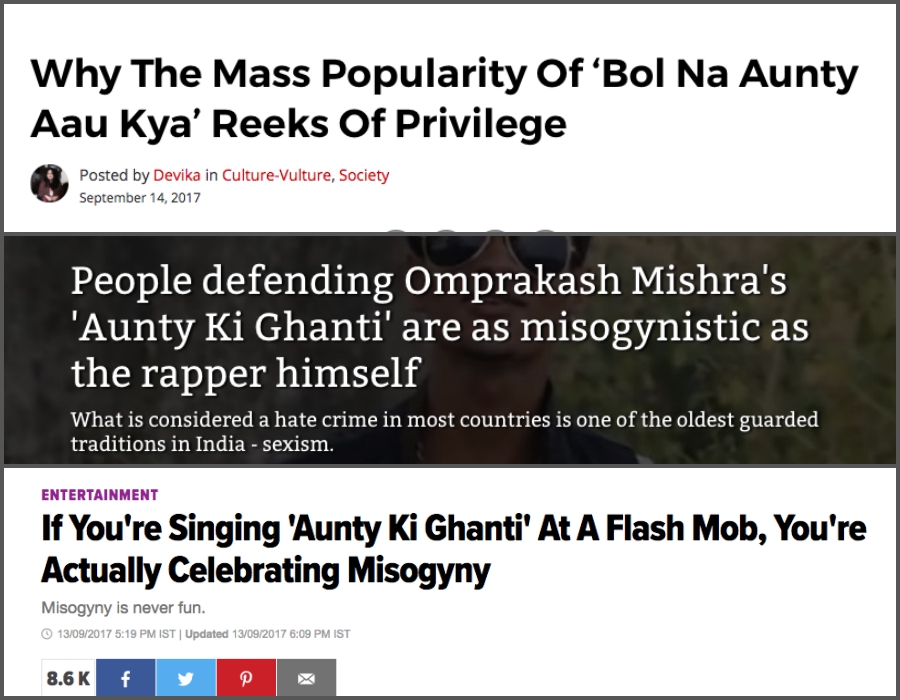 While websites like HuffPost, DailyO and Youth Ki Awaaz called out Mishra and his fans’ misogynistic behaviour, Buzzfeed’s Sahil Rizwan wrote: “Hundreds of strangers on the internet had actually got off their chairs and gathered in service of a greater good – to hit on a non-existent aunty.” 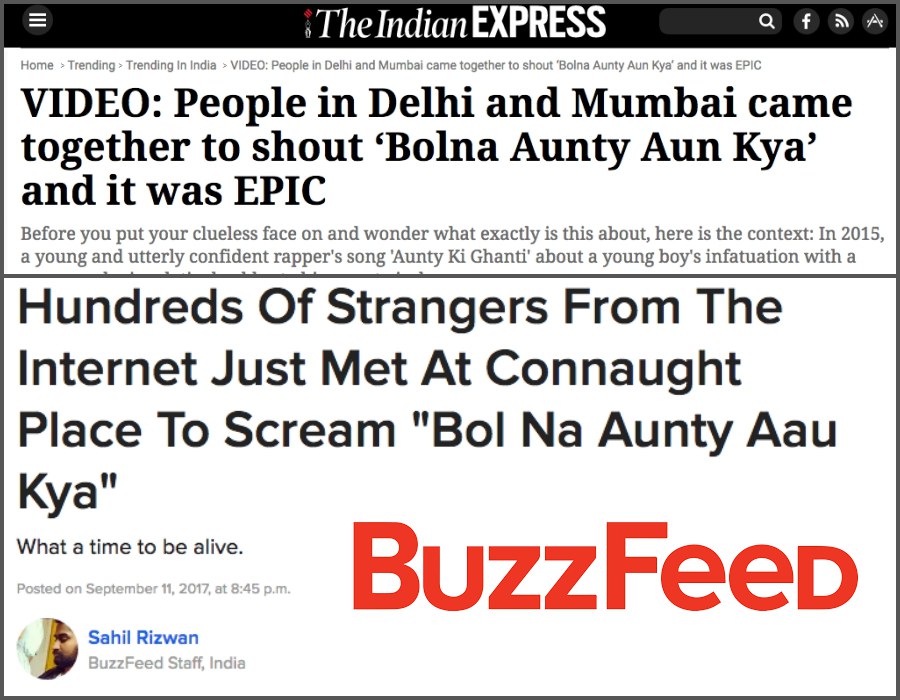 Applauding the fans of the “young and utterly confident rapper”, the Indian Express congratulated them for “making history in their own sweet way”.

On September 13, The Quint put out a video urging its readers to report Mishra’s rap video on YouTube so that the video-sharing website is forced to take it down. Soon after the video was shared on social media, the website received a barrage of criticism from Mishra’s fans.

The Quint was forced to file a police complaint on September 16 after its journalist, Deeksha Sharma, received death threats on WhatsApp in the middle of the night, reminding her of what happened to Gauri Lankesh, a senior journalist who was recently shot dead outside her house in Bengaluru. 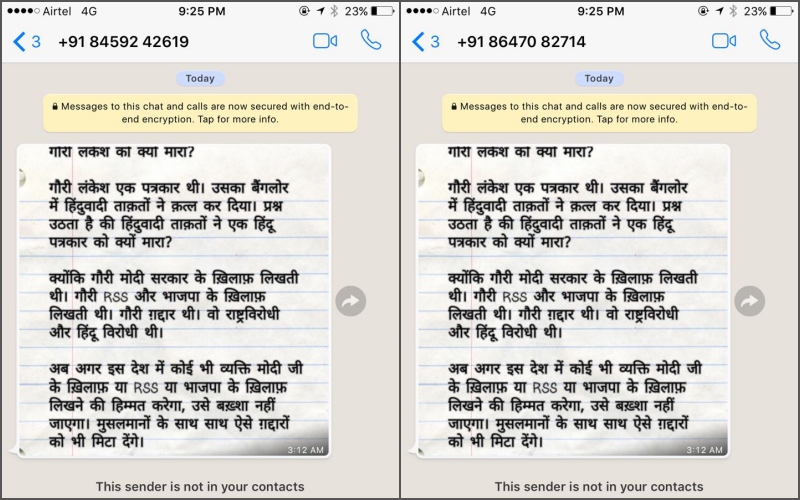 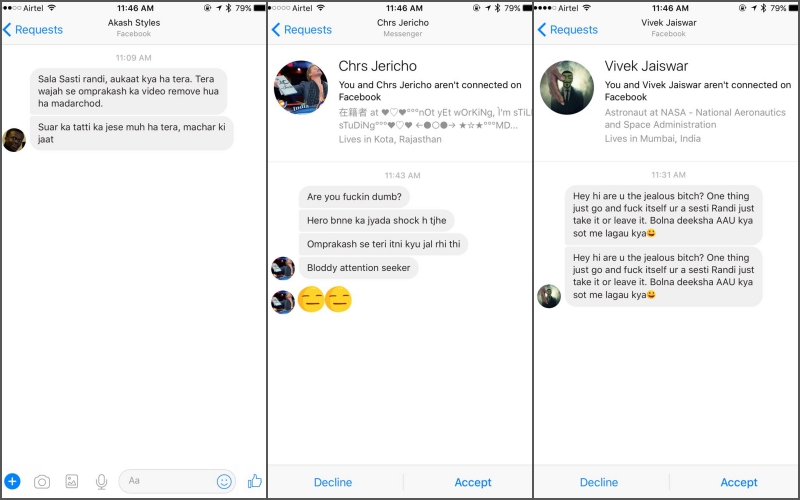 “None of us thought that we’d received so much hate. In some way, it’s all proving the point in my video but no, didn’t expect this at all,” Sharma, who believes she was targeted more because of her gender, told The Wire. Here’s a copy of the complaint filed by The Quint: 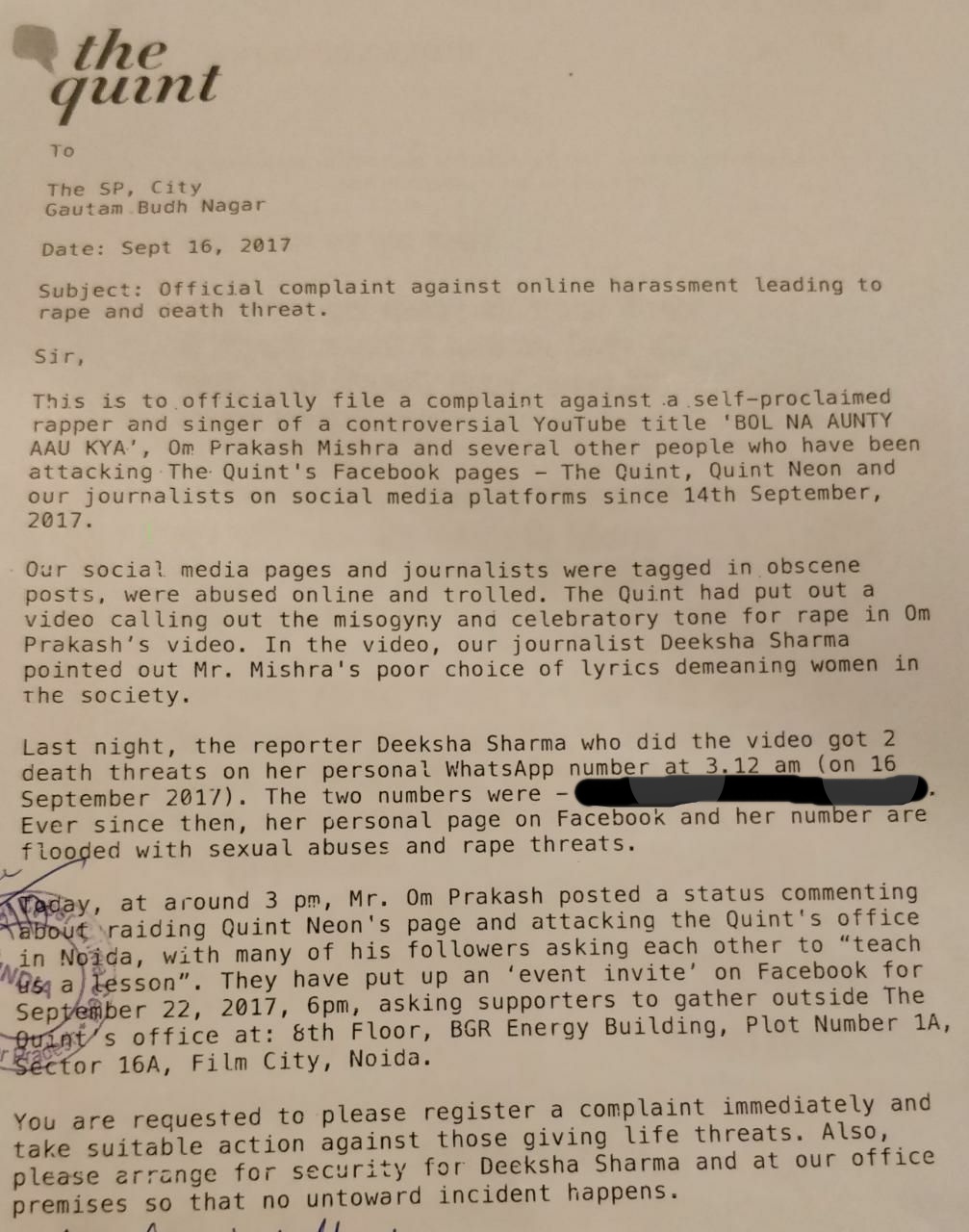