Our news is shaped by geographical and cultural proximity, the need for novelty, the frame of our existing narratives and how we value different individuals around the globe. 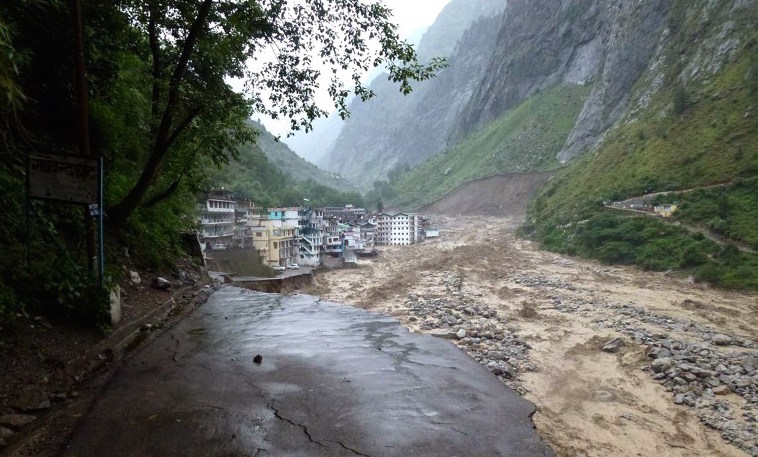 Where in the world? Credit: diariocriticove/Flickr, CC BY 2.0

August was an agonising month for weather disasters around the globe. Relentless floods in South Asia took over 1,200 lives and displaced another 41 million in India, Bangladesh, and Nepal. Sierra Leone was rocked by its worst natural disaster, with mudslides burying a 1,000, displacing another 2,000, and hundreds still missing. In Nigeria, President Muhammadu Buhari stated that over 110,000 had fled their homes in the state of Benue due to intense flooding. And in Houston, Texas, 70 were killed and 30,000 ousted as Hurricane Harvey swept away homes and devastated the city and its surrounding areas.

Global media attention in August paid to four weather disasters – in Houston, South Asia (India, Nepal, Bangladesh), Sierra Leone and Nigeria. The attention is plotted in the form of sentences published per day on each of the disasters in a set of over 1,500 English-language news outlets from around the world. Source: Media Cloud

A morbid death arithmetic points to the predisposition in covering death and disasters in Western countries over the developing world. For every person dead in Houston, there were over 2,750 stories published in global media on the hurricane compared to the negligible 33 for South Asia or 18 for Sierra Leone. 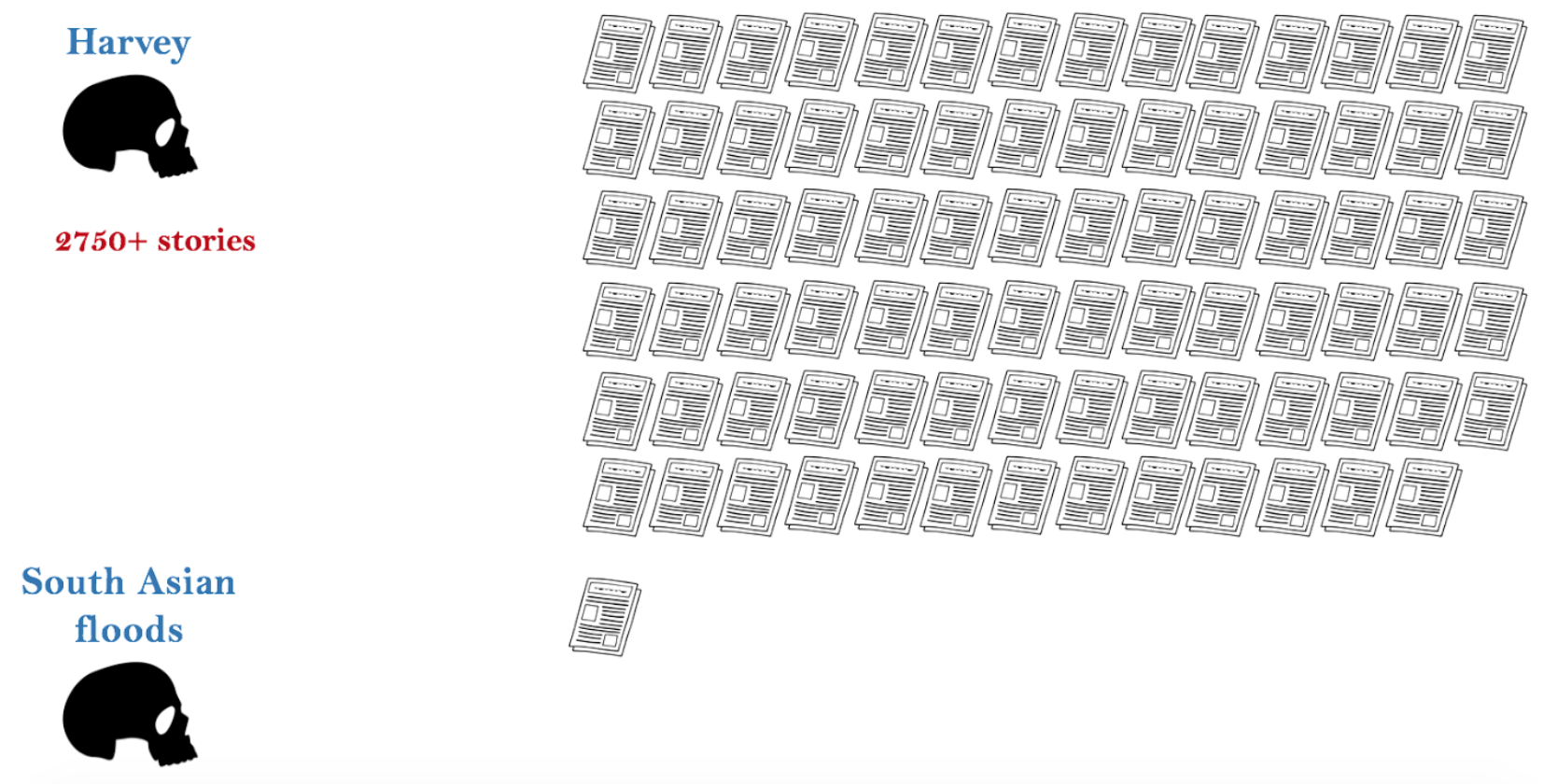 For every person dead in Harvey there were over 2750 stories published in global media on the hurricane, compared to the negligible 33 for South Asia. Source: Media Cloud

When looking at the trend coverage across specific countries, for the US mainstream media to have focused more on Harvey than South Asia is understandable. News within one’s own borders takes priority and provides information to those affected and those looking to help the affected. However, that the coverage of Harvey was as large as 21-times the magnitude of coverage for all the South Asian disasters is less understandable, but in line with the long-standing criticism that American media is little concerned with global issues that don’t directly affect them. In a blog post in 2015, Ethan Zuckerman, the director of the Centre for Civic Media at the MIT Media Lab (where this author works), pointed towards a similar skew in US media in reporting terrorist attacks.

In the British mainstream media, the proportionate difference in coverage between Harvey and South Asia’s floods was lower but still significant. Harvey received nine-times as much coverage as South Asia did. Both India and the US are key trade partners of the UK, and nearly 5% of the country’s population is ethnically South Asian. The skew is less justifiable.

Still less defensible is that English-language news media in both India and Nigeria also covered Harvey in far greater proportions than they did of disasters in their own regions.

The floods across India this August were most intense in the states of Bihar and Assam, where hundreds of relief camps have been set up by the government, and in the city of Mumbai, where rains brought the financial capital of the country to a complete halt. Looking at a collection of over 650 English news sources in India for the month of August 2017, 3,282 stories were published about Harvey, 2,916 stories about floods in Mumbai, 2,250 about those in Bihar and 1,834 about Assam. The neighbouring regions of Nepal and Bangladesh got even lesser attention, with 1,182 and 344 stories respectively – although over 8.6 million people were affected just between these two countries.

The number of stories published about Harvey in the Indian English-language news media in August v. the coverage of natural disasters within India and South Asia itself. Source: Media Cloud

Similarly, in a collection of mainstream English-language media in Nigeria, Harvey received more than twice the coverage of the floods within Nigeria. Nearly 3,000 homes have been reported submerged and there have been complaints of slow government help.

The graph above compares The number of stories published about Harvey in Nigerian English-language news media in August v. coverage of other natural disasters around the world and in Nigeria itself. Source: Media Cloud

There may be a variety of explanations for why international reporting as well as local reporting focused more on Harvey than any of the other disasters.

For one, large-scale damage caused by disasters in developing countries is not surprising, given the poor infrastructure and disaster-relief systems. That kind of damage has a far less shock-and-awe element than a key American city like Houston getting washed away. Further, floods in South Asia are a more common weather problem: there have been nearly 10 major deluges in the last two decades, while this was only the third flood in Houston in the last 50 years.

That global news often focuses more on disasters in the West could also be a feature of foreign newswires. Reuters and the Associated Press, the two biggest services, are being increasingly used to access international happenings as newspapers face budget crunches and cut staff. And both newswires may come with their own skew: the Associated Press has one local bureau in every state in the US but one per country elsewhere; Reuters has 22 offices in the US but only 19 across all of Asia and four across Africa.

The minimal focus within Indian and Nigerian press on their own disasters could be due to the difficulties of getting data or images from the affected locations, compared to accessing international newswires for data on Harvey. Both states of Bihar and Assam in India can be tough to traverse during heavy floods, and reporting from Northern Nigeria is frequently a challenge due to the various conflicts in the region.

More likely, however, is that this skew in reporting is a continuation of the general trend in both countries to ignore regions outside the major cities. The English press in India is frequently criticised for focusing primarily on the metropolitan cities of Mumbai and Delhi at the cost of both rural India and smaller neighbouring countries. Even within the current context, the floods in Mumbai got more attention than the far-worse floods in rural Bihar and Assam as well as in Nepal and Bangladesh. In Nigeria, the northern area where the floods happened is primarily rural and often excluded from national discourse as well. This divide is further entrenched with a linguistic split: most English-speakers reside outside of Northern Nigeria, where Hausa is dominant.

In Johan Galtung’s and Mari Holmboe Ruge’s immortal paper, ‘The Structure of Foreign News’, they employ the metaphor of a signal to describe our perception. Some signals, such as the cultural proximity of the news, make it easier for us to tune into it. Similarly, how much the event fits into our existing narrative or how unambiguous a new piece of information is also serve as strong signals.

Africa’s disasters may seem far to the Indian press (Sierra Leone got minimal coverage while Nigeria got none), and South Asia it seems was equally distant to Nigeria’s press (India, Nepal, and Bangladesh together got half the coverage Sierra Leone did). But the US felt culturally important to both. America’s soft power permeates across the globe in the form of Hollywood, TV shows, music, celebrities and its politics. We cheered in the time of Barack Obama and now despair in the time of Donald Trump.

These factors reflect the values that shape our news – geographical and cultural proximity, the need for surprise and novelty, the frame of our existing narratives and, overall, how we value different individuals around the globe.

But if we are to consider all lives equal, then paying equal attention is important.

Anushka Shah works as a researcher at the MIT Media Lab, Boston. This study was conducted using data from Media Cloud, an open-source media analysis platform developed by the lab in collaboration with the Harvard Berkman Klein Centre.