The Two Sides of Vajpayee's Poetry – Humanity and Hindu Pride

As a poet, Atal Bihari Vajpayee dreamt of an 'Akhand Bharat' and of conquering Gilgit and other areas to undo the Partition. But, the ultimate goal in which he believed and for which he worked all his life was not very different from that of the present rulers.

When I heard Atal Bihari Vajpayee for the first time, I was barely in my teens. It was a cold January night in the latter half of the 1960s and Indira Gandhi was the prime minister of the country. He reached my town Najibabad, located in the foothills of Garhwal, very late to address a public meeting that had been organised in Moorti Devi Saraswati Intermediate College where I studied. People in small towns usually go to bed early but the 200 odd people who had gathered to listen to Vajpayee did not budge. He was wearing a long overcoat and looked quite nattily dressed in comparison with the traditionally attired Jan Sangh leaders whom I used to see in my town. The moment he opened his mouth, there was a palpable wave of excitement in the audience that soon became absolutely spellbound.

Sometime before this, I had also attended a public meeting addressed by another Jan Sangh stalwart Deendayal Upadhyaya in the main market Chowk Bazar. His speech was drab and dull and party workers and sympathisers listened to him out of respect. But, Vajpayee was very different. Although, like Upadhyaya, his Hindi too was laced with a lot of Sanskrit words, but somehow this did not act as an impediment and he was able to strike an immediate rapport with the audience. By raising his voice and bringing it down like a consummate classical singer, placing emphasis on words to enhance the impact of his message and with a flow that reminded one of a cascading downpour, he turned the audience into putty in his hands.

After that, I heard him dozens of times. In fact, as JNU students, we campaigned for him despite our ideological differences when he contested for Lok Sabha from New Delhi constituency in 1977 post-Emergency polls. However, after I became a professional journalist, my interactions with him were rather limited as he was sulking at home while L. K. Advani had taken charge of party affairs.

It was probably the summer of 1989 when I received a message from my editor Vir Sanghvi (I was working with the news weekly Sunday at that time) that I should go to Atal Bihari Vajpayee’s house and collect some of his poems from him. When I went to his house at Raisina Road, facing the Press Club of India, I met a very different Vajpayee. He welcomed me with a warm and wide smile and within a few minutes, it became clear that Vajpayee took himself very seriously as a poet. Throughout this meeting, I felt that poetry was perhaps closest to his heart and he had accidentally strayed into politics.

A man steeped in traditional culture, he offered me tea and biscuits and recited three or four poems in his deep, resonant voice. His was the typical Kavi Sammelan style of reciting poetry but his enthusiasm was infectious. A line from one of those poems has stuck in my memory: “Doodh mein daraar pad gayee” (A crack is there in the milk). The poem was written against the background of Khalistani terrorism that was raging in Punjab at that time and Vajpayee was underlining the common heritage of the Hindus and Sikhs.

Later, when his collection of poetry Meri Ikyavan Kavitaen (My Fifty-one Poems) was published in June 1995, this line became the title of the poem and I noticed that Vajpayee had used it three times at the end of every stanza so as to emphatically make his point, just like a Hindustani classical vocalist who would use a tihai (repeating the same phrase thrice) to enhance the musicality of his performance. Just to quote a stanza:

(Why does blood turn white?

Unity is lost in discord

Martyrs are fought over, songs chopped off

A dagger pierces the heart,

A crack there is in the milk)

Atal Bihari Vajpayee’s grandfather Shyamlal Vajpayee was a Sanskrit scholar and father Krishna Bihari Vajpayee was an established poet of Brajbhasha and Khariboli Hindi. Atal Bihari also began to try his hand at composing verses using the traditional prosodic forms of ‘Saviayan’ and ‘Kavitta’. Later, he also became a popular Kavi Sammelan poet. Although in his early teens he became a member of the Arya Kumar Sabha, youth wing of the Hindu reformist organisation Arya Samaj, his family was devoted to the Hindutva ideals of the Rashtriya Swayamsevak Sangh (RSS). Therefore, he too joined it as a swayamsevak and remained one till the end of his life. 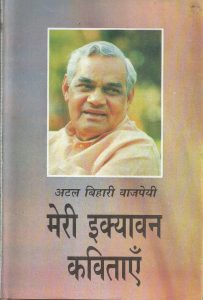 His oratory skills and literary talent drew the attention of the Sangh leadership and when it decided to bring out a magazine Rashtradharma, Atal Bihari Vajpayee was the obvious choice for its editor. Similarly, he became the first editor of the RSS Hindi organ Panchjanya when it began its publication in 1948. He also edited Hindi dailies Swadesh and Veer Arjun and literary journal Chetna.

After joining politics as a full-time worker, the poet in Vajpayee receded into the background and the world took notice of  his poetic personality when his book Kaidi Kaviray Ki Kundaliyan, a collection of his poems written inside the prison during the Emergency, was published when he had become the country’s external affairs minister in the Janata Party government headed by Morarji Desai.

Atal Bihari Vajpayee wrote two different kinds of poetry. In one, he comes through as a very sensitive, humane poet who has a tender heart and wants to express his experiences of love, longing, separation, compassion and universal humanity. In the other, he is a fiery Hindu leader who looks at everything with hurt Hindu pride and an intense desire for making “historic wrongs” right and taking revenge. What he wrote as a student of Class X remained his life-long motto: “Hindu tan-man, Hindu jeevan, rag-rag Hindu mera parichay” (My body and heart are Hindu, my life is Hindu, my entire existence is Hindu and it is my sole identity).

As a poet, he dreamt of an ‘Akhand Bharat’ and of conquering Gilgit and other areas to undo the Partition. His poem “Gagan mein laharta hai Bhagwa hamara” remembers the jauhar of Padmini and wants to see the Bhagwa flag being hoisted on everything. Being a moderate, his methods were different. But, the ultimate goal in which he believed and for which he worked all his life was not very different from that of the present rulers.